The elephant in the summit room

North Korea’s human rights record is among the world’s worst.

the issue with Kim? 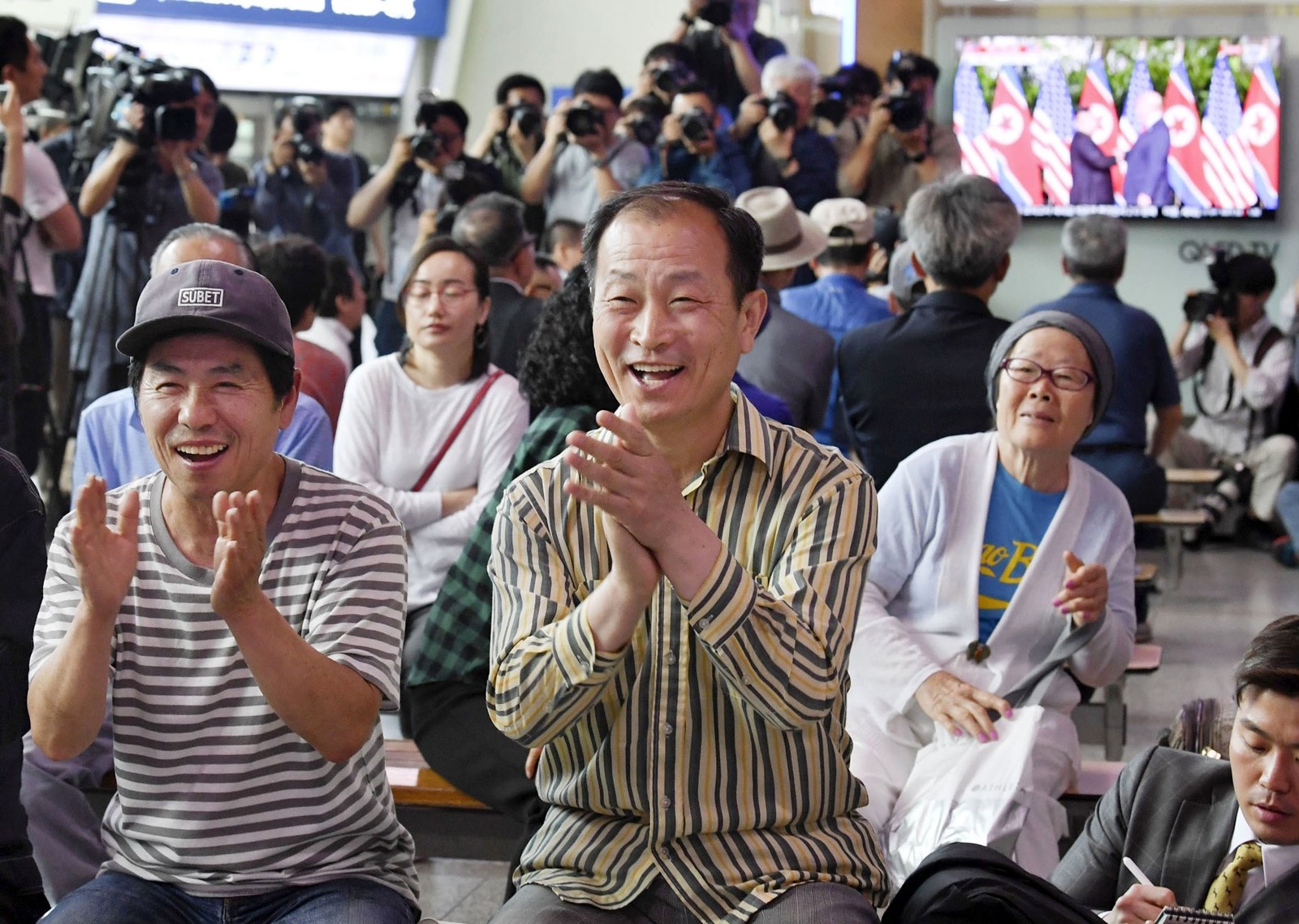 PEOPLE celebrate in Seoul as they watch President Trump and Kim Jong Un on TV. South Korea has advised against discussing human rights in the summit. ( Kyodo News)
PREVIOUS IMAGE

President Trump has called him a “very honorable” man. In meeting with North Korea’s Kim Jong Un in Singapore, however, the president comes face to face with an autocrat who has perhaps the world’s most egregious human rights record, with tens of thousands of political prisoners, systemic torture and assassinations.

Yet Trump refused to commit ahead of the summit to raising the issue. He’s not the only one willing to overlook Kim’s bloody record: The young leader is getting celebrity treatment from locals and leaders alike, with even Singapore’s Foreign Minister Vivian Balakrishnan tweeting a selfie of the two on Monday.

Although opinion is divided, numerous activists, officials and diplomats said that Trump’s avoidance of the human rights topic would not only be a mistake, it could possibly be illegal. In any case, the reception accorded the long-isolated Kim, who to date has ruled as a virtual international pariah, reflects how much Kim has gained already from Trump’s impulsive decision to give him an audience, the first ever between an American president and a leader of North Korea.

Under Trump, the State Department and America’s envoys around the world have often had to downplay human rights and other basic democratic values in dealings with authoritarian leaders.

Even so, the president has on occasion shown some knowledge of the situation inside North Korea, speaking last fall about the “horror” of life there and meeting in February at the White House with eight North Korean defectors. Last week, he promised Japan’s Prime Minister Shinzo Abe that he would raise the issue of Japanese citizens abducted by North Korea and held for decades.

It was not clear, however, that Trump would actually raise such issues once face to face with Kim.

“Trump has said all the right things about North Korea human rights. On the other hand, he has such a fondness for dictators, I don’t know which side is going to come out in Singapore,” said David Hawk, the author of several reports on the North Korean prison gulags, ahead of the meeting.

Greg Scarlatoiu, executive director of the Committee for Human Rights in North Korea, said the issue had too often been “sacrificed on the altar” of higher-priority nuclear and missile negotiations.

“For almost 30 years, human rights have been excluded from talks with North Korea that didn’t work. So how about giving it a try this time?” Scarlatoiu said. “Kim Jong Un seems to want security guarantees … but how can the U.S. or any other liberal democracy guarantee the survival of a regime that treats its people the way Kim Jong Un does?’’

The victims include his own family members: Kim has been accused of executing his uncle and other top aides with anti-aircraft artillery and of assassinating his half-brother by a nerve agent in a Malaysia airport.

More broadly, an estimated 100,000 political prisoners are held in fetid gulag-style prisons, “re-education” camps and forced-labor centers. Many are killed through torture or starved to death, according to defectors who have fled North Korea.

In this year’s human rights report by the State Department, North Korea stands out for the deplorable conditions described.

“Mothers were in some cases reportedly forced to watch the infanticide of their newborn infants,” the report states. Rape and other forms of torture, beatings and brutal interrogations were also common for people whose alleged crimes might have been nothing more than falling asleep at a political event or playing foreign music.

The North Korean people, the report said, also face “rigid controls over many aspects of [their] lives, including arbitrary interference with privacy, family, home, and correspondence, and denial of the freedoms of speech, press, assembly, association, religion, and movement; denial of the ability to choose their government.”

Some experts, as well as the government of neighboring South Korea, have counseled against raising human rights or any other issue not directly related to the nuclear arms that threaten South Korea’s very existence. They said “overloading” the agenda would be a distraction and slow down any progress.

Japan, on the other hand, is intent that North Korea be forced to account for its kidnapped citizens.

Trump and many Republicans railed against the multinational Iran nuclear agreement that President Obama brokered in 2015 because it failed to deal with human rights abuses and other behavior by Tehran. Some Republican lawmakers say there is no need to tackle human rights now with North Korea, though there are dissenters.

Sen. Orrin G. Hatch (R-Utah), writing for Fox News, said failing to link the issues of rights and nuclear disarmament would be a “moral and political mistake.”

“We also show a lack of seriousness about ourselves and our history,” Hatch added, “having faced but remained silent amid such crimes against humanity in the past.”

John Sifton, Asia advocacy director for the New York-based Human Rights Watch, argued that a 2016 law obliges Trump to discuss human rights in his meeting with Kim. The law imposes sanctions and blacklisting of any North Korean involved in weapons proliferation or who “knowingly engages in, is responsible for, or facilitates serious human rights abuses.”

Sifton also argued that, under the law, sanctions cannot be eased on Kim’s government until it changes its long-standing repression and draconian control of its people. That raises the question, how can the Trump administration offer North Korea private investment in return for nuclear disarmament moves if it’s illegal for U.S. companies to do business with North Koreans so long as the nation continues to violate human rights?

Past Republican administrations were able to address human rights while also negotiating tricky treaties. Abraham Cooper of the Simon Weisenthal Center, which advocates for human rights, noted that during Reagan-era talks about strategic arms reduction with the former Soviet Union, U.S. negotiators always brought up the subject of Jewish “refuseniks.”

“It is not like we can’t walk and chew gum at the same time,” Cooper said. “You can leverage human rights as a litmus test to determine their seriousness about disarmament.”

Kim Jong Un inherited the gulag system in 2011 when he took over after the death of his father, Kim Jong Il, but he has done little to nothing to dismantle the abuses of the system.

Although the current Kim has given his people greater economic freedom, he hasn’t loosened the restrictions on speech or civil liberties. North Koreans are still imprisoned for watching movies, making phone calls outside the country or trying to cross the border into China. They are not allowed to use the internet.

“I think Kim Jong Un’s formula is economic reform without political opening,” said Hawk, the expert on gulags. “Maybe in five to 10 years, if Kim Jong Un feels secure, he will allow more freedom, but I don’t think he is going to extend the rights to his people to have passports, to leave and return, like you saw with China and Vietnam.”

The biggest single issue is an extensive North Korean gulag believed to hold 80,000 to 120,000 men, women and children. The gulag’s population has fallen somewhat in the last decade because Kim Jong Il eased up on a system in which three generations of a family were punished for political crimes.