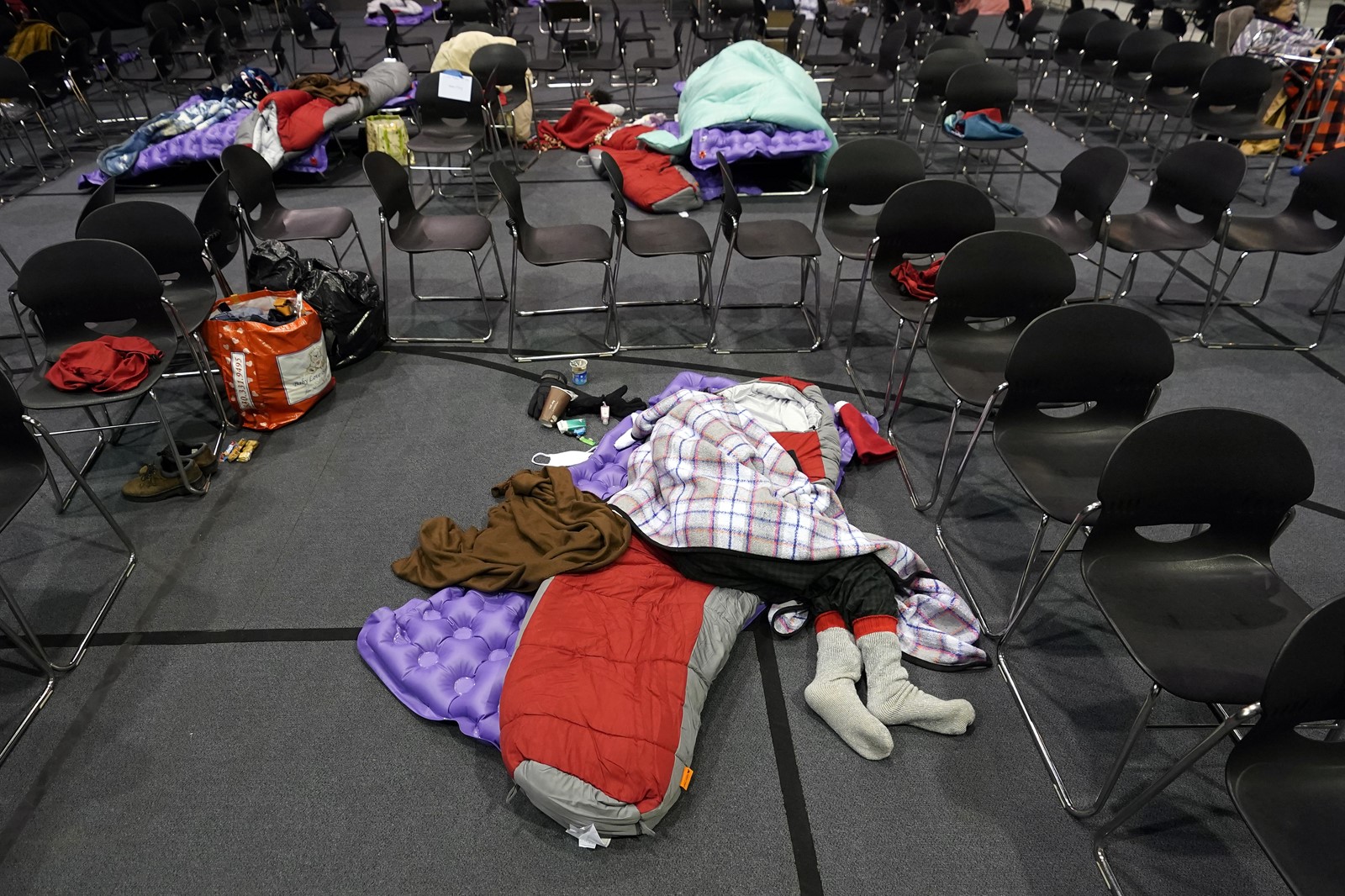 It wasn’t that long ago — just a few days and weeks, in fact — that some Texas political leaders were talking about the virtues of seceding from the United States.

At the end of January, a state legislator filed a bill aimed at creating a legislative committee by referendum “to develop a plan for achieving Texas independence.”

The measure quickly won the endorsement of state GOP Chairman Allen West, who said the measure aimed to give Texans “a right to voice their opinions on a critical issue.”

You may not hear much of this rhetoric at the moment. That’s because Texas’ need for assistance from outside its borders has reached a high level of urgency.

As many as 4 million residents, or about 15% of the state, spent much of the last weekend without electricity because the state’s power grid buckled under an onslaught of ice, snow and subfreezing temperatures. The agency overseeing the state’s power grid said Tuesday that it can’t predict when electrical service will be restored to all residents.

On Saturday, Gov. Greg Abbott appealed to President Biden for an emergency federal disaster declaration. Biden promptly delivered, freeing federal assistance to flow into the state by the billions of dollars (and without first insisting on an expression of personal fealty to the White House, unlike a former president I could name).

Let’s get a few things straight here. Since the extreme weather struck late last week, the people of Texas have suffered through harsh, life-threatening conditions through no fault of their own. Federal emergency aid and services exist precisely to respond to such a situation wherever in the 50 states it occurs.

We should all be grateful that the government is still equipped to render succor to Texans to deal with the hazards and vicissitudes of natural disasters, and we should join together in wishing the best for Texans — and residents of the many other states where the outbreak of severe weather over the last week or so has placed life and limb at risk.

Texas political leaders haven’t been above mocking other states, such as California, in their times of need. Here’s Sen. Ted Cruz (R-Texas) chortling over Gov. Gavin Newsom’s emergency appeal to Californians to conserve energy during a heat wave last August:

“California is now unable to perform even basic functions of civilization, like having reliable electricity,” Cruz tweeted on Aug. 19. “Biden/Harris/AOC want to make CA’s failed energy policy the standard nationwide. Hope you don’t like air conditioning!”

Of course no one can be surprised at Cruz exploiting the pain and suffering of others for shabby partisan gain. Nor should we expect his own constituents’ suffering to wipe the smirk off his face.

We might also point out that Gov. Abbott’s administration is spearheading a federal lawsuit aiming to overturn the Affordable Care Act on the shallowest imaginable grounds.

That would present a great potential disadvantage to some 133 million Americans dependent on the ACA’s consumer protections, including not a few Texas residents. (The Texas lawsuit won the endorsement of the Trump administration, but is opposed by Biden.)

The principle overlooked by Cruz, Abbott and the Texas secessionists is that we’re all in this together, and the lives and livelihoods of all Americans are enhanced and protected when all the states pull in the same direction instead of erecting walls at their state lines.

Red states, for some reason, seem particularly enamored of the idea that states with Democratic governments are all about squeezing the feds for all they can get, even though the truth is just the opposite.

For months, then-Senate Majority Leader Mitch McConnell (R-Ky.) fought pandemic relief for state and local governments on the claim that it would just be “blue state bailouts.”

In fact, McConnell’s state is the biggest freeloader on federal funds in the union compared with its contributions, pocketing $2.89 for every dollar it sends to Washington, according to the Rockefeller Institute of Government.

That brings us to Texas’ unique electrical grid, its origin in the state’s proud but self-destructive ethos of going it alone, and the consequences, now so apparent, for its residents.

Put simply, Texas decided back in 1935 to create a power grid entirely disconnected from any other state. The reason was that it wanted to evade regulatory oversight by the federal government.

As the late Richard D. Cudahy, a federal judge who had had a front-row seat at the subsequent legal fights over this decision, wrote in 1995, the Texas utilities’ “abhorrence of federal authority” prompted them to establish the state as a “bastion of impregnable isolation,” with the connivance of the state legislature.

As long as no Texas electricity was crossing the state line, the state’s grid remained outside federal jurisdiction, which applied only to interstate entities.

The eventual result was the creation of the Electric Reliability Council of Texas, or ERCOT, which manages the state grid. Federal regulators were always concerned that ERCOT’s self-reliance would leave it unable to “respond to events such as generating plant or transmission line outages,” which turns out to be true.

But even though some Texas electricity occasionally leaked over the border to Oklahoma and Louisiana, and ERCOT itself very occasionally bought emergency power from Mexican utilities, these incidents weren’t enough for the feds to declare the Texas grid an interstate entity.

The next element in the downfall of the Texas power grid was deregulation. Despite the example of California’s misadventure with electrical deregulation, which created the state energy crisis in 2000-01, Texas deregulated its energy market in 2002.

Henceforth, residents could contract for power with any retail provider opting into the deregulated market. The deregulation measure also rolled back electric prices by 6% from the pre-deregulation period. Retail providers wanting to grow market share would have to beat the new price standard.

This system produced two apparently contradictory results. Prices from deregulated utilities tended to exceed those from providers exempt from deregulation, such as municipally owned utilities and electric cooperatives.

According to the Texas Coalition for Affordable Power, which comprises dozens of municipalities, Texas residential consumers paid $22 billion more for electricity between 2002 and 2014 than they would have if they had remained customers of regulated utilities.

Indeed, by 2014, Texans in the deregulated zone paid more for electricity than the national average, and an average of 15% more than customers served by municipal utilities.

Yet the utility industry as a whole has found it hard to raise enough money to perform needed maintenance on its infrastructure.

“The ERCOT grid has collapsed in exactly the same manner as the old Soviet Union,” Ed Hirs of the University of Houston told the Houston Chronicle. “It limped along on underinvestment and neglect until it finally broke under predictable circumstances.”

The system was also beset by some of the same problems experienced by California, such as fraud and gaming of the market by sophisticated participants. (One firm at the center of these problems in both California and Texas: Houston-based Enron.)

No one should expect talk of a Texas secession — “Texit,” as some call it — to disappear entirely anytime soon. The idea is just too alluring for anyone convinced that the state’s issues can all be blamed on outsiders, whether they’re defined by race, creed or ideology. (And that’s leaving aside the conviction of some that the rest of the country would be better off if Texas did secede.)

Nor is it only in Texas that the dream of secession lives on; the notion of splitting off some or all of California from the rest of the U.S. bubbles up from time to time, though proposals to simply split California into several new states tend to appear more frequently.

But Texans shouldn’t overlook that in strictly fiscal terms they get more from the other 49 states than they contribute — $1.07 back for every dollar sent to Washington, according to the Rockefeller Institute calculations. (California’s balance of payments is almost dead even.)

What’s more important is that the nation as a whole stands ready to chip in when help is urgently needed, like now. We may not expect that Texan politicians will remember that when the immediate crisis is past, but we shouldn’t forget it when they balk at helping anyone else out.