to ignore journalist’s slaying angers Turkey, Iran and others. 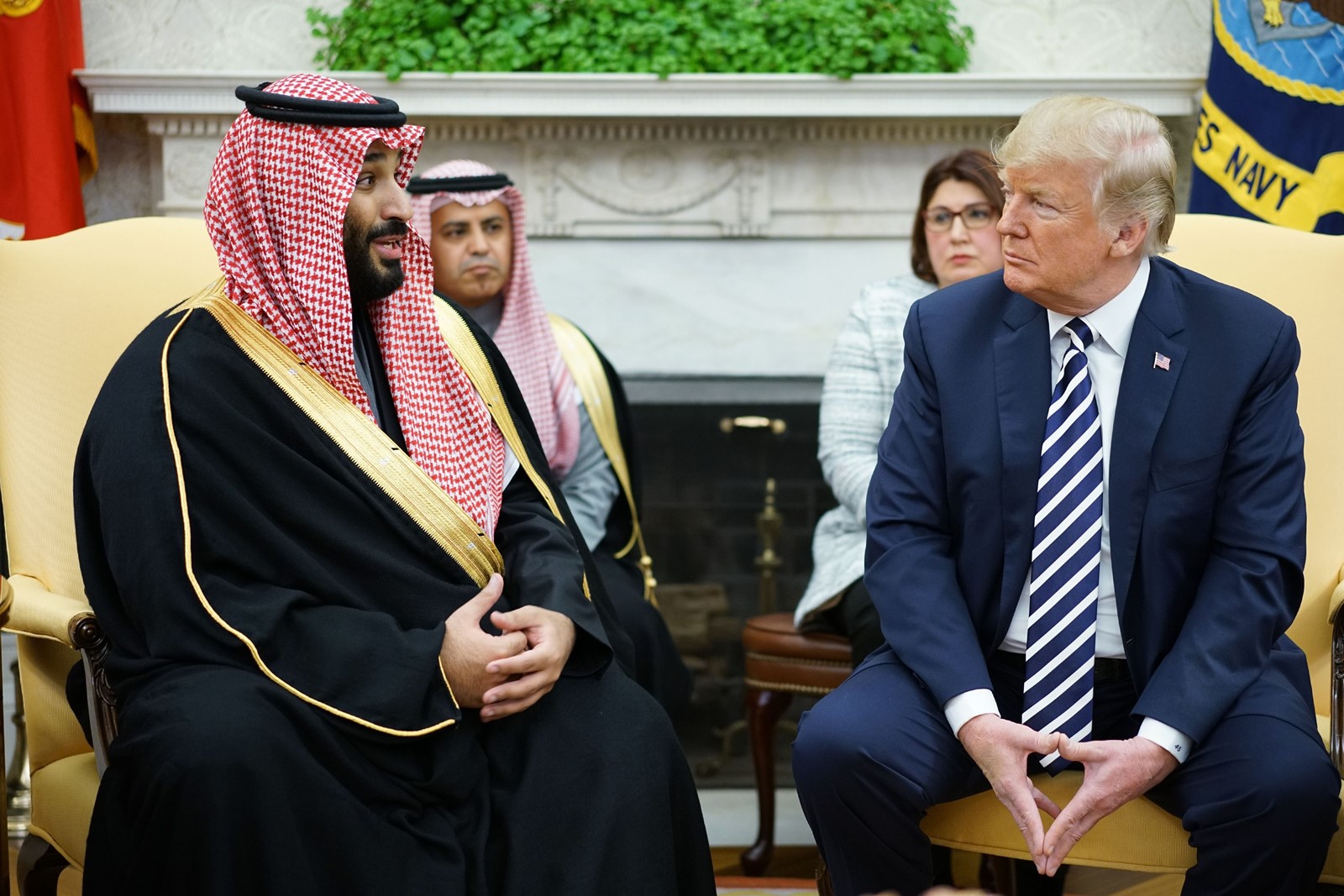 So read the front page of Okaz Online, the Saudi daily newspaper’s website, published hours after President Trump issued what amounted to a pass for Riyadh on Tuesday over the slaying and dismemberment of Saudi journalist and U.S. resident Jamal Khashoggi.

Trump’s statement — which excoriated Iran, exaggerated Saudi Arabia’s U.S. investments and only mentioned Khashoggi’s killing in the fifth paragraph — was celebrated in the kingdom.

In the 633-word statement, Trump cast doubt on the CIA’s reported high degree of confidence that Saudi Arabia’s de facto ruler, Crown Prince Mohammed bin Salman, ordered the journalist’s killing and sent his allies to the Saudi Consulate in Istanbul, Turkey, to carry it out on Oct. 2.

“He took the decision yesterday that the relationship with Saudi Arabia is a strategic one and that he wouldn’t let the tragedy of Khashoggi affect this relationship,” said Ahmad Farraj, a Saudi academic and commentator with the United Arab Emirates-based Trends Research and Advisory think tank.

Trump’s statement “proved he was a true, solid leader,” Farraj said in an interview Wednesday.

But Trump’s clear indication of his priorities infuriated other parties in the region, including putative U.S. allies as well as those who have looked to Washington to further human rights in the area.

Khashoggi disappeared after he entered the Saudi Consulate to get documents he needed to be married. Saudi Arabia’s story changed repeatedly, starting with the lie that the journalist had safely left the consulate and eventually acknowledging he had been killed and his body cut into pieces.

Turkey, a North Atlantic Treaty Organization partner of the U.S. already angered by the Trump administration’s moves in Syria, has pushed for an investigation that would punish all involved.

Such an investigation, Turkish officials contend, would have to implicate the crown prince. Saudi, Turkish and U.S. officials have said that members of the prince’s inner circle formed part of a hit squad dispatched from Riyadh to Istanbul.

For weeks, Ankara has complained of Washington’s stalling over addressing the prince’s role in the slaying. Trump’s sidestepping of the matter in his statement — “Maybe he did and maybe he didn’t!” — only added to Turkish officials’ frustration.

“It is not possible for an intelligence agency such as the CIA, which even knows the color of the fur on the cat walking around the Saudi Consulate’s garden ... to not know who gave this order,” Kurtulmus, deputy chairman of Turkish President Recep Tayyip Erdogan’s Justice and Development Party, told state broadcaster TRT Haber on Wednesday.

His comments followed those by Turkish Foreign Minister Mevlut Cavusoglu, who said he had raised in his meeting with Secretary of State Michael R. Pompeo the possibility of an international, possibly United Nations-led investigation into Khashoggi’s killing. Pompeo did not oppose the idea but urged Turkey to await the outcome of ongoing investigations, Cavusoglu said.

“This is a humanitarian issue. It concerns a murder. It is not possible to say, ‘Our trade will increase, let’s cover this up, let’s ignore it.’ ”

There was also anger from Iran’s leaders. Mohammad Javad Zarif, the country’s foreign minister, responded with a tweet dismissing Trump’s statement as “shameful.”

“Mr. Trump bizarrely devotes the FIRST paragraph of his shameful statement on Saudi atrocities to accuse IRAN of every sort of malfeasance he can think of,” he tweeted Tuesday.

Elsewhere, Trump’s message was seen as another example of the United States’ eroding role on the world stage as a champion for human rights and rule of law. Many saw his remarks as a brazen positioning of commercial concerns over broader ideals.

“It’s all about America First,” Trump said in the statement, which exaggerated the financial gains U.S. companies stood to earn from Saudi arms deals. He also linked his actions to oil prices, something previous presidents avoided doing, and lied about his personal financial dealings with Riyadh, saying falsely that he had no business investments in the kingdom. He previously boasted about selling millions of dollars’ worth of apartments to Saudis.

He also blamed Iran for the humanitarian catastrophe in Yemen, where tens of thousands have been killed and millions more face famine largely as a result of a Saudi-led blockade and air campaign against Iran-supported rebels.

Even some Republicans, such as Sen. Bob Corker of Tennessee, were appalled. Corker said he never thought he’d see a president “moonlight as a public relations firm” for Saudi Arabia.

Speaking Wednesday on the BBC, Corker said Trump’s remarks reflected a complete “lack of moral standing.” He said Trump seemed to be saying, “Lavish me with praise and money” and “we will turn our head” when it comes to killing a journalist.

President Obama continued backing Abdel Fattah Sisi after the Egyptian leader’s forces killed more than 800 protesters in 2013. And the late Iraqi dictator Saddam Hussein got arms and U.S. backing for years despite his unleashing gas attacks on his enemies.

Yet Trump’s message, whose second sentence said “the world is a dangerous place,” comes when many are accusing Saudi Arabia of increasing that danger, especially with its 33-year-old leader’s no-holds-barred approach to critics.

In the three years since his father became king, the crown prince has consolidated his influence by pushing out his rivals, blackmailing opponents and imprisoning activists.

“It reflects the mind-set of the [Saudi] government, the feeling they can do anything,” said Sarah Leah Whitson, executive director of Human Rights Watch’s Middle East and North Africa division, in an interview Wednesday.

Whitson added that some of those imprisoned face the death penalty. “What happens to them may be something that Trump’s remarks have a role to play in,” she warned.

“Rather than reining [the crown prince] in, Trump has given him the green light.”