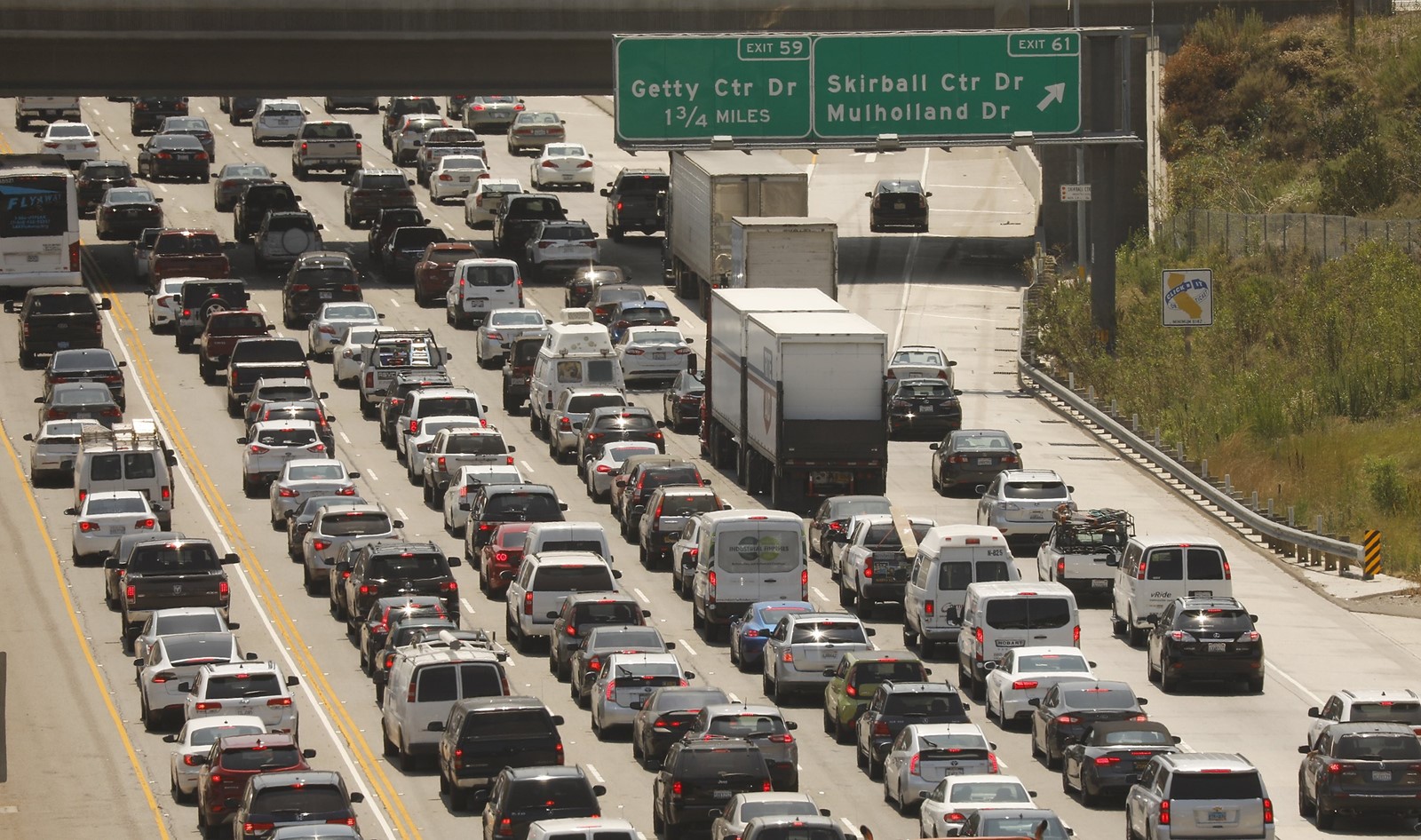 CALIFORNIA and 13 other states with stringent rules account for over a third of new vehicles sold in the U.S. (Al Seib Los Angeles Times)
PREVIOUS IMAGE

The Trump administration pushed ahead Thursday with plans to unravel the federal government’s most effective action to fight climate change — aggressive fuel economy standards aimed at getting the nation’s cars and trucks to average more than 50 miles per gallon by 2025.

After months of discussion and drafts, the Environmental Protection Agency and the National Highway Traffic Safety Administration formally unveiled their plan to rewrite those rules and replace them with some so lax that even automakers are wary.

The administration’s plan would freeze mileage targets in 2020 for six years. It would also move to end California’s power to set its own tougher greenhouse gas emissions standards and nullify the state mandate that automakers sell a specified number of electric vehicles.

EPA officials sought to portray the proposal as the administration’s opening bid in a negotiation with California. State officials, however, denounced the plan as too extreme and threatened to fight it in court. California and the 13 other states that follow its more stringent rules say the Clean Air Act empowers them to keep the Obama-era standards in place in their markets.

Together, California and the other 13 states account for more than a third of the new vehicles sold nationwide.

The rollback would undermine those states’ efforts to meet commitments the U.S. made in the Paris agreement on climate change. It would also worsen air quality problems in Southern California and other areas where officials are already struggling to clean smog and ease rates of asthma and other illnesses.

The administration asserts that the fuel economy rules should not be used to attempt “to solve climate change, even in part” because such a goal is “fundamentally different” from the Clean Air Act’s “original purpose of addressing smog-related air quality problems.”

Administration officials acknowledged that flat-lining fuel economy improvements would come at the expense of pollution reductions and public health.

“If we lock in the 2020 standards, we’re not getting as much emissions reductions as we otherwise would, and that translates into incrementally less protection of health and the environment,” said EPA Assistant Administrator Bill Wehrum, who oversees air and radiation issues.

“But balanced against that … we get substantial improvement in vehicle and highway safety,” he said. The administration argues that fuel economy and safety are inevitably in “tension,” as Wehrum put it. The Obama administration’s higher efficiency rules would raise vehicle prices and “restrict the American people from being able to afford newer vehicles with more advanced safety features,” they assert.

Environmental advocates and many outside scientists dispute that reasoning, pointing to extensive studies done during President Obama’s administration that found higher fuel standards could be achieved without compromising safety.

The EPA’s own scientists also have questioned the administration’s position. Wheeler, who took over the agency after Scott Pruitt resigned in early July, warned during recent internal debates that the evidence behind the proposal was questionable and might not stand up in court, administration officials have said.

The release of the administration’s proposal was repeatedly delayed in recent weeks as officials debated how aggressively to push. In the end, the White House approved taking a hard line.

California Gov. Jerry Brown vowed to push back, saying the state would fight the new plan “in every conceivable way possible.”

“For Trump to now destroy a law first enacted at the request of Ronald Reagan five decades ago is a betrayal and an assault on the health of Americans everywhere,” Brown said, referring to the Clean Air Act. “Under [Trump’s] reckless scheme, motorists will pay more at the pump, get worse gas mileage and breathe dirtier air.”

That combative stance seems likely to have broad support in the state. For example, Brown’s Republican predecessor, Arnold Schwarzenegger, who has championed efforts to combat global warming, blasted in an online post “fake conservatives” who “believe in states’ rights to make their own policies — as long as state policy is to pollute more.”

By contrast, the Trump administration’s internal tensions were on display during a call with reporters Thursday as transportation officials steadfastly defended the proposal while the EPA emphasized that it was not final and that a compromise with California and the auto industry could be reached.

“There’s nothing about how greenhouse gases and potential climate change affects California that’s any different than any other state in the country,” Wehrum said, adding, “There’s no justification for California to have its own standards.”

But he left room for compromise: “Having said that, this is just a proposed rule, and on the other hand we are committed to working with California to try to find a mutually agreeable set of regulations.”

The California Air Resources Board will submit comments on the proposal but has no meetings planned with the administration, a spokesman said.

California Atty. Gen. Xavier Becerra said the state would “use every legal tool at its disposal to defend today’s national standards and reaffirm the facts and science behind them.”

The prospect of an extended legal fight has discomfited automakers, who had asked the administration to relax the Obama-era rules but don’t want to see the U.S. market split in two, with different models of cars required in blue and red states.

In letters to Brown and Trump, the Alliance of Automobile Manufacturers and the Assn. of Global Automakers, the industry’s two lobbying groups, repeated their desire for changes in the Obama-era rules but notably did not endorse the administration’s proposal to freeze the fuel standards in 2020.

The groups urged both sides to negotiate. “In our eyes, a negotiated settlement is preferable to a bifurcated system and years of litigation,” they wrote in the letter to Trump.

Vehicles are the single largest source in the U.S. of emissions that cause global warming, recently surpassing the electricity sector. The plunge in natural gas prices and other market forces have steadily lowered utilities’ impact on the climate, but transportation is proving more stubborn. Electric cars and trucks still account for a tiny fraction of those sold, and driver preference for SUVs, along with relatively low gas prices, have inhibited progress.

The existing federal fuel economy targets, which were championed by California, ensure automakers keep moving toward higher-efficiency vehicles, as other nations also require. Those rules require automakers to meet fleet-wide averages of more than 50 miles per gallon by 2025, which when factoring in credits and other flexibility options translates to about 36 mpg in real-world driving conditions.

In comparison, the Trump proposal would freeze real-world fuel economy at about 30 miles per gallon, according to projections by the Rhodium Group, a research firm that tracks the progress nations are making in meeting climate goals.

The emissions impact of freezing those targets, as the administration favors, could be enormous. Official projections show the plan would increase daily fuel consumption by 2% to 3%, or about 500,000 barrels per day, increasing greenhouse gas emissions and contributing to the rise in global temperatures.

The Bay Area firm Energy Innovation, which models the environmental impact of energy policies, projects the proposal would increase U.S. fuel use 20% by 2035. The firm projects the policy would cost the U.S. economy $457 billion and cause 13,000 deaths by 2050 as air quality suffers.

The administration projects the efficiency rules would drive up the price of cars enough to push some buyers out of the market, leaving them to remain in older vehicles lacking life-saving new technologies like assisted braking and blind-spot warning. Flat-lining emissions standards, officials contend, would allow the auto industry to sell cars at lower prices, resulting in an additional 1 million new vehicle sales over the next decade.

The argument may prove a tough sell in court, where attorneys for states and environmental groups will come armed with a wealth of data undermining it.

“The fleet of new vehicles today is the most fuel-efficient ever, and they have gotten safer every year,” said Luke Tonachel, director of clean vehicles and fuels at the Natural Resources Defense Council. “These arguments are not new. They have failed before.”

Federal data show the increased cost consumers would pay for the more-efficient vehicles is dwarfed by the amount of money they would save at the pump, undermining the argument that drivers will stay in older, unsafe vehicles, advocates for the tougher rules say.

Trump administration officials conceded Thursday that labor, parts and other costs — not fuel economy rules — are the main reasons cars and trucks are getting more expensive.

Automakers themselves have also confirmed that they can build lighter cars to meet tougher emissions standards without sacrificing safety, UCLA environmental law professor Ann Carlson wrote Thursday. “The arguments about cost and safety are makeweights designed to provide cover for a proposal that is likely to be struck down in court.”

At a May meeting at the White House, auto firms appealed to Trump to tap the brakes on the administration’s aggressive rollback plan. He assured them he would, ordering his EPA chief and Transportation secretary to try to broker a deal with California.

Those negotiations have gone nowhere. California is confident the administration has no legal authority to revoke the waiver the state has been granted under the Clean Air Act allowing it to keep the Obama-era rules in place. In May, California and 16 other states filed a preemptive lawsuit arguing the rollback would be illegal.

“There is no precedent for revoking California’s waiver,” said Dan Becker, director of the Safe Climate Campaign of the Center for Auto Safety, an advocacy group in Washington. “There is no provision in the Clean Air Act for revoking a waiver.... The world is looking to California to hold its ground.”