The struggle to decode Trump 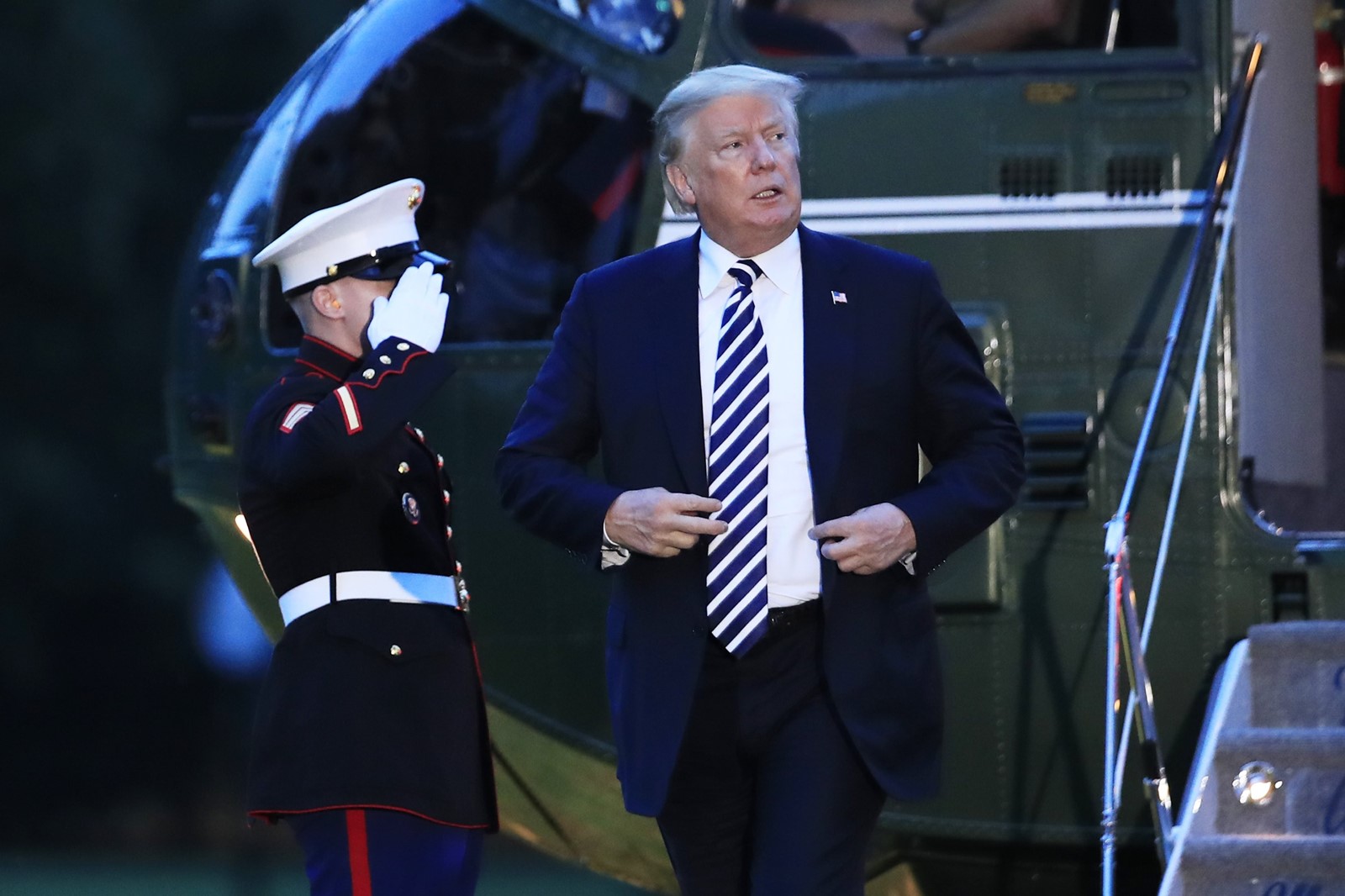 THE PRESIDENT’S unvetted messages are behind much of the chaos in his administration, observers say. (Manuel Balce Ceneta Associated Press)
PREVIOUS IMAGE

When President Trump threatened to take action against Google last week unless it altered its search engine to show more positive news about him from conservative sites, even his aides were flummoxed.

Was Trump proposing to regulate the internet, threatening to launch an investigation into one of the world’s biggest companies, or simply venting about something he saw on Fox News? They couldn’t say.

Nineteen months into his presidency, confusion over how to interpret Trump’s pronouncements has only grown as his impulsive tweets have increased to match the mounting legal and political pressure on him. Nearly two years after Americans elected a man supporters lauded for “telling it like it is,” his audiences — including West Wing aides, reporters, lawmakers, corporate boards and foreign leaders — routinely struggle to understand exactly what the president is trying to say.

For aides scrambling to figure out whether a statement or a tweet is an order or an aspiration, questions abound: Is the president trying to shift the media’s attention? Sway public opinion? Send a signal of allegiance to supporters? Force his administration to reverse-engineer new policies from scratch?

“You know by the result,” is all that Hogan Gidley, Trump’s deputy press secretary, would say when asked how to divine the answer.

In other words, stay tuned, as Trump likes to say.

Cabinet secretaries and Republican congressional leaders have wishfully dismissed Trump’s more provocative pronouncements as bluster, or what House Speaker Paul D. Ryan (R-Wis.) recently called “trolling.” But that dismissiveness can backfire, as Ryan learned when Trump followed through on a statement the speaker had initially brushed off — revoking a security clearance for former CIA Director John Brennan and threatening the same action against other Trump critics who’d been national security advisors to Presidents Obama and George W. Bush.

Trump’s loose talk can be advantageous, galvanizing supporters and commanding media attention. Yet allies, current and former aides and political observers also say the steady barrage of unexpected and unvetted messages is to blame for much of the chaos in the administration. It has stifled the policymaking processes that guided past presidents, upending legislation and diplomacy, fueling divisiveness, rattling markets and providing fodder for endless controversy.

It’s not just Trump’s public communications that confound. Advisors say his utterances in private settings often are just as ambiguous.

“There are definitely times you come out of meetings and say, ‘How did you take that?’” said Marc Short, until recently Trump’s director of legislative affairs.

Such confusion has allowed advisors to push their own agendas. A former White House official attributed one of Trump’s most-criticized policies — separating migrant children from their parents who cross the border illegally — to the administration’s hard-liners who took Trump’s harsh immigration rhetoric literally, rather than as venting over reports of migrant caravans on Fox News. Trump later reversed the policy after a bipartisan backlash, but hundreds of children remain separated from their parents.

Some allies press to surround Trump with advisors who know him well enough to talk him down, distract him or even ignore him.

Implicit in associates’ approach to Trump is a recognition they can’t change him and the brash, hyperbolic style that was a hallmark of his careers in real estate and television.

“He would go off and do damage, and we would do damage control,” said Barbara Res, a top executive with the Trump Organization in the 1980s and ’90s. “We would warn him not to say things, and he would say them anyway.”

Res said that employees often would ignore Trump’s demands, believing he was merely venting or making sure someone else was to blame for mistakes or failure. Or they would come up with an alternative, then try to convince Trump that it was his idea.

She recalled that when they were building Trump Tower in Manhattan, Trump demanded changes to the finishes on the columns, hoping to make the marble appear thicker. That wasn’t feasible, Res said, so she ignored the order. An architectural review later singled out the columns for praise, sparing Res further wrath.

The stakes are far bigger for a president dealing with North Korean nuclear threats or economic policy. That’s one reason previous presidents have been more careful with their words and willing to embrace a more disciplined decision-making process.

Typically, the White House chief of staff designates the appropriate staff experts to bring options to the president. After he’s made a decision, aides draft talking points for the president and his team to unveil the policy to the public.

Trump has turned that dynamic on its head. Especially when he feels aides have stifled his instincts, he’s fired off tweets — like the one last year ordering the military to reimpose its ban on transgender soldiers — or ad-libbed from his speech text, like when he announced he would be forming a “space force” as a new, sixth branch of the military, over Pentagon resistance.

Trump has also called on Sessions to end the investigation into Russian election meddling and the president’s potential obstruction of justice. But White House Press Secretary Sarah Huckabee Sanders has said that Trump is simply expressing his opinion, not issuing an order.

Leon E. Panetta, who served as chief of staff and budget director for President Clinton and as CIA director and Defense secretary to President Obama, said Trump’s style is no surprise.

“It’s the way he operated as a New York developer, and it’s the way he’s operating as president of the United States, which is to disrupt, roll grenades into a room and blow things up and not have any particular strategy for how that disruption can be resolved,” Panetta said.

When Trump’s current chief of staff, John F. Kelly, called Panetta seeking advice about the job, Panetta said he told him that a coherent policy process was paramount. Kelly has tried to follow that advice, but the impetuous Trump has frustrated him.

Chris Whipple, the author of “The Gatekeepers: How the White House Chiefs of Staff Define Every Presidency,” said Kelly’s job “has proved to be mission impossible.”

“I don’t see any likelihood anyone else could do it effectively, because this is someone for whom discipline and process is anathema,” Whipple said of the position and this president. “Nixon at his most unhinged would never in a million years say out loud the things Trump tweets every day.”

Some tweets result from conversations with old friends and advisors whom Trump calls from the White House residence in the evening, after Kelly has gone home. Those confidants egg him on, some aides believe.

Longtime advisor Roger Stone, for one, said he had been urging Trump to be more aggressive and push back against his more cautious aides, including by getting rid of Sessions.

Stone said that because Trump’s lawyers warn that firing Sessions could be seen as obstructing justice, the president is trying to stoke outside pressure on Sessions to quit. “He’s trying to make it happen through public opinion as opposed to through his own authority,” Stone said.

Stone’s own advice is blunt: “Don’t demand that Jeff Sessions do something. Order him to do it.”

Trump’s threats to take action often are not idle. He did order Brennan’s security clearance to be yanked and has pushed Sessions to open inquiries into FBI actions early in the Russia investigation.

Corey Lewandowski, Trump’s first campaign manager, believes Trump’s tweets and statements should be viewed as a signal of what the president wants to have happen, even if they’re not followed by immediate action.

But Lewandowski chose to act: “When [Trump] asked for something to be accomplished, I always took it very literally and tried to execute it because I knew he was not going to forget in two weeks or a month.”

Trump has followed through on controversial promises, notably withdrawing the U.S. from multilateral agreements like the Paris climate accord and the Iran nuclear deal and moving the U.S. Embassy in Israel from Tel Aviv to Jerusalem.

“He more often than not tries to do the thing he mentions in his tweets,” said Tony Fratto, who served as deputy White House press secretary under George W. Bush. “I don’t know why people keep saying he’s just trolling or blowing off steam.”

Even so, the financial markets have learned to treat Trump’s words selectively, ignoring some statements while taking others seriously. His seemingly offhand threat during a recent political rally to impose tariffs on foreign automobiles, for example, was all but ignored, while other trade threats have caused markets to swoon.

Nicholas Bloom, a Stanford economist who has followed the fluctuations, said that while Trump is more often ignored than his predecessors were, his rhetoric has caused more market ripples in his second year than in his first. That’s largely because more policy has followed, beginning late in Trump’s first year with the signing of the tax cuts law, and extending into the more recent trade skirmishes with China, Canada and Europe.

“Decoding Trump is like analyzing North Korean media: Most of the statements are meaningless propaganda, but there are a few nuggets of information in there,” Bloom said.

Trump’s remarks at political rallies are taken less seriously than comments from the White House, he said.

“Much of his talk, though, is mood music,” Bloom added. “He had been promising a trade war with China since the election, but the markets got spooked when the frequency of tweets and comments went from weekly to daily.”

For all the confusion, one thing has become clear: Trump’s pronouncements, by their unpredictability, frequency and their many falsehoods, have diminished his capacity to speak convincingly to the country in times of national emergency.

“He’s been extraordinarily lucky so far that he hasn’t been tested by a major crisis not of his own making,” Whipple said. When he is, Whipple added, he’ll have “absolutely no credibility.”