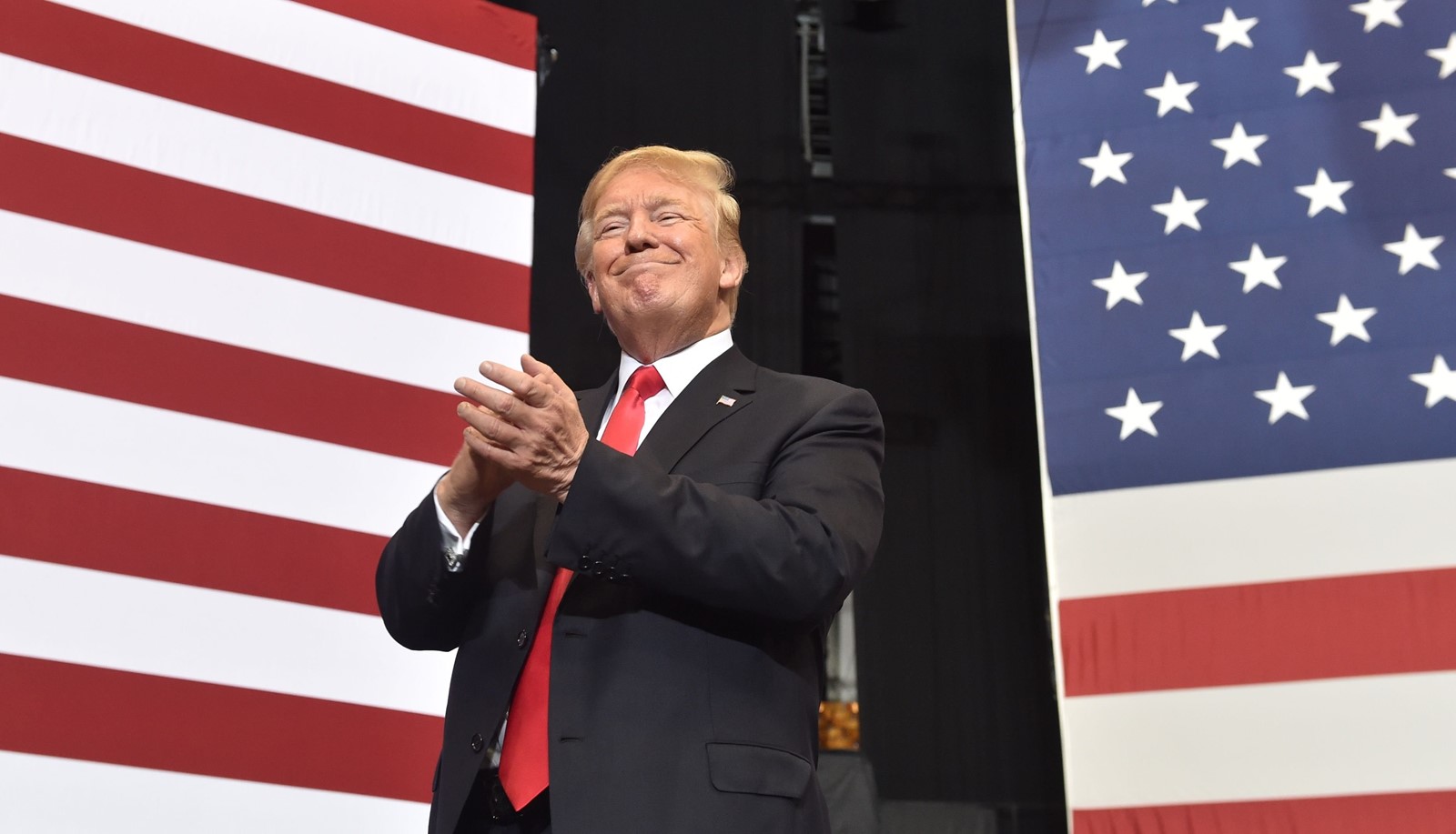 Asked on Monday, President Trump’s 500th day in office, what he considers his top foreign policy achievement, Press Secretary Sarah Huckabee Sanders quickly replied: “The strengthening of relationships with a number of foreign leaders.” The State Department said the same with a tweet: “After 500 days in office, U.S. leadership is back on the world stage as the result of @POTUS’s policies.”

It’s no surprise that top administration officials have alighted on that claim. The president has been making it at every opportunity — during a rally last week in Nashville, at the U.S. Naval Academy commencement ceremony and in off-the-cuff remarks to White House reporters Friday, just to name the latest audiences.

The evidence — both in nonpartisan polls and in the increasingly critical remarks of exasperated allies — suggests otherwise.

The president’s bravado is about to be tested dramatically, beginning with a visit Thursday from Japan’s President Shinzo Abe. On the weekend, he is to attend a summit in Canada with other leaders of the G7 — the Group of Seven major powers — and then hold the most high-stakes event of all on Tuesday — his meeting in Singapore with North Korean leader Kim Jong Un.

After 16 months, however, leaders of long-standing allies like Abe, France’s President Emmanuel Macron, Germany’s Chancellor Angela Merkel and Britain’s Prime Minister Theresa May — all initially deferential to Trump and his famous ego — have grown frustrated and at times disapproving.

Significantly, so have their citizens, increasing the pressure on foreign leaders to distance themselves from Trump’s America. Across 134 countries, the median approval of U.S. leadership dropped 18 points in Trump’s first year, to a record low of just 30%, according to a Gallup survey released in January. That was before Trump’s decisions to withdraw from the Iran nuclear deal and impose tariffs on a number of allies, which further alienated many of them.

The finding echoed a Pew Research Center survey last year that found in all but two of 37 nations polled, Trump got far lower marks than President Obama; the exceptions were Russia and Israel.

“In the main, it’s a preposterous claim to say the U.S. is better regarded in the world when we haven’t had for many decades this many crises with our allies,” said Nicholas Burns, a career diplomat under several presidents — serving as ambassador to NATO and Greece and as undersecretary of State — and now a professor at Harvard’s Kennedy School of Government.

Japan’s Abe, who initially worked to build warm personal relations with Trump, comes to the White House vexed by the president’s protectionist trade moves and failure to inform Japan, a close ally, when Trump scheduled, canceled and then rescheduled his summit with North Korea’s Kim.

“Instead of demonstrating solidarity, Japan has been cut out,” said Jeffrey Hornung, an Asia specialist at the Rand Corp. “You have Japan being left to the side.”

Like Abe, the other world leaders Trump will meet in Quebec at the annual G7 summit have become dismayed that their attempts to flatter and cajole him have gone for naught.

Interviews with a dozen diplomats and foreign policy experts, some of whom requested anonymity to speak openly due to the sensitivity of the issue, underscore the widespread consternation with a seemingly incurious and blustery president. Trump, many complain, has continued to show a basic misunderstanding of NATO financing, the European Union and the fundamentals of international trade, among other issues.

“The president’s inability to absorb information, combined with his certainty about the world and these things he doesn’t really understand — it’s doing a number on how other countries view the United States and our ability to get things done around the world,” said a former U.S. ambassador.

“We are starting to see a breakdown of the system,” said Heather Conley, senior vice president and director of the Europe program at the Center for Strategic and International Studies. “It feels like we are treating our allies with contempt, while we are feting our adversaries.”

“After a year and a half, I think most of the major allies have concluded that, to be honest with you, there really isn’t a relationship that they can build,” Conley added. “Or they can build it, like President Macron has, but it does not necessarily mean that there is going to be outcomes that ... support the national interests of our European and Canadian allies.”

And Trump risks losing international support for initiatives he considers important, she said, such as a potential deal with North Korea.

To the extent that foreign leaders like Macron are seen as giving in to Trump, “that’s very unpopular at home for many of these leaders,” said Stephanie Segal, a fellow in political economy at the Center for Strategic and International Studies.

Although Trump quickly withdrew from the Paris climate accord and the Trans-Pacific Partnership trade agreement, he showed some hesitation last year to follow through on other nationalist impulses, grudgingly recertifying the Iran nuclear agreement and holding off on abandoning NAFTA and imposing tariffs. That reassured many allies.

No more. Several so-called globalists have departed the administration, or been pushed out, leaving the president to follow through on campaign promises that upend the post-World War II global order that America helped build.

Last month, Trump withdrew from the Iran deal despite pleas from leaders of other countries that are party to it, most prominently Macron. Trump also oversaw the move of the U.S. Embassy in Israel from Tel Aviv to Jerusalem, inflaming regional tensions and angering allies who say Jerusalem’s status should be decided by the Palestinians and Israel.

Treasury Secretary Steven T. Mnuchin got an earful at a meeting of G7 finance chiefs last weekend. Canadian Prime Minister Justin Trudeau said Sunday on NBC that Trump’s tariffs were “insulting” to such a close ally and trading partner. Germany’s Merkel said they were illegal and could provoke retaliatory actions that “result in damaging everyone.” And Britain’s May, in a call with Trump on Monday, told him the tariffs decision “was unjustified and deeply disappointing.”

On Wednesday, Trump’s chief economic advisor, Larry Kudlow, dismissed the controversy as “a family dispute” that can be worked out. Yet he could not guarantee that Trump would sign the usual joint communique with the other G7 leaders.

“There was a hope in the first year that the president would be adaptive and learn on the job, that he would listen to his more moderate advisors, and in fact the reverse has happened,” Burns said. “He’s become more radical, and you see the frustration growing.”

Trump’s claim of newfound “respect” for America is apparently based on his belief that allies have long “taken advantage” of American largesse and military might, and that other nations now know he’s put an end to their game.

That attitude is rejected in most foreign capitals, who’ve looked to the United States to be the global leader for its own national interests as well as theirs. Now Washington is increasingly isolated, reflecting allies’ impatience.

William Reinsch, a fellow at the Center for Strategic and International Studies, said that while many allies have been “polite” thus far, they now think “time’s up.”

“They’ve been somewhere between bemused and frustrated for a long time,” he said. “Now you’re seeing frustration win out and you’re probably going to see more pushback.”

Trump’s unilateral actions have come to be seen not as part of an “America first” policy, but more like “America alone.” He has proven himself an unreliable partner, many allies say.

While allies have strongly disagreed with the United States in the past, for example when President George W. Bush invaded Iraq, they still agreed on the 70-year-old tenets of the global order. Trump challenges that.

At the United Nations General Assembly in September, Trump laid out a case for limited international cooperation rooted in the primacy of nationalism, an argument many diplomats found incongruous.

Although Trump’s summit with Kim is back on, his failure to warn South Korean President Moon Jae-in prior to calling it off rankled, as it did Japan’s Abe. Yet last week, even as he celebrated the summit’s revival, Trump told reporters that North Korea is “6,000 miles away,” saying the onus is on Japan and South Korea to police their nuclear-armed neighbor.

“This is a pattern of behavior that undercuts the interests of our closest friends, time and time again,” said Suzanne DiMaggio, a senior fellow at the New America Foundation. “And our friends are asking if this is an aberration or the new normal.”

As Donald Tusk, president of the European Council, put it last month, after Trump pulled the U.S. out of the Iran deal, “With friends like the United States, who needs enemies?”