Plowed under once again 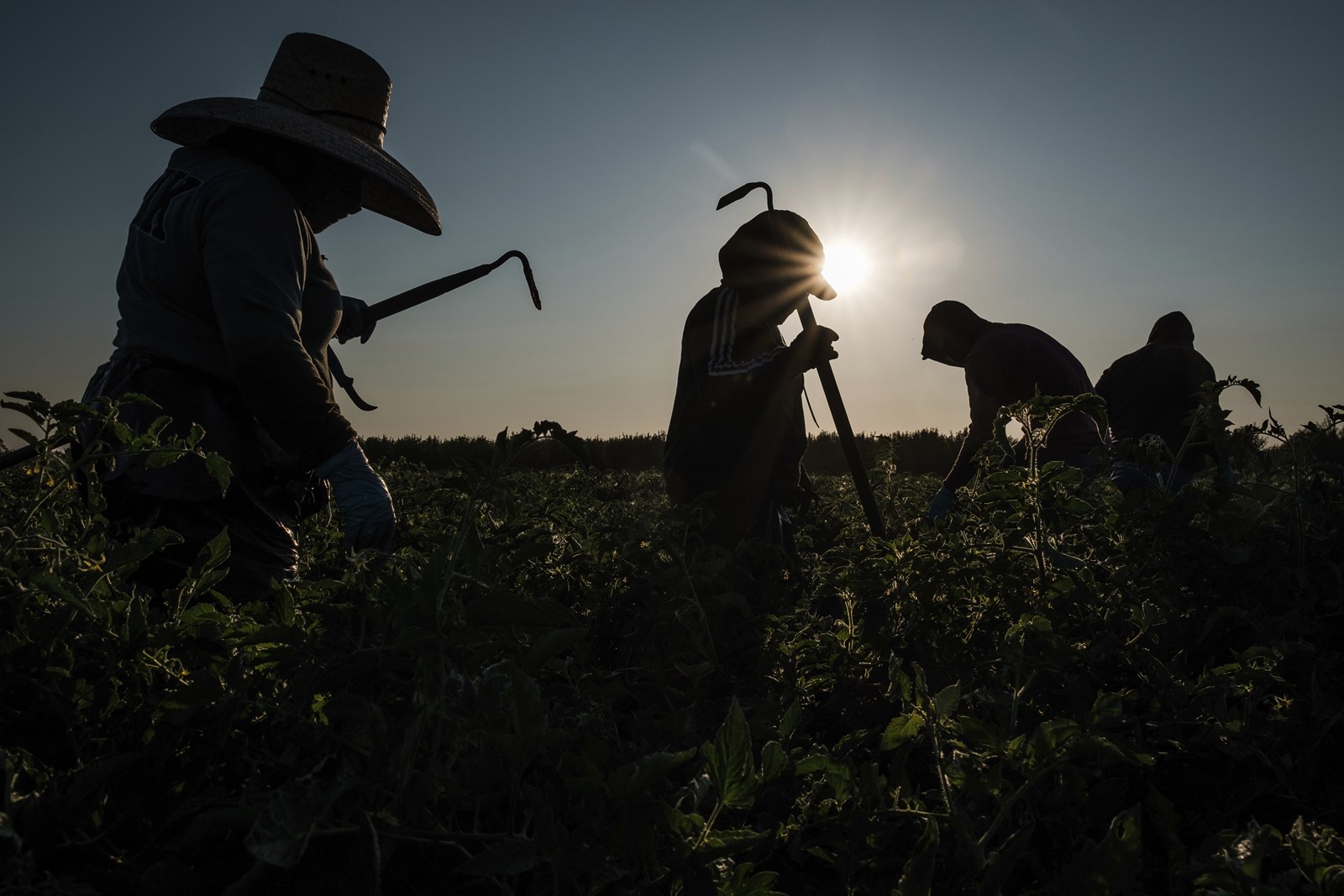 FARMWORKERS harvest tomatoes in French Camp, Calif., in the San Joaquin Valley. Advocates say they lack testing and access to care. (Photographs by Max Whittaker For The Times) 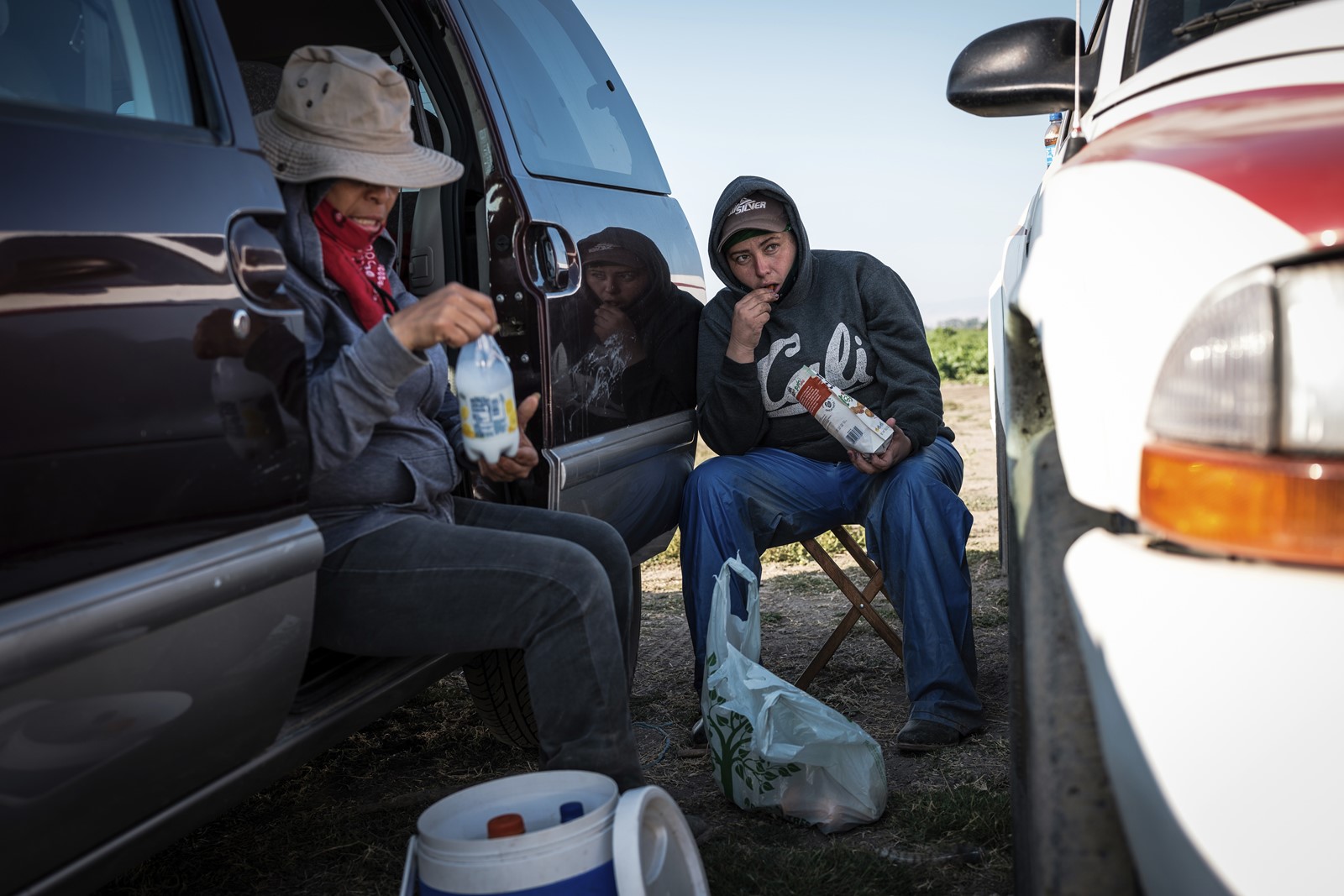 FARMWORKERS break for breakfast in French Camp. Latino residents make up 39% of Californians but account for up to 56% of coronavirus cases statewide. ()
PREVIOUS IMAGE

The coronavirus is spreading at alarming rates in California’s Central Valley, following a cruel and increasingly familiar path.

The demographics of those getting sick in the rural hamlets of America’s famed agricultural zone are the same as those who have been hit hard in big cities and suburbs: essential workers — many of them Latino — who cannot stay home for financial reasons when they fall ill on the job and also have a hard time isolating in housing that can be crowded and multi-generational.

Health officials and medical experts say the pattern of spread underscores the deep inequities of the coronavirus in California, which has infected Black and Latino communities and poorer regions at much higher rates than more affluent and white ones.

The surge in Central Valley cases has taken a particular toll on farmworkers, in part because they often live in close quarters, share transportation to job sites and have little access to healthcare. Gov. Gavin Newsom said Monday that the rate of positive coronavirus tests in the Central Valley ranges from 10.7% to as high as 17.7%. The state’s average is about 7.8% over the last seven days.

Increased rates of coronavirus transmission have also been seen in dense urban areas such as the Eastside and South and Central Los Angeles and San Francisco’s Mission District, all home to communities with large numbers of Latino residents who perform essential jobs critical in keeping California running, such as in construction, manufacturing and food preparation.

“These aren’t all people who live on big ranch houses on the farms. These are people who live in ... dense apartments,” said Dr. George Rutherford, a UC San Francisco epidemiologist and infectious disease expert. “I think it’s probably the same pattern that we see in the Mission District, of an essential workforce, which in this case is agricultural, who is densely housed, who gets exposed on their way to and from the work site or at the work site.”

Edward Flores, a sociology professor with the UC Merced Community and Labor Center, who has studied the impact of the pandemic on the Central Valley, said many of these laborers work in conditions that make true social distancing difficult and may be afraid to report safety problems for fear of losing their jobs.

“We hear about these huge outbreaks in meatpacking plants, in agriculture and these low-wage jobs, where people work side by side with other people in these very dense environments,” he said. “Stay-at-home orders do little for the low-wage essential workers that face the greatest risks.”

It shouldn’t be a surprise that places like the Central Valley would be hit hard. Among California’s meatpacking plants, the Central Valley as a region has had poor compliance with health and safety standards even before the pandemic hit, with the region home to nearly half of inspections triggered by complaints, even though it is home to just 13% of the state’s meatpacking plants, according to research by Ana Padilla, executive director of the Community and Labor Center.

Hundreds of workers have been infected at Ruiz Foods, a frozen-food packager in Tulare County, and Central Valley Meat Co. in Kings County.

California counties with a greater share of low-wage and crowded households have been more likely to be hit hard by the pandemic, according to a study by Flores and Padilla.

Epidemiologists also saw the disease spread in the agricultural Imperial Valley east of San Diego, “and it seems to have spread through the Coachella Valley and into the Central Valley,” Rutherford said. The highly contagious virus has continued to spread into the Salinas Valley and Northern California wine country counties of Napa, Sonoma, Solano, Mendocino and Lake, Rutherford said.

“This disease continues to grow in the state of California. It continues to spread, but not evenly,” Newsom said Monday while speaking at Diamond Nuts in Stockton. “It is disproportionately impacting certain communities and certain parts of the state.”

“We’re seeing an inordinate number of cases,” said Dr. Mark Ghaly, secretary of the California Health and Human Services Agency. The effective transmission rate of the disease in the region is as high as 1.4, meaning every person infected transmits it, on average, to 1.4 other people. “We have a great deal of work to do to get transmission rates down here in the Central Valley.

“Some of the regular hospital beds that we depend on for everyday care are filled up with COVID patients to the rate of 65%,” Ghaly said.

Mortality rates for the coronavirus are also higher in several San Joaquin Valley counties than in L.A. County, such as Stanislaus, Madera, San Joaquin and Merced.

Newsom said the $52 million he is asking the Legislature to approve for local public health departments in the Central Valley will come from $499 million in grants the state received from the U.S. Centers for Disease Control and Prevention. The governor said he wants to use the $52 million to improve “our isolation protocols, our quarantine protocols, our testing protocols and to enhance our healthcare workers by providing more support as well as more personnel” in the Central Valley.

Newsom said his targeted efforts will mirror those in Imperial County, which has been one of the state’s hardest-hit areas. The rural county, which borders Mexico and Arizona, has reported 688 new cases per 100,000 residents over the last two weeks; a month ago, that number was much worse: 1,173.

“We were able to make some improvement in terms of the transmission and spread of the virus by deploying a number of strike teams,” Newsom said.

Those strike teams were made up of state, federal and local personnel who worked to increase hospital capacity and reduce transmission through contact tracing and assisting with workplace outbreaks. The governor’s office said those efforts helped lower the number of new cases in recent weeks.

Juanita Ontiveros, an advocate with the California Rural Legal Assistance Foundation, called the governor’s actions “a good move” but said she believed additional aid would be needed in the future, especially as federal unemployment insurance benefits are set to expire this week.

She said she would like to see some of the money used for direct financial aid to affected workers. Ontiveros said many families in the valley have seen both parents laid off, sometimes at businesses that have closed with no plans to reopen as local economies buckle under the downturn.

“It’s never enough,” Ontiveros said. “You can see the stress and the worry and the agony in people’s faces, and especially when they hear the [unemployment insurance] is coming to an end. All of this is nightmarish to workers and their families.”

Geneva Moorad, who works at a nonprofit in Stockton and volunteers with immigrants, said she is concerned that not enough aid will reach the undocumented community, which has been hardest hit because those without legal status have trouble finding aid and may be fearful of deportation.

Moorad, who came to the U.S. from Panama and lived undocumented for many years, says there is great fear in the Central Valley right now around the consequences of seeking both medical and financial help.

“They are too afraid to ask for services,” Moorad said. “It’s so hard for me to believe that they are going to get that money.”