The L.A. Rams who integrated football 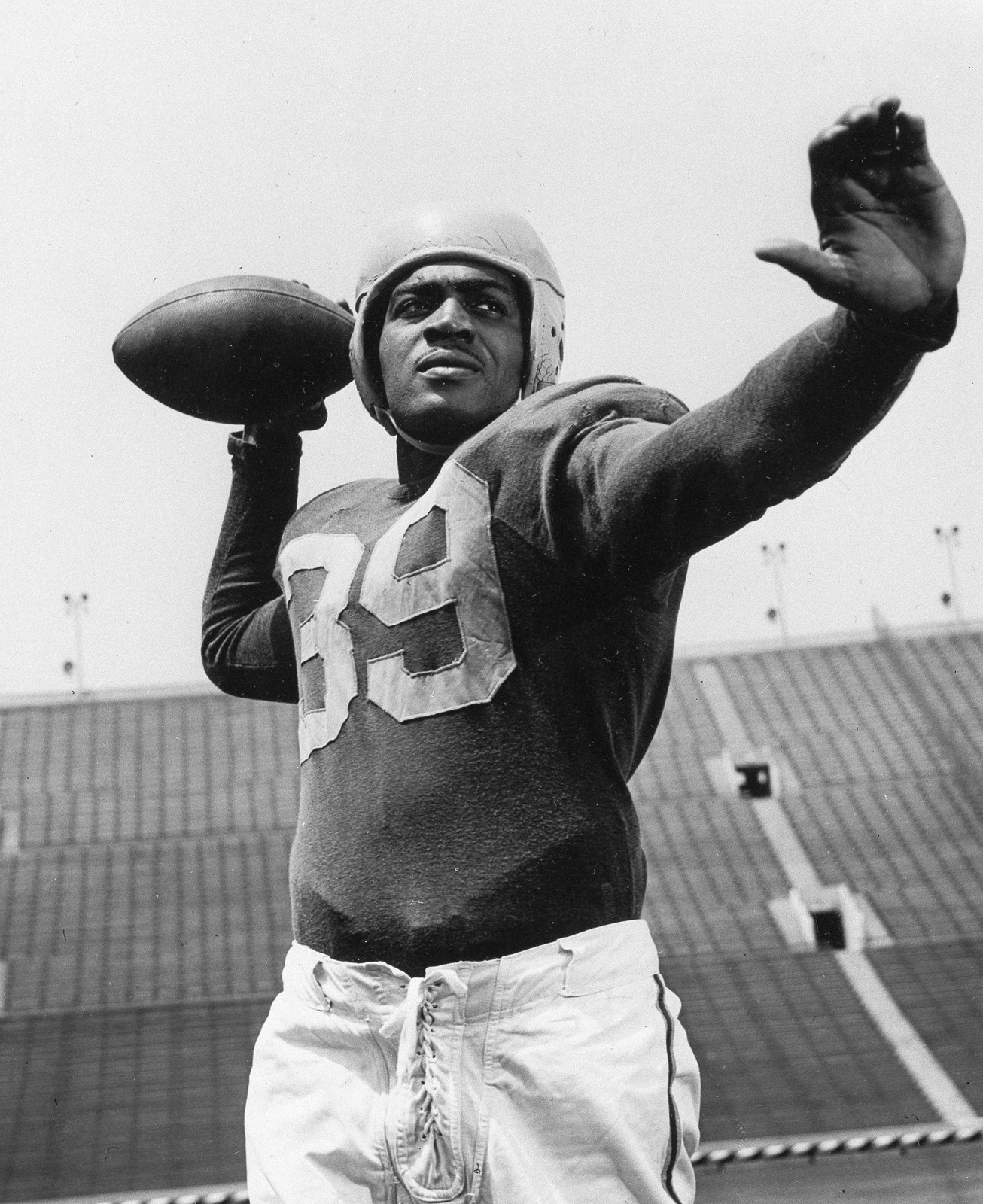 stories as warmly baked into America’s cultural mythos as the desegregation of baseball. Jackie Robinson is — deservedly — an American hero.

Yet the NFL too was once segregated. And the story of football’s integration, one year before Robinson joined the Dodgers, isn’t widely known. Neither are the brave men who endured hostility and humiliation to transform American sports.

It happened in Los Angeles.

In 1934, the NFL was far from the sports empire it is today. With dozens of teams scattered across the country, mostly in smaller markets, the league reluctantly featured a smattering of black players, if perhaps for no other reason than to fill their rosters.

But that year, in an effort to expand their fortunes, the NFL’s owners agreed to a secret pact to follow baseball’s model, expelling the few black players they had and refusing to sign new ones. This clandestine policy of segregation was rigidly enforced for the next 12 years — until March of 1946, when the L.A. Rams signed African American tailback Kenny Washington to the team’s roster, breaking with other owners and ending football’s apartheid.

This decision wasn’t a matter simply of doing the right thing, however.

The Rams had just moved to Los Angeles from Cleveland, after smelling dollar signs on the West Coast. They needed a home and wanted to play at the L.A. Coliseum. But the stadium was publicly funded — owned by taxpayers black and white alike — and black sportswriters in Los Angeles successfully hammered local officials into requiring the team to integrate if the Rams were to play there.

Washington was a 28-year-old LAPD officer at the time and recovering from multiple knee surgeries. But he had been one of the greatest players in college history while playing for UCLA several years earlier.

Washington, pursued by the Chicago Bears in 1939 but denied entry to the league because of his skin color, was the obvious choice to break the barrier.

Once signed, Washington was in for a fight. He would face racial hostility both from the crowds attending games and from opposing players. As Washington Redskins owner George Marshall explained in a 1942 interview trying to justify the league’s segregation, black players in the NFL would be up against “white players, especially those from the South, [who] would go to extremes to physically disable them.”

Their experience lived up to Marshall’s violent promise.

“If I have to integrate heaven, I don’t want to go,” is how Strode summed up the indignities of his NFL tenure.

The men, particularly Washington, thrived nonetheless. Despite being well past his prime, the tailback led the NFL in yards-per-carry during his first season, and his 92-yard touchdown run against the Chicago Cardinals remains the longest in Rams history.

And yet, despite their contributions to the game and the suffering they endured, Washington and Strode have been relegated to the back of history’s bus.

Neither man is in the Pro Football Hall of Fame. Neither has had his number retired by the Rams. Even Southern California has largely forgotten their legacy. When the Rose Bowl installed its first commemorative statue in 2017, it sculpted Washington’s UCLA teammate, Jackie Robinson, wearing a football uniform.

“History doesn’t know who we are,” Strode once complained, as true now as when he said it in 1971.

Of course in these hyper-partisan times, where even shaving products are ensnared in political controversy, honoring Washington and Strode now would sadly be interpreted by much of the country as a prod in the culture wars — a not-so-subtle extension of Colin Kaepernick’s protest movement. And, of course, the story of football’s desegregation shines light on a collective ugliness in our history that some Americans don’t want to think about — much less confront.

Yet even in our current climate, there are few characters more primed for universal acceptance. Washington was not, in today’s parlance, the social justice warrior that many would reflexively pigeonhole him. He was a Republican — a Nixon supporter, no less — not to mention a police officer. His heroism — and Strode’s — should be as integral and uncontroversial a source of civic, national and team pride as Jackie Robinson’s to the Dodgers.

The NFL is now 80% African American and the greatest show in sports. When the Rams take the field in Sunday’s Super Bowl to battle the Patriots, consider the two great Rams who paved their way — and tell anyone who will listen about a forgotten legacy that deserves to be remembered.