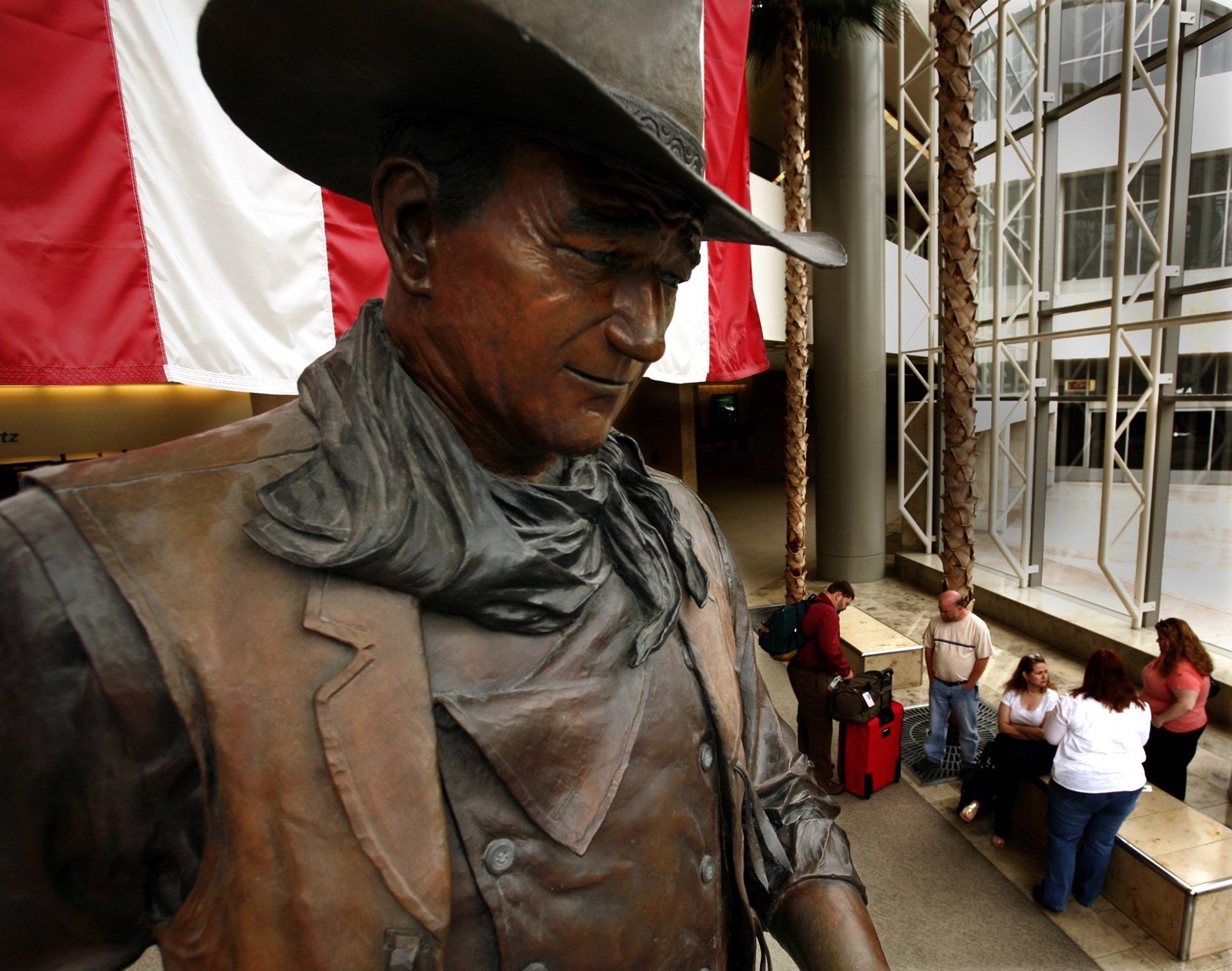 A STATUE of John Wayne stands in the concourse of the airport named after him in Orange County. There’s long been talk of removing his name from the facility. (Mark Boster Los Angeles Times)
PREVIOUS IMAGE

Most people familiar with the life story of John Wayne are aware that the late movie star was a dyed-in-the-wool right-winger — after all, he was still making a movie glorifying America’s conduct of the Vietnam War (“The Green Berets,” 1968) well after the country had begun to get sick of the conflict.

But the resurrection of a 1971 interview Wayne gave to Playboy magazine has un- derscored the sheer crudeness of the actor’s feelings about gay people, black people, Native Americans, young people and liberals.

This doesn’t necessarily mean that it’s impossible or immoral to enjoy westerns and war movies starring John Wayne; that’s a personal choice. But it certainly undermines any justification for his name and image to adorn a civic facility.

We’re talking about Orange County’s John Wayne Airport. It’s long past the time that Wayne’s name should come down.

This wouldn’t be the first time that the airport’s name has been the subject of debate. Orange County Supervisors pondered the issue in 2008, when local tourism officials expressed concern that the name failed to convey exactly where the airport is located. There may have been other occasions since 1979, when the supervisors christened the airport at the urging of Supervisor Thomas F. Riley.

Riley was an ex-Marine, but his rationale is lost in the mists of time. It may have had something to do with Wayne’s status as a rock-ribbed Republican conservative, which was Orange County’s self-image in that period.

But that Orange County no longer exists. That should be evident from the results of November’s election, in which voters turfed out the county’s last remaining GOP members of Congress — some of whom had embraced Donald Trump in a fruitless effort to save their careers — and elected an all-Democratic congressional delegation. Orange County today is such an economically and ethnically diverse community that it’s hard to justify asking any member of that community to board planes at an airport named after an outspoken racist and homophobe, with his strutting statue occupying a central niche in front of the concourse.

Wayne’s May 1971 Playboy interview has been unearthed before, notably in 2016 when his daughter Aissa endorsed Donald Trump for president. But it may well resonate more today, when iconic representations tied to racism, such as statues of Confederate war heroes, are being evicted from public spaces.

So let’s take a gander at some of John Wayne’s opinions, circa 1971. A typescript of the Playboy interview has been circulating widely and is the source of the quotes, but I validated it against facsimile pages from the original Playboy edition. Magazine writer Richard Warren Lewis conducted the interview at Wayne’s home in Newport Beach.

Wayne made these comments against a backdrop of generalized contempt for those he labeled leftists, socialists, and communists, without making much distinction among them.

Some of Wayne’s defenders have stepped forward to say it’s unfair to condemn an elderly man’s memory for a 48-year-old interview conducted during a very different era. In a statement issued Wednesday to Fox News, Wayne’s family says, “It’s unfair to judge someone on something that was written that he said nearly 50 years ago when the person is no longer here to respond.”

But that won’t wash. Wayne was a few weeks shy of his 64th birthday when the interview appeared in print. It was 1971, so the civil rights revolution had been going on for years; Martin Luther King Jr. had been assassinated three years before.

Wayne wasn’t expressing the tenor of the times — he was to the advances being won by African Americans through demonstrations and legislation. His words already were retrograde when they were uttered. Wayne wasn’t an old conservative who hadn’t yet been “woke”; he had seen the future, and it put him into a racist rage.

The family’s statement also refers to Wayne’s “continuing work to find a cure for cancer through the John Wayne Cancer Foundation and the John Wayne Cancer Institute.” It’s unclear what they mean. Both charities were founded after Wayne’s 1979 death when his family allowed his name to be used, apparently for fundraising; the institute is located at St. John’s Medical Center in Santa Monica. They may do good work, but it doesn’t appear that Wayne himself participated during his life.

Nor did he serve in wartime, despite his later flag-waving and Vietnam War-mongering. Wayne was 34 when the Pearl Harbor attack brought the U.S. into World War II, and reportedly dodged enlistment even in the documentary film unit headed by his mentor, director John Ford, which apparently irked Ford no end.

The city sued Orange County in the 1980s to block the airport’s expansion, eventually settling on noise abatement rules that remain in effect, more or less. These account for the biz-arre takeoff pattern experienced by departing passengers, which involves a sharp climb followed by a sudden cutback in engine power as the aircraft crosses over residential neighborhoods.

That leaves us with the question of why John Wayne’s name should be associated with any civic institution in Orange County, its airport or otherwise. He doesn’t appear to have been a major contributor to civic life in his home town or county; in 2016, when a GOP state assemblyman from Orange County tried to get the state to declare a John Wayne Day, he was rebuffed when legislators mentioned Wayne’s support for the House Un-American Activities Committee and the John Birch Society.

There surely are residents or natives of Orange County more deserving of having their name on the airport. (My vote would go to electric guitar pioneer Leo Fender, a native of Fullerton.) But the most appropriate choice might be the one proposed by those tourism officials in 2008. Just call it Orange County Airport.