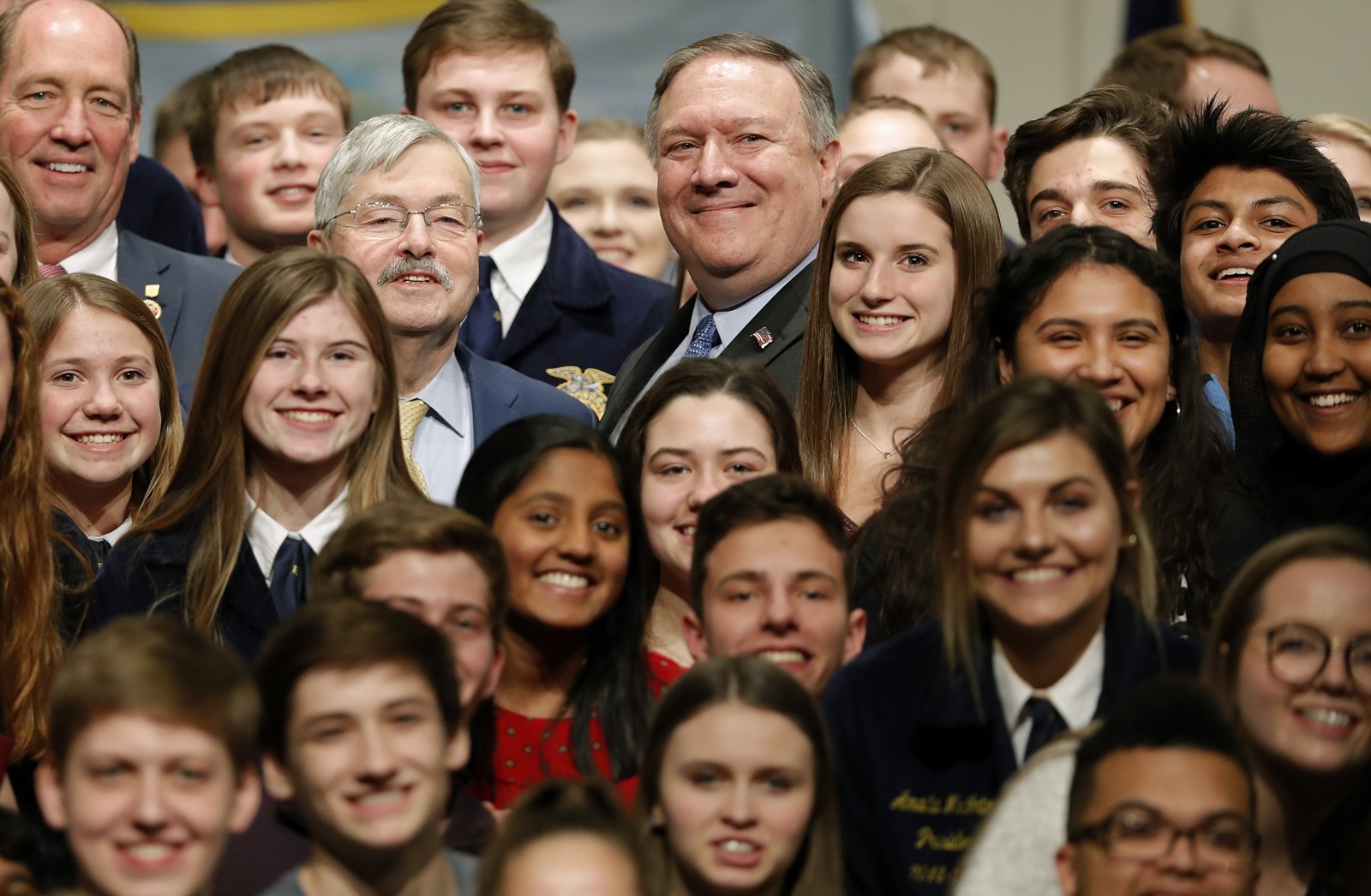 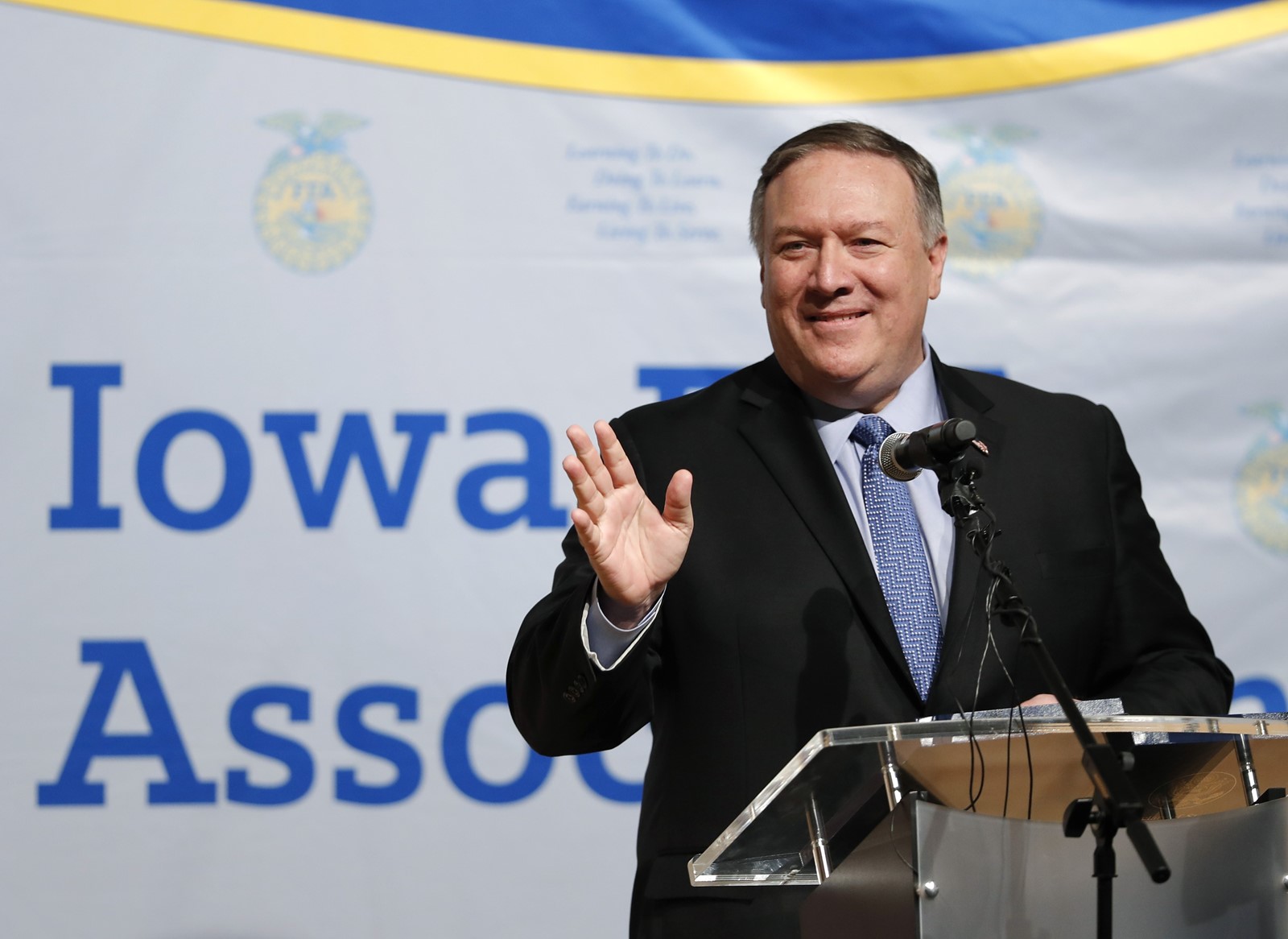 “I KNOW Iowa is not a foreign country,” Pompeo joked earlier this week at Johnston High School. ()
PREVIOUS IMAGE

It was just a couple of days after he’d left the nuclear summit between President Trump and North Korea’s Kim Jong Un after it collapsed in Hanoi, and where was America’s top diplomat?

On morning drive-time radio in Iowa.

Secretary of State Michael R. Pompeo had barely touched down at Joint Base Andrews from Vietnam after a diplomatic stop in Manila, when he boarded another flight — for Des Moines. Even the several radio and television interviewers he met with there earlier this week were a little surprised he had made the trip.

Pompeo alluded to the unlikely appearance when he opened his remarks to the Iowa branch of the Future Farmers of America.

“Some of you may not have heard of me before,” he said to laughter, then added: “I know Iowa is not a foreign country, in case some of you thought maybe I was a little confused.”

Pompeo described his visit as partly a mission to inspire people in fly-over country to become future diplomats. What was clearly more important, however, was the more immediate and politically charged part of his mission: talking about trade and reassuring an agricultural sector battered by President Trump’s trade war with China that everything will, eventually, be OK.

“We flew in last night, and believe me, it was a breath of fresh air to be out of Washington, D.C.,” Pompeo told the Iowa Farm Bureau in another appearance Monday. “And I know firsthand too how farmers are the backbone of America, how food security matters so much, and what you all do, the people of Iowa do, to help deliver that everyplace in the world.”

It is unusual — though not unheard of — for a secretary of State to spend as much time on domestic speaking engagements as Pompeo does, and even more unusual for the subjects to be domestic ones, in his case trade and farming. Those are matters normally handled by the Cabinet secretaries for Commerce and Agriculture, or the president’s trade representative.

Madeleine Albright, who was secretary of State in President Clinton’s second term, also did speaking tours in the U.S. She was primarily promoting internationalism, however, drumming up support at home for foreign policy and for cooperation among nations globally.

Pompeo, in contrast, has demonstrated he is looking inward while his portfolio is one that looks outward. Formerly a GOP congressman from Kansas, he is likely eyeing a return to politics, maybe even a presidential bid in 2024. He recently was urged by senior Republicans to run for the Senate, and considered it, but declined.

For now, then, Pompeo is among the most loyal members of Trump’s Cabinet, eager to do the president’s bidding in Kansas or Kuwait.

Later this month, he will deliver the keynote address for the State Department’s Road to the Global Entrepreneurship Summit Heartland Event in Overland Park, Kan. He has given several dozen interviews to local-level radio and television stations all over the country, sometimes by teleconference, and especially in the Midwest — while shutting out most Washington-based diplomatic correspondents.

Describing China as a duplicitous trading partner, Pompeo said, “This effort to get a full, comprehensive trade deal, is to fix that, to make it fair, to fix this historic wrong, and I am very hopeful in the coming weeks we’ll get that positive outcome.”

Over at WHO Radio in Des Moines, the hosts of the “Van and Bonnie in the Morning” show also welcomed Pompeo.

“Well, Bonnie, I always said it’d be a cold day when the United States secretary of State would call us and want to be on ‘Van and Bonnie in the Morning,’” co-host Van Harden said.

Pompeo gave them a similar pitch about Trump’s trade policies ultimately helping out Iowan and Kansan farmers, if they’ll just be patient.

“I do want to talk about agriculture, making sure that Iowa farmers and, frankly, Kansas farmers, too, have a chance to compete on a fair, level playing field,” he said.

Farmers in states that supported Trump in 2016, including Iowa, have been hit hard by the retaliatory tariffs that U.S. trading partners have imposed in reaction to the president’s tariffs on their exports. Trump’s trade war with China — previously soybean farmers’ main customer — has especially hurt U.S. agriculture, driving down sales and market prices. For the industry in the Midwest and Great Plains states, it’s the worst crisis since the 1980s — a worrisome fact for the administration.

Trump last year imposed levies on the importation of scores of Chinese products, such as TVs, chemicals, steel and solar panels. China retaliated by imposing tariffs on imports of U.S. agricultural commodities including soybeans, grain sorghum and pork. Soybean exports to China have plummeted by more than 90%.

Trump appointed Pompeo, formerly his CIA director, as secretary of State almost a year ago to replace Rex Tillerson, former chief executive of Exxon Mobil Corp., who frequently clashed with the president. Originally from California, Pompeo spent many years in Kansas and, while his business involved aircraft manufacturing, he makes frequent reference to time on a family farm.

Trump clearly relies on Pompeo, one of the few experienced politicians in his orbit, to perform many tasks. As the president has begun his campaigning for reelection, the secretary of State’s jobs apparently include allaying the concerns of Trump’s core supporters in rural America.

“We deliver consistent, stable, affordable, high-yield, high-quality food products all around the world,” Pompeo told the Iowa Farm Bureau, adding that foreign competitors spread myths and lies about U.S. products to protect their own farmers.

“The State Department has an obligation to fix that, too, and that goes for everyplace in the world.”