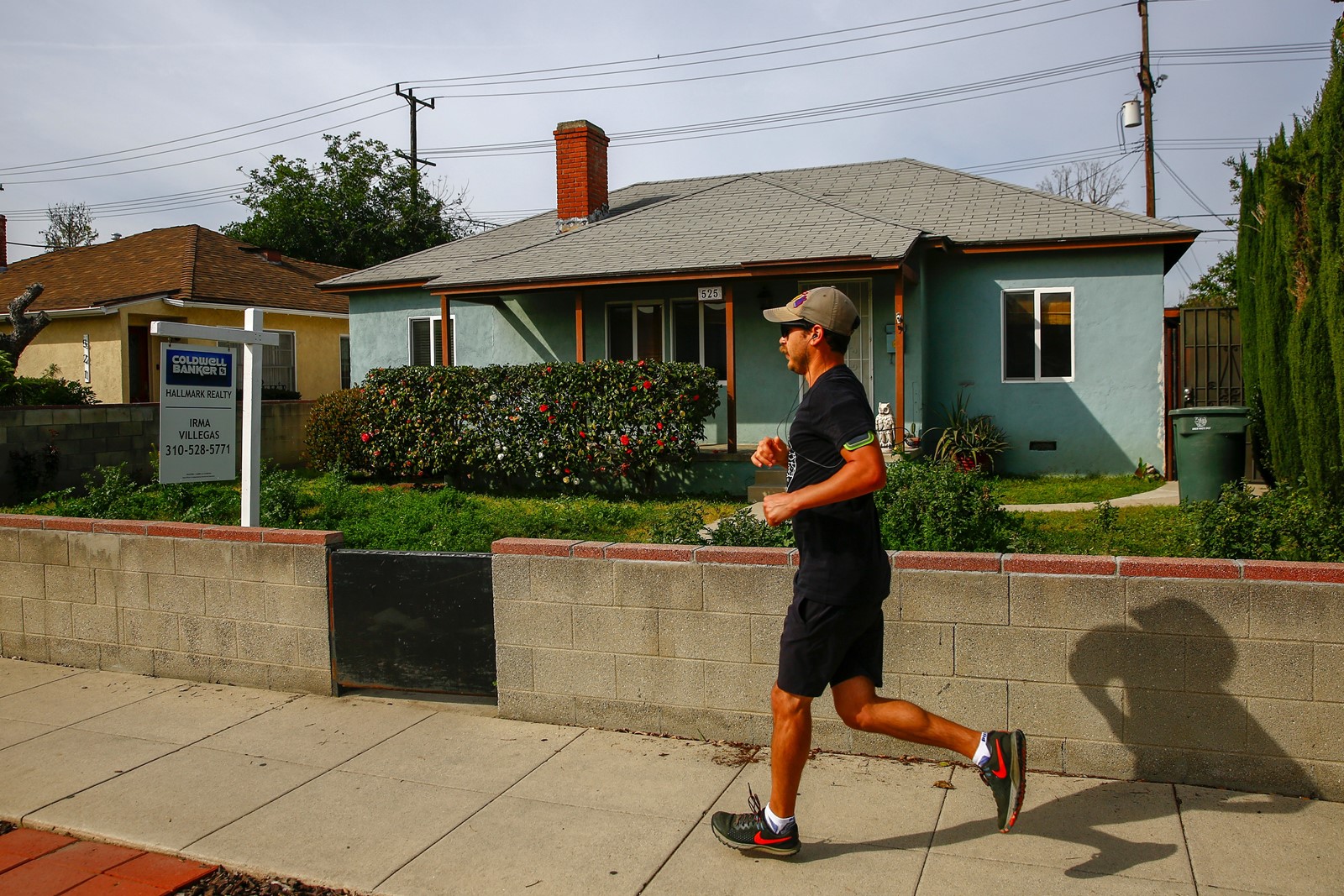 A RUNNER passes a Burbank home for sale in 2019. Experts say the pandemic has supercharged the market. Record-low mortgage interest rates have enticed buyers, and a low supply of homes has led to bidding wars. (Kent Nishimura Los Angeles Times)
PREVIOUS IMAGE

Real estate agents and other housing experts say the pandemic has supercharged the market. People with higher incomes who are most likely to buy a home in the first place have been relatively unscathed by the economic downturn. And some are looking for more space as some workplaces remain closed.

At the same time, mortgage interest rates have dropped to record lows, in part because of a Federal Reserve policy designed to stimulate the economy.

On Thursday, government-controlled mortgage giant Freddie Mac reported the average rate for a 30-year fixed mortgage was 2.77% this week, down from 3.6% a year earlier.

The drop has enticed more buyers into a market in which they’ve found few homes for sale, prompting bidding wars.

Some experts say home prices will see a smaller rise this year than in 2020, after the rapid double-digit price increases of recent months.

December’s median price, which was unchanged from November and 2% below an all-time high reached in September, may be an early indicator of that.

Selma Hepp, an economist at CoreLogic, said it’s too early to know whether price gains are in fact slowing down. It’s not uncommon for the median to fluctuate month to month, and real estate agents still report bidding wars.

“It continues to be a very strong market,” Hepp said.

Although price gains may slow, few — if any — experts are predicting outright declines, citing the mismatch between supply and demand. One forecast, from John Burns Real Estate Consulting, predicts price increases of 7% to 10% this year in major Southern California markets, compared with estimated increases of 9% to 14% in 2020.

Just how long the rapid increases in prices and sales may last depends on several factors, including the direction of the economy and whether there is a surge in foreclosures after the end of homeowner protections, which were instituted to help people weather the pandemic.

It’s also unclear how much of the current boom simply reflects sales that were likely to have happened anyway but were accelerated.

Travis Webb had been thinking of buying a house in the Inland Empire before the pandemic began last spring, with a target purchase date of summer 2020.

After many offices shut down in March, he started working from his Oceanside apartment and found himself with “more time to actually go and look at some places.” In April, the 51-year-old disability claims officer bought a $565,000 home in a new Brookfield Residential master-planned community in Menifee, about 50 miles from his old apartment.

The house has 3,492 square feet with a backyard for him and his two boys, ages 13 and 10. In Oceanside, the family had 900 square feet and no backyard.

“It’s better for everyone,” Webb said. “We are not sitting on top of each other.”

Federal housing data show that both first-time and repeat home buyers have driven the recent increase in sales both nationally and across California. The higher demand can be seen across Southern California, including in the December numbers as tracked by DQNews.

The upswing in the for-sale market is in stark contrast to the rental market, where tenants have disproportionately been hit by job or income losses.

Many low-income renters worry they’ll eventually face eviction during a pandemic that has killed more than 400,000 Americans. The average rent in Los Angeles has also fallen as vacancies rise, in part because some higher-income renters are choosing to buy.