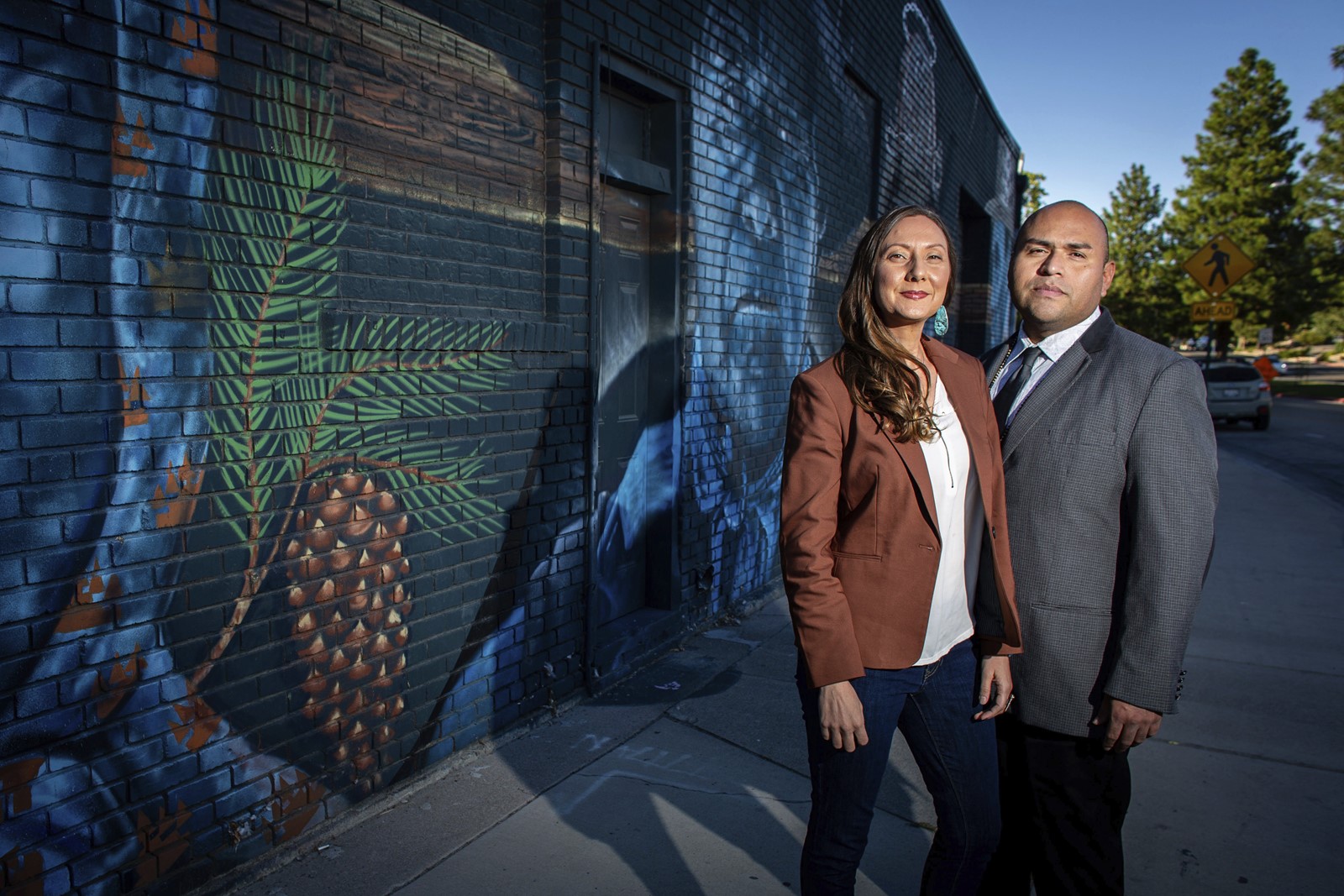 BRIAN AND Teresa Melendez of Reno are Bernie Sanders loyalists who’ll switch to Joe Biden. The president, Teresa says, has ignored “the will of native people.” (Photographs by Jason Armond Los Angeles Times) 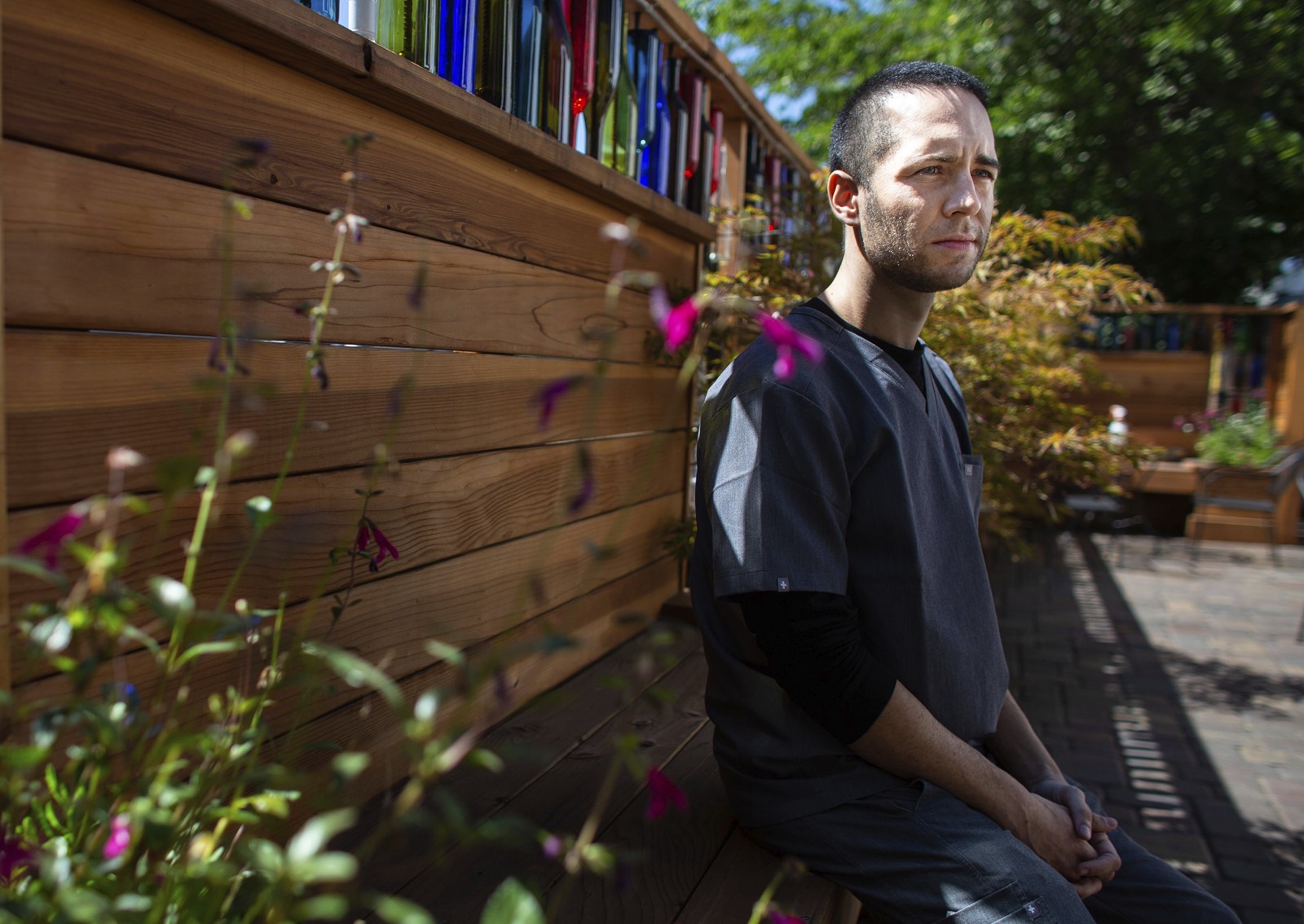 ALEX CABRERA, a “Berniecrat,” says he wishes the Democrats had picked a more inspiring candidate. “But Trump is so appalling” that he’ll vote for Biden. ()
PREVIOUS IMAGE

Seven months and a thousand political light-years ago, Bernie Sanders trounced the competition in the Nevada caucuses. To medical student Alex Cabrera, it seemed a dream of true progressive change might be at hand.

“It was still against the odds,” said Cabrera, 27, an activist for climate action, expanded public healthcare and the like. “A lot of forces were working against us, but I felt we were going to win.”

Now Cabrera looks forward to the November presidential election with a combination of sadness, anger and reservation, consigned to a choice between the “fascism” of President Trump and the “neo-liberalism” of Joe Biden, which feels like no choice at all.

“I think I am going to be forced to hold my nose and pull the trigger for Biden,” Cabrera said. “I blame the Democrats for not picking a more inspiring candidate. But Trump is so appalling. This is what I feel I have to do.”

Progressive voters like Cabrera could be key Nov. 3 in Nevada, a battleground state and one where thousands of disappointed Sanders voters — who made up nearly half the Democratic primary electorate here — will decide what to do in the general election.

No poll has measured how backers of the Vermont senator, Biden’s former rival, will vote in the fall, but more than a dozen interviews last week with Sanders voters and former campaign staffers suggested that most will support the Democratic nominee, if sometimes reluctantly, in a bid to prevent Trump from winning a second term.

Trump and his campaign team signaled that they maintain hopes of winning the Silver State and its six electoral votes. (It takes at least 270 electoral votes to win the presidency.)

Rallies originally planned for the president in Reno and Las Vegas over the weekend were canceled when local officials enforced rules against mass gatherings during the COVID-19 pandemic. At a rescheduled one, held at a smaller airport near Reno on Saturday night, Trump, without evidence, accused Nevada Gov. Steve Sisolak of trying to “rig” the election against him. He went to Las Vegas on Sunday to host a roundtable with Latinos and concluded with a rally in Henderson, Nev.

The mass rally was held inside a plant that manufactures heavy equipment. A large crowd, mostly not wearing masks, gathered after Henderson city officials told the campaign it was in violation of state rules prohibiting gatherings of more than 50 people.

Trump campaign communications director Tim Murtaugh said Democrats derailed the original events “to keep President Trump from speaking to voters because they know the enthusiasm behind his reelection campaign cannot be matched by Joe Biden.”

“Biden is a favorite here, but only a slight favorite,” said Jon Ralston, the venerable Nevada political pundit and editor of the nonprofit news site the Nevada Independent. “But the Trump people are going to throw everything they can in here to try to win this thing.”

The Republican president will be fighting an increasingly Democratic tide in Nevada. Democrats have won three straight presidential votes here. In 2018’s “blue wave,” they took a U.S. Senate seat from the GOP, elected Steve Sisolak as the party’s first governor in two decades and put all but one statewide office in Democratic hands.

Trump backers believe there are enough white, working-class voters — the president’s die-hard base — to give him a chance of turning the state from Democratic to Republican for the first time since 2004. In a conference call with reporters in early September, Trump’s operatives claimed internal polling in July showed them up by 2%.

“President Trump has delivered for Nevadans,” said Samantha Zager, a Trump 2020 spokeswoman, “and his campaign has the enthusiasm advantage going into November.”

Independent assessments of the president’s chances aren’t so rosy. The most recent public poll in Nevada gave Biden, the former vice president, a 4-percentage-point advantage among likely voters, closely mirroring a poll at the start of September that showed him leading by 5 points.

Also, Advertising Analytics, an independent company that tracks campaign advertising, has shown a seesaw ad battle in Nevada — Trump outspending Biden on television spots by more than $2 million in June and July, before going dark in August and early September, when Biden poured in $2 million. The president’s camp has booked $5.2 million in ads this month and next, compared with a $3.8-million ad buy for his rival.

Nevada once represented a bastion of Republican politics, the home of mainstream conservative stalwarts like Paul Laxalt, a governor, longtime U.S. senator and close friend of President Reagan.

Barack Obama then won twice in Nevada, before Hillary Clinton eked out a win of just over 2 percentage points in 2016.

In a measure of changing times, Laxalt’s grandson Adam lost the 2018 governor’s race to Sisolak, a businessman and former commissioner in Clark County, the home of Las Vegas.

On a Saturday in late February, Sanders’ fervent supporters felt he might be the one leading the Democrats against Trump.

Reno native Cabrera recalls how almost all the 40 participants in his caucus hurried to the side of the room that signified allegiance to the Vermont senator. “It was a ‘Whoa!’ moment,” recalled Cabrera, one repeated in many of the state’s precincts.

One week later, Biden had an equally big win in the South Carolina primary, momentum he rode to multiple victories on Super Tuesday and, eventually, the Democratic nomination.

Several Sanders supporters in Nevada said last week that they’re ready to shift to Biden in what they called a “harm reduction” strategy.

“The incumbent is so abhorrent in so many ways, I hope that is enough reason to get people out to vote,” said Jacob Allen, 24, a former Sanders campaign staffer in Reno. “But at the end of the day I worry about Joe Biden’s ability to inspire inactive voters to get up off the couch and vote.”

Still, Biden has several advantages in trying to consolidate Democratic support by November.

Sanders has signaled to his backers the importance of staying in the Democratic column. He cited Biden’s support of 12 weeks of paid family and medical leave and universal child careas the kind of policies that would come only with a Democrat in the White House.

“I am not going to sit here and tell you that Joe Biden is the most progressive guy in the world,” Sanders said on SiriusXM radio recently. “He is not, but his program is reasonably progressive.” Sanders pledged that he and other progressives would make “damn sure” Biden follows through.

The Democratic nominee also benefits from the support of the 60,000-member Culinary Workers Union, which represents hotel and restaurant workers.

The union is “massive and it plays an incredibly outsized role in the state’s politics,” said Jeremy Gelman, an assistant professor of political science at the University of Nevada, Reno. The group helps turn out Democrats, who enjoy a registration advantage statewide of more than 5%.

Brian and Teresa Melendez are among the Sanders Democrats poised to switch to Biden. The couple, who founded a statewide coalition of Native American Democrats, see Trump as out of touch on issues such as the environment and racial politics.

“The America he says he made ‘great,’ is one before civil rights and before many people had equal access to services,” Brian Melendez said. “That America was beautiful for people who had privilege, but not for Indigenous individuals.”

The couple expressed alarm over Trump’s reduction of the acreage of national monuments and opening of new tracts to coal, oil and gas extraction. “He repeatedly has ignored tribal sovereignty, treaty obligations and the will of native people,” Teresa Melendez said.

But Biden does not strike some Sanders loyalists as different enough from Trump to win their votes.

“I can’t get over his history with women,” said Wyatt, 24, adding that it didn’t help Biden that Trump has faced serial accusations of more serious sexual misconduct. “When I am advocating for women in the future, I have to be able to say I lived up to the right standard.” Wyatt plans to sit out the presidential vote.

Brittnee Maher, 31 and a mother of three, enthusiastically backed Sanders largely for his stand in favor of universal healthcare.

Maher, an Instacart delivery driver, believes that the economy has been remarkably resilient and that Trump is handling the COVID-19 pandemic “as best he can.” She thinks he can win Nevada because “there are a lot of silent Trump supporters like me.”

Trump’s challenge will be to overcome a large demographic obstacle: Even in seemingly vast Nevada, the state’s population is increasingly urban and suburban. Some 72% of Nevadans live in Las Vegas’s Clark County and more than 15% in Washoe County, home to Reno.

In 2016, Trump lost so badly in the state’s two population centers that it more than washed away his huge advantage in 15 rural counties, where he won by 40 percentage points, noted the Independent’s Ralston. Clinton won the state by 27,000 votes.

“We know the suburbs nationally have been shown to be leaning toward the Democrats and Biden, and we are seeing that in Las Vegas and Nevada too,” political scientist Gelman said. “I think the Bernie turnout for Biden will also be higher than it was for Clinton. That is going to be really hard for Trump to overcome.”