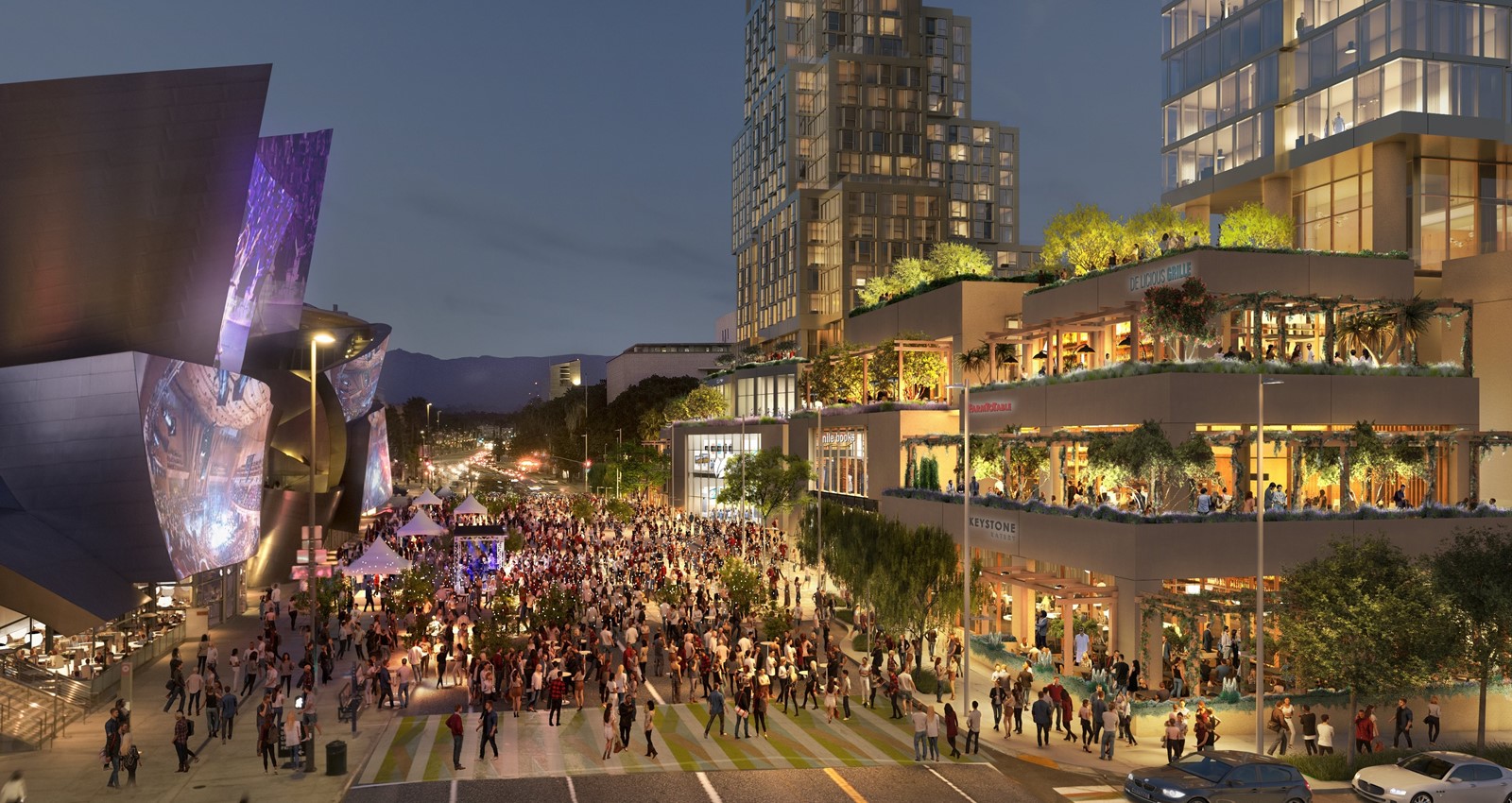 CONSTRUCTION is set to begin this fall for a complex with apartments, condos, theaters, restaurants and shops on Grand Avenue in downtown L.A. ( Gehry Partners / Related Cos.) 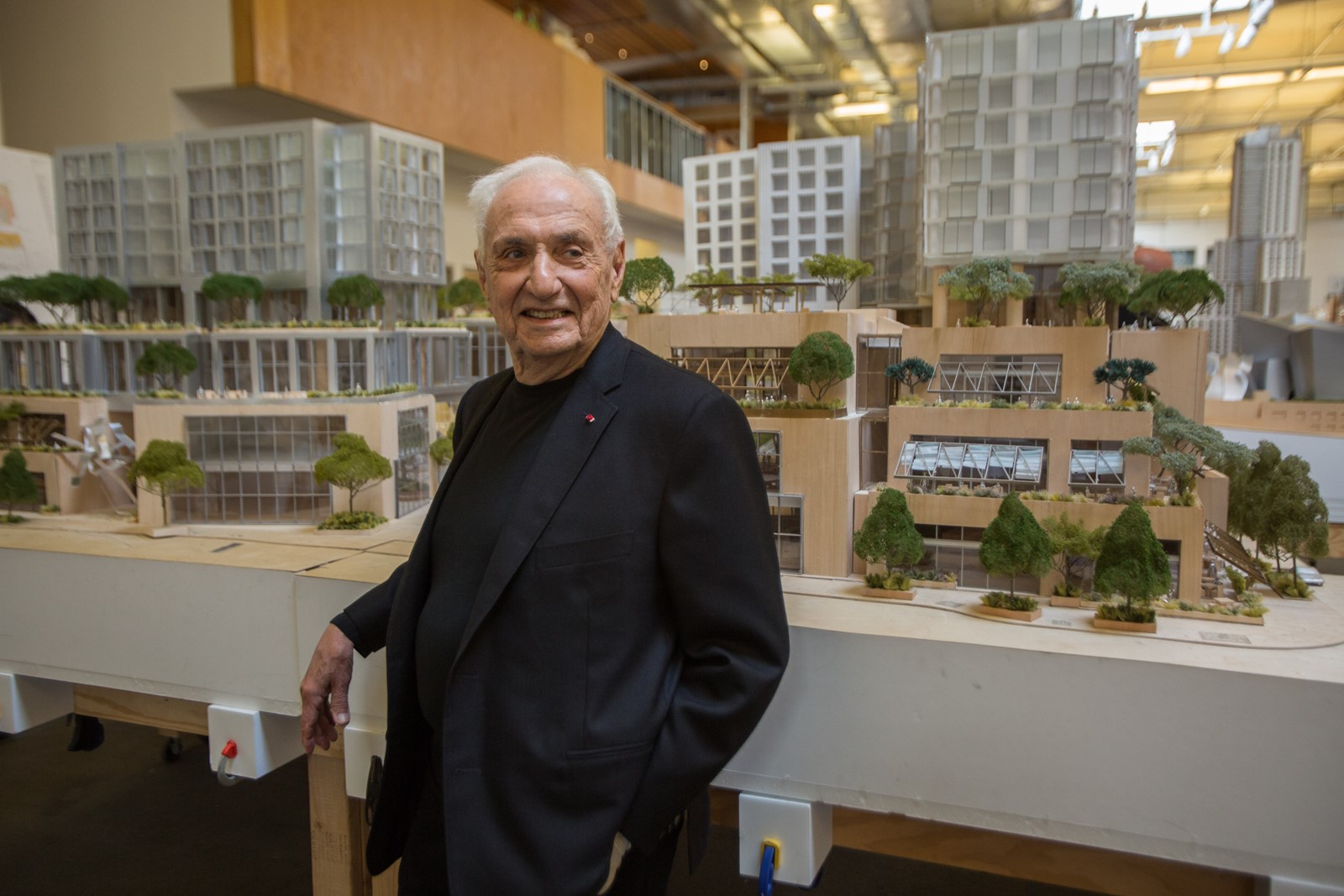 FRANK GEHRY, at his office in Los Angeles, says his designs for the Grand Avenue Project will stand out from other downtown developments. (Claire Hannah Collins Los Angeles Times)
PREVIOUS IMAGE

Visitors who come at all hours every day to marvel at architect Frank Gehry’s gleaming Walt Disney Concert Hall routinely turn their backs on the eyesore across Grand Avenue in downtown Los Angeles.

The shabby open-air parking structure known as “the Tinker Toy garage” has been a public embarrassment for decades. Now, its days are numbered.

With a lift from downtown L.A.’s expansive construction boom and an infusion of Chinese cash, work on the long-delayed $1-billion complement to the Walt Disney Concert Hall is finally set to begin in the fall.

Gehry has completed new — and nearly final — designs for the Grand, an open-air complex of apartments, condominiums, movie theaters, restaurants and shops that promises to enliven a city block that has been mostly dead for half a century.

“We will be fully under construction in early fall,” said Ken Himmel, president of Related Cos.’ mixed-use development division. The company got the contract to build the sprawling Grand Avenue Project in 2004 but repeatedly postponed work on the key parcel across the street from the concert hall on Grand at 1st Street as the recession and doubts about its viability slowed progress. The delay helped improve the project, Himmel insisted. Five years ago, there was a “disconnect” between what Gehry wanted to build and what Related could pay for, he said. “The budget wasn’t in line.”

Since then, Gehry has found ways to reconcile his vision with costs, Himmel said, and the prolonged burst of downtown development including housing, hotel and entertainment projects has attracted upscale restaurateurs and retailers who can afford to pay top rents.

“All that translates to higher revenues” for Related, Himmel said, “which allows us to build a better project.”

For his part, Gehry said he can now “live within the constraints” of Related’s budget and believes the Grand will stand out from other big mixed-use developments downtown.

“They look like everywhere else,” Gehry said, without identifying specific projects he regards as uninspired. “You see them everywhere.”

The Grand will have a mix of shops and restaurants spread among a series of landscaped open terraces, along with an approximately 450-seat cinema complex on the east side above Olive Street. There will be a 20-story Equinox hotel with 314 rooms and a 39-story residential tower with 113 condos and 323 apartments. Related will offer subsidized rents to low-income tenants for 20% of the apartments.

And it will blend with Disney Hall through shapes, colors and materials, Gehry said, so that the new complex is “not antithetical” to the distinctive hall or “in your face.”

That’s not to say it won’t be bold, with off-center angles, multiple terraces and an open core designed to attract people into one big plaza between the concert hall and the Grand, especially when the street is closed for special events.

“You’ll see a lightness in the building,” Gehry said. “That’s in the way we are relating to Disney Hall. We are not building heavy stuff.”

With the new development, Gehry will be able to complete a trick he baked into his design for Disney Hall — its surfaces were carefully arranged to receive light projections from across the street. When the Los Angeles Philharmonic is performing inside, the live concert can be shown on multiple walls of Disney Hall to entertain people outside and in the Grand.

“We selected the metal surface that tested best for projection,” Gehry said of Disney Hall. “You close that piece of Grand Avenue, put some chairs out there and you’ve got something special. We’re not just building buildings, we’re building places.”

Philanthropist Eli Broad, who has supported Grand Avenue improvements for decades and was instrumental in the erection of Disney Hall, predicted the Grand “will make certain Grand Avenue is viewed as the cultural and civic district of this region of 14 million people.”

It’s already one of the region’s top draws. Broad’s contemporary art museum, which opened next to Disney Hall in 2015, by itself draws 750,000 visitors a year, Broad said.

The Grand will replace a parking structure that was intended to be temporary when it was built after Bunker Hill’s once-fancy residential neighborhood was bulldozed in the 1950s and 1960s in an urban renewal project intended to create a new corporate and cultural center for the city.

Today Grand Avenue has office skyscrapers, apartment towers, museums and the Colburn School for performing arts, but the lifeless block across from Disney Hall contributes to a reputation for sterility Bunker Hill hasn’t been able to shake.

“When they scraped the mansions and decided to build a planned community, the plan didn’t call for blocks of parking lots,” said downtown office landlord Christopher Rising. “What Related is doing is the completion of a vision that is two or three generations old. It’s the part of the puzzle that’s been missing.”

Filling it has proved to be a monumental challenge. Civic leaders wanted a spectacular mixed-use complex that would transform Bunker Hill into a lively 24-hour hub, but widely perceived lack of demand in the neighborhood for deluxe hotel rooms, expensive residences and upscale stores discouraged the financial investment required to get it done.

After the 2007 recession, however, downtown has evolved into one of the most desirable real estate investment markets in the country as the building spree near Staples Center and other neighborhoods proved successful.

Key to getting the Grand underway is Related’s partnership with a subsidiary of China Communications Construction Group, one of China’s largest state-owned companies. Its subsidiary, called CCCG Overseas Real Estate Ltd., or CORE, has invested $290 million in the Grand since the companies partnered last year. It is CORE’s first project in the United States.

Related hired Rick Vogel, who speaks Mandarin, to manage development of the Grand and coordinate with CORE. Vogel will soon present the updated plans to city and county officials who make up the joint powers authority overseeing the Grand Avenue Project that also included the Broad, Grand Park and the 19-story Emerson apartment tower completed in 2014.

City Councilman Jose Huizar and County Supervisor Hilda Solis pressed Related to include amenities and community benefits such as free public events that would make the Grand welcoming to people beyond well-heeled symphony subscribers.

“Given the upscale view of Grand Avenue and what it’s become, we want it to invite everyone,” Huizar said.

That means there will be some inexpensive shops and food offerings as well as the wide public plaza and multiple entrances.