But regulators’ plan to phase out gas-powered cars doesn’t go quite as fast — or as far — as it could. 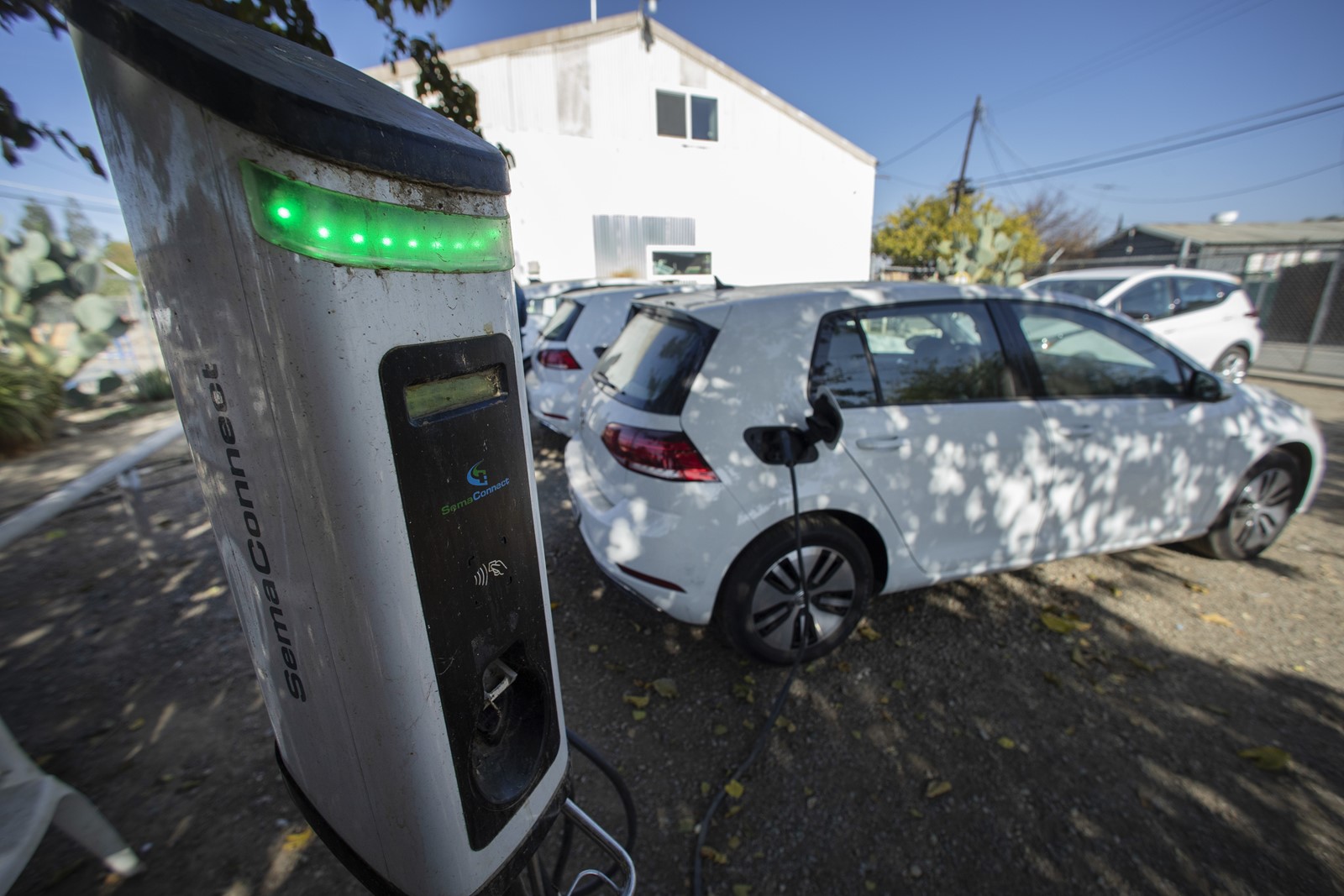 A CAR THAT is part of an electric vehicle ride-sharing program operates out of a former diesel mechanic’s shop in Huron in Fresno County. (Myung J. Chun Los Angeles Times)
PREVIOUS IMAGE

officials on Tuesday released a groundbreaking proposal to require all new cars sold to be zero-emission vehicles by 2035, a rule that would make it the first state to mandate the phaseout of gas-powered vehicles that are fueling the climate crisis. It signals the beginning of the end for combustion engines in California.

The state Air Resources Board plan follows through on a 2020 executive order by Gov. Gavin Newsom and is expected to be voted on this summer. It would require automakers to sell increasing percentages of zero-emission vehicles starting with 35% of new car sales in 2026, reaching 68% in 2030 and 100% by 2035.

It’s a much-needed mandate to avoid a disastrous heating of the planet and curb deadly and health-damaging air pollution, but regulators can do better. Some environmental groups have called on them to set a sales target of at least 75% zero-emission vehicles by 2030. Others have called for reaching 100% by 2030, a goal the state of Washington has set (but not mandated) to end the sales of new gas-fueled cars.

If they are not willing to go that far, regulators must at least strengthen the rule to ramp up more quickly. They must ensure that these standards go beyond the zero-emission pledges car manufacturers have already made and force them to get more electric vehicles on the road faster.

General Motors, the largest U.S. automaker, has already announced plans to sell only zero-emission cars by 2035, and other major companies including Ford, Mercedes-Benz and Volvo have pledged to work toward ending the sale of gas-powered cars by 2040 globally and by 2035 “in leading markets.”

Electric, plug-in hybrid and fuel cell vehicles accounted for 12.4% of California’s new car sales in 2021, up from 7.8% the year before. The market is expanding quickly, and setting a more aggressive zero-emission standard of at least three-quarters of new sales by 2030 would send a clear message that the nation’s largest auto market — and the other states that follow its rules — will force manufacturers to pick up the pace.

Speed is of the essence because we are running out of time to act on climate change and California is not on track to meet its legal obligation to cut greenhouse gas emissions to 40% below 1990 levels by 2030. Passenger vehicles are the state’s single largest source of greenhouse gas emissions, responsible for about one-quarter of its climate pollution.

Getting more people into electric cars is not just a climate imperative, it is necessary to reduce smog in some of the nation’s worst-polluted regions, including Southern California and the San Joaquin Valley.

The current proposal would achieve only an 8% reduction in carbon dioxide emissions by 2030, the year by which climate scientists say that global emissions must be slashed nearly in half. And because many cars stay on the road 15 years or more, an estimated 56% of vehicles on the state’s roads would still be gas-powered when sales of fossil-fueled new cars end in 2035, according to the air board.

Regulators should also strengthen environmental justice provisions in the rule to ensure that more electric vehicles get into low-income communities of color that have long borne the brunt of vehicle pollution but have been largely left out of the benefits of shifting to cleaner technologies.

Climate impacts are quickly worsening, battery technology is making great strides and surging gasoline prices and Russia’s invasion of Ukraine have underscored the perils of our reliance on fossil fuels.

This moment calls for bolder action on electric vehicles, and California’s regulators should push carmakers to go further and faster.