Back to school? It’s not likely this year

L.A. Unified officials say it’s a long shot that campuses will reopen before January, if then. 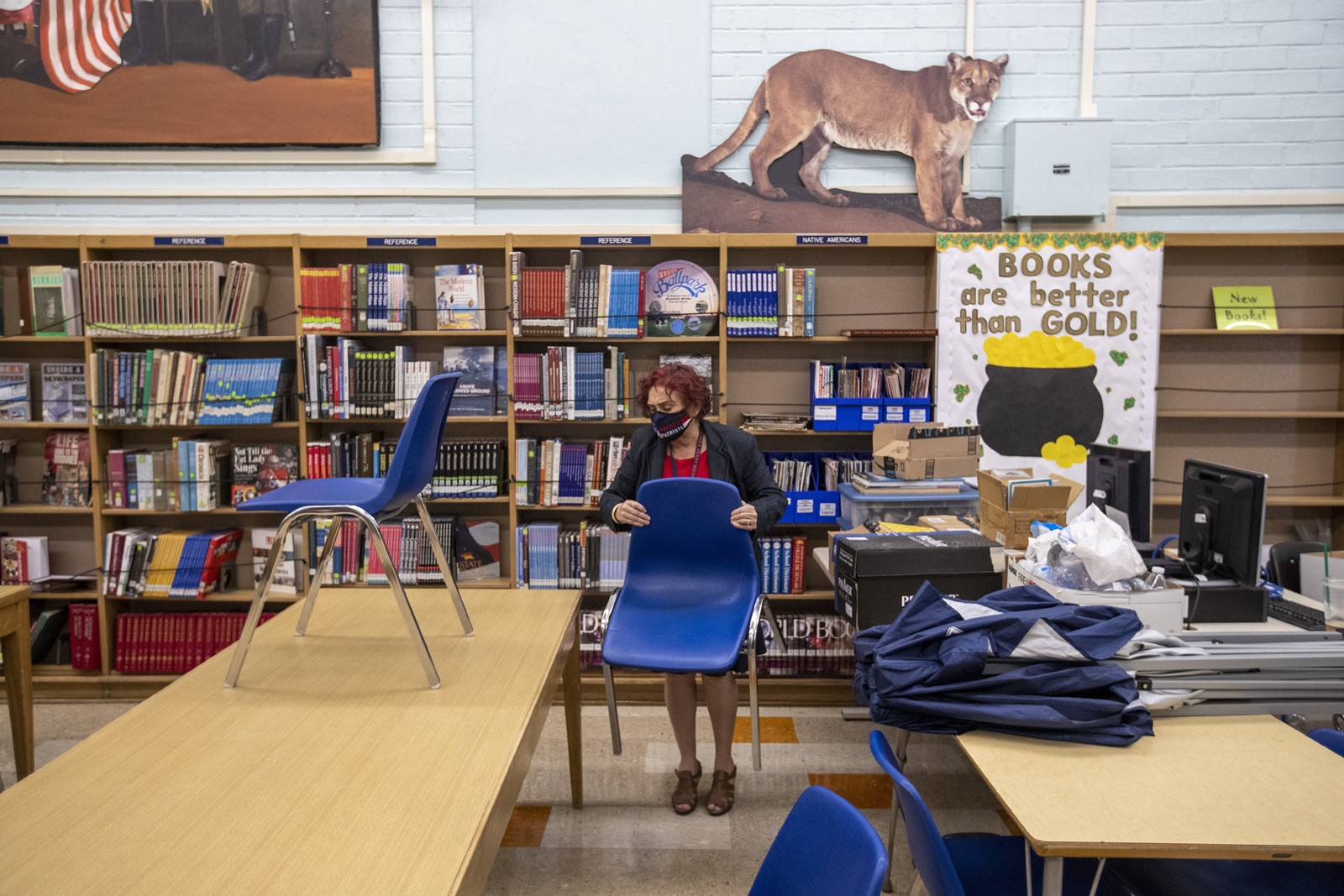 Los Angeles public school campuses are unlikely to reopen before January because COVID-19 infection rates may not drop quickly enough — and even if they do, it would be too disruptive to switch from online learning so close to the end of the fall semester, two leaders from the school board told The Times.

L.A. Unified School District Board of Education President Richard Vladovic and Vice President Jackie Goldberg said that even January may be too soon to reopen campuses.

“If you look at a calendar, it would be difficult to do,” Vladovic said of a late- semester switch. “I think best-case scenario is there’ll be some form of return in January, whatever that is.”

“It’s more complicated than anyone could imagine on a school site — the complexities and the interrelationships, because of our varied instructional programming,” he added.

Goldberg talked of additional complications, including the need for last-minute classroom changes, because some students would remain in distance-only learning, and some teachers would be unable to return to campus because of health issues that could put them at risk.

“This is finals time for the high-schoolers and the end-of-the-semester assessments for all the other grades,” Goldberg said. “Why would we want to go back in December? Which would be probably the earliest we could possibly go. ... This is the wrong time to do that.”

Adding to the frustration of L.A Unified parents is the fact that schools in adjacent Orange and Ventura counties are cleared to reopen. And even in L.A. County, many schools outside of L.A. Unified are offering more services to students.

Some of the county’s other 79 school districts — and many private schools — are taking advantage of waivers that allow classes for students in transitional kindergarten through second grade. Another exception allowssmall groups of students with special needs to attend classes on campus, up to 25% of enrollment at any given time.

L.A. Unified has not yet provided these options, although it is in negotiations with the United Teachers Los Angeles union to ramp up services. The district is also well into developing an ambitious COVID-19 testing program, designed to encompass K-12, preschool and adult school students and employees — and perhaps family members as well — totaling at least 700,000 people, in an effort to create a data-driven path to safely reopening campuses.

But such testing efforts are not going to lead to general campus reopening until health conditions improve in L.A. County — and this applies to all schools, public and private, county Public Health Director Barbara Ferrer told the City Council on Wednesday.

Her department is not willing to divide the county into areas where schools can and cannot reopen, even if some communities have low virus infection rates compared with others, she said.

State regulators, for their part, also have not divided counties when determining whichsectors can open and in what way.

In the same meeting, L.A. schools Supt. Austin Beutner said such a scenario plays out at many L.A. schools, which become gathering places for people from across the county.

Parent Danna Rosenthal, who on Saturday took part in a downtown rally to reopen campuses, said any sort of return would be an improvement — “even if it means three weeks before the end of the semester.”

“My kids are suffering,” said Rosenthal, who has a son at Warner Avenue Elementary School in Westwood and another in a special program for students with disabilities. “They are mentally going downhill, have anxiety and depressed. They miss their friends, they miss routine, they miss seeing their teacher in person. Lastly, neither one is putting the same kind of effort into their work.”

Heather Thompson, who has a seventh-grader at Hesby Oaks Leadership Charter in Encino, said the district and the teachers union should be moving with more urgency.

“So many other places have prepared to open that LAUSD doesn’t even need to build their own wheel,” Thompson said. “It just needs to be adapted to our district and school sites.”

Many families in other U.S. school districts are choosing to remain online even when they can go back. In New York City, the nation’s largest district, just over a fourth of students have returned to in-person instruction, Mayor Bill de Blasio said this week.

L.A. Unified has been accelerating efforts to provide one-on-one tutoring — both online and in person, which is permitted under state rules.

Also, district officials said they would set aside $1 million to help some 30,000 students who are in foster care or are members of homeless families. The goal is to provide a supervised place to study, access to child care and one-on-one tutoring. Care packages will include surge outlets, noise-canceling headphones, school supplies and personal protective equipment such as face coverings.

The latest state evaluation, released Tuesday, puts L.A. County firmly in Tier 1 (purple), the most restrictive category, signifying that there is widespread transmission of the coronavirus. And a key indicator — average daily cases per 100,000 people — has gotten worse in recent weeks.

Even if case rates start dropping immediately, it could take several weeks for them to decrease enough to begin a countdown toward reopening schools, according to the state’s rubric. For L.A. County to enter Tier 2 (red) it must qualify for this tier for two weeks. Once the county is officially in the red tier, it must stay there for two more weeks before schools can reopen. A setback could restart the clock.

At the earliest, campuses could not reopen until after Nov. 23. But that’s Thanksgiving week, when L.A. Unified schools are closed — and then there would be only three weeks left before winter break.

Goldberg added that L.A. Unified hasn’t completed a final plan for hybrid education and has not yet surveyed parents about whether they would prefer to remain online-only or opt for a schedule that is staggered to keep classes small and allow for social distancing. Hybrid plans typically call for students to come to campus part-time while continuing to do much of their schooling from home.

She and Vladovic both expressed concern that even January might prove too soon.

“Honest to goodness, we really do not know, do we?” Goldberg said. “We do not know what’s going to happen with the virus.”

Both board members spoke for themselves, not on behalf of the district. Both praised teachers and other district staff for responding to the crisis with creativity and long hours.

In remarks during his regular Monday broadcast, Supt. Beutner may have laid the groundwork for a difficult official announcement.

In contrast to L.A. County, Beutner said, “the Bay Area remains at levels well below the state guidelines for schools to consider reopening, but both Oakland and San Francisco have announced they’ll not return to schools before January.”

He added: “The health and safety of all in the school community is not something we can compromise on.”