Trump, Kim played to the camera

President’s meeting with North Korean ruler appears to be made for reality TV. 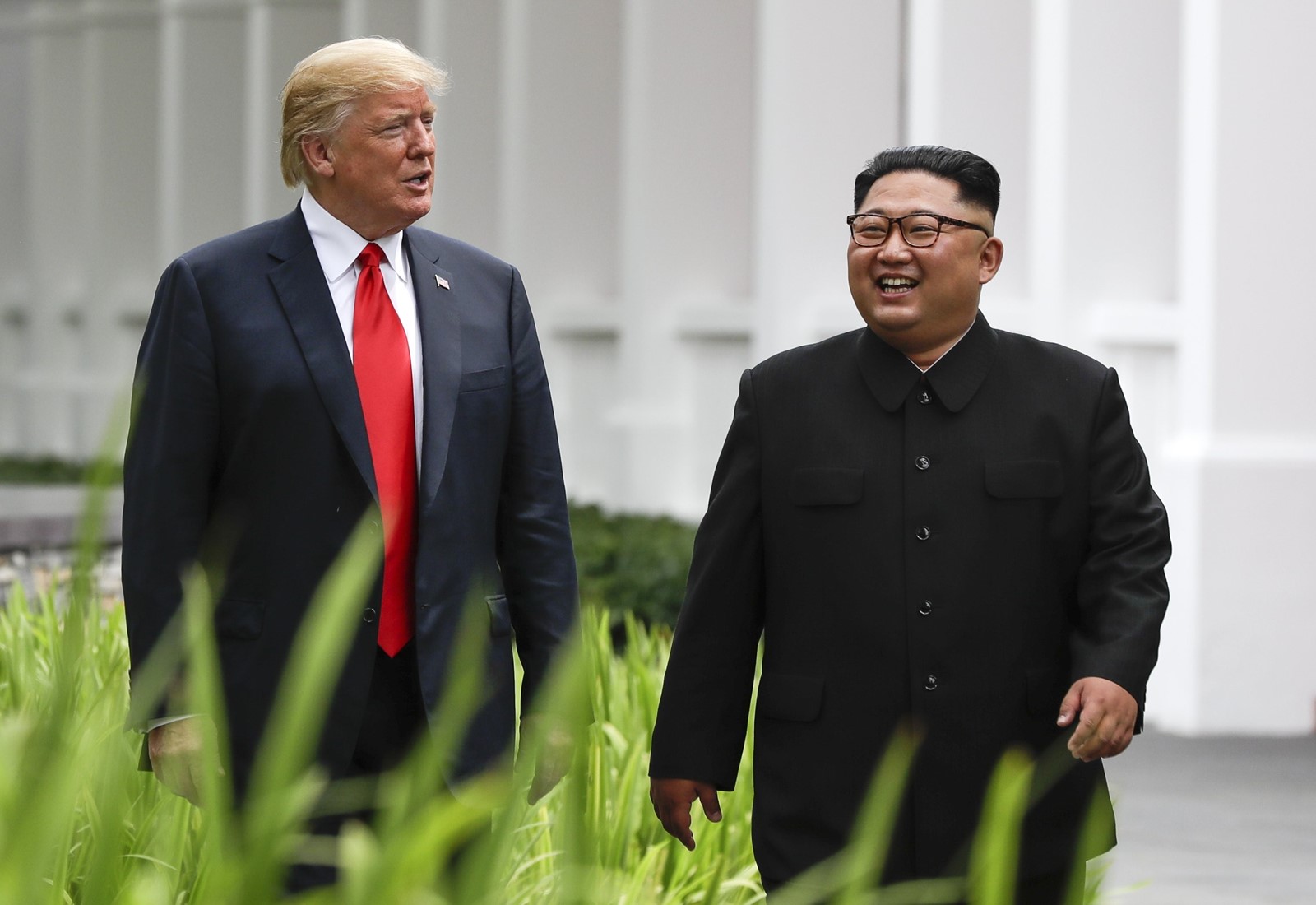 THE SUMMIT between President Trump and North Korean leader Kim Jong Un in Singapore might seem familiar to TV fans. “This really feels like ‘Celebrity Apprentice,’ not about the security of the United States,” a presidential advisor in previous administrations said. (Evan Vucci Associated Press) 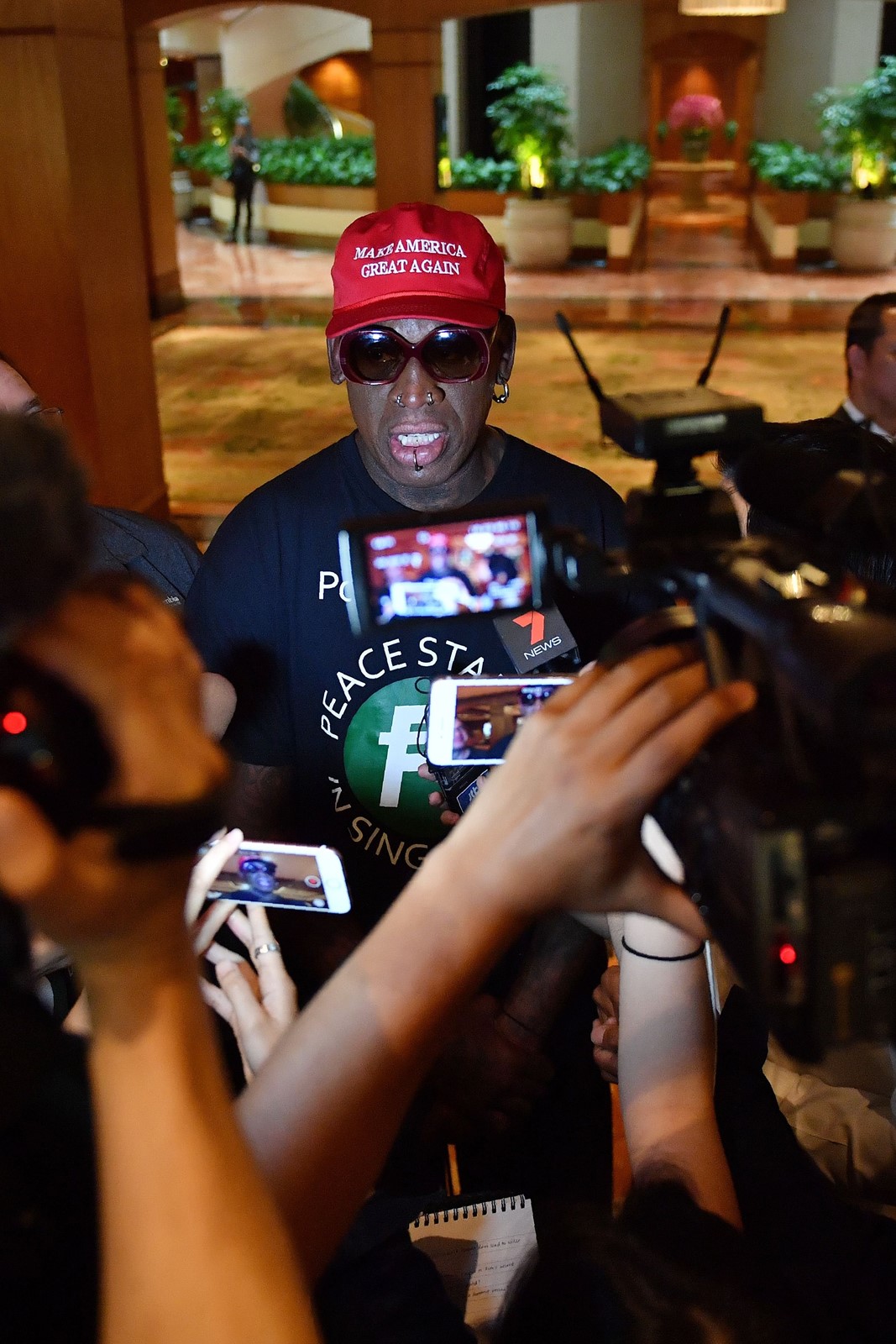 It was an image Americans saw on a certain reality TV show too many times to count: The black limousine pulls up and that familiar, lumbering figure — impossibly blond hair combed back, the same inscrutable expression of satisfaction on his face — gets out and walks into the building.

When it played out again Monday night on American televisions, broadcast live from an island in Singapore’s harbor, that character wasn’t Donald Trump, the “Apprentice” star, showing up to inspect a new building; it was President Trump, walking into a meeting with the leader of North Korea.

Minutes later, Trump and Kim Jong Un walked to greet each other, stood in front of a stunning backdrop — flags of two countries that have never formally recognized each other — and shook hands, maintaining their firm grip for 13 seconds. The cameras followed them to a meeting room where the two leaders sat and shook hands again.

Although it was like no other summit, it was what everyone familiar with this president expected: heavy on symbolism and superlatives, overproduced, replete with repetitive B-roll and a feel-good ending — a cliffhanger of sorts — already in the can. The mind-numbing details, which in this production have to do with real nuclear arms, were left for off-camera action.

“Just the fact that they were having the meeting implied it was going to go well,” said Ian Bremmer, president of the Eurasia Group, a political risk consulting firm. “And Trump’s ability to hear what he wants to hear is pretty high.”

Yet Trump stoked the suspense for weeks beforehand. On Saturday, Trump had predicted he would know within the first minute of meeting the dictator whether the high-stakes summit was destined to be a success. Amid a cacophony of clicking camera shutters as they sat for their initial meeting with only interpreters present, Trump predicted a crowd-pleasing ending to the day ahead.

“I think it’s gonna be really successful, and I think we will have a terrific relationship, I have no doubt,” Trump said.

The reality television aspect of their historic meeting was of a piece with the numerous events that led to it.

Last month when Trump went to the tarmac at Joint Base Andrews in Maryland at 3:30 a.m. to welcome home three U.S. citizens who had been imprisoned in North Korea, he brought along the first lady, the vice president and dozens of reporters and TV cameras. Later he exulted in how he had gotten the biggest predawn TV ratings of any president.

When about 3,000 journalists descended on Singapore, they arrived in the press center to find ceremonial materials emblazoned with a logo for the summit, drawings of Kim’s and Trump’s faces side by side. At times during the event, it was difficult to separate the history unfolding in real time from reality TV kitsch.

As the principals met behind closed doors, talking heads filled the hours of rolling cable news coverage of the summit, replaying the video of Trump and Kim shaking hands.

At one point, former NBA star Dennis Rodman, something of a self-anointed Svengali on North Korea, held forth on CNN in a live remote from Singapore, fighting back tears at one point as he spoke of his past efforts to help bring about U.S. talks with Kim, which he said fell on deaf ears in Washington.

“This really feels like ‘Celebrity Apprentice,’ not about the security of the United States of America,” said Wendy Sherman, a former advisor, including on North Korea, to Presidents Clinton and Obama, during a TV appearance Monday.

Kim, an enigmatic figure initially underestimated when he took power after his father’s death, seemed more than willing to play along. Over the last year, the 34-year-old has demonstrated an uncanny ability to match Trump’s penchant for stagecraft, bombast and propaganda.

In Singapore, Kim surprised everyone by hitting the town Monday night, heading to the 55-story Marina Bay Sands hotel, gazing out at the city from the roof deck and smiling in a selfie with two Singaporean officials.

“I don’t see the North Koreans as having done anything at this point, and I’m of the view of this is a great thing for Kim Jong Un,” former Ambassador Christopher Hill said. “He’s on a level playing field with the president of the United States, all because he built up their nuclear force.”

As the meetings reached the five-hour mark, Trump and Kim emerged again and strode together to a sturdy wooden table, at which both signed several documents.

The details of the leaders’ communique revealed it to be not unlike a reality TV finale — largely aspirational. Yet for Trump, eager for a foreign policy achievement before November’s midterm election, the short summit served its purpose, providing the imagery suggesting to his American audience that his daring diplomacy is uniquely effective.

True to form, Trump began his final Singapore event, a solo news conference, with a promotional video that played before he entered. “Two leaders, one destiny,” a narrator’s voice-over boomed as the video started. Afterward, he tweeted a video montage of summit scenes, complete with a Hollywood-like score.

“All the pageantry associated with this process now is something he obviously likes and wants to continue because it puts him on the front page as a leader on the world stage,” said Suzanne DiMaggio, a senior fellow at the New America think tank. “But at some point, he’s going to have to deliver.”