The attorney general is behind ‘a cover-up of the cover-up’ in an effort to again protect Trump, critics say. 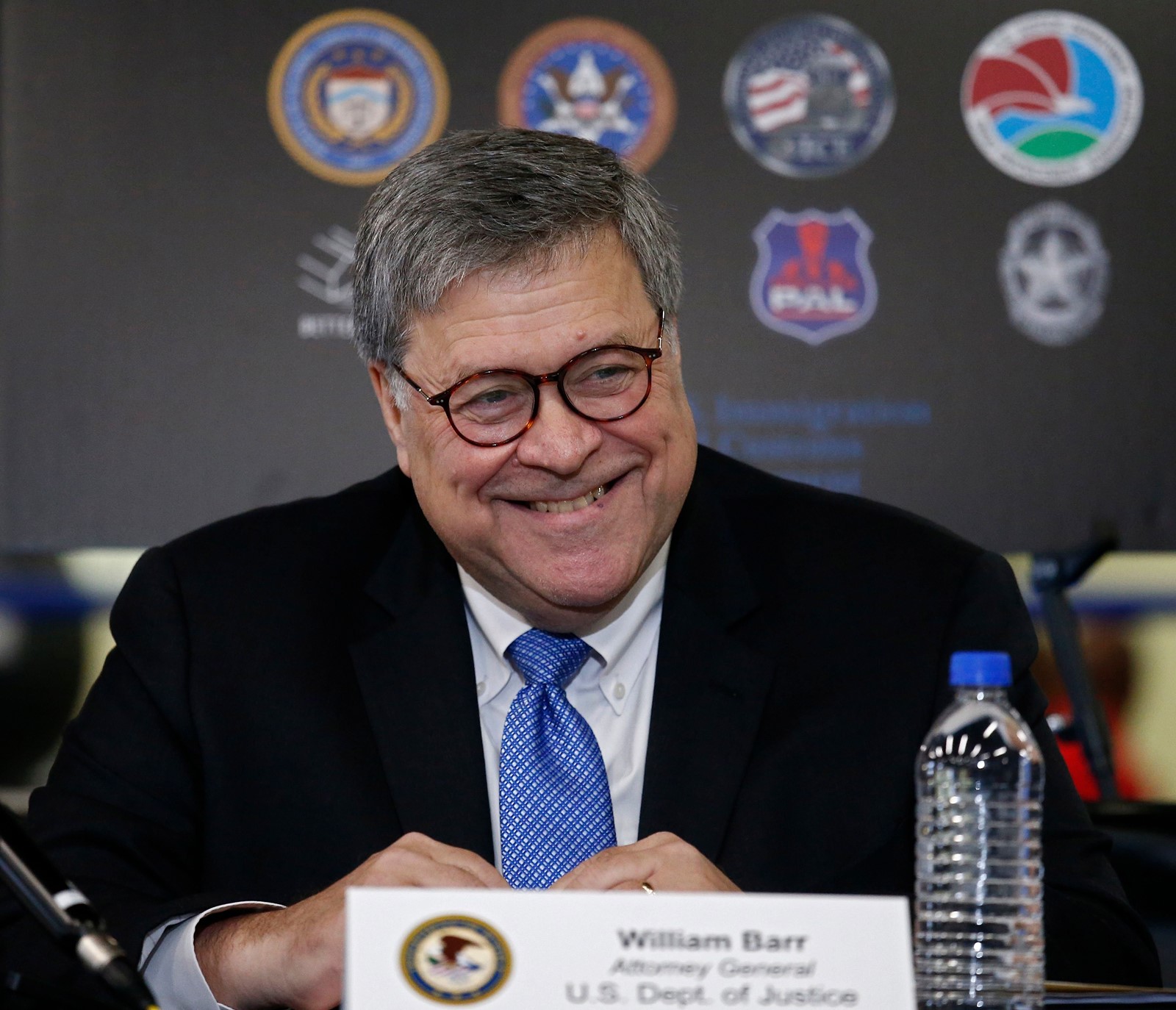 The accusation comes two days after a declassified White House memorandum revealed that Trump repeatedly told Ukrainian President Volodymyr Zelensky in a July 25 phone call that he would instruct Barr to call him, thrusting the attorney general directly into the political firestorm of the impeachment proceedings that Pelosi announced this week.

“I think what they’re doing is a cover-up of the cover-up,” Pelosi (D-San Francisco) told MSNBC. “To have a Justice Department go so rogue — well, they had been for a while, and now it just makes matters worse that the attorney general was mentioned, that the president was mentioned.”

On Thursday, the House Intelligence Committee released a whistleblower’s complaint that alleged Barr “appears to be involved” in Trump’s efforts to convince Ukrainian officials to investigate unfounded allegations regarding Democratic presidential candidate Joe Biden and his son Hunter.

The author also alleged that White House officials sought to “lock down” records of Trump’s July 25 phone call by directing aides to move digital material from a widely available computer network to one reserved for highly classified material, suggesting a possible attempt to hide embarrassing material or wrongdoing.

The Justice Department, which Barr heads, determined last month that intelligence officials did not have to give the nine-page complaint to congressional oversight committees, which under the law would normally review such complaints. Prosecutors in the criminal division also ruled that the complaint and the White House memo did not indicate Trump had committed a crime and that no further action was warranted.

A Justice Department official said those decisions were made without input from Barr, though the attorney general did not recuse himself from the matters. Democrats are likely to focus in the coming weeks on whether Barr sought to protect the president rather than the law.

Trump’s multiple references to Barr in the call, and the whistleblower’s allegations, thus put the attorney general back in an uncomfortable spotlight, with Democrats and other critics saying they have lost faith in his ability to impartially oversee the Justice Department.

Rep. Adam B. Schiff (D-Burbank), who is spearheading the impeachment inquiry as chairman of the House Intelligence Committee, said in an interview that “the attorney general thinks it’s his job to do the president’s will no matter how unethical that may be, and he’s made that abundantly clear.”

Several other Democrats, including Rep. Jerrold Nadler (D-N.Y.), chairman of the House Judiciary Committee, urged Barr to recuse himself from anything to do with Ukraine or Biden.

A spokeswoman for Barr said there was no reason for the attorney general to step aside because he had done nothing wrong.

Several legal experts said Barr should have stepped aside from the department’s work on the legal opinion and whether to pursue a criminal case because his name was referenced so extensively in the complaint and by Trump in the phone call. By not doing so, he raised questions about his independence and cast a further shadow on his tenure, they said.

“He is certainly showing himself to be a lawyer for the president and not a lawyer for the country, which is what an attorney general is supposed to be,” said Stephen Gillers, a professor at New York University School of Law and an expert on legal ethics.

It is the second time that Barr has become a target of Democrats’ ire since he took office seven months ago. He replaced the embattled Jeff Sessions, a former senator from Alabama who infuriated the president by recusing himself from the Russia investigation. Trump has told associates he wanted an attorney general who would protect him.

By all accounts, Barr has not disappointed Trump, starting with how he handled the rollout last spring of special counsel Robert S. Mueller III’s report on Russia’s interference in the 2016 election.

Democrats and legal scholars roundly criticized the attorney general for going further than Mueller by saying Trump hadn’t obstructed justice in attempting to interfere with the investigation.

In a news conference before the report was released in April, Barr asserted that Trump was justifiably angry and frustrated by the Mueller investigation, a claim that puzzled former federal prosecutors of both parties because they said Barr sounded more like a defense lawyer than a prosecutor.

Democrats see Trump’s efforts to get Ukraine to meddle in the 2020 election — and appearing to link it to U.S. military aid to a country widely seen in Congress as the front line against Russian aggression — as a more clear-cut abuse than the multiple instances of alleged obstruction of justice compiled by Mueller.

If Barr was directly involved, as Trump suggested on his call with Zelensky, he is potentially culpable as well.

Barr was first told about Trump’s conversation with Zelensky several weeks after the phone call, when the Justice Department received word about a potential referral involving the whistleblower’s complaint, Justice Department officials said.

The author, reportedly an intelligence officer then tasked to the White House, wrote that Trump “is using the power of his office to solicit interference from a foreign country in the 2020 U.S. election.” The “interference includes, among other things, pressuring a foreign country to investigate one of the president’s main domestic political rivals.”

The president’s “personal lawyer, Mr. Rudolph Giuliani, is a central figure in this effort,” the complaint states. “Atty. Gen. Barr appears to be involved as well.”

In his call with Zelensky, Trump named Giuliani and Barr “as his personal envoys on this matter” and referred to them “multiple times in tandem,” the complaint alleged.

The complaint, written two months before the White House released its memorandum of the call, turned out to be a fairly accurate reflection of the conversation.

According to the memorandum, which was initially marked “EYES ONLY — DO NOT COPY,” Trump said multiple times that he would have Giuliani and Barr assist Zelensky’s government in investigating Biden and other Democrats.

“There’s a lot of talk about Biden’s son, that Biden stopped the prosecution, and a lot of people want to find out about that, so whatever you can do with the attorney general would be great,” Trump said. Moments later he linked his request to a possible visit by Ukraine’s leader to the White House.

On Wednesday, when Trump met the Ukrainian leader on the sidelines of the U.N. General Assembly in New York, Zelensky publicly reminded the president that the White House had still not given him a date for a visit.