He recognizes the leader of the South American nation’s opposition as the legitimate president. 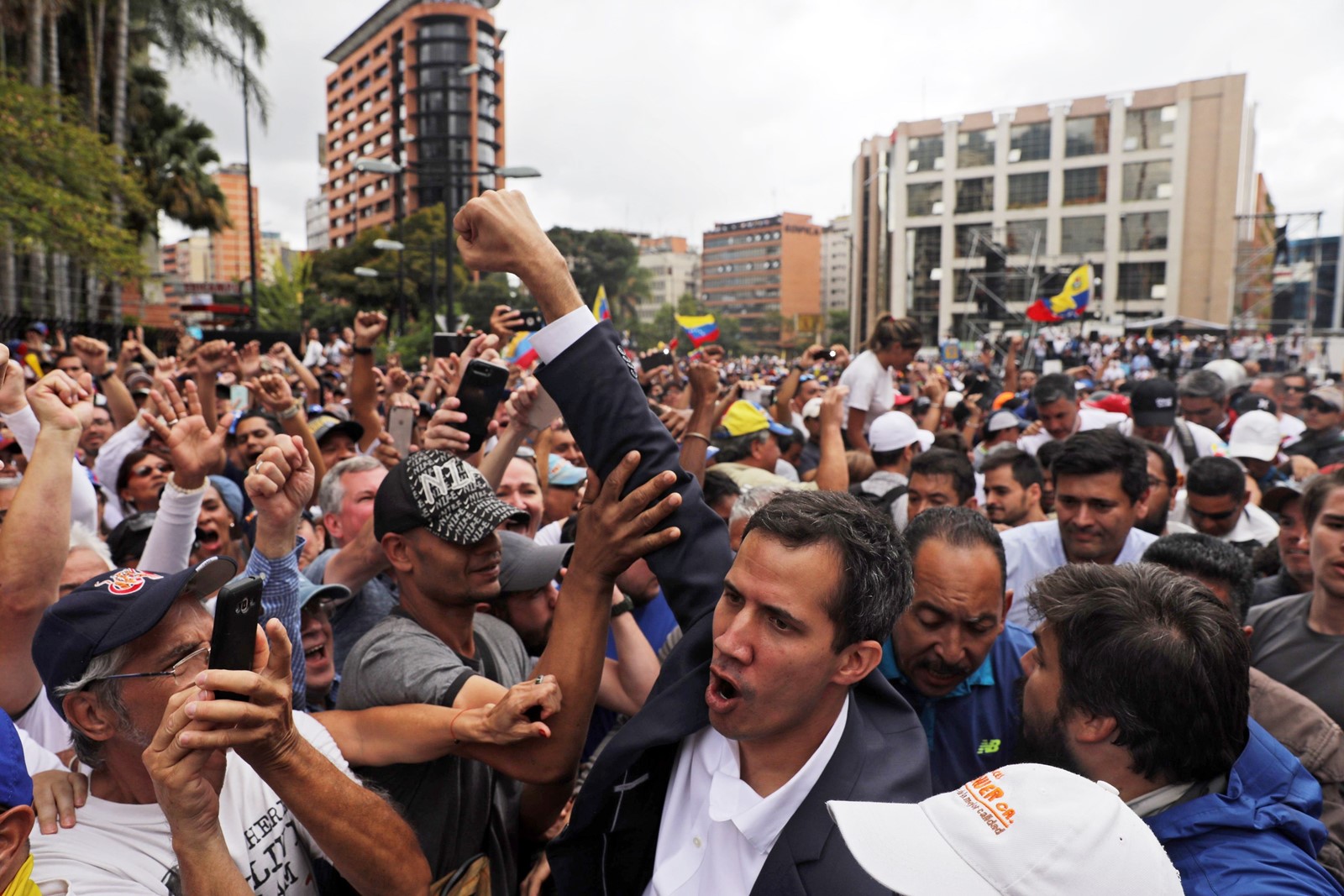 As masses of Venezuelans turned out to protest their government, the Trump administration took the unusual and provocative step Wednesday of recognizing the leader of Venezuela’s political opposition as the country’s legitimate president.

In Caracas, the leader, a young and charismatic engineer named Juan Guaido, declared he was assuming the mantle of acting president — and braced for reaction from President Nicolas Maduro and his security forces.

And react he did: Maduro announced he was breaking diplomatic ties, already strained, with Washington and giving U.S. personnel 72 hours to abandon the country.

“Anyone can declare himself president, but it’s the Venezuelan people who elect him, not the gringogovernment,” Maduro declared to his supporters rallying outside the presidential palace. He swiftly branded Guaido a “puppet” of U.S. “imperialism.”

The dramatic escalation came as the Trump administration seeks ways to ramp up pressure on Maduro’s socialist government, which it accuses of widespread human rights abuses, drug trafficking and a host of other crimes. Already, Washington has blacklisted 70 senior Venezuelan officials and entities and put sanctions on some of its export industries.

Venezuela has teetered on the verge of collapse for some time, mired in social and economic chaos that has depleted supplies of food and medicine and sent millions of Venezuelans fleeing as refugees. About 80% of the people here now live in poverty.

In a statement, President Trump said he was recognizing Guaido as the interim president of Venezuela because he is the head of “the only legitimate branch of government duly elected by the Venezuelan people,” a reference to the country’s National Assembly, Venezuela’s legislative body that Maduro has sidelined and replaced with his own legislature stacked with his supporters.

The sequence of events represented a rare and potentially dangerous dive into international diplomacy unusual for this administration. It delivered a diplomatic blow to Maduro, but a much-needed boost to the long-suffering, largely ineffective opposition movement.

The movement was in need of new energy after Maduro’s violent suppression in 2017 of nationwide marches that left protesters dispirited and leaderless. An estimated 165 people died, 15,000 were injured and at least 4,800 arrested.

Wednesday’s march, which occurred on the anniversary of the 1958 overthrow of dictator Marcos Perez Jimenez, was seen as a test of Guaido’s strength of leadership and ability to summon the masses to the street, a test he seems to have passed.

“Today, on Jan. 23, in my status as National Assembly president before all powerful God and my colleagues, I swear to formally assume the duties of national executive to achieve the end of usurpation, [form] a transitional government and [hold] free elections,” Guaido told tens of thousands of Venezuelans who crowded Caracas’ downtown streets.

“I am not afraid, [rather] I fear for the people who are [living in] bad times,” Guaido proclaimed.

Maduro was reelected last spring in a disputed election and began a second six-year term on Jan. 10. The U.S. is among dozens of countries that have refused to recognize him as a legitimate president.

“The people of Venezuela have courageously spoken out against Maduro and his regime and demanded freedom and the rule of law,” Trump said in a statement. “I will continue to use the full weight of United States economic and diplomatic power to press for the restoration of Venezuelan democracy.”

Diplomatic ties between Caracas and Washington were already hanging by a thread, and Maduro’s order Wednesday probably completes that break.

Washington’s push against Caracas has benefited from unusual unity in Latin America and the Caribbean for efforts to punish Maduro and end his autocratic rule, knitted together in a 12-nation coalition called the Lima Group. In recent months, especially, Venezuela’s two neighbors, Brazil and Colombia, have elected right-wing presidents, further stepping up pressure. They quickly supported the U.S. recognition of Guaido.

However, a significant crack in that unity came later Wednesday when Mexico broke ranks and refused to recognize Guaido. Mexico elected a leftist president, Andres Manuel Lopez Obrador, last year, and he has vowed to follow what he considers a less interventionist foreign policy.

“So far there is no change in diplomatic relations with that country or with their government,” Jesus Ramirez Cuevas, a spokesman for Lopez Obrador, said in Mexico City.

Left unclear is what Washington will do next.

Secretary of State Michael R. Pompeo called on Guaido to set up a “transitional government” and move to hold elections, essentially establishing a parallel administration that could easily slip into civil warfare.

A senior administration official said additional sanctions were being prepared but declined to give specific details. So far, the U.S. and a number of other countries have imposed sanctions aimed at cutting Venezuela’s revenues, such as its export of gold and sell-off of debt. They have resisted imposing an embargo on oil, whose once-thriving production made Venezuela a rich country. Nor has the administration added Venezuela to the list of state sponsors of terrorism, another measure under consideration.

“We have barely scratched the surface” of punitive measures that can be taken, the official said, briefing reporters on condition of anonymity in keeping with White House rules.

Trump acted after a meeting on Tuesday in the Oval Office with Sen. Marco Rubio (R-Fla.) and other congressional hawks on Latin America. Rubio has long pushed for tougher action against Maduro, including opening the possibility of a U.S.-led military coup, as well as recognition of a Guaido government.

Rubio urged Trump to “hold the illegitimate Maduro regime directly responsible for any actions taken against President Guaido, members of the National Assembly and peaceful protesters.”

Venezuelans have grown increasingly desperate with a collapsed economy, scarcities of food and medicine, and rising crime. Grim prospects for any near-term improvement have prompted an estimated 3 million people to leave the country since Maduro’s socialist predecessor, Hugo Chavez, took power in 1999.

One of the marchers Wednesday, psychologist Tachy Osorio, 29, said he was attending the protest because of the personal connection he felt with Guaido.

“I like Mr. Guaido. I feel empathy for what he says and for his discourse which reflects what we Venezuelans need at this moment,” Osorio said. “This march is different from the past. It was a spontaneous decision of unity and belief by the people to go out and protest.”

Like Osorio, attorney Dolores Dobarro agreed that Wednesday’s march was different from past protests and said she was “very hopeful” about the new leadership. Maduro jailed a previous popular opposition leader, Leopoldo Lopez, and banned him from politics.

“Guaido projects calm and we hope that this peaceful protest inspires agreement among those who can help the country emerge from its misery,” Dobarro said. “What’s different this time is that many poor people are participating and they have been the most impacted by the economic crisis.”

Adrian Cordero, a 32-year-old mechanic, said Guaido is “young, has new ideas and a new face who inspires confidence.”

“All of us want a change, a political change that helps us get over this terrifying crisis,” Cordero said. “We’re hoping for a change that enables us to reunite with our family members who have left the country so as not to die of hunger. The country can’t tolerate this situation.”

The march came two days after a group of dissident national guard soldiers attacked a military installation in Caracas, stole weapons and issued a plea for others in the armed forces to join their uprising. Government forces quickly put down the rebellion, arrested 27 and dismissed the mutiny as an isolated incident.