Employers last month added fewer than half as many positions as in October amid soaring virus cases. 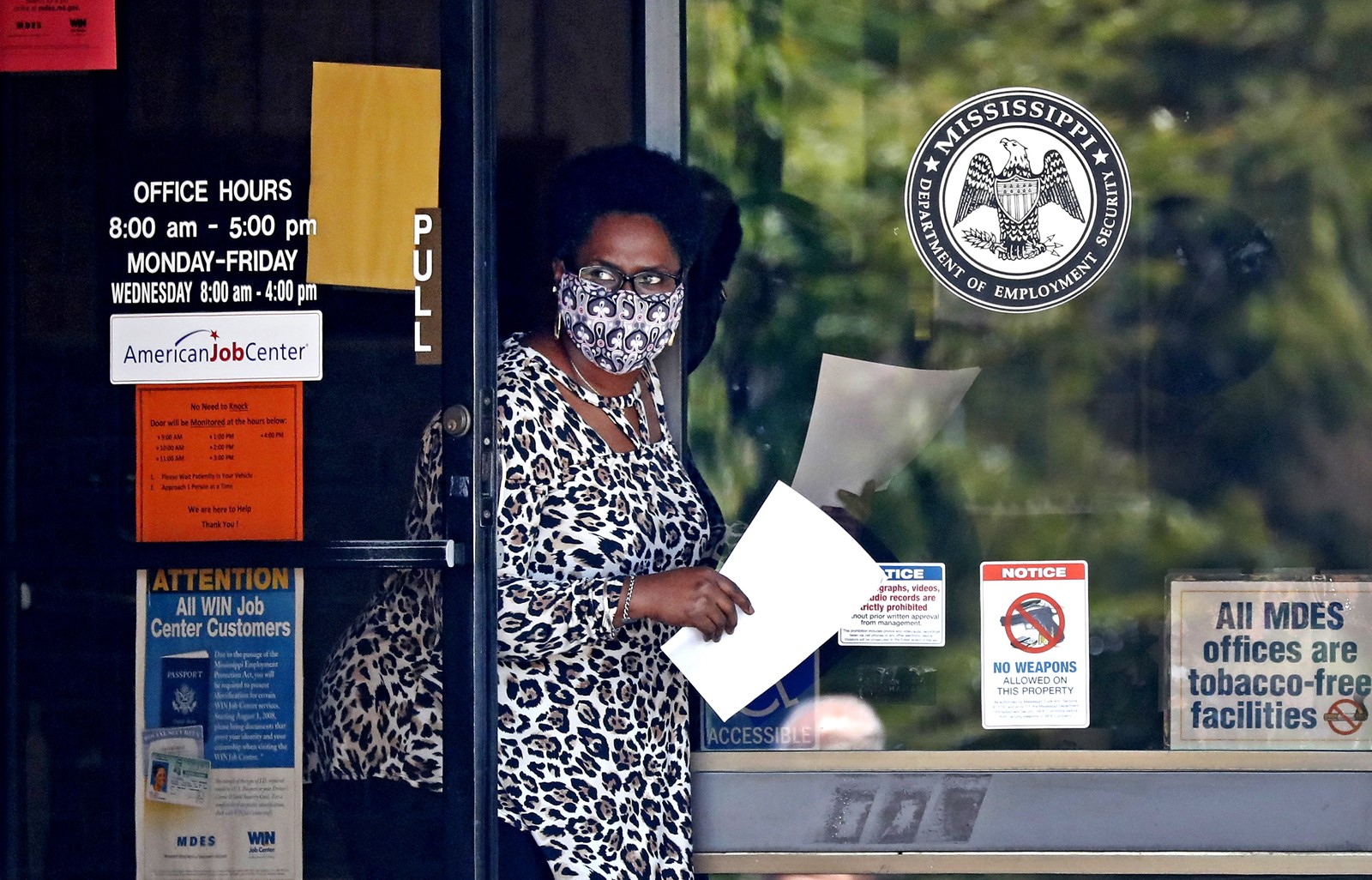 A WORKER at a job center in Pearl, Miss., waits for a client. The U.S. jobs report shows employers added 245,000 jobs in November, down from 610,000 in October. Hundreds of thousands stopped looking for work. (Rogelio V. Solis Associated Press)
PREVIOUS IMAGE

In a troubling new sign that the U.S. economy may be stalling, job growth slowed dramatically in November and more people gave up looking for work altogether.

The jobs report released Friday, which showed that employers added only 245,000 jobs last month — down from 610,000 in October — was the latest sign that the country is essentially in a race between the surging COVID-19 crisis and efforts to deploy an effective vaccine on a large scale.

“Today’s report is both a wake-up call and a warning,” said Nick Bunker, economic research director at Indeed, an online jobs site. “Progress in the labor market has slowed at the worst possible time.”

Given the resistance to mask-wearing and social distancing among many Americans, experts’ predictions for a dark medical front may be matched by equally grim news on the economic front.

“We’re only beginning to see this recessionary dynamic, this downward spiral,” said Erica Groshen, an economist at Cornell University and former commissioner of the Bureau of Labor Statistics, which generates the monthly employment report.

The numbers are likely to increase pressure on Congress to end its deadlock over large-scale new stimulus measures.

“The situation requires urgent action. Americans need help and they need it now,” President-elect Joe Biden said in a statement in which he described the jobs report as “grim” and “dire.”

Biden said he was encouraged by the bipartisan efforts in the Senate around a $900-billion relief package but added that it wasn’t enough. “It’s just the start,” he said.

November’s unemployment rate edged down to 6.7% from 6.9% in October, but that was due to hundreds of thousands of workers dropping out of the labor force, many saying they were prevented from searching for work because of the pandemic.

“A number of workers pulled away from the labor force amid rising coronavirus cases,” Labor Secretary Eugene Scalia said.

He noted that the employment situation varies significantly by state. In October, half the states were at 6% unemployment or lower, but two of the largest states — California and New York — were well above 9%.

California’s jobs report for November will come out in two weeks.

The economy has often surprised economic forecasters with its resilience this year. And the two-tier economic impact of the pandemic is largely holding true: Upper-income, better-educated workers who can work from home are doing pretty well, while those lower down the income scale are being hit hard.

In November, payrolls fell at retailers and restaurants, and hiring was tepid in many sectors, with one notable exception — people stocking and delivering goods for home delivery. More and more consumers are buying groceries and other products online.

The disappointing national employment report may give further motivation to lawmakers on a compromise relief package, and plans to begin administering a vaccine to some people could start this month. But they may not be enough, or on a large enough scale.

Surging hospitalizations and record daily deaths from the coronavirus have sparked new fears of another recession and deepening pain for millions of people whose unemployment benefits are expiring this month.

With the modest job gains in November, the nation has recovered 56% of the 22.2 million jobs lost in March and April. There are still 9.8 million fewer jobs than in February, and increasingly the jobless are victims of permanent layoffs and among the long-term unemployed who will find it harder to get new jobs.

California is further behind, through October having regained just 44% of the 2.6 million jobs it lost, said Michael Bernick, former director of the state’s Employment Development Department.

“The California economy is in a suspended state. Those in secure jobs in government, tech firms and larger nonprofits are continuing, but there is little new hiring and no economic uptick over the past two months,” he said.

Besides federal aid and a vaccine, Bernick pointed to a third factor that was hindering the jobs recovery: renewed closings of in-person instruction at schools, leaving few options, especially for working parents.

The Federal Reserve, in its latest summary of U.S. economic conditions, said “the sharp rise in COVID-19 cases had precipitated more school and plant closings and renewed fears of infection, which have further aggravated labor supply problems, including absenteeism and attrition.”

Until now, the recovery had held up fairly well, in large part because of strong consumer spending for goods that was helped by earlier rounds of expanded unemployment benefits and other federal support for businesses and households.

In fact, overall consumer spending, which accounts for about two-thirds of U.S. economic activity, was down just 2.3% in mid-November from February levels, according to Opportunity Insights, a Harvard-led economic tracking site. In April, spending was down as much as 32.5%.

But with new restrictions and lockdowns, and uncertainties about the path of the pandemic, economists worry that consumers and businesses will pull back again.

If that happens, what in spring began as an extraordinary pandemic-shocked recession could turn into a more ordinary recession caused by permanent job losses and cutbacks in demand for goods and services due to insecurity.

Many of these and other low-paid service, self-employed and part-time workers have been getting by, and paying their housing and other bills, with expanded unemployment benefits. But key programs and extensions are set to run out soon unless Congress acts. By Christmas, some 13.5 million people could be out in the cold.

Many of them “are the very lowest of income workers,” said Michele Evermore, senior policy analyst at the National Employment Law Project.

The Census Bureau, which has been tracking the effects of the pandemic, said that about 8% of people it surveyed in November were behind on rent or mortgage payments, or would probably be so in the next month. And of this group, about one-third reported they were likely to face eviction or foreclosure in the next two months.

In particular, she noted, budget-strained state and local governments will make further cuts in spending, setting back the recovery potentially by years as happened after the Great Recession in 2008-09.

States and local government activity accounts for 12% to 15% of the national economy, she said, and it will be a “massive drag” on growth if there’s no help for the governments. “They’ll be like little anti-stimulus machines,” she said.