Half of those sent back to the country have the coronavirus, health minister says. 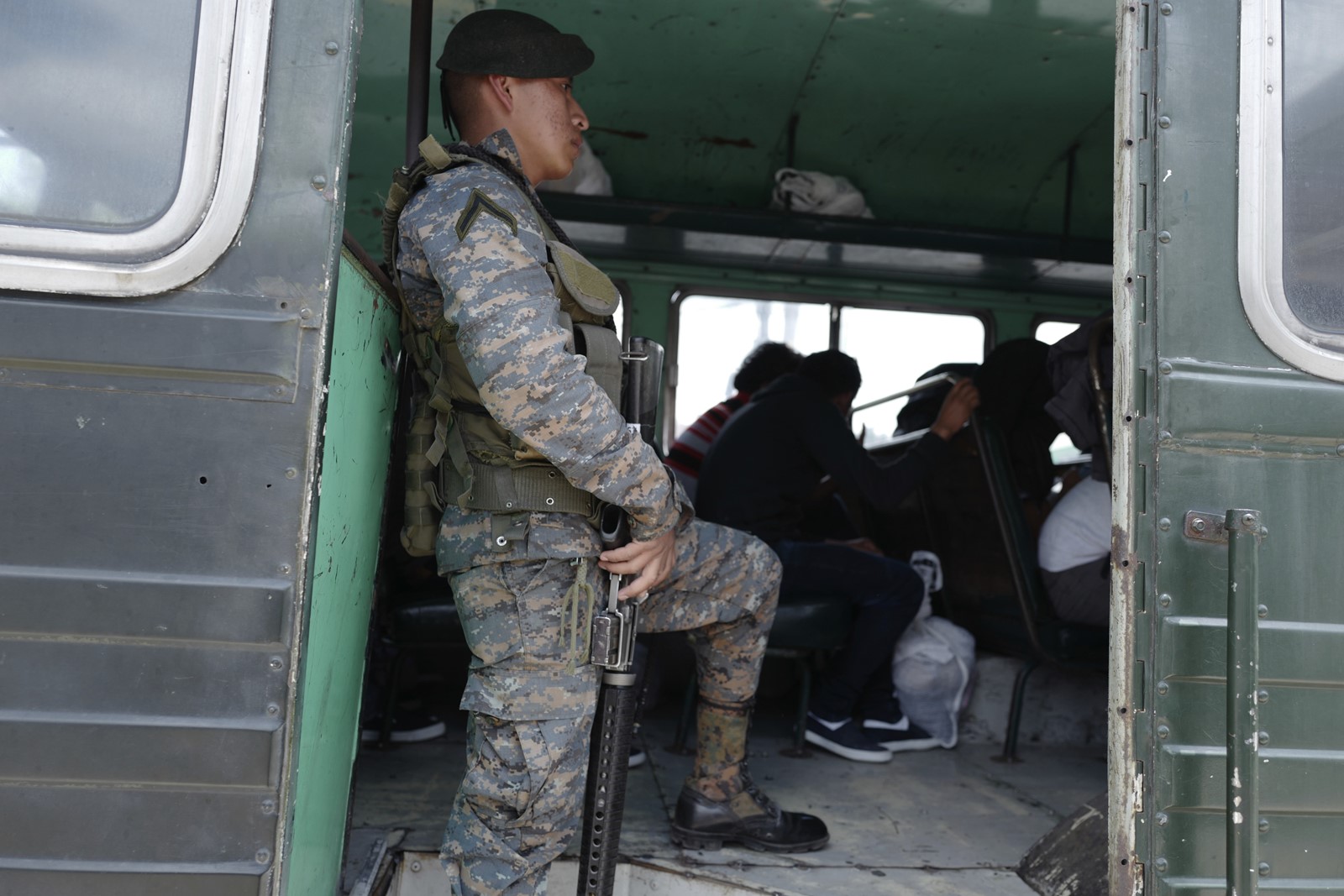 A SOLDIER watches over a bus carrying U.S. deportees upon their return to Guatemala. The Trump administration has threatened sanctions against any country that does not accept deportees during the pandemic. (Morena Perez Joachin For The Times)
PREVIOUS IMAGE

More than half the deportees flown back to Guatemala by U.S. immigration authorities have tested positive for coronavirus, the top Guatemalan health official said Tuesday.

Speaking to reporters in Guatemala City, Hugo Monroy, the minister of health, did not specify a time frame or the total number of deportees who had arrived home with infections.

But hundreds of Guatemalans have been returned in recent weeks, including 182 who arrived Monday on two flights from Texas.

Monroy said that on one flight — which he declined to identify — more than 75% of the deportees tested positive.

But he made clear this was not an isolated incident and said many deportees arrived with fevers and coughs and were immediately tested.

In video later released by the government, Monroy contradicted his earlier statements and said he was referring to just one flight.

The Guatemalan Foreign Ministry said through a spokesman Tuesday that the “official” number of deportees diagnosed with COVID-19 is four, including one who arrived on one of the flights Monday.

A high number of infections among deportees would cast doubt on the official tally of how many of the more than 33,000 migrants in U.S. detention are infected. U.S. immigration officials have said that 77 have tested positive, noting that some of those may no longer be in custody.

The U.S. Department of Homeland Security did not respond to requests for comment.

For weeks, Guatemalan authorities have expressed concerns that the Trump administration could spread the infection in the Central American nation through deportations from the United States.

Guatemala became the first country to halt deportations when it suspended flights on March 17 to allow for both countries to establish sufficient health protocols. But the flights resumed two days later.

On March 30, Guatemalan Vice President Guillermo Castillo “begged” the U.S. to stop deportation flights to Guatemala, according to an interview with a local radio station. The flights were paused again for a week but restarted Monday.

Another flight was scheduled for Tuesday afternoon, but Guatemalan officials did not confirm whether it had arrived.

Guatemala is under a quarantine order and, as of Tuesday, had reported 150 active cases of COVID-19 and five deaths.

In the United States, at least 21 U.S. Immigration and Customs Enforcement employees working at migrant detention centers have tested positive for COVID-19, according to the agency.

That includes 13 at the Alexandria, La., staging facility that has been sending deportation flights to Guatemala and other countries.

An additional 80 ICE employees who work outside of detention have also tested positive. The agency has refused to provide a count for the number of cases among thousands of contractors and personnel at private facilities that contract with the federal government to hold migrants.

The agency has been engaged in an ongoing review to determine which migrants are most “vulnerable” and able to be released from custody as the virus spreads through its detention facilities. Only recently has it begun to test more broadly at facilities that have confirmed cases.

Because of the pandemic, Guatemala is refusing to accept deportees who are not Guatemalan, putting on hold a deal it made with the U.S. last year. Under that arrangement, Guatemala had accepted some 900 Salvadorans and Hondurans who had been denied the opportunity to seek asylum in the U.S.

As for Guatemalan deportees, officials said the first to test positive for COVID-19 was an adult male who arrived March 26 from Mesa, Ariz.

A few minors have arrived with fevers, though U.S. immigration authorities have said that all passengers’ temperatures are taken before boarding and that no one is allowed to make the flight to Guatemala, or anywhere else, with a fever.

On Friday, the White House threatened visa sanctions against any country that does not accept its citizens who are deported from the United States amid the pandemic — a move widely seen as directed at Central America, the biggest source of migrants arriving at the U.S. southern border.

On Monday, U.S. Secretary of State Mike Pompeo said he had notified Congress that the Trump administration would continue “targeted assistance” to Guatemala, Honduras and El Salvador, citing their continued cooperation on immigration and the asylum deals. Since January, the U.S. government has deported more than 11,758 Guatemalans.

Since March 20, when the Centers for Disease Control and Prevention issued an order blocking travelers from Canada and Mexico regardless of country of origin, U.S. officials have expelled nearly 11,000 migrants with minimal processing.

For the first time under the modern immigration system, the mass removals include unaccompanied minors and asylum seekers, two groups specially protected under U.S. law.

In the first week of April alone, Guatemala received about 100 unaccompanied minors expelled from the United States — as many as it took in during all of March.