Runoff in the cards for Bass, Caruso

Neither of the top two L.A. mayoral hopefuls appears likely to win outright in primary. 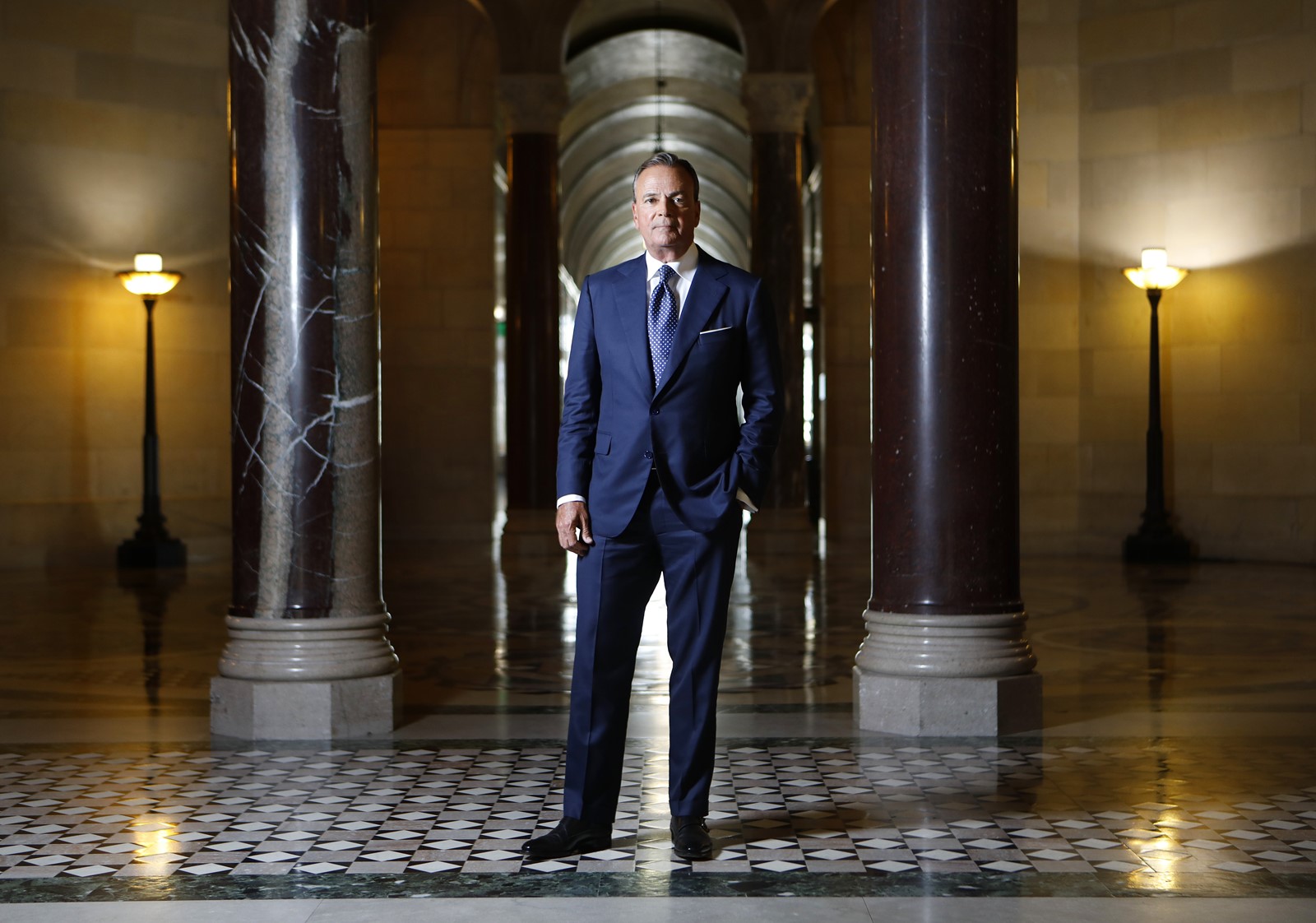 DEVELOPER Rick Caruso and Rep. Karen Bass, shown at City Hall, both appear unlikely to surpass 50% of the vote on Tuesday to avoid a November runoff in the Los Angeles mayor’s race, according to a new poll. (Photographs by Christina House Los Angeles Times) 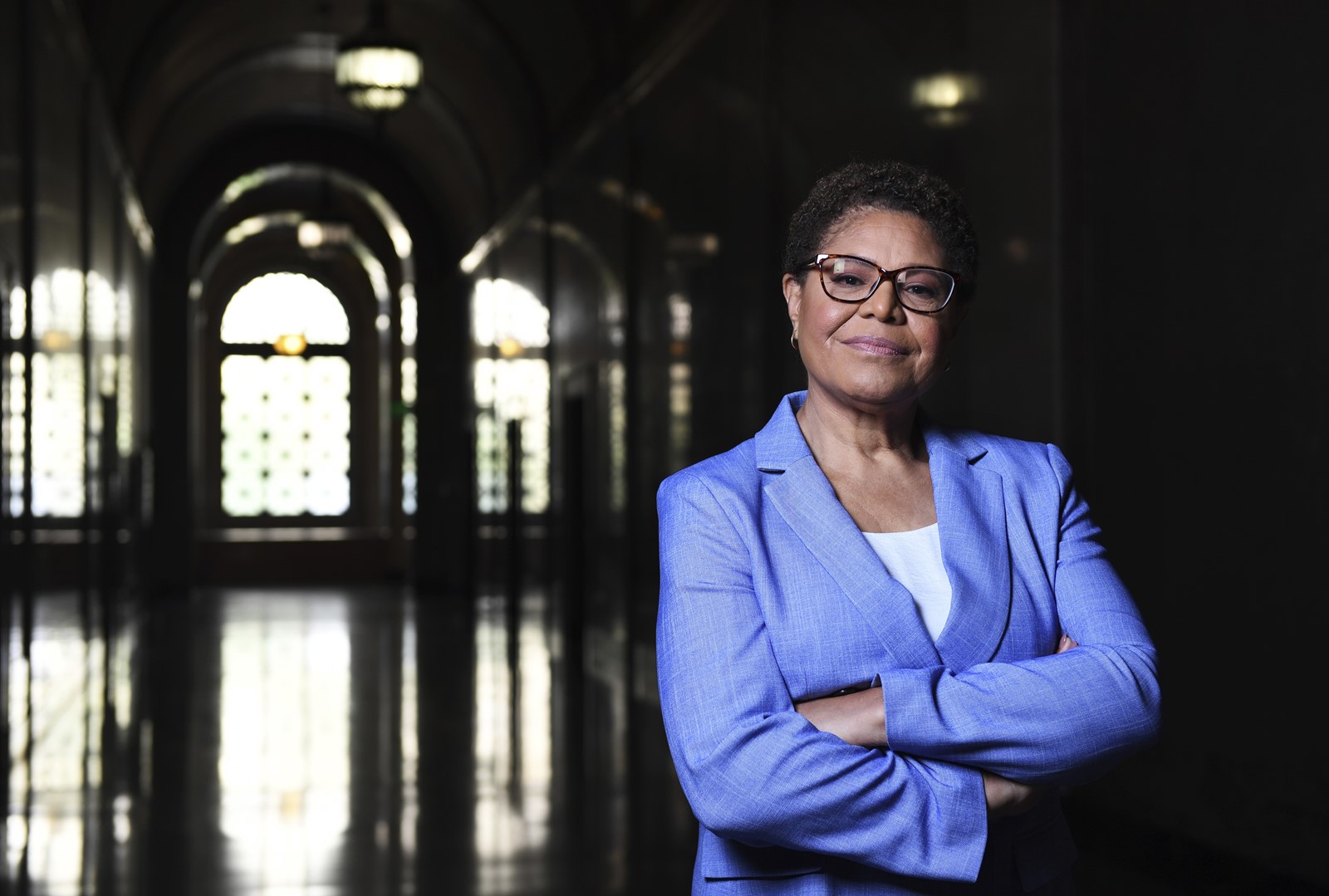 Days before Los Angeles’ first open mayoral primary in nearly a decade, Rep. Karen Bass and Rick Caruso, the billionaire developer, appear headed toward a November runoff, with Bass building a small edge as the campaign moves toward a close.

Bass (D-Los Angeles) is benefiting from strong support among women, who make up a majority of the voters likely to cast ballots, and white liberals, according to a new UC Berkeley Institute of Governmental Studies poll, co-sponsored by the Los Angeles Times.

Bass has support of 38% of likely voters in the poll, which was conducted May 24-31. Caruso, who has bombarded Los Angeles’ airwaves with millions of dollars of advertising, has 32%.

With 15% of likely voters saying they were still undecided, either of the two could still come out on top in the primary, but it’s unlikely either candidate would exceed 50% of the vote to win outright and avoid a November runoff.

The near certainty of Bass and Caruso advancing to the runoff comes after a frantic few weeks of campaigning across the city which has included increasingly personal and partisan attacks being slung from each camp. Caruso supporters have attacked Bass’ attendance record in Congress, while Bass backers have talked nonstop about the businessman previously being registered as a Republican and his previous ties to politicians who oppose abortion.

Since Caruso announced his candidacy in February, Times polling has found the contest to be largely a two-person race, with Caruso and Bass appealing to contrasting bases of support.

Concern about rising crime has provided the driving force for Caruso’s campaign, which early on drew strong support from more conservative Angelenos, especially white voters. Over time, however, he has also won over a growing number of Latino and Black male voters, the poll found.

Bass’ support was slower to consolidate. Since the last Berkeley IGS poll in April, however, previously undecided voters have made up their minds and some other candidates have dropped out of the race.

As that happened, Bass gained ground with the biggest segments of the city’s electorate — her fellow Democrats, liberals and women. She has also maintained a strong lead among Black women.

“It still looks fairly close, though maybe Bass has solidified her position a little bit,” said Eric Schickler, a Berkeley political science professor who is the IGS co-director.

White voters who identify as liberals make up nearly a third of the likely electorate for the primary, the poll found. In April, Bass was ahead of Caruso 40% to 15% with them, and 34% were undecided. Now just 13% of them remain undecided, and her lead with that group has swelled to 66%-8%.

The race features a large gender gap which works to Bass’ advantage. She leads Caruso by 19 points among women, who make up slightly more than half of likely voters, the poll found. He leads by 8 points among men.

But the poll also found some areas in which Caruso has made striking gains. Bass, one of two Black members of the Los Angeles delegation in Congress, had been expected to run away with Black voters. But Caruso has been able to cut into her support by gaining ground among Black men.

Black women favor Bass by a significant margin, but Caruso appears to be at least even and perhaps ahead among Black men. The poll can’t say for sure because margins of error get larger with small subgroups of voters.

A third candidate — Councilman Kevin de León — who previously served in the state Senate and challenged Sen. Dianne Feinstein for her seat in 2018, had hoped to do well among Latino voters. His district is predominantly Latino, and his campaign has been grounded in his personal story of growing up poor.

But De León’s campaign has not gained traction. He’s raised and spent far less money, and the poll found him in third place with 6%, which is where he was in April.

The fact that he’s drawing support from just 1 in 5 Latino likely voters will be a disappointment for De León, said USC professor Manuel Pastor.

“It’s not surprising to me that Caruso is doing well here,” Pastor said. “What we might be seeing is that being a businessperson, which can lead to some suspicion on the part of progressives, doesn’t cause as much suspicion it seems with Latino voters.”

Rounding out the field, activist Gina Viola has 2% support, as does Alex Gruenenfelder Smith, a 20-year-old Echo Park Neighborhood Council member. Both are running grass-roots campaigns aimed at the city’s progressive voters.

This is the third poll of the mayoral race that The Times conducted in partnership with the UC Berkeley Institute of Governmental Studies in advance of the primary on Tuesday. The poll was conducted online in English and Spanish, among 1,204 registered voters in the city of Los Angeles. Based on prior voting history and stated interest in the June election, the poll identified 816 voters as likely to cast ballots.

The margin of sampling error for the likely voter sample is approximately 3.5% in either direction. A full description of the poll methodology is available on the IGS website.

Among the broader universe of registered voters, the race is within the margin of error between Bass at 25% and Caruso at 23% with 35% of voters undecided.

Looking ahead at a head-to-head November runoff, Bass leads Caruso 37%-33% among all registered voters with 30% undecided.

The November election always draws a significantly larger turnout than the June primary, and in heavily Democratic Los Angeles, that bigger vote probably works to Bass’ advantage, many political experts say. But with the race starting off close and many voters undecided, Caruso’s ability to spend huge sums on the campaign makes the outcome unpredictable.

Paul Mitchell, vice president of Political Data Inc. and a California politics expert, noted Caruso’s relative popularity with Latinos may help him in November when more people are voting.

“Are those additional voters automatically in the Karen Bass camp like they would be if she was running against Larry Elder?” Mitchell asked. “It’s not as cut and dry, I think, as people might think. There might be pockets of that additional voter pool that comes in the general that are actually good for Caruso.”

Caruso already has poured nearly $40 million of his own wealth into the race — much of that spent on advertising. On the other side, Bass and the independent expenditure committee supporting her have spent just over $5 million.

His money has meant Caruso’s visage has been ubiquitous on the airwaves, the radio and on mailers in voters’ mailboxes. His message has been rooted in three issues: crime, homelessness and public corruption.

“This race is all about a thematic candidate like Caruso saying he’s had enough, we need change and is a can-do business guy, versus yet another friendly Democratic politician who is afraid to rock the boat,” said Republican strategist Mike Murphy, who lives in Los Angeles, is friends with Caruso and has worked with him in the past.

“There will be more casual voters, and that’s an opening in the general election, and the city is mad enough about City Hall corruption and homelessness,” Murphy said.

In the general election, crime probably will continue to play a key role in the race. Caruso has drawn strong support from voters who say they feel less safe now — just under half of the likely voters.

The share of likely voters who feel less safe, 48%, is up from what it was in the recent past, but safety has not become as universal a concern as homelessness. Just over half the likely voters said they feel about as safe as they did four years ago (43%) or feel safer (9%).

A key difference between Bass and Caruso is how large they think the LAPD should be.

Of people who said they’d be voting for Bass in the primary, 43% said they wanted the department to grow at least some. Nearly all, 95%, of Caruso supporters voiced that preference.

Nearly half of Caruso’s voters approve of the job the LAPD is doing, while 3 in 10 have no opinion and fewer than 1 in 4 disapprove. Bass’ voters are nearly a mirror image, with nearly half disapproving of the police department’s work, almost 4 in 10 voicing no opinion and about 3 in 10 disapproving.

In this poll, the pessimism about government’s handling of the homelessness crisis remained ever present. Nearly 90% of likely voters said homelessness in California had worsened in the last few years.

About 4 in 10 likely voters said that government in California “has gone too far in upholding the rights of the homeless at the expense of local residents,” while about 3 in 10 said the opposite. Caruso supporters were much more likely to believe the government has gone too far to uphold homeless people’s rights.

Similarly, voters were about evenly split (47%-44%) on whether government should prioritize clearing encampments from parks and neighborhoods or providing services to individuals living within encampments.

“Seeing homelessness as a problem is a fairly universal thing, regardless of one’s ideology or partisanship,” Schickler said. “If you were getting into the public policy solutions there, you might get some differences.”