Migrants targeted by Trump have same quest as others 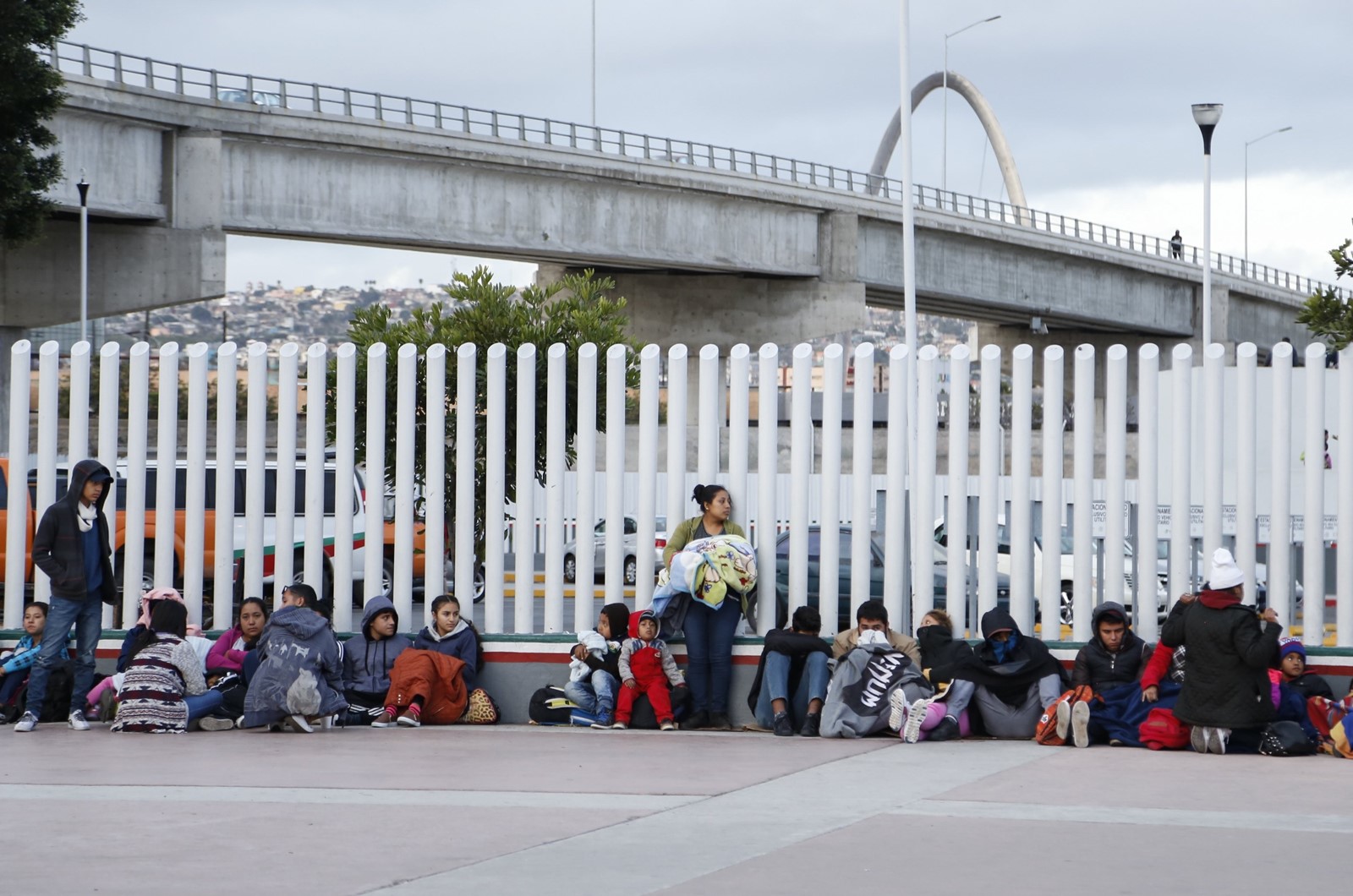 As the remnants of a migrant caravan targeted by President Trump arrived this week in Mexicali, Mexico, more than 100 migrants — mostly from Mexico — were already waiting in a plaza at the border between Tijuana and San Diego to seek asylum.

While the caravan cast a spotlight on a specific group of people slowly traveling north to the border to seek asylum, the U.S. side of the port at San Ysidro regularly bustles with people from all over the world asking for protection.

When more asylum seekers arrive at the port than Customs and Border Protection officers can process at one time, migrants end up milling in the plaza outside El Chaparral, the name of Mexico’s half of the port, to find out whether they’ll have to return another day to make their formal request. The port had a backlog in December when some asylum seekers waited weeks in Tijuana for their turn to ask for help.

A man from the Mexican state of Michoacan became a de facto leader of the group waiting after its arrival Tuesday, negotiating with U.S. officials on how many people could come into the port of entry and when.

He, along with a few other volunteers, made a list throughout the day of those who wanted to ask for asylum. By midafternoon, the count was up to 388 and growing, though not everyone stayed to see whether they would get in that day.

“The situation is very bad here. We have a lot of problems,” the man said. “There’s a lot of violence in Mexico.”

He said he had fled his hometown under cover and feared what might happen to him if the gangs found out that he’d left.

“I’d rather be locked up in the U.S. than killed here in Mexico,” he said.

He’d been waiting in Tijuana for seven days to request asylum.

If migrants tell border officials that they are afraid to go back to their home countries, under U.S. law the officials must process them for asylum. The asylum seekers generally wait in detention facilities until officers interview them to gauge the credibility of their claims.

If officers believe their claims, then the immigrants wait their turn for judges to hear their cases and make a final determination. During those hearings, asylum seekers have to show that they have been persecuted because of their race, religion, nationality, political opinion or membership in a social group, including sexual orientation.

A little before 3 p.m., U.S. officials told the man from Michoacan to bring in the first 10 people on the list. Carrying a duffle bag for one woman who had a small child with her, he escorted the small group, which included a family with two teenage boys from the state of Chihuahua.

When they arrived at the gate to the U.S. section of the port, the man wished them good luck and urged one of the boys to study hard and stay out of trouble.

As the afternoon passed, children played in the plaza, kicking an empty water bottle as if it were a soccer ball. Most of the adults sought shelter from the sun under a few nearby trees. Several shared food they were able to purchase with the little money they had.

One woman from Honduras, who had been part of the caravan until the group received temporary documents from Mexico to travel north, waited nervously with her 2-year-old daughter. Her husband had already sought asylum with their 4-year-old daughter and had gone on to Atlanta to live with a sponsor.

She worried about stories she’d heard about border officials taking children away from their parents, even though her husband hadn’t had any problems. A Mexican official had told the group members that morning that they couldn’t ask for asylum in the United States.

As her daughter napped, she read Psalm 91 quietly to herself, asking God for confidence and strength.

She recalled the bus rides from city to city that she took with her family to escape the violence in her hometown of La Ceiba.

She said she was scared to go outside with her children, even in the daytime, because gangs didn’t care if someone was carrying a child. Gang members would ask for money and punish those who didn’t deliver.

As the afternoon wore on, the man from Michoacan found out that officers had agreed to take in 80 more people for processing. He asked everyone to sit down and began reading down the list, asking people to line up across the plaza.

He called the woman from Honduras, and after she gathered her bags filled with clothing and a teddy bear people had donated to her in Mexico, she took her place in line — No. 23.

Tourists filmed the scene on their phones as the migrants walked to the port of entry.

The man from Michoacan carefully counted that he had 80 people before telling the rest waiting in the plaza to try again tomorrow.

One man clutched his belongings in a trash bag, and the Honduran woman whispered prayers as the procession wound up a ramp to the hallway that leads to the United States. Around 5:30 p.m., Border Patrol officers began taking them inside the port facility, cautioning that anyone past No. 80 would have to turn around and try again another day.