A slow dance with North Korea 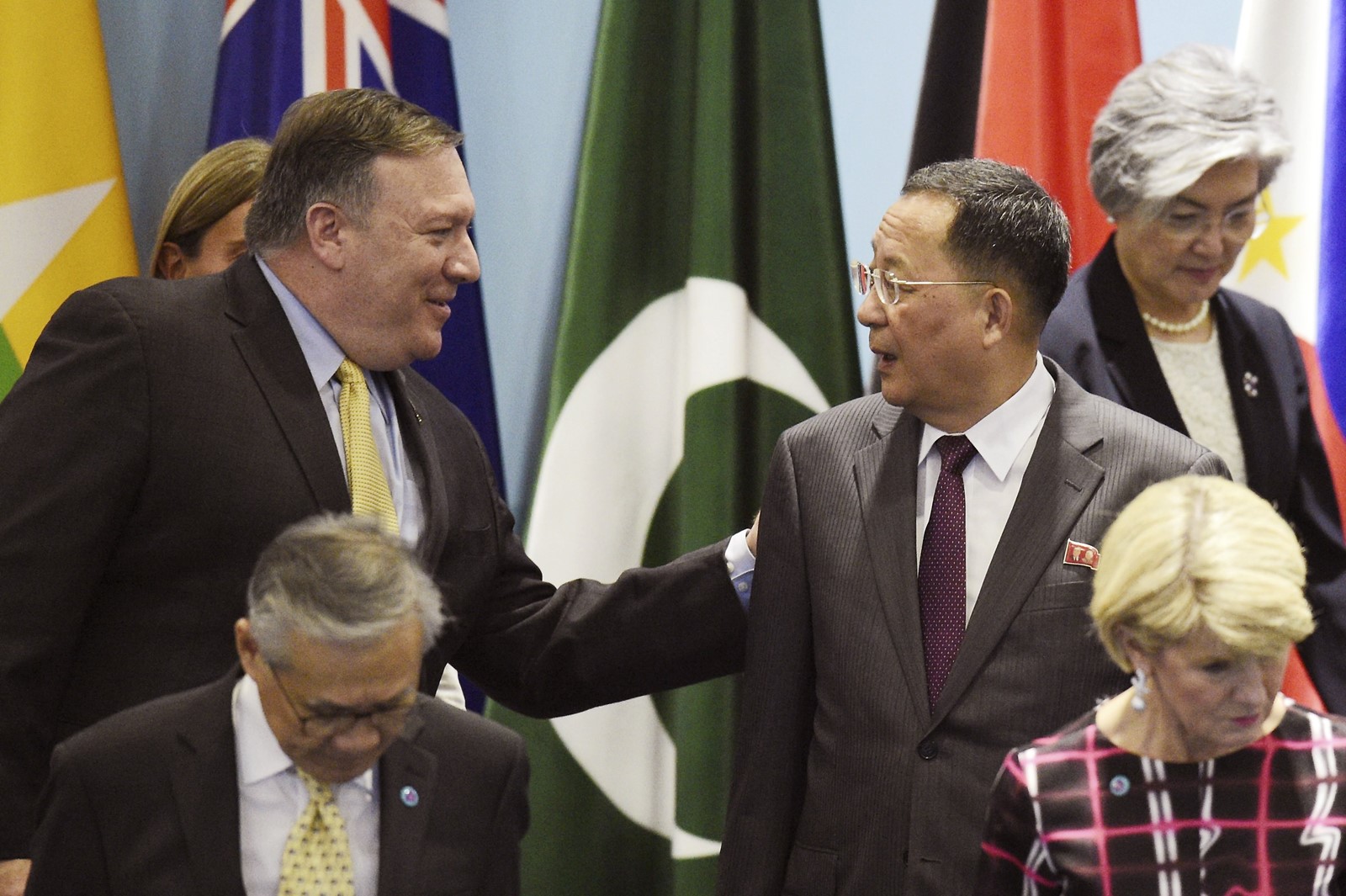 President Trump has again exchanged friendly letters with North Korean dictator Kim Jong Un, even as his top diplomat attempted this weekend in Asia to fortify international pressure on the nuclear-armed country to give up its weaponry.

Secretary of State Michael R. Pompeo on Saturday smiled and shook hands with his North Korean counterpart at a regional conference in Singapore, just before the letter was handed over. Minutes later, with Pompeo gone, the North Korean foreign minister, Ri Yong Ho, unleashed a stinging critique of Washington and the sort of demands that Pompeo came to deliver.

The back-and-forth illustrated the tricky — and slow — diplomacy the administration is tackling since Trump’s summit with Kim nearly two months ago, as it seeks to force North Korea to get rid of its nuclear arsenal.

Kim agreed to “denuclearize,” the Trump administration has said, in what it portrays as a major diplomatic triumph. But North Korea has yet to take any significant steps to that end.

The State Department said the letter from Trump to Kim was in response to what Trump said was a “nice” missive from the North Korean leader earlier in the week.

After Pompeo exchanged greetings with Ri at the conference of foreign ministers from Southeast Asia, Trump’s letter was handed over by Sung Kim, U.S. ambassador to the Philippines, who has been a key figure in the Washington-Pyongyang negotiations this year.

“I agree,” Ri responded. “There are many productive conversations to be had.”

Yet minutes later, and after Pompeo had left the conference for meetings in nearby Indonesia, Ri took the Trump administration to task for its insistent demands.

“What is alarming,” Ri said, “is the insistent moves manifested within the U.S. to go back to the old — far from its leader’s intention.”

The North Korean leadership prefers to focus on Trump’s vaguely worded and easily fungible requirements, rather than the detailed and specific criteria set out by U.S. diplomats and experienced negotiators now trying to put the Trump-Kim commitment into concrete, verifiable terms.

Trump’s one-on-one meeting with Kim, also held in Singapore, in June, was the first sit-down of an incumbent U.S. president and a North Korean leader, affording the young Kim a long-desired global recognition.

The United States, in exchange, has received little. North Korea did agree to revive a repatriation program and last week, as a good-faith gesture, returned the possible remains of some U.S. soldiers killed in the 1950s-era Korean War. Many more soldiers remain unaccounted for.

Yet North Korea’s nuclear disarmament is the primary goal, and still elusive. For decades, Pyongyang has found ways to wiggle out of requirements that the United States and the international community have imposed on North Korea as part of earlier, failed agreements on nuclear disarmament.

Trump thinks he has found a new formula through his personal diplomacy with Kim, yet his lack of specificity has allowed Pyongyang even more leeway.

Pompeo acknowledged to journalists traveling with him to Singapore, as well as to Indonesia’s capital, Jakarta, and to Kuala Lumpur, the capital of Malaysia, that there was a “ways to go” in pushing North Korea toward denuclearization.

Trump, by contrast, has continued to claim significant progress, even success, in his public statements and tweets. U.S. officials say that, far from content with North Korea’s behavior, they are “concerned” about recent intelligence reports that seem to show new construction at the country’s nuclear facilities.

“If these reports prove accurate, and we have every reason to believe that they are, that would be in violation,” Pompeo said.

A fundamental problem, say experts and former negotiators, is that the two governments don’t even agree on the meaning of the word “denuclearization.”

The U.S. insists on a complete, “final” and verifiable removal of North Korea’s nuclear weapons and production facilities. But North Korea defines denuclearization as the removal of nuclear power through the Korean peninsula — including the long-standing U.S. military presence in South Korea, Japan and other parts of the region.

The conference in Singapore was hosted by the Assn. of Southeast Asian Nations, which includes more than two dozen countries from the region as well as “partner” countries including the U.S., Russia, Iran and several European states. Many of those have been involved in the U.S.-led efforts to force North Korea to rein in its nuclear ambitions.

For Pompeo, the conference presented an opportunity to rally Asian support in reinforcing the international sanctions against North Korea that had succeeded in crippling its economy and coaxing it toward negotiations.

But many nations — including, critically, China — were already relaxing the sanctions after Trump’s Singapore meeting with Kim, and the president’s premature pronouncement there that it was no longer necessary to speak of “maximum pressure.”

Pompeo insisted to reporters that the sanctions regime continues to have a significant impact and remains largely in place. Yet the secretary of State, at the forum, criticized the commitment of other countries.

He warned Russia not to cheat and help North Korea circumvent the sanctions. “We expect the Russians, and all countries, to abide to the [United Nations] resolutions and enforce sanctions on North Korea,” Pompeo said. “Any violation that detracts from the world’s goal of finally, fully denuclearizing North Korea would be something that America would take very seriously.”

Pompeo took a softer approach, at least publicly, with China, North Korea’s most important trade and political ally. He and Chinese Foreign Minister Wang Yi were all smiles when they met on the margins of the ASEAN conference.

“Our cooperation ...” Pompeo tweeted in reference to himself and Wang, “sends a strong signal to the region that, despite differences, #China and the US can work together to get important work done.”

Pompeo has not addressed how Washington hopes to continue to enlist Beijing’s essential support in pressuring North Korea when Trump is also escalating a trade war with China, the world’s second-largest economy.

China, according to U.S. intelligence reports, has had the greatest impact in relaxing sanctions on North Korea. The sanctions, agreed to unanimously by the United Nations Security Council, cut into approximately 90% of Pyongyang’s trade income. Yet China, as North Korea’s chief trading partner, accounted for much of that reduction.