The stores are banned in unincorporated San Diego County, but not on reservations. 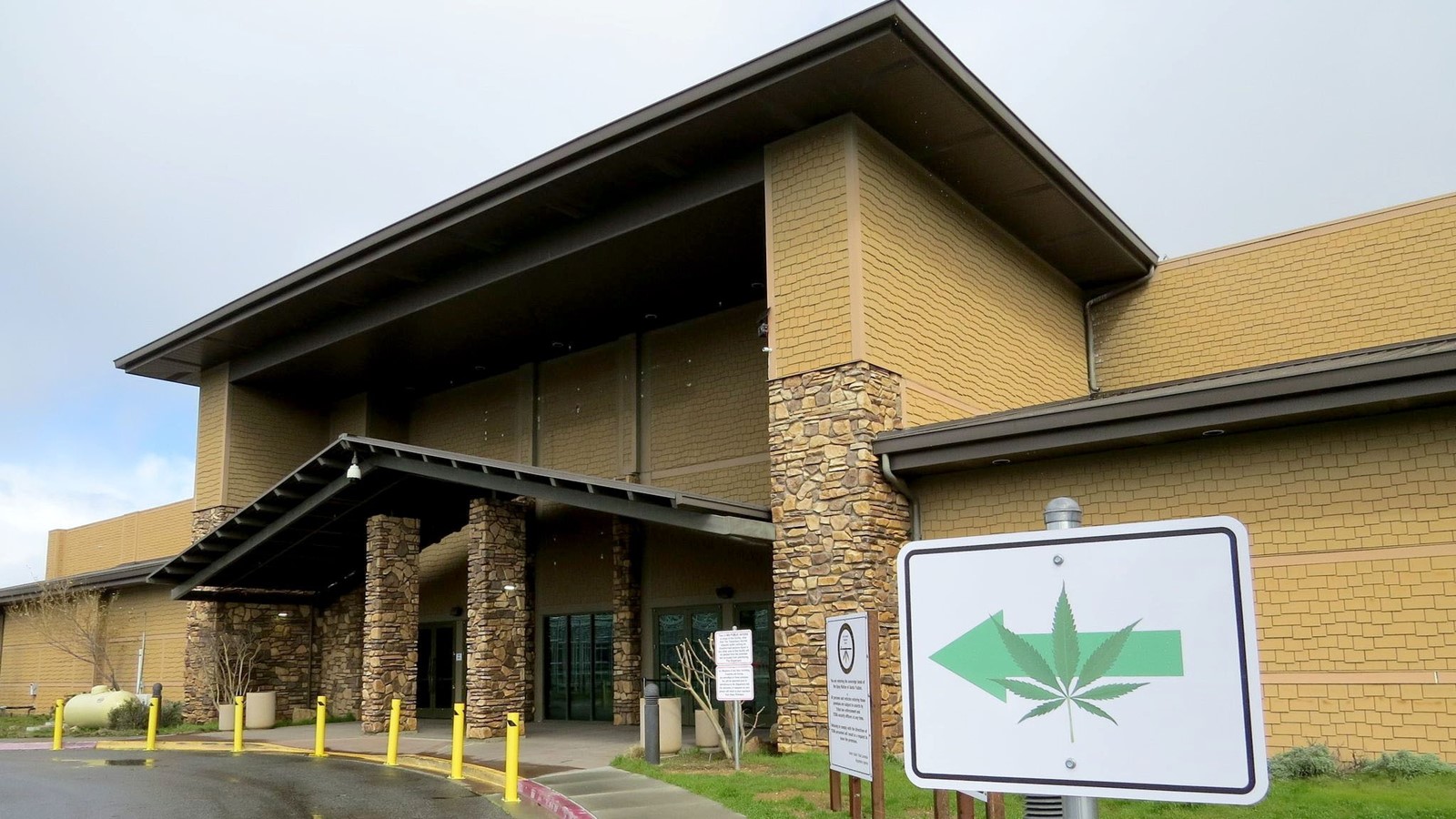 THE IIPAY NATION of Santa Ysabel turned a struggling casino into a marijuana dispensary. It isn’t licensed by California, and it doesn’t need to be, the state says. (Photographs by J. Harry Jones San Diego Union-Tribune) 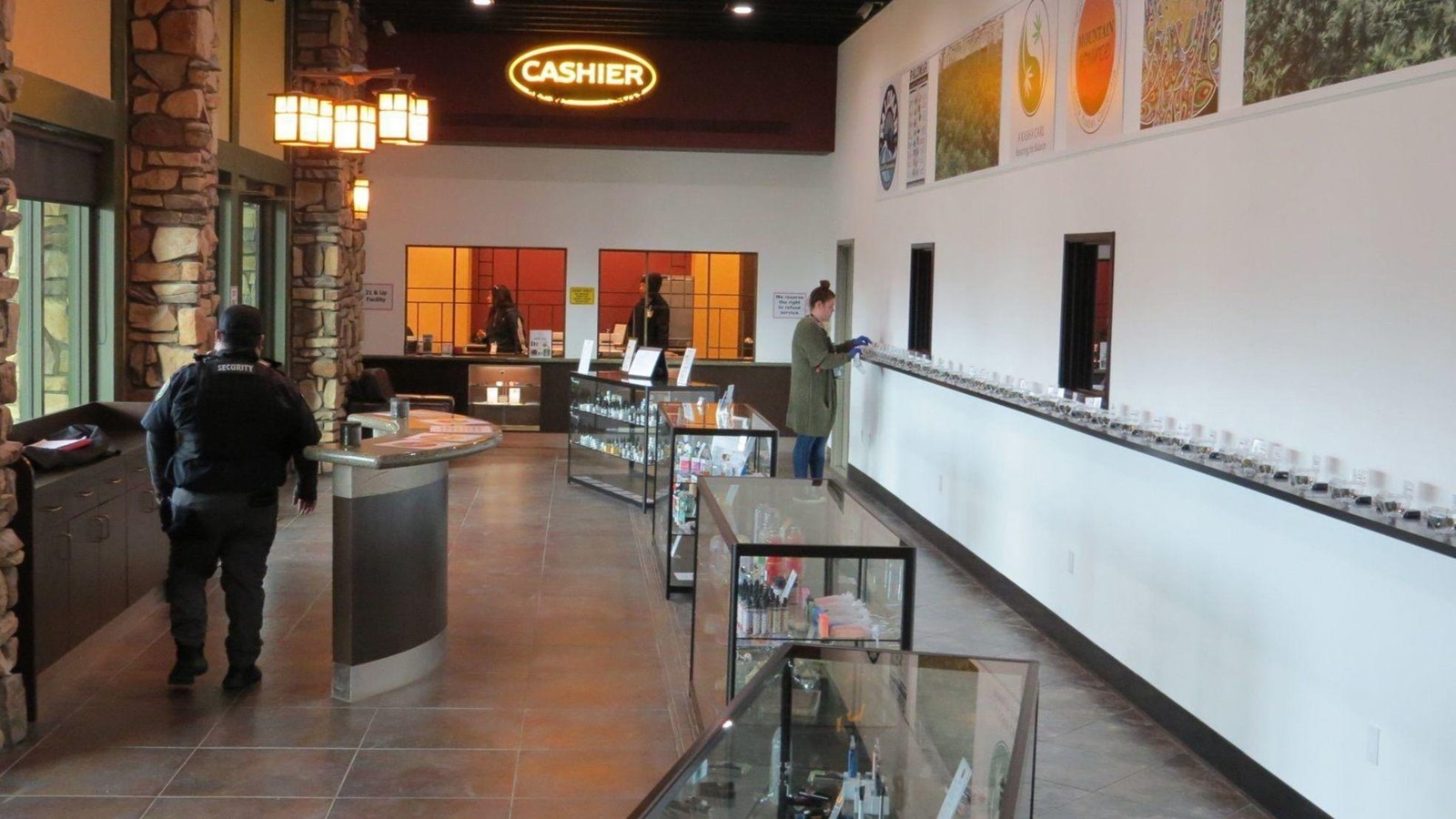 THE STORE could set a precedent for other tribes — something that some residents and county officials are wary of. “Our preliminary review of this is that they do need a license,” the head county supervisor said. ()
PREVIOUS IMAGE

The Iipay Nation of Santa Ysabel last month opened a marijuana dispensary inside what once was the tribe’s casino off California 79 south of Lake Henshaw.

It was the first tribe in San Diego County to enter the lucrative marijuana business. Other local tribes are expected to follow suit, potentially setting up a confrontation with county officials, who have banned the operations in the unincorporated areas, though they have no control over the reservations.

The tribes have reached out to the state asking to join the larger licensed cannabis network but so far have been rebuffed.

The Santa Ysabel tribe is creating a road map, perhaps with a few hazard signs, that others may soon follow.

Customers who visit its eastern San Diego County homeland need only drive to the gated entrance, show a driver’s license to an armed guard, then follow the signs showing a marijuana leaf and an arrow up the nearly mile-long road to the former casino, which closed in 2014 after seven years of failed operation.

There, sales representatives taking orders on their iPads outline the offerings, including pain cream, edibles and dozens of varieties of pot.

The retail operation complements the tribe’s extensive cannabis-growing and byproduct-manufacturing operation that began several years ago, both inside the former casino and in adjacent greenhouses.

The dispensary is not licensed by the California Bureau of Cannabis Control, but it doesn’t need to be, the state says, as long as the tribe is selling marijuana that is grown and sold on the reservation.

The dispensary has upset some residents in the backcountry around Julian who worry about impaired drivers on the region’s curvy roads.

More important, they fear Santa Ysabel could be setting a precedent for other tribes whose reservations dot the landscape in rural San Diego County.

Jean Duffy, a Julian resident of 25 years, was one of several residents who successfully urged the county’s Board of Supervisors to ban marijuana sales in the unincorporated parts of the county.

Under Proposition 64, the measure approved in 2016 legalizing recreational marijuana, local jurisdictions were given the ability to decide whether dispensaries should be allowed. Some cities in San Diego County allow the sales, others do not. The county does not in the areas the supervisors control.

“It was a big deal when they voted to prohibit,” Duffy said. “When the reservation decided it wanted to start cultivating, we met with them as well and talked to them about all of the reasons why we didn’t want it in our community.”

She said it was clear at the time the financially strapped tribe was going to go ahead with its cultivation plans, but she said she was told there would be no sales.

She and others in the community have complained to the new Bureau of Cannabis Control, but the state says a license is not needed as long as the activity is contained within the sovereign nation.

Dating to 1831, the U.S. Supreme Court has recognized that Native American nations have the full constitutional right to manage their own affairs, govern themselves and engage in legal and political relationships with the federal government.

“If they’re growing and processing and selling their own cannabis, that’s their right,” said state cannabis bureau spokesman Alex Traverso. “However, if they’re selling cannabis or other goods that came from the California market, that’s not allowed without a state license.”

The tribe has established its own oversight group, the Santa Ysabel Tribal Cannabis Regulatory Agency.

Its executive director, Dave Vialpando, said Saturday that the tribe and about two dozen others that are part of the California Native American Cannabis Assn., or CNACA, want to work with the state and enter the licensed California cannabis market. But state officials won’t let them.

Vialpando said that Proposition 64 made no provisions for tribal lands and that efforts in Sacramento to change the law to allow Native Americans to get licensed have failed because the state is insisting the tribes give up their sovereign powers.

Last year, he said, Santa Ysabel established new rules allowing it to open the dispensary. The tribe leases space inside the old casino to eight different private cannabis operations. Their products can be sold only in the dispensary or to dispensaries operated by other tribes within the state.

There are no other tribal dispensaries in San Diego County; however, Vialpando said, several local Indian nations are in the process of establishing operations. He wouldn’t say which local tribes, but four others are listed as members of CNACA: Campo, Manzanita, Sycuan and Los Coyotes.

Dianne Jacob, chairwoman of the county Board of Supervisors, said that she thinks it’s possible the tribe is not within its rights to run a dispensary and that a letter will soon be sent to the state asking for clarification.

“I’m really concerned mainly because the county of San Diego has a ban on dispensaries,” she said. “Our preliminary review of this is that they do need a license. We’re going to find out from our counsel and pursue it from there.”

Jacob also wonders who the financial backers of the operation are and “who’s regulating them, and are they operating in the dark?”

She said there are a lot of questions. “We really need to dig deeper and find out more about this.”

The tribe is quite open about the operation on its website. It lists a set of rules for customers that include provisions that sealed packages cannot be opened on the grounds, that no one under 21 be allowed on the premises, and that nothing can be consumed at the retail establishment.

The regulations state that purchased cannabis-containing products can’t be resold and that a customer can’t purchase items for someone else. Weapons cannot be brought onto the property and customers should not operate a motor vehicle while under the influence of cannabis, according to the rules.

The San Diego County Sheriff’s Department, which has been active in recent years shutting down illegal dispensaries in its unincorporated jurisdictions, issued a statement about Santa Ysabel last week:

“The Sheriff’s Department continues to work to enforce all violations of state law including those related to marijuana. As you know, the legal landscape is continuously changing in this area and difficult to navigate. We do not condone any operation that is not properly licensed or regulated. We continue to evaluate Public Law 280 and our ability to enforce regulatory ordinances on Tribal Lands. We are unable to answer specific questions related to Santa Ysabel and any potential review of their operations.”

Public Law 280 is a federal statute enacted by Congress in 1953 that enabled states to assume criminal, as well as civil, jurisdiction in matters involving Native Americans as litigants on reservation land.

In 2007, when the Santa Ysabel Resort and Casino opened on a hillside off California 79 overlooking Lake Henshaw and Palomar Mountain, the tribe envisioned building a hotel to serve the hordes of gamblers who would surely flock there. That never happened; there were too many other casinos closer to San Diego and major transportation corridors such as Interstate 15.

The 700-member Santa Ysabel tribe had watched some of its neighbors get rich but saw its own prospects evaporating. The casino was shuttered in 2014 with the tribe owing tens of millions of dollars to creditors, including several million to the county.

Vialpando acknowledged that the remote location of the dispensary might discourage business, but he said other factors should make it very attractive to consumers.

He said the products being sold are better than can be found in licensed dispensaries and cost quite a bit less.

“Not only is it of a higher quality but is being sold at a much lower price,” he said. “Per gram cost is about half of what it would be on a non-tribal facility.”

The tribe doesn’t charge the 18% tax on every sale, and there are no transportation costs because the cannabis is grown on-site.

The retail operation, located where the front of the casino once was, is known as the Mountain Source Dispensary. The growing and manufacturing part of the operation is known as the Santa Ysabel Botanical Facility.

The tribe also now operates a tobacco-only smoke shop located right off the highway just before customers get to the guarded gate. “Smoke Shop” banners sit in front of the entrance along the highway, and a large billboard about three miles south of the former casino advertises the smoke shop, though it does not indicate marijuana is also sold on the reservation.

Vialpando said that advertising will come but that the tribe wanted to have a “soft launch” for the new dispensary to make sure everything was ready before marketing began.

Duffy and others in the region worry that other local tribes will follow Santa Ysabel’s lead.

“I think this is going to be one of those issues that is going to come up again,” she said. “We have more tribes in the area than anywhere. [The government] needs to figure this issue out because I think other tribes will go this same route. Prop. 64 gave us local control. Communities have the power to say if we want them in our communities or not. If there are dispensaries on all these reservations, that’s taking away our local control. It’s a big issue.”

Allison Reyes, 24, grew up in the Julian area and spoke before the county’s Planning Commission in 2016, urging them to ban dispensaries in rural areas.

She said the opening of the tribe’s dispensary seems like a step backward.

“Regardless of the legality, I’ve seen firsthand the harm this can do,” she said. “It’s just a shame and a bummer. I feel like when we spoke at the Planning Commission I understood that regardless of the state legalization we were able in our communities to make that decision for ourselves and we did that. We did everything according to how we were supposed to do it. For this sort of loophole to happen, it’s just a shame.”

Vialpando said the tribe wants to work with the community. He notes there have been no law enforcement calls involving the cannabis operation since the tribe got into the cannabis businesses three years ago, because the facility has no neighbors and security measures are as good as can be found anywhere.

“We would invite [residents of the greater Julian area] to come up and talk to us,” he said. “The tribe is just as concerned as the surrounding community with the abuse potential of all drugs, not just cannabis.”