His campaign hopes voters don’t hold him responsible for rising virus deaths and an economy in free fall. 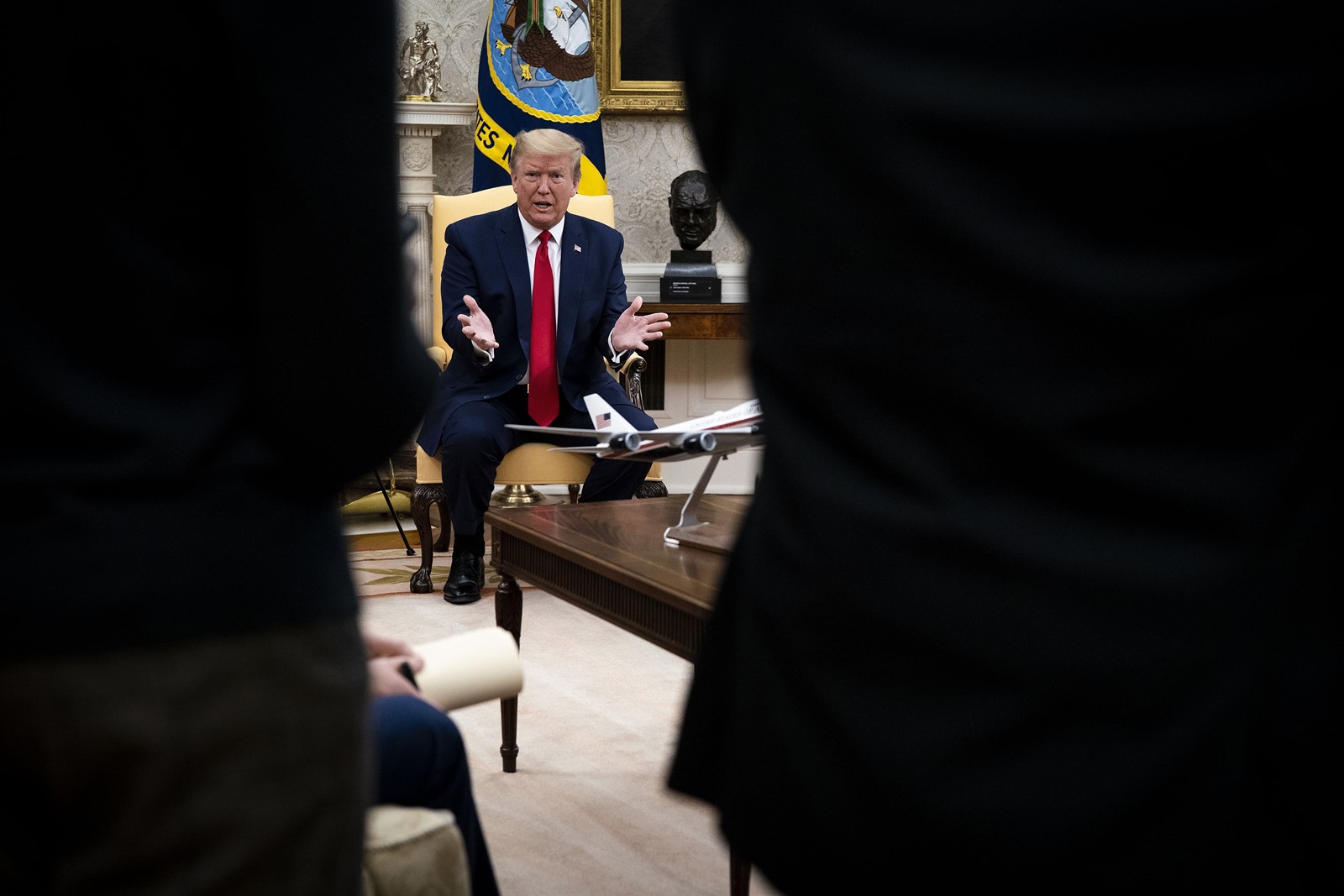 PRESIDENT TRUMP, shown Thursday at the White House, says he does not take responsibility for the damage caused by the pandemic, including job losses. (Doug Mills Pool Photo)
PREVIOUS IMAGE

With unemployment at its worst rate since the Great Depression, and deaths from COVID-19 still rising in most of the country, President Trump argued Friday that Americans should not hold him responsible for the calamity on his watch.

Less than six months before election day, Trump’s new campaign message — don’t blame him — is a risky bet that voters will credit his efforts to fight the pandemic and revive the moribund economy, and not hold him accountable for the administration’s much-criticized response and the 75,000 U.S. deaths so far, the most of any country.

In an lengthy interview on “Fox & Friends,” Trump appeared to dismiss the stunning spike in jobless claims — 20.5 million in April alone, putting the unemployment rate at 14.7%, the highest since 1933 — as beyond his control.

“It’s fully expected, there’s no surprise, everybody knows that,” Trump said. “Even the Democrats aren’t blaming me for that. But what I can do is, I’ll bring it back.”

The message, which Democrats quickly rejected, echoed Trump’s not-my-fault claim after Dr. Anthony Fauci, the head of the National Institute of Allergy and Infectious Diseases, told Congress on March 12 that the government’s lack of widespread testing for the coronavirus was “a failing.”

“I don’t take responsibility at all,” Trump said the next day, although he had downplayed the danger of the virus for weeks.

No president likes taking blame when things go bad, but it’s unusual by any historic standard for a “wartime president,” as Trump has called himself, to adamantly declare his own lack of influence or culpability.

Franklin D. Roosevelt, elected after his predecessor was turned out of office for decisions that exacerbated the Great Depression, pledged to turn the calamity into an opportunity. “We are going to make a country in which no one is left out,” he vowed. The sign on Harry Truman’s desk during the early Cold War became his legacy: “The buck stops here.”

“Usually Americans like it when you take blame, because you are the most powerful person in the world,” said Douglas Brinkley, a Rice University presidential historian.

“The presidents that we really look up to in retrospect are ones who knew how to do things decisively, but took consequences for their actions.”

Most presidents acknowledge a degree of humility if not fallibility and ask fellow Americans — and God — for help in achieving their policy goals. Trump took a dramatically different tack at the Republican National Convention in 2016, declaring of America’s problems, “I alone can fix it.”

That proved an empty boast, at least for the coronavirus crisis. Trump has variously blamed former President Obama, China, the World Health Organization, Democrats, governors and the media.

In recent weeks, he has increasingly sought to move on, dismissing alarming new statistics and models, refusing House requests for testimony from Fauci and others, and praising armed protesters who gathered at the Michigan state Capitol in Lansing to demand easing of lockdown restrictions.

His administration blocked release this week of detailed guidelines from the federal Centers for Disease Control and Prevention on safety precautions businesses and public facilities should take as they open their doors, further worrying public health officials about the administration’s efforts to silence scientists and experts.

But the coronavirus has proven stronger and nimbler than the president’s rhetoric.

On Friday, Trump acknowledged that a second White House staffer had tested positive. The first was a member of the military assigned as one of Trump’s personal valets.

The second was Katie Miller, press secretary for Vice President Mike Pence and wife of Stephen Miller, one of Trump’s closest advisors.

The disclosure renewed questions about the refusal by Trump, Pence and many of their aides to wear face masks while in public. It also highlighted the threat to other Americans, whom Trump has repeatedly urged to return to work despite far less access to testing and medical care than those at the White House.

Already, coronavirus infections and COVID-19 deaths are moving from large liberal population centers in New York and California to conservative and battleground states, including Arizona, where Trump delivered a campaign-like speech at a mask factory on Tuesday.

Trump has vacillated between claiming he saved millions of lives by cutting off travel from China in January, to suggesting he would reopen the country by Easter, and more recently to urging states to reopen even if they don’t meet the broad guidelines that he announced at the White House on April 17.

Although the politics of the pandemic remain as much a mystery as the virus, Trump argues that it’s no time to change the country’s leadership during the crisis. On Friday, he repeated a campaign attack line, all but accusing Joe Biden, the likely Democratic nominee, of being in league with China.

“If the wrong person sits in this seat,” Trump told a group of Republican lawmakers at the White House, China would overtake America’s economy in “a few years or less.”

Democrats are betting that Trump, who claimed credit for stock market gains and a 50-year low in unemployment, won’t be able to obfuscate his way out of an economic and health catastrophe.

“That kind of behavior prior to the pandemic would be written off by a lot of people as Trump being Trump,” said Nick Gourevitch, a pollster who works with Priorities USA, the largest Democratic super PAC. “When they see it now in the middle of a crisis, they have a negative reaction to it.”

Another super PAC, the pro-Biden Unite the Country, launched a digital ad Friday highlighting Biden’s working-class roots and his role in rebuilding the economy after the deep recession that began in 2007 after a collapse in housing prices.

“Trump loves to crow about the great economy he built,” Biden said in a speech Friday from his home in Wilmington, Del. “When the crisis hit, it became clear who the economy was built to serve. Not the workers, not the middle class, not families.”

Trump’s team is convinced he can dodge blame at the ballot box for the current economic turmoil, and persuade voters he is best equipped to lead a rebound.

“He’s done it once and he can do it again,” Kayleigh McEnany, the new White House press secretary, told reporters Friday.

Internal Trump campaign polling shows that Trump is losing ground in swing states, according to a person involved in the reelection campaign who requested anonymity to discuss strategy and data.

But the internal polling also shows voters are willing to cut Trump some slack as a result of the pandemic and say his greatest advantage over Biden is on the question of who is better at bringing back jobs.

“He’s taking a hit for his overall response,” the person said. “But on the economy, voters seem to get it. We were just hit by a meteor in March.”

If Trump wins in November, he perhaps can take solace from the position Atty. Gen. William Barr expressed Thursday when he was asked on CBS News how history would view his decision to drop criminal charges against Michael Flynn, Trump’s first national security advisor, even though Flynn had pleaded guilty.

“Well, history is written by the winners, so it largely depends on who’s writing the history,” Barr said.