At Mt. Rushmore, president accuses his opponents of wanting to ‘end America.’ 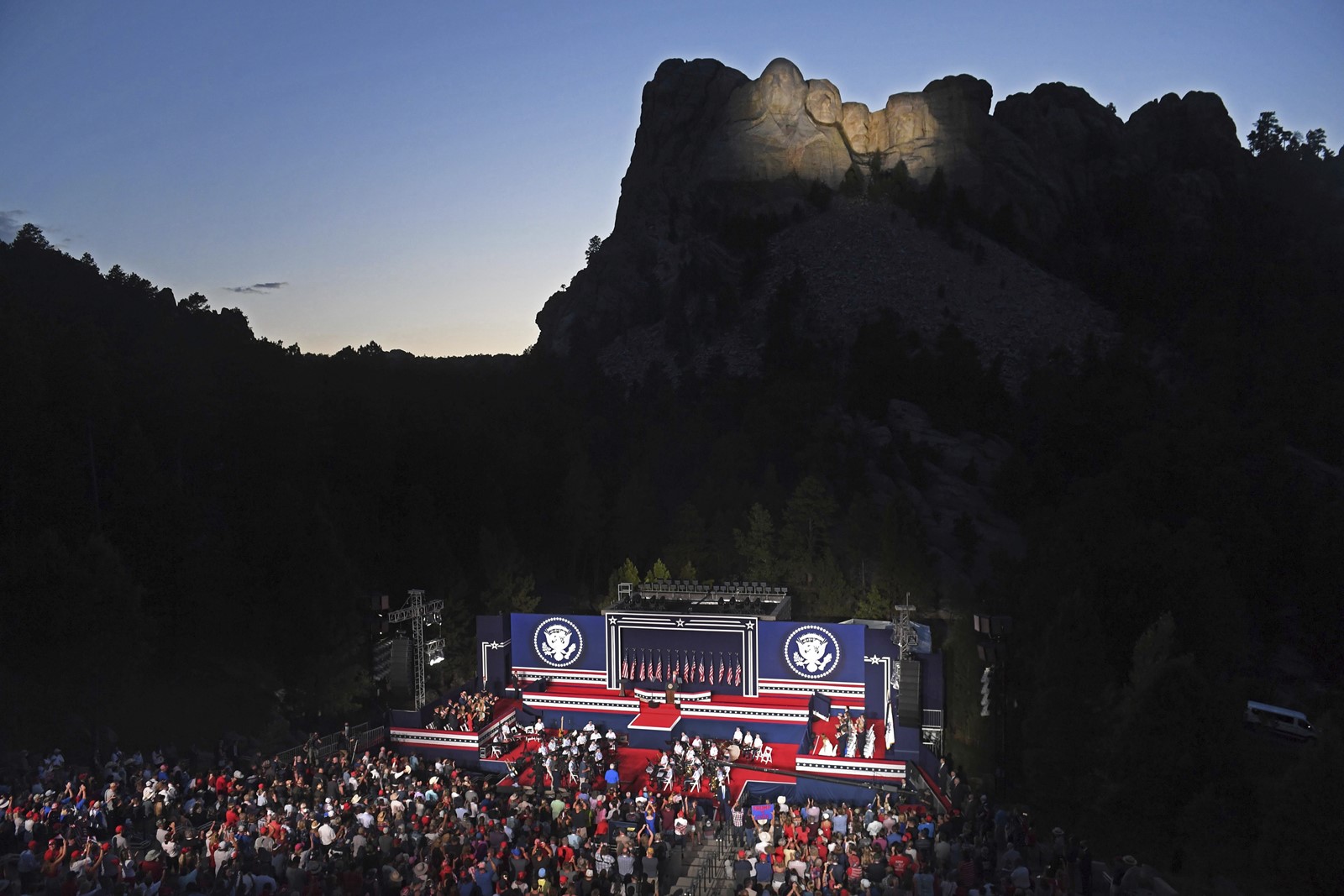 President Trump used an elaborate fireworks display and an Air Force One flyover at Mt. Rushmore on Friday night to rally his base, ushering in Fourth of July celebrations a day early with accusations that a “new far-left fascism” is part of “a merciless campaign to wipe out our history.”

The combative address in South Dakota came as Trump trails badly behind Joe Biden in public opinion polls amid a rapidly spreading pandemic, high unemployment and a national reexamination of the role of racism in American history, policing and culture.

Trump has indicated repeatedly — sometimes employing racist rhetoric or dog whistles — that he believes his best hope at victory lies in rallying his largely white voting base around the idea that demands for change amount to an attack on American values and culture. In Friday’s speech, he aimed exclusively at those voters, making few concessions to the usual July Fourth traditions of national unity.

The goal of the opposition, he said, “is not a better America. Their goal is to end America.”

“They,” he said, without ever specifying who he meant were infiltrating American institutions, including schools, indoctrinating children to hate their country. Although he made a point of lauding the Rev. Martin Luther King Jr. and other Black figures, he focused on the nation’s founders, calling the American Revolution “the culmination of thousands of years of Western civilization,” emphasizing the country’s links to European culture.

Trump promised to defend historical monuments and statues, but avoided any mention of the statues that have been the focus of the most debate — those of Confederate leaders, which he has called for preserving, even as cities and states take steps to remove them.

Whether Trump’s denunciations of “cancel culture” and his vows to protect American statues and monuments will connect with a wider group of voters is questionable. He largely avoided talking about topics that voters say are at the top of their concerns, such as the rapidly spreading coronavirus.

But as Trump spoke, his campaign confirmed that Kimberly Guilfoyle, a top campaign surrogate and Donald Trump Jr.’s girlfriend, had tested positive for the virus. The campaign said Donald Jr. had tested negative. Neither of them were in attendance after canceling public events.

Trump’s speech was consistent with his response to Black Lives Matter protests around the country. He has emphasized a “law and order” message that casts demonstrators as violent and lawless.

The speech at Mt. Rushmore was heavy on all of those themes, promising to crack down on protesters and echoing many of his campaign addresses with an affirmation of gun rights, a call against abortions and appeals to God and the flag.

Trump’s focus on the culture wars has baffled even some strategists in his own party. Not only are the pandemic and its economic effects upending American life, but polls also show that an increasing number of Americans of all races are eager to confront racism, a reality reflected in the number of large corporations that have embraced at least some of the Black Lives Matter message.

A notable example came Friday just a few miles from the White House as the Washington Redskins announced that after decades of criticism, the team would review its name after new pressure from FedEx, which holds the naming rights to its stadium, and Nike, which stopped selling team apparel on Thursday.

Trump has voiced his opposition to a name change for years and has been eager in recent weeks to fight those he calls “politically correct,” a motivating force in his 2016 victory. He has spoken repeatedly against removing Confederate monuments and threatened Tuesday to veto a $740-billion defense bill if it included a provision to remove the names of Confederate leaders from 10 military bases.

The location of Trump’s speech added to his defiant message. Federal officials stopped holding Fourth of July fireworks at Mt. Rushmore 11 years ago out of concern for the fragile environment and the risk of wildfires in the Black Hills.

In addition to those environmental concerns, public health officials in his own administration have cautioned against mass gatherings like this one, which came roughly two weeks after Trump held a rally in Tulsa, Okla., that raised similar concerns, despite attendance numbers that failed to live up to his campaign’s expectations. The announced crowd of 7,500 at Mt. Rushmore came from around the country, Republican Gov. Kristi Noem said as she introduced Trump.

Trump seemed most eager to confront the budding movement on the left to reconsider the Mt. Rushmore monument itself, which memorializes presidents Washington, Jefferson, Theodore Roosevelt and Lincoln. Historians have pointed not only to Washington’s and Jefferson’s status as slaveholders, but also to the racist and anti-Semitic past of the monument’s creator, Gutzon Borglum. Several tribal leaders and members also protested Trump’s visit to the monument, which sits on land that they view as sacred and stolen.

Even among critics of the monument and its creator, there’s little support for the idea of removing the iconic sculpture. But the attention from some scholars and activists gave Trump an opening to cast his opponents as enemies of the country’s most respected presidents.