As president trails in polls and COVID-19 rages, striking right message is difficult. 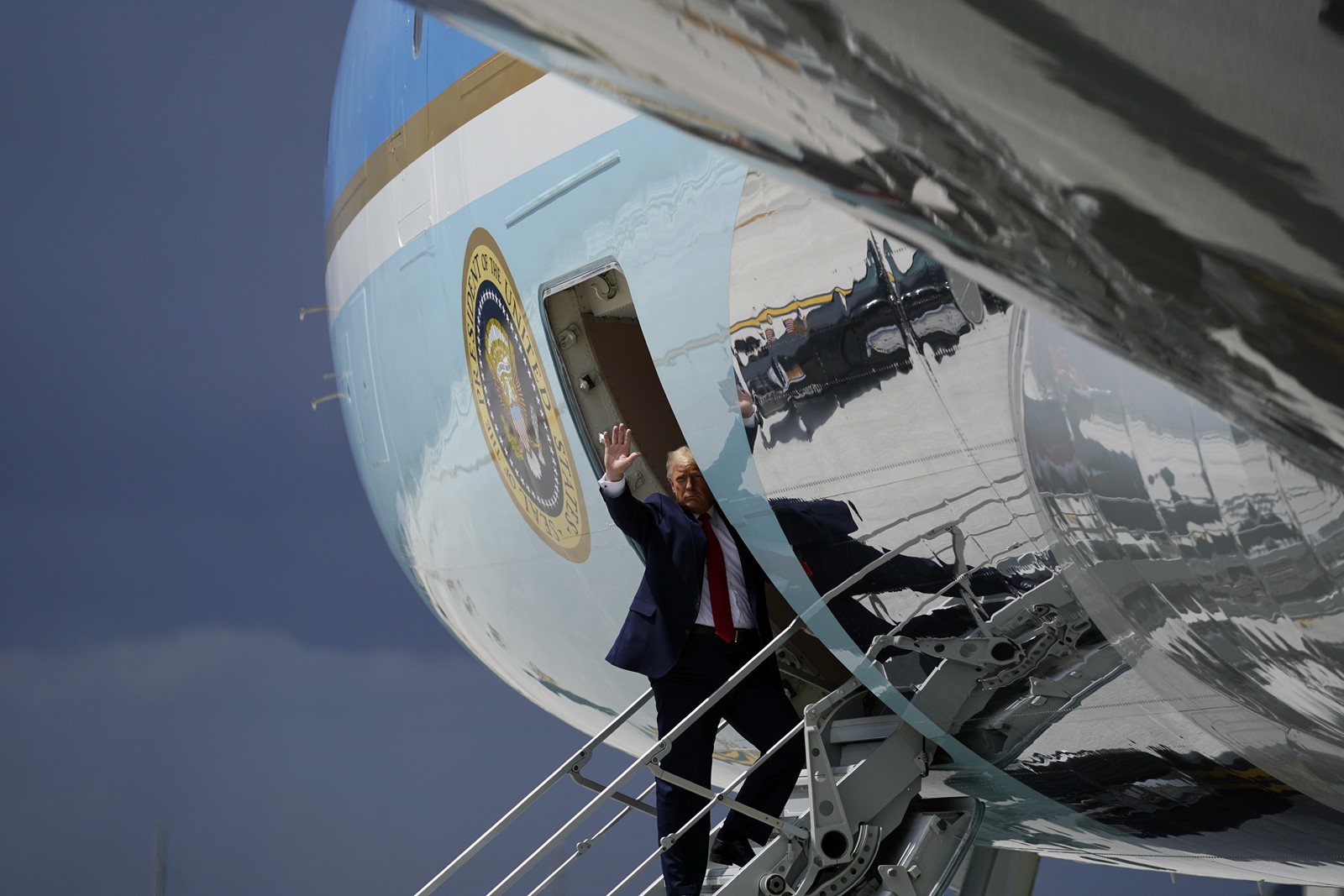 For weeks, President Trump’s campaign aides have fretted about whether he could draw a major crowd to an airport rally Saturday night in Portsmouth, N.H., or if not, whether they could stage the event to make it look full.

The danger, all agreed, was a repeat of Trump’s disastrous last rally, three weeks ago in Tulsa, Okla., where TV cameras showed two-thirds of the indoor arena as a sea of empty blue seats, and the vast throngs predicted outside failed to materialize.

Worse, health officials later said the president’s Tulsa rally “likely contributed” to a sharp spike in coronavirus infections in the state, one of three dozen now battling a record increase in COVID-19 cases.

On Friday, the White House abruptly pulled the plug on the planned New Hampshire rally, citing weather worries even though the forecast showed morning thunderstorms mostly clearing by the evening. Aides said it would be rescheduled.

The decision reflects the growing nervousness in Trump’s campaign, which is desperate to avoid another embarrassment as his prospects for a second term dim.

The struggle to stage the giant raucous rallies that propelled Trump’s 2016 run makes clear just how how difficult his second campaign has become.

Even before the rally was scrubbed, there was little of the hype that preceded Tulsa, far less talk about a triumphant return to the campaign trail or an aggressive relaunch of a reelection bid that ran aground once the economy tanked this spring as COVID-19 spread from state to state and Trump’s response was widely seen as lacking.

“People recognize there’s been a rough patch and it’s been a challenging month or so,” said one former administration official with ties to the campaign.

“That rally in Tulsa did not go well by any stretch, by any measure.”

While rumors still swirl about a looming staff shake-up, those involved in the reelection effort are increasingly resigned to getting behind their often self-destructive candidate, according to interviews with numerous people involved in the campaign who spoke on condition of anonymity.

They are pinning their hopes on the possibility that Trump or the broader political and economic environment will somehow change in the next four months and that the magic of 2016, when Trump eked out a narrow win at the wire, will repeat itself in his face-off against Joe Biden.

“We were in dire straits in early October and mid-October” in 2016, and then Trump “ran the script beautifully” in the final weeks, another campaign official said.

Claiming that a reopening of schools and businesses will boost confidence in Trump’s leadership, the official added, “Everybody is concerned but way more optimistic than they were a month ago. If you can win each day, that’s kind of what we need to get back to.”

That may be a tall order for Trump, who has bitterly complained that he is a victim of the coronavirus crisis, portraying the worsening contagion more as a threat to his campaign than to the country.

A record 63,000 new U.S. cases were reported Thursday, pushing the total above 3.1 million. Researchers recently upped their projections of the likely U.S. death toll from 160,000 to more than 200,000 by election day, the worst by far of any country in the world.

“He bungled the virus response, and he doesn’t want to deal with it anymore,” said Ed Rollins, a veteran of several GOP presidential campaigns. “He needs someone on his campaign who is really in charge and can dictate the strategy and message to the candidate.”

In 2016, Trump shook up his campaign twice. After he emerged as the likely GOP nominee, Trump brought on veteran GOP consultant Paul Manafort to stabilize his bare-bones operation through a potential delegate fight and the Republican National Convention.

He later replaced Manafort with Stephen K. Bannon and Kellyanne Conway to sharpen his message over the final months. (Manafort was later convicted of multiple tax and bank fraud charges; he was recently moved to home confinement due to the COVID-19 threat in prison.)

Neither Bannon nor Conway is officially involved in the reelection campaign, which is steered primarily by Trump’s son-in-law, Jared Kushner, who continues to serve as a senior White House advisor.

Bannon, a staunch nationalist whom Trump fired six months after he took office, has been slowly working his way back as an informal advisor and has been in touch with the president in recent weeks about strategy. But a formal campaign role is unlikely, aides said.

“He can influence the president’s thinking without being part of the campaign,” one official explained, noting that Trump is loath to allow Bannon to be viewed as a leading intellectual force in the campaign, as he was four years ago. “The Svengali stuff doesn’t play well with Trump, so that hurt him.”

Brad Parscale, whom Kushner had picked as campaign manager in 2018, has “been sort of pushed aside” and has resumed his narrower 2016 role, running the data operation while Kushner oversees strategy, one campaign official said.

Trump’s campaign maintained that Parscale remains in charge. “President Trump has built a formidable campaign, and additions to the team have only fortified Brad Parscale’s leadership,” said Tim Murtaugh, the campaign’s communications director.

“As we enter the home stretch, we look forward to defining Joe Biden by his half-century of failure in Washington, his dismal record on the economy, and plans to raise taxes and enforce crippling regulations on job creators,” he said.

Trump’s adult children and Kushner were behind every campaign shakeup in 2016. Changing the lineup may be harder this time.

“Who within this family is going to say, ‘Fire Jared’?” one former Trump staffer asked. “It’s just not likely he’s going anywhere.”

Multiple advisors expressed frustration that Trump continues to undercut his own progress, grumbling about how the president’s tweet last weekend demanding that Black NASCAR driver Bubba Wallace “apologize” for his response after a noose was found in his garage blunted any positive momentum generated by Trump’s speech July 3 at Mt. Rushmore, where he positioned himself as a defender of history — Confederate monuments and all — against a “radical” movement dedicated to a “cancel culture.”

Even though Trump’s responses to the coronavirus outbreak and to the mass protests after the death of George Floyd in police custody in Minneapolis cost him support, the president and some advisors believe his staunch defense of “law and order” and blunt demands that schools reopen despite the coronavirus will win back some suburban voters.

But polling data suggest the suburbs are moving in the opposite direction. Two-thirds of Americans believe the country is “on the wrong track,” according to a Reuters/Ipsos poll this week that charted Trump’s overall approval rating at just 37%.

“They’re losing voters over the age of 65 who are worried about the virus and not seeing any empathy from this president,” said Rollins. “And if you become anti-Black, that turns off the suburban women.”

Rollins, who also serves as chairman of the largest super PAC backing Trump, bluntly criticized the president’s campaign as inexperienced, overconfident and slow to adapt to a fast-changing election landscape.

“You never let a campaign be determined by destiny, and you never rerun a presidential campaign a second time. Every one is different,” Rollins said, describing Trump’s team as “a bunch of people who’ve never been in a campaign, who don’t know what to do.”

Instead of the binary choice voters faced in 2016 between two candidates with high perceived negatives, the 2020 election is shaping up as a referendum on the president himself.

Trump, despite his best efforts to maintain an outsider’s posture, is now the incumbent, being judged — and harshly so — on his polarizing, impatient response to a historic public health crisis and a sudden, deep recession, as well as his increasingly blunt nativism in response to a national reckoning with systemic racism.

Despite the Trump campaign efforts to paint Biden as too old or too liberal for most Americans, he does not seem to inspire the same level of antipathy or fear in some voters as Hillary Clinton did.

He garners more than 50% support in national polls, a benchmark Clinton never reached.

Trump needs to tell voters “what’s wrong with Joe Biden,” said Ari Fleischer, who was White House press secretary under President George W. Bush. “If this election is about the incumbent, chances are Donald Trump will lose.”