Nancy Beck draws bipartisan opposition from lawmakers over her background in the chemical industry. 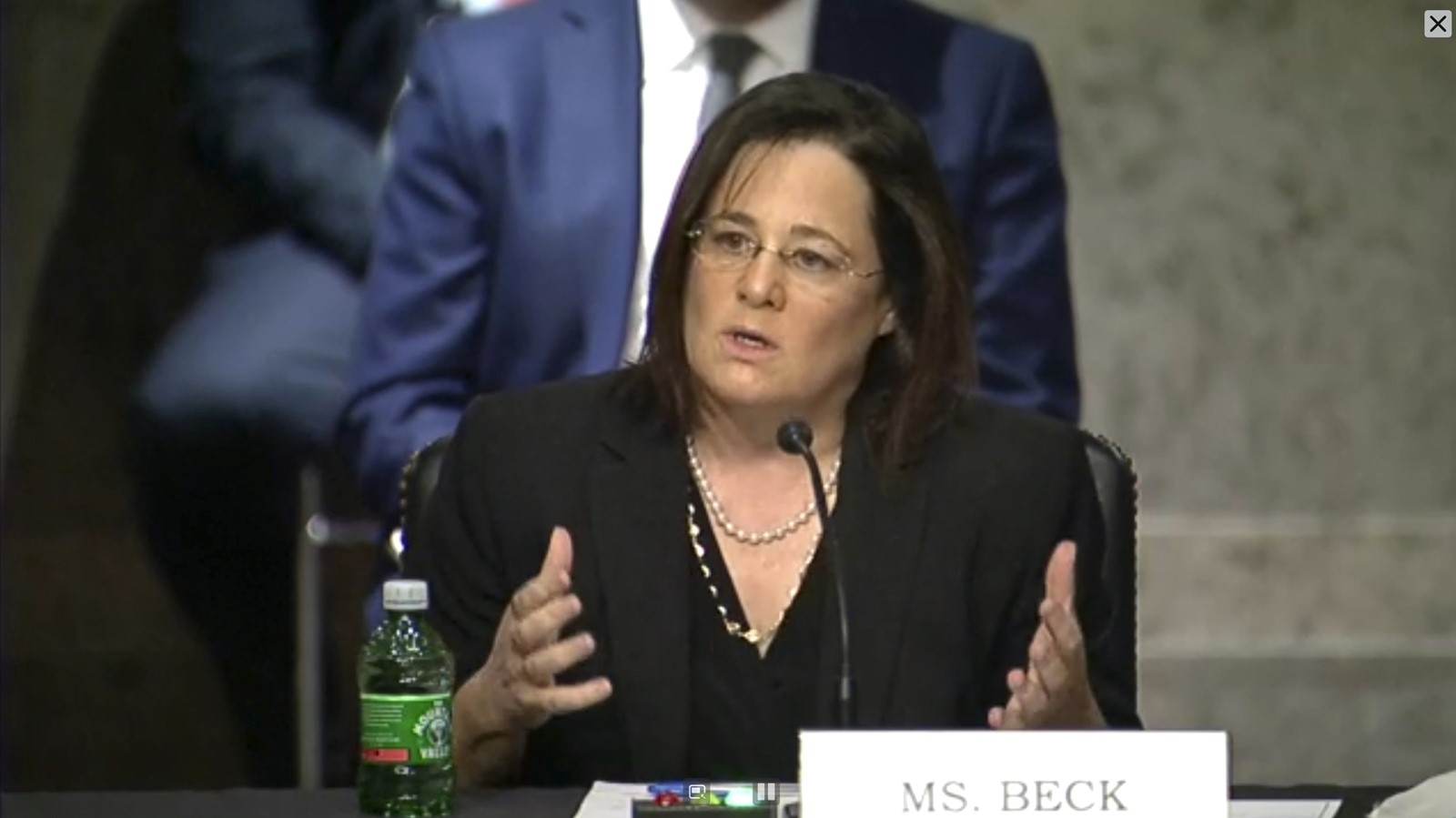 A Trump administration toxicologist who relaxed rules on dangerous chemicals linked to serious human health problems has generated bipartisan opposition to her nomination to lead the nation’s consumer safety agency.

Democrats and consumer groups for months have been fighting to block Nancy Beck’s nomination to chair the Consumer Product Safety Commission, saying she was too cozy with the chemical industry. The commission oversees the safety of 15,000 consumer products, including strollers and toaster ovens.

Sen. Shelley Moore Capito (R-W.Va.) said she would not support Beck because the Trump administration official had helped weaken regulations of a class of chemicals called perfluoroalkyl and polyfluoroalkyl substances — or PFAS. The substances have been linked to cancer, birth defects and immune system disorders. Yet they are still used in a host of products, such as firefighting foam, nonstick pans and furniture.

Known as “forever chemicals” because they don’t break down, PFAS have also contaminated drinking water across the country, as well as the groundwater near military bases and manufacturing plants.

As a top deputy in the Environmental Protection Agency’s chemical safety unit, Beck sought to weaken regulation of potentially toxic chemicals, including PFAS. Records obtained by congressional Democrats show that after she took a job at the White House last year, she continued to pressure the agency to include a regulatory loophole that would allow imports of products with PFAS to continue.

Beck “is not the right person to lead the Consumer Product Safety Commission,” said Capito, whose state is home to an infamous example of PFAS poisoning that inspired the 2019 film “Dark Waters.” “The CPSC chairman should be someone who applies the proper balance between protecting public health and the environment and the needs of our economy.”

Capito’s decision, announced June 17 after Beck’s nomination hearing before the Senate Commerce Committee, poses a serious problem for the Trump administration. The senator serves on the commerce panel, which means the nomination could be deadlocked at a 13-13 vote in committee if all Democrats oppose it, as expected. Though such a tie could still result in Beck’s name being sent to the entire chamber for consideration, it’s unclear whether the White House can muster enough votes to guarantee that outcome.

Representatives of two Republicans on the committee who are up for reelection — Cory Gardner of Colorado and Daniel Sullivan of Alaska — did not respond to emails seeking comment. Sen. Susan Collins (R-Maine), who is facing a difficult reelection race, said she would vote against Beck’s nomination if it reaches the Senate floor. Republicans control 53 of the Senate’s 100 seats.

Beck, 54, has been praised by the White House and industry groups. In announcing her nomination in March, the White House noted she had been a career employee in the Office of Management and Budget under Republican and Democratic presidents, and she had been a public health official for Washington state. She has a doctorate in environmental health from the University of Washington.

“Nancy Beck is a respected career government official and scientist who has served this country honorably in both Republican and Democrat administrations. The United States has some of the strictest health and safety standards in the world, an effort that Nancy will continue in her role at CPSC,” an administration official said. The White House, as is typical in pending nominations, declined an interview request on Beck’s behalf.

“She has worked across government in four administrations,” said Graham Owens, director of regulatory policy at the National Assn. of Manufacturers. “She is diligent and thoughtful. She is evidence-based and looks at data first.”

Beck has been tapped to replace Republican commissioner Ann Marie Buerkle, who served as acting chair before stepping down last year. Buerkle had been appointed by President Trump to be the commission’s permanent chair, but her nomination did not advance in the Senate.

If former Vice President Joe Biden, the presumptive Democratic nominee for president, wins the election, he could name one of the two Democrats on the commission to become its chair with approval of the Senate, but Beck would retain her seat on the commission.

The Consumer Product Safety Commission, which has about 550 employees and a $127-million annual budget, plays a key role in reducing the risk of death and injury from consumer products. It oversees the development of safety standards, product recalls and data collection on potential dangers posed by items as varied as appliances and toys.

Democrats and consumer advocates say that Beck would tilt the commission too far in favor of business and that her prior work indicates she would thwart the regulatory process.

They have said that Beck’s background in the chemical industry raises serious questions about whether she could fairly regulate it. She served for five years as the senior director of regulatory and science policy at the American Chemical Council, the main trade group representing chemical companies.

Consumer advocates say they are particularly concerned that Beck might stymie efforts to ban the use of flame-retardant chemicals, which have been linked to health disorders, in consumer goods.

Rachel Weintraub, the legislative director and general counsel at the Consumer Federation of America, said Beck dodged too many questions at her confirmation hearing to be trusted with the job.

Beck repeatedly told senators that she was not a “decision maker” on toxic chemicals and merely facilitated discussion in the Trump administration about how to address them. She generally avoided discussing the role she played in writing and rewriting regulations.

“There is extensive documentation that shows she was not merely a facilitator,” Weintraub said. “If it is true she was not a decision maker, that should not qualify someone to lead an independent agency.”

Washington Sen. Maria Cantwell, the ranking Democrat on the Commerce Committee, said at the hearing that Beck “repeatedly sided with an industry to represent the American Chemistry Council over the safety of American families.”

Former EPA officials said they were alarmed from the day Beck joined the agency in 2017. As an executive at the chemical trade group, she had fought the Obama administration’s efforts to regulate the industry. Though the administration generally bars officials from working on the same matters they had handled for their former employers for at least two years, Beck was hired under a special provision, usually reserved for technical experts, that freed her from having to recuse herself.

While at the EPA, Beck aggressively sought to rewrite rules drafted by the Obama administration, making changes that aligned with the chemical industry’s requests.

“She knew exactly what she was going to do as soon as she got there,” said Betsy Southerland, who oversaw the EPA’s Office of Science and Technology until her retirement in 2017.

The rules’ new language narrowed the scope of risk evaluations. As a result, when the EPA began assessing the first 10 chemicals, agency staff were limited. When deciding whether to ban a chemical or restrict its use, the EPA could only analyze risks posed by direct contact with the chemical, not what would happen if it contaminated the air or water.

Legal challenges to Beck’s work at the EPA are still making their way through the courts. In late 2019, the U.S. Court of Appeals for the 9th Circuit handed environmentalists a victory, ruling that the agency’s chemical safety regulations failed to consider outdated uses of a chemical, such as the existence of asbestos in buildings.

It was a blow to the agency, which would have to redo its risk evaluations. But Beck had already moved on, her efforts having secured years of delayed regulations for the chemical industry.