Experts worry Trump will cede too much to N. Korea 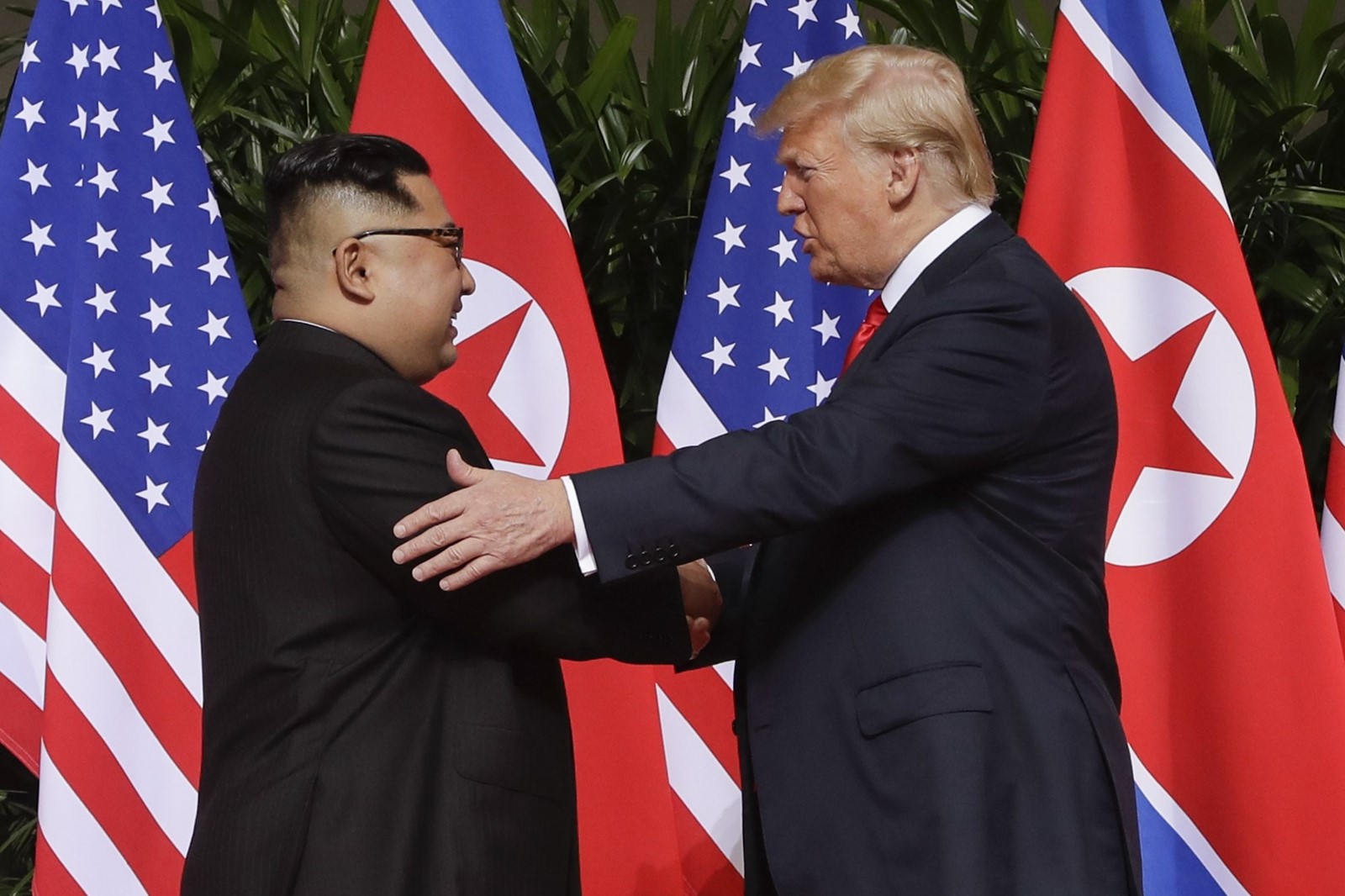 PRESIDENT TRUMP and North Korean leader Kim Jong Un at their summit in Singapore in June. They are scheduled to meet again on Feb. 27-28 in Vietnam. (Evan Vucci Associated Press)
PREVIOUS IMAGE

Negotiators for President Trump and North Korean leader Kim Jong Un are discussing a possible deal for their upcoming summit that would include a declaration ending the Korean war in return for verifiable steps to halt Pyongyang’s nuclear program, according to current and former U.S. officials.

But those and other contentious issues remain unresolved two weeks before Trump and Kim are scheduled to meet on Feb. 27-28 in Hanoi, Vietnam, the officials said.

Among the crucial sticking points: whether the United States would ease international sanctions before or after North Korea takes confirmed steps to curb its development and production of nuclear weapons.

The two leaders committed to denuclearization of the Korean peninsula when they first met last June 12 in Singapore, but they did not set up any step-by-step disarmament schedule for how to achieve that goal.

The uncertainty is raising concerns both in and out of the administration that Trump, in his second attempt to reach a historic diplomatic breakthrough with Kim, will agree to a headline-grabbing peace declaration and offer other U.S. concessions without locking in significant commitments from Pyongyang.

“We’re not there yet,” said a senior U.S. official familiar with the working-level talks aimed at hammering out as much of an agreement as possible before the Trump-Kim summit. “The denuclearization piece is obviously the hard part.”

Trump could view a nonbinding peace declaration for the 1950-53 Korean War as a signature diplomatic achievement, one he might grasp at even if it did not include ironclad requirements by North Korea to scale back its weapons programs.

“What I fear is that President Trump might be using a peace declaration as a way to bake in success for the Vietnam summit with a dramatic announcement for the end of a 70-year war,” said Jung Pak, who served as deputy national intelligence officer at the CIA until early in Trump’s term.

Joel Wit, a former U.S. diplomat who helped reach and implement a 1994 agreement with North Korea, believes a declaration is “close to a done deal,” calling it a first step in a “fairly long road toward” closer economic and diplomatic ties and other confidence-building steps that could end the nuclear threat.

The peace declaration under discussion would be a political statement rather than a legally binding peace treaty. A treaty would require approval by all the signatories to the armistice that ended the three-year conflict and might need to be ratified by Congress and the U.N. Security Council.

Analysts say Kim is likely to demand more from Trump than a peace declaration and will pressure him to ease sanctions unilaterally or scale back the 28,500 U.S. troops in South Korea.

“One of the biggest fears of Korea watchers is that Trump will give away a big-ticket item like troop reduction,” said Suzanne DiMaggio, a North Korea expert at the Carnegie Endowment for International Peace, a nonpartisan think tank.

“It’s one of the biggest things we can put on the table and so far we’ve seen nothing from North Korea that they’re willing to put anything on the table,” she said.

Trump’s craving for a deal that would out-do his predecessors was unmistakable Friday at a Rose Garden news conference. He mused about winning the Nobel Peace Prize, claiming that Japanese Prime Minister Shinzo Abe had composed a “beautiful” five-page letter nominating him for the award.

President Obama won the 2009 Nobel Peace Prize for promoting nuclear nonproliferation and his “extraordinary efforts to strengthen international diplomacy and cooperation between people.”

“They gave it to Obama. He didn’t even know what he got it for,” Trump said. “With me, I probably will never get it.”

There is little indication Kim is prepared to agree to such a massive undertaking — or that Trump officials are even seeking such a far-reaching deal at the Hanoi summit. Trump last year pulled out of 2015 Iran nuclear accord that included many of those provisions, saying it was inadequate.

North Korea has halted all nuclear and missile tests since the Singapore summit, and the United States has suspended joint military training exercises with South Korean forces, in what has been dubbed a freeze for a freeze.

The Pentagon says it is still conducting small-scale joint exercises with South Korea and is prepared to help defend the country if necessary.

While tensions have eased, North Korea has not relaxed its nuclear posture and has taken no major steps to scale back or dismantle its nuclear infrastructure or program, according to U.S. intelligence and the International Atomic Energy Agency, the United Nations nuclear watchdog.

Trump has boasted frequently about his deal-making prowess and his close relationship with Kim, implying that his skeptical intelligence advisors did not appreciate the progress he had made in changing the adversarial U.S.-North Korea relationship.

“Perhaps Intelligence should go back to school!” Trump tweeted last month after top U.S. intelligence officials told Congress that the leadership in Pyongyang was unlikely to give up its nuclear weapons, viewing them as central to its survival.

The meager results from the Singapore summit appear to have prompted administration officials to opt for a more gradual process this time, involving reciprocal steps carried out over many years.

Kim has committed in talks with U.S. officials “to the dismantlement and destruction of North Korea’s plutonium and uranium enrichment facilities,” Steve Biegun, the administration’s special envoy to North Korea, said in a speech last month at Stanford University.

But Kim had qualified that commitment “upon the United States taking corresponding measures,” Biegun noted, adding that the U.S. side was “prepared to discuss many actions that could help build trust between our two countries.”

Secretary of State Michael R. Pompeo told Fox News on Thursday that “we’ve had a lot of talks” with North Korean officials about a peace declaration. He said he expected Trump and Kim would talk about “denuclearization” and “peace mechanisms on the Korean peninsula” at the Hanoi summit.

Analysts said Kim might agree to decommission or dismantle the Yongbyon Nuclear Scientific Research Center, its main uranium enrichment facility. But that would leave dozens of other secret sites where North Korea carries out nuclear and missile development.

Kim has shown no sign that he would allow international nuclear inspectors into North Korea to examine its nuclear sites or to verify elimination of the country’s nuclear and missile facilities. The government expelled U.N. inspectors in 2009 after a previous disarmament push had collapsed.

North Korean officials appear to be holding back until Kim faces off with Trump, believing they can get the best deal out of a president with a history of rejecting advice from advisors and making decisions based on his gut, people familiar with the talks say.

Victor Cha, who led talks with North Korea under President George W. Bush, said Kim and his team were relying on the sense that Trump makes decisions “in the moment.”

“If the North Korean leader can catch Trump at the right time and get him to commit to something … that’s what they’re looking for,” he said in a podcast at the Center for Strategic and International Studies, where he chairs the Korea program.

Some Korea experts praised Trump’s unconventional approach, saying it has lowered tensions in the Korean peninsula and raised hopes of a deal.

“The point is it’s the best shot we’ve had in a long time, and I think top down is the way to go,” Wit said. “With a different U.S. president we’d probably be saying, ‘Not a bad idea.’”

U.S. officials have long viewed an agreement to formally end the Korean War as a tool to reassure Pyongyang that it faces no threat from the United States and could therefore relinquish its nuclear program.

But Abraham Denmark, a former Pentagon official responsible for Asia under Obama, said North Korean officials considered such assurances unreliable, noting that Libyan leader Moammar Kadafi voluntarily gave up his nascent nuclear program in 2003 only to be ousted in a U.S.-backed intervention in 2011.

Instead, the North Koreans are likely to push for sanctions relief, hoping they can persuade Trump to ease their economic isolation without agreeing to irreversible steps to give up their nuclear weapons, Denmark said.