Quiet life, with flashes of rage

‘Pretty much in shock,’ sister says 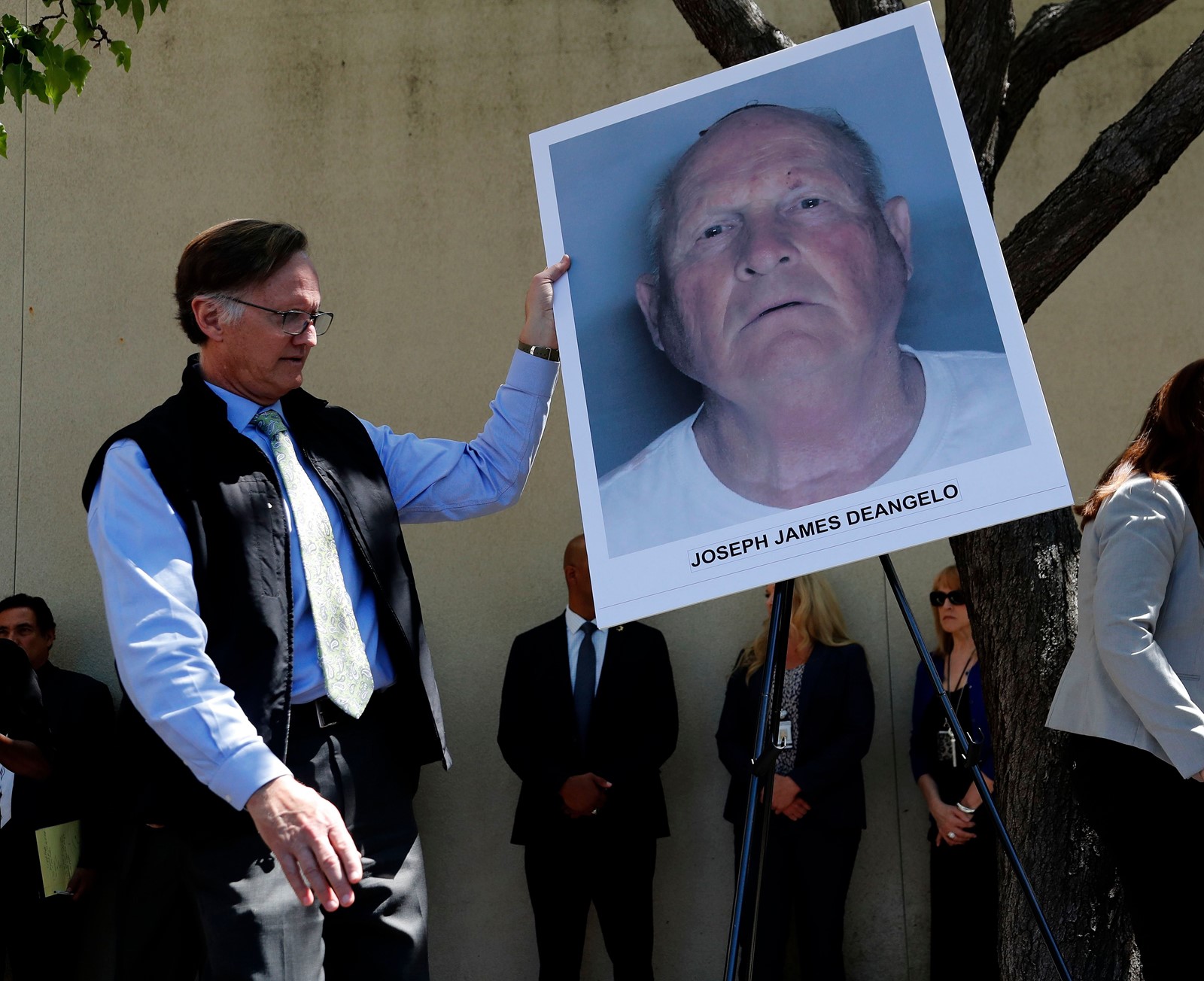 When the law came for him after 40 years of hunting, he was doing a woodworking project in his garage.

As the team of armed local and federal agents took him into custody, the 72-year-old truck mechanic asked them if he could take out a roast he had cooking inside.

The arrest Tuesday underscored the utter dichotomy between the day-to-day suburban life of Joseph James DeAngelo Jr. and the gruesome crimes he is accused of committing.

Authorities say he is the Original Night Stalker and the Golden State Killer, monikers given to a man who raped at least 46 women and killed a young couple in the Sacramento area before heading to Southern California, where he crept into homes at night and brutally murdered 10 people.

In Citrus Heights, he was a grumpy man who cursed when he misplaced his car keys. He owned an aluminum fishing boat and dirt bike, and kept his lawn meticulously trim, crawling around several boulders to edge the grass by hand.

Little about his life story suggests alienation, or the sadism inherent in the charges he faces.

Before retiring last year, he worked for 27 years at the Save Mart Supermarkets distribution center in Roseville, fixing its trucks. He and his wife — an attorney — raised three daughters, one who is now an emergency room physician, another a graduate student at UC Davis.

DeAngelo served in the Navy and did 22 months of combat operations off the North Vietnam coast during the war, according to local media reports at the time. He received his associate’s degree in police science from Sierra College in Rocklin and moved to Cal State Sacramento in 1970 to get his bachelor’s degree in criminal justice. He met his wife, Sharon M. Huddle, in school and married her in 1973.

That year he joined the police department in Exeter, outside Visalia, where his sister Becky lived. According to an article in the Exeter Sun at the time, “James DeAngelo Jr. believes that without law and order there can be no government and without a democratic government here can be no freedom Law enforcement is his career, he says, and his job is serving the community.”

For the three years he was in Exeter, Tulare County police were befuddled by some 100 break-in burglaries in Visalia by a man who donned a mask and tore up the homes’ interiors. The incidents stopped in 1975. By 1976 DeAngelo had moved back north, to be hired by the police department in Auburn.

Then the rapes began. An intruder slipped into homes in the foothills east of Sacramento, first looking for single women, then couples. With a handgun pointed at the victims, he had the women bind the men with shoelace or cord, then he would bind the women himself.

He often made the men lie with cups or stacks of plates on their backs, and promised that if he heard the dishes fall, he would kill them. Then he might spend hours looking for jewelry and rare coins, eating and drinking beer, repeatedly raping the women, before disappearing into the night.

“It was a lot more than a hunch,” said Wendell Phillips, a former Sacramento sheriff’s deputy who was part of a team searching for the East Area Rapist. “There was no doubt he was either military or law enforcement or both.”

Phillips said the perpetrator knew police tactics and how to elude capture. He picked houses that backed up to a culvert or greenbelt, and always left a back window open. And the way he tied the knots on his victims suggested he had been in the Boy Scouts or Navy.

The Sacramento County Sheriff’s Department had a “good-sized unit hunting him every night,” Phillips said.

But if it closed in on him, he would go into “the biggest, thickest, nastiest bush he could find,” then cover himself with leaves. “The search would go right over the top of him,” Phillips said.

Phillips said they were so sure that the rapist was a cop that any officers who wanted to join the team hunting him had to submit saliva samples to ensure they didn’t share a rare genetic trait they found in the suspect’s bodily fluids.

The first killings DeAngelo is charged with occurred about 9 p.m. on Feb. 2, 1978. Brian and Kate Maggiore were walking their dog near their apartment in Rancho Cordova in Sacramento County. The details are not clear, but the couple encountered a man in a ski mask with a gun, ended up in a backyard and were shot to death. Whether the killer had set out to murder the Maggiores is not clear.

The rapes continued until July 1979, probably around the time DeAngelo was caught stealing a can of dog repellent and a hammer from a Pay ’N Save Store in Citrus Heights.

According to the Auburn Journal, he was convicted of a misdemeanor for the theft in August and dismissed from the force.

That October, authorities say, the killer went to the Goleta area near Santa Barbara and attacked a couple asleep in their home. The two escaped, and he fled on a stolen bicycle.

Two months later in Goleta, the killer entered the home of Dr. Robert Offerman, 44, and Alexandria Manning through a sliding glass door. He found the couple asleep in bed, tied them up and shot them to death.

On March 13, 1980, he broke into the Ventura home of Lyman Smith, 43, and his wife, Charlene Smith, 33. He tied them up using a drapery cord and secured it with a diamond knot — his signature knot. He raped her, then bludgeoned them to death with a fireplace log.

He next killed a couple in Dana Point in August 1981, followed by a woman in Irvine, then another couple in Goleta in July 1981.

DeAngelo moved to his home on Canyon Oak Drive in Citrus Heights in January 1983.

The serial killer’s last known victim, Janelle Cruz, 18, was raped and slain in her Irvine home on May 4, 1986.

It wasn’t until 2000 that detectives connected the unsolved murders and realized they were the work of a serial killer.

Authorities identified DeAngelo as a possible suspect through a genealogical website. Investigators then made a positive match to the killer by collecting his DNA from a discarded item, such as cup or straw.

“I’m pretty much in shock,” she said. “I’m in disbelief. It’s difficult to think about.” Thompson said she holds out a hope that police are wrong about her brother, whom she regarded as “the kindest, gentlest man with his children.”

DeAngelo appears to be separated from his wife. She practices family law and helped mount a national fight against the practice of surrogate motherhood. Huddle, then practicing as Sharon Huddle DeAngelo, co-founded the National Coalition Against Surrogacy as California considered a law governing the rights of women to be paid for carrying the fetuses of egg and or sperm donors.

“A lot of the neighbors know that about Joe — that he was a screamer and a curser,” she said.

She said DeAngelo was handy, setting his own concrete in the front yard, which she suspects now might be of interest to detectives looking for some of the mementos the killer is known to have stolen from victims.

“I think they’re probably going to look under those slabs,” she said.