From sports to playing James’ son, 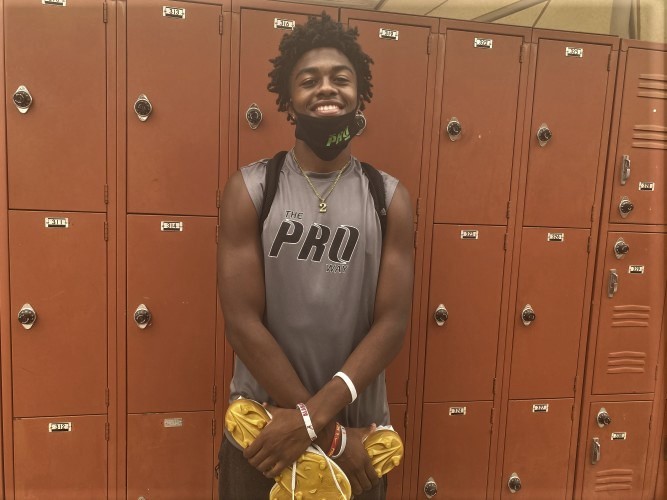 On the final Thursday of February 2020, before there was any talk of canceling the track and field season or implementing social distancing guidelines because of the coming COVID-19 pandemic, defensive back Ceyair Wright of Los Angeles Loyola High gave a hint of how fast he might be when he unleashed a burst of speed to run 100 meters in 10.92 seconds during a dual meet against West Hills Chaminade.

He left soon after to take a two-week trip to North Carolina to film a television pilot. A week later, his friend, defensive back Domani Jackson of Santa Ana Mater Dei, passed him for No. 1 in the state with a time of 10.78.

“Me and him were teasing each other who was going to be fastest at the end,” Wright said. “If we would have kept going, I would have dethroned him.”

Wright thought he could make a bid to break the Loyola school record of 10.51 seconds, but the world changed because of the pandemic.

Practices came to a halt. Schools closed. Seasons were canceled. Athletes were left to train on their own not knowing when competition would resume.

Track season finally has given way to football season, and the 6-foot, 175-pound Wright can’t wait to show the impact his speed will have playing cornerback and wide receiver during what looks to be a five-game season. Loyola will begin play March 19 against Upland.

“The faster you are, the more of a threat you are,” he said.

Wright benefited from having his father, Claudius, a former defensive back at Arizona, to help with training during the pandemic.

“He’s the one setting up drills and hills,” Wright said. “He’s trying to put me through what he did in his playing days.”

“We’re going to use him a lot,” Casani said. “Athletically he’s got the speed and the fluidity, but also he’s long. He has long arms and can jump. Most importantly is his confidence. He believes in himself.”

Wright is someone who thrives with multitasking.

In the summer of 2019, he played LeBron James’ son during the filming of “Space Jam 2,” which is supposed to be released this summer.

He was modeling at age 5 and worked in commercials at 9. He continues to challenge himself through acting, sports and school.

“I like that you get to take on a new persona every time you take a role,” Wright said of acting. “I like challenging myself. I like to tap into my emotions and see what I can do and display on the screen. I like being able to meet so many different people. I’ve met tons of amazing people in my career. It’s great.”

One person who made a memorable impression was James.

“He is a great person,” Wright said. “Before I met him and built a relationship, I would see people talking bad and didn’t pay attention. Now [that] I know the type of person he is, I take offense. I can’t fathom people talking bad about him. He’s extremely down to earth, caring and nice. I’m ready to defend him.”

Wright’s decision to use track to improve his speed has paid off.

After he ran his 10.92 time, nearly a dozen football scholarship offers arrived in the ensuing weeks. He was the most heavily recruited Loyola defensive back since David Long, a current Rams player who ended up choosing Michigan in 2016. Wright’s teammate at the other corner, Zakhari Spears, signed with Washington.

“I’ve grown up taught to put my effort into a lot of things,” Wright said. “It helps you not lose your passion. By splitting my energy and effort to a lot of things, it allows me to fall in love with a lot of different things.”

Cornerback is the position Wright has embraced on the football field.

“One of the cool things is you have a chance to split the momentum of a game in an instant,” he said. “It’s exhilarating to be on that side of the football. It’s one of the hardest positions. You’re going backwards and guarding the fastest player on the field. You have to have short-term memory. If you get down on yourself, you’re not going to be successful. Speed is a big thing, but the best thing I’ve got is technique. I try to make sure I’m in the right position. My knowledge of being a receiver helps me a lot.”