Baroque painter gets her due at last

The Italian Artemisia Gentileschi deserves reassessment from also-ran to hero. 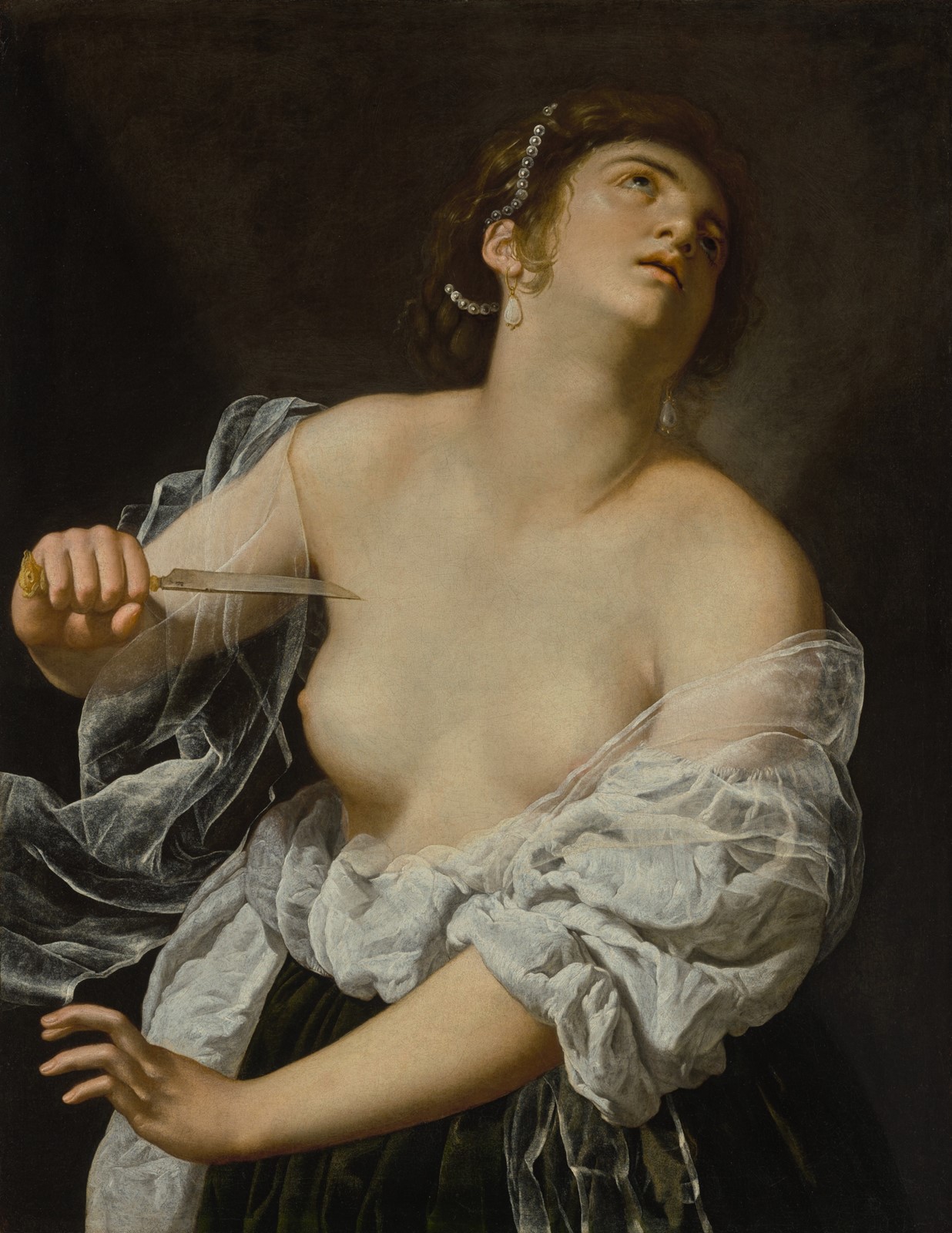 Plague swept through Italy’s southern Mediterranean coast in 1656, ravaging towns and villages in the kingdom of Naples. The devastation was epic, piling up corpses over the course of nearly two years. Not since the infamous Black Death in the 14th century had the toll been so severe.

Estimates are that more than 1,250,000 people succumbed, including half the population of Naples, the capital city. Artemisia Gentileschi appears to have been among them. Cut down at the age of about 63, she was among the most successful painters of her day.

During our own brutal plague, the J. Paul Getty Museum last year acquired her canvas “Lucretia” (circa 1627), only recently unearthed.

Long disregarded as one of art history’s also-rans, she has in recent decades been moving into the top tier of Italian Baroque painters — where she belongs.

In the process, the artist has become a feminist heroine. Artemisia Gentileschi is the Frida Kahlo of European art.

The portrait-size picture that the Getty acquired is now installed in museum galleries. It shows an ancient Roman noblewoman, idealized as the epitome of rectitude, who had been raped by the tyrannical king’s son.

The composition is brilliant. Lucretia is stripped to the waist, pearls entwined in her hair and a delicate sheer scarf wafting around her shoulders. Nudity and fashion become virtual emblems here, signaling the purity, fragility and preciosity of the subject.

Extraordinary fortitude is there too. Gentileschi posed her protagonist on a diagonal, the curve of her arms and shoulders and her angled head a pair of spiraling oval shapes tipped back in space, destabilizing the figure. Lucretia holds a cold, sharp blade to her breast, positioned as a nearly flat, horizontal line that is the only steady thing in an otherwise volatile picture.

Her grip on the knife is firm, the unforgiving dagger at odds with the gauzy fabric fluttering over soft, luminous skin behind it. Light falls from murky darkness at the upper left, establishing a spectral diagonal exactly opposite to the figure’s spatial thrust toward the upper right. The dagger points directly to the place where the two diagonals cross.

X marks the spot. Head tossed up and back, eyes fixed heavenward, Lucretia is about to stab herself to death.

History crafted Lucretia’s suicide, likely merging fact with fiction, as a crushing moral outrage that led to the overthrow of monarchy and the rise of republican government in 6th century BCE Rome. The tragedy of her action was an inflection point. Botticelli, Cranach, Titian, Rubens, Rembrandt — lots of Renaissance and Baroque artists painted different elements of the antique narrative.

The junction of gender and history, often taking the form of sexual violence against women, made Lucretia a feminist heroine. Artemisia represented her as one.

A prodigy with an international clientele, the artist was a major figure in the vigorous 17th century cultural life of Florence, Rome and Venice, where “Lucretia” was painted. Sometimes she outshone the distinguished achievements of her father, Orazio Gentileschi. A gifted painter and follower of Caravaggio, he is noted for his dramatic way with metaphorical subjects from the Bible and Greco-Roman myth.

The Getty owns two large and terrific Orazio paintings, both from around 1622, so just slightly earlier than his offspring’s work. One is “Lot and His Daughters,” a theatrical tableau that charts the Book of Genesis tale of the incestuous seduction of a drunken father by two young women, convinced that the destruction of Sodom — seen going up in smoke in the distant landscape — otherwise signals the end of human life on Earth. The second is “Danaë and the Shower of Gold,” a story from Ovid’s Metamorphoses about the fateful rape of a beautiful princess by Jupiter, the licentious Roman god.

If qualifying phrases about Artemisia like “appears to have been” a plague victim at the age of “about 63” seem unusual for the death of a European artist of such stature — and we’re not talking ancient history here — that’s because the details of her life are only now in the process of being pieced together. The historical record is scattered and fragmentary, much more so than the narrative of her father’s similarly celebrated career — and that of many others.

Many artists’ biographies are incomplete, of course, and a lot more of Artemisia’s story is known today than it was 30 or 40 years ago. Feminist art historians, female and male, have been busy. But many questions remain.

A primary reason for the dearth of data is obvious: Artemisia was a woman. After her death, with no one to carry the banner in a culture driven by the prerogatives and prejudices of patriarchy, her formerly celebrated art slipped into obscurity. There it pretty much stayed until the modern feminist era emerged, steadily bringing her into renewed prominence. Her star, dimmed after her death, continues to rise.

Renewed interest is flushing out long-hidden pictures. “Lucretia” was previously unknown because the painting was unpublished. Check the work’s history of prior ownership on the Getty’s website, and two things jump out: Who it was originally painted for is unknown, while the next citation is an anonymous French private collection 350 years later. The painting was publicly exhibited exactly once — in 2004.

Another painting that stands as Artemisia’s virtual logo represents Judith and Holofernes, a subject she executed three times. A wild revenge saga, it refers to a Jewish widow who seduced an enemy Assyrian general, got him into bed stone-drunk, and then, with the determined help of her dedicated maidservant, hacked off his head with his own sword.

Caravaggio also painted the murder scene. Artemesia’s pictures juice up his harshly illuminated, stentorian drama into a veritable outtake of “Nightmare on Elm Street” — bloody castration symbolism and all.

She even gave her magnificent gore-fest a marvelous sequel, now in the collection of the Detroit Institute of the Arts. Around the time she painted “Lucretia,” she rendered a riveting scene in which Judith and Abra, her maidservant, hurriedly stuff the severed head of grizzled Gen. Holofernes into a bag, anxious about discovery. Their cover-up is illuminated by a single candle-flame — a flickering Christian symbol of light casting out the darkness, subtly sanctifying the killing. A David and Goliath story of a smaller, weaker force overcoming a bigger, stronger adversary gets a heroic feminist rewrite.

Because the stories of Judith and Lucretia revolve around sexual violence, Artemisia’s own history of having been raped at 17 has assumed a central role in discussions of her work. It’s not wrong, although it is a bit reductive. (In a bold move for 17th century Rome, she took her assailant to court — and won. That’s not revenge; it’s justice.) For example, I’ve never read that the rape and incest subject matter of Orazio’s Danaë and Lot were informed by his relationship to his daughter’s trauma, even though he stood behind her throughout the ordeal, which involved an artist-colleague of his as the perpetrator of sexual violence. (Artemisia also painted Lot’s incest story.) Perhaps we simply make an unconscious, socially constructed assumption that Orazio had a fully vested public intellectual life, while more private emotional vectors would dominate a woman’s art.

Those foolish assumptions are being challenged. The Getty has just published “Artemisia Gentileschi,” a marvelously readable volume — the first serious biography in more than 20 years — that’s part of a series on women artists of the Renaissance and Baroque eras, by scholar Sheila Barker. (She’s affiliated with the Medici Archive Project, a research program in Florence.) There’s considerable new information, factual and interpretive. Barker also participated in a fascinating December panel discussion with three other Gentileschi scholars, moderated by Getty curator Davide Gasparotto, very worth watching on YouTube.

As with all artists, Artemisia’s work is complex, informed by broad life experience, both personal and professional. Happily, in the last two decades, the study of her paintings has been widening in productive and exciting ways, giving us a fuller understanding of her challenging involvement with social, political, literary and intellectual currents of her day. There’s a long way to go, and more discoveries are inevitable.

But that’s the thing about an icon: Stature is established but meaning can get stuck like a fly in amber. Gentileschi, as with the more recent Mexican Kahlo, is an icon. She’s even pictured on refrigerator magnets. They may be very different painters in style and content, but Artemisia’s life as an artist resonates just as deeply today.

And that’s the thing about art history. “Let me show you what a woman can do,” Artemisia is said to have once written to a male patron. She did, and she still is.