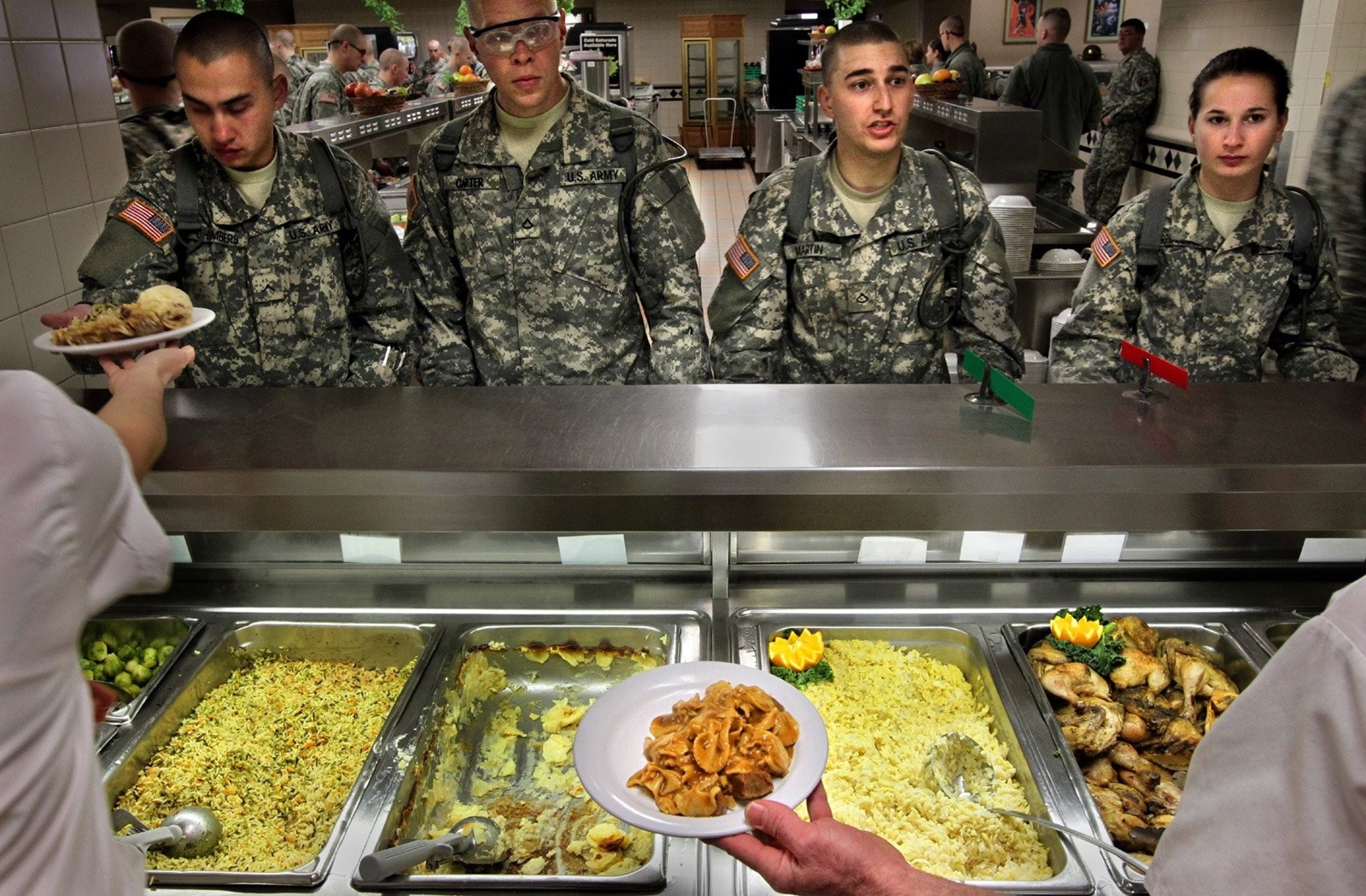 ARMY TRAINEES have three levels of labeled food choices in an effort to improve their fitness as they traverse the serving line inside the dining hall at Ft. Leonard Wood in Missouri in 2011. (Robert Cohen St. Louis Post-Dispatch)
PREVIOUS IMAGE

Members of the military serve their country in myriad ways. That includes helping researchers figure out whether obesity is a contagious disease.

A new study involving thousands of military families suggests that the answer is yes.

The idea that fatness can spread like chicken pox or the flu may sound downright crazy. But how else do you explain the fact that families assigned to Army bases in communities with higher rates of obesity were more likely to be overweight or obese compared with families sent to bases where excess pounds were less common?

That finding, published this week in the journal JAMA Pediatrics, offers the first quasi-experimental evidence to support the theory that obesity spreads through social contagion.

The theory is based on observations by Dr. Nicholas Christakis of Yale and James Fowler of UC San Diego, who found that various kinds of behaviors appear to propagate through social networks. They mapped out friend and family relationships among three generations of people who participated in the long-running Framingham Heart Study and found that things like smoking, happiness and divorce seemed to spread as if they were contagious.

Obesity was one of the very first social contagions they identified. In a 2007 study in the New England Journal of Medicine, they reported that if a person’s friend, sibling or spouse became obese in a certain period of time, the chances that he or she would become obese as well increased by 37% to 57%.

A pattern like this could be explained in other ways, such as the fact that people tend to consort with others who are similar. It’s also possible that people who are in the same environment are being subjected to the same influences and reacting in similar ways.

A pair of economists realized that the military had done something quite similar by assigning servicemen and women to live on Army bases across the country. Those assignments weren’t random, of course, but since they weren’t based on weight, they provided the basis for a natural experiment.

Ashlesha Datar of USC and Nancy Nicosia of the Rand Corp. gathered data from the Military Teenagers Environments, Exercise, and Nutrition Study, also known as M-TEENS. The kids who were part of this study had a parent assigned to one of 12 bases. The obesity rates in those communities ranged from 21% in Colorado’s El Paso County (home of Ft. Carson) to 38% in Louisiana’s Vernon Parish (home of Ft. Polk).

Datar and Nicosia pulled data on 1,111 teens and 1,314 parents. About one-quarter of the teens and 75% of the adults (most of whom were active duty personnel) were either overweight or obese, based on their body mass index.

After adjusting for factors such as age, sex, education, income and military rank, the researchers found that members of military families were more likely to be overweight or obese if they had been deployed to a county where obesity was more of a norm.

Other aspects of the data extended the contagion metaphor.

The more that military families were “exposed” to their surrounding community, the more their weight status was tied to the people around them. For instance, the relationship between body mass index and the county obesity rate was stronger for teens who had lived on or near a particular Army base for more than two years compared with teens who were newer arrivals. Also, the link was stronger for families who lived off-base than for those who lived on-base.

“Social contagion may explain our findings,” the study authors concluded.

Although this natural experiment was much better than any study Datar and Nicosia could have pulled off in the real world, it was far from perfect, they acknowledged.

Living in geographic proximity to someone doesn’t necessarily mean he or she is part of your social network, they wrote. Most of the height and weight data used to compute BMIs were self-reported. And military families may not be representative of American families as a whole (although the prevalence of high BMIs was similar in both groups).

It also would have been nice to know the BMIs of teens and parents before they were relocated to a new place, as well as the county obesity rate for the base they left.

Despite these limitations, the findings should strengthen the case that obesity can be contagious, according to an editorial that accompanied the study.

“If social contagion is having an effect, you would expect the longer the exposure, the greater the risk, which is what [Datar and Nicosia] found,” the editorial authors wrote.