Trump’s defense is short on facts

Attorneys for the ex-president dodge questions and finish quickly in his Senate impeachment trial. 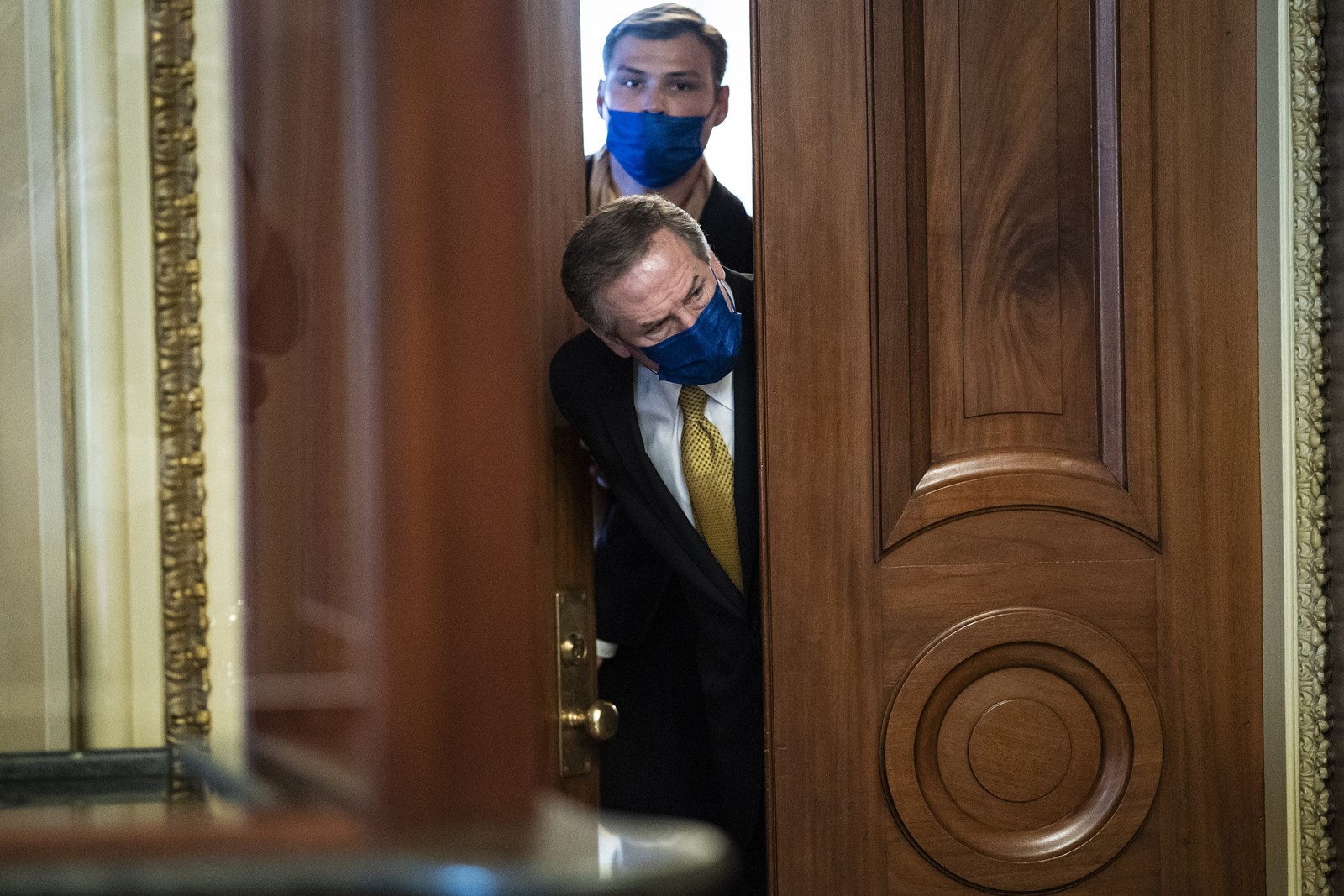 Former President Trump’s defense attorneys echoed the combativeness of their client Friday, embracing falsehoods and misrepresentations as they sought to recast his actions leading up to the mob violence at the Capitol.

Trump’s team sprinted through their defense at the Senate impeachment hearing, hoping to quickly move the proceedings to a vote that now may come as early as Saturday. They were dismissive of many of the queries from lawmakers that followed in a question-and-answer session, including from some Republicans who asked the attorneys to detail what actions Trump took to quell the insurrection.

Defense attorneys responded as if it were not their responsibility to know.

The haste with which the attorneys moved reflected a Republican caucus that has already signaled it is unlikely to provide adequate votes for a conviction.

Trump was not present at the 2½-hour defense presentation, but it was laden with his signature hyperbole and grievances. His attorneys repeated claims that Trump was the most pro- police president in history and that the evidence against him was manufactured by vindictive enemies.

During one line of argument, Trump’s attorneys stated that the first rioter arrested in the Jan. 6 insurrection was not a supporter of Trump, but of the leftist antifa movement. There is no evidence to support the assertion.

Attorney Michael van der Veen also argued that Trump encouraged his supporters to respect the electoral college count and to protest only peacefully, a claim directly contradicted by bountiful evidence.

“To claim that the president in any way wished, desired or encouraged lawless or violent behavior is a preposterous and monstrous lie,” Van der Veen said. The defense team repeatedly sought to cast Trump’s encouragement of the rioters at the Capitol to “fight like hell” as the same style of constitutionally protected speech that all politicians frequently use to rally supporters around their policy and political priorities.

At one point, the defense team played an 11-minute video with various clips of Democrats using the word “fight” spliced together. It was complemented by clips of Trump talking about the need for law and order during the protests that erupted over racial violence over the summer, while Democrats expressed support for the protesters.

“It feels like they’re erecting straw men to then take them down, rather than deal with the fact that the events of the 6th happened, including Donald Trump doing nothing to protect this place,” Sen. Michael Bennet (D-Colo.) said during a break.

When the proceedings turned to questions from lawmakers, Trump’s attorneys deflected when asked by Republican Sens. Susan Collins of Maine and Lisa Murkowski of Alaska — and then again, by Democrats — what specific actions he took, if any, to stop the mob that had infiltrated the Capitol.

“With the rush to bring this impeachment there has been no investigation into that,” Van der Veen said, suggesting it was the job of Democrats to fill in the timeline of his client’s actions.

Collins later told reporters that she found the answer unsatisfactory. “I think it’s a very important question, of when did the president know that the barricades were breached and what did he do at what time to stop the rioting, and so I wish I had gotten the answers to that,” she said.

The defense attorney later bristled over claims that Trump put former Vice President Mike Pence in harm’s way by tweeting a criticism about the vice president around the time rioters breached the Capitol building and security officers were rushing him to safety.

Trump’s attorneys said Friday that the president had no idea Pence was in danger at the time. But Alabama GOP Sen. Tommy Tuberville told reporters that he was on the phone with Trump at the time Pence was being rushed from the Senate, and told Trump what was happening.

Tuberville recounted the phone call to reporters again on Friday. “I said, ‘Mr. President, they’ve taken the vice president out,’” Tuberville recalled. “‘They want me to get off the phone, I gotta go.’”

“Unfortunately, we are not going to know the facts,” Van der Veen said during the trial, again blaming Democrats for not having the details of a phone call his client made.

House impeachment managers said Trump’s attorneys offered no examples of actions Trump took to stop the riots because there are none.

“He knew the violence was underway,” said Stacey Plaskett, a delegate from the Virgin Islands who is one of the Democratic impeachment managers. “We know he knew that. We know he did not send any [law enforcement]. We did not hear any tweets. We did not hear him tell those individuals, ‘Stop. This is wrong.’... They were doing what he asked them to do, so there was no need for him stop them.”

The defense attorneys’ arguments were seen by at least some Republican lawmakers as an improvement over their meandering performance in opening remarks this week. The lawyers spent much of their time Friday focused on legal arguments, making the case that Trump’s words were protected by the 1st Amendment and that his actions on Jan. 6 did not meet the definition of incitement.

“The defense is more on their game today than what I saw the other day,” Murkowski said during the break. Wisconsin Sen. Ron Johnson, expressing the sentiment of Trump loyalists who are eager to move to a vote and shut the trial down, said that “the president’s lawyers blew the House managers’ case out of the water. They just legally eviscerated their case.”

But it was unclear if Trump’s legal team won over any of the Republicans who have been wavering. Asked if he was satisfied with the case the defense made, Louisiana Sen. Bill Cassidy said, “not really.” He said he is undecided on whether he will vote to convict.

The Trump team used just a fraction of the 16 hours allotted for the defense, a sharp contrast from the approach taken by House Democrats prosecuting the case against Trump.

The Democrats spent 10 hours over two days methodically building a case around harrowing video that recounted the mob violence that overtook the Capitol on Jan. 6. It included never-before-shown security footage highlighting how dangerously close rioters came to face-to-face confrontations with lawmakers, including scenes of senators sprinting away from the mob.

The presentation unsettled lawmakers and put allies of Trump in an awkward spot. It left television news saturated with the fresh footage of the insurrection, along with the former president’s rally cries, tweets and false claims leading up to the mob overrunning the Capitol. Also highlighted was Trump’s failure to take meaningful action to protect lawmakers and restore order as the violence unfolded.

Yet many Republicans remain anxious about the political consequences of crossing Trump and argue that the impeachment process should apply only to a sitting president. It remains unlikely Democrats can win over the 67 senators they need to convict Trump.

Another Trump attorney, David Schoen, argued that the impeachment process was a sham that denied Trump due process. Schoen accused House managers of manipulating the evidence, rushing the trial and failing to share security footage with the public and the defendant before dramatically unveiling it at trial.

But Trump’s legal team had earlier agreed to the rules under which the Senate would operate during the trial, including when they would receive evidence and information from the House managers.

Defense attorneys argued that when Trump encouraged the rioters to turn their anger on the lawmakers in the Capitol, his intention was for them to coalesce around finding candidates to challenge them in the next election, not physical violence.

“You knew what the president really meant,” Schoen said. “He meant the crowd should demand action from members of Congress and support primary challenges.”

Even as a half-dozen more moderate Republicans in the Senate signaled they might vote to convict Trump, the question-and-answer session made clear that the large majority of Republicans in the chamber are not leaning in that direction. Some had already expressed their plans to vote for an acquittal before the trial even ended.

Among them was Republican Sen. Ted Cruz of Texas, a Trump loyalist who said House managers did not prove Trump incited the crowd.

Cruz was among a group of GOP senators who met with Trump’s attorneys Thursday night and throughout the day Friday, even though they are jurors in the trial. “We were discussing their strategy for tomorrow and we were sharing our thoughts, in terms of where the argument was and where to go,” Cruz told reporters following the first meeting.

After Day 4 of the trial ended Friday, South Dakota Sen. John Thune, a Republican, said he suspected few of his colleagues were persuaded by them one way or the other. “I don’t know, at this point, how many minds get changed,” he said.