Denver to take a new trip to polls: Magic mushrooms

After pot, a drug with medical potential may be decriminalized. 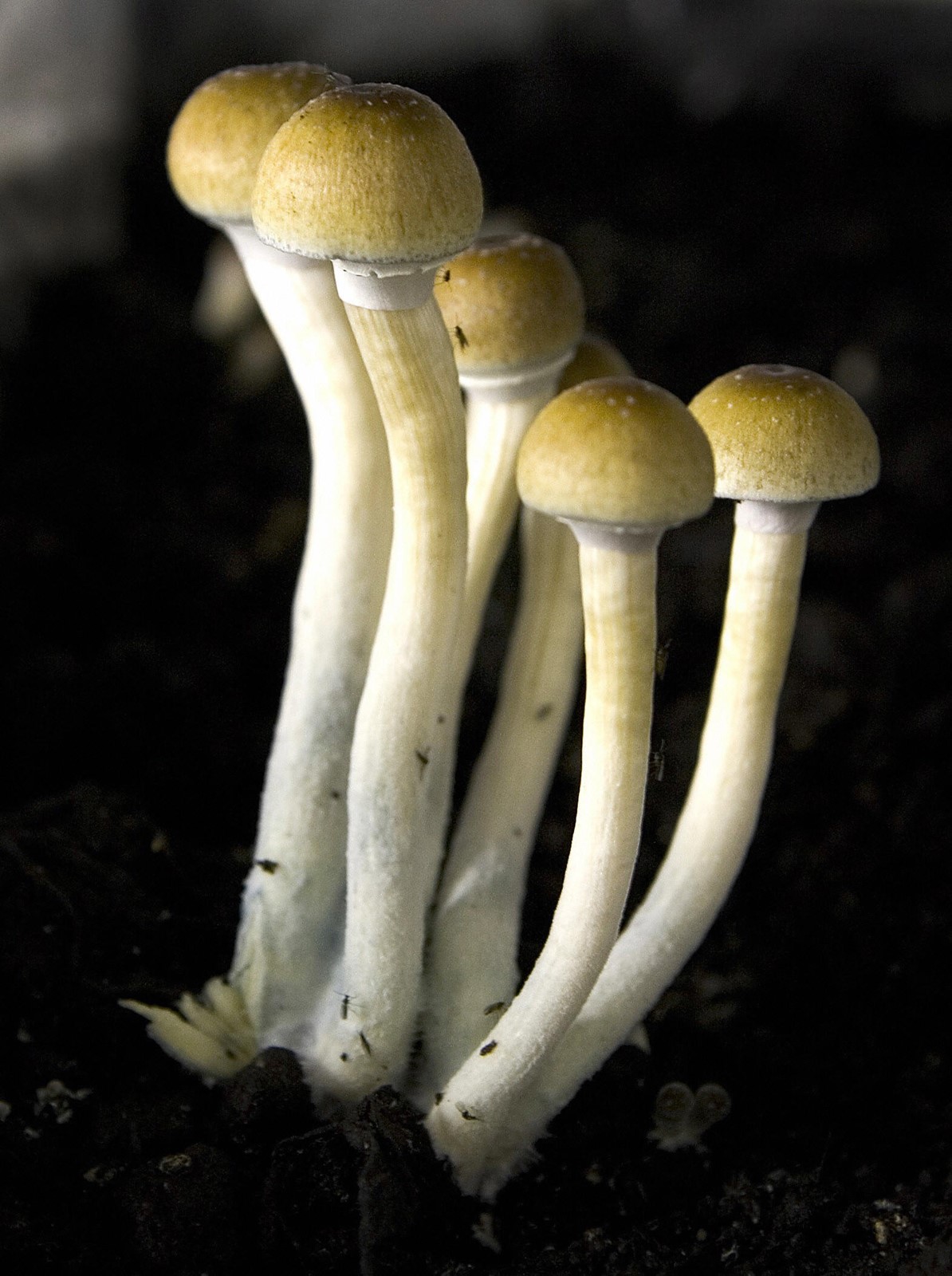 PSYCHEDELIC drugs have moved out of the shadows in recent years. (Evert-Jan Daniels AFP/Getty)
PREVIOUS IMAGE

Justin was 6 years old when the seriousness of his creeping mental illness became apparent. One day he set aside an entire page in his diary and wrote: “I want to die.”

He was eventually put on medication for bipolar disorder. His symptoms worsened into his 20s and 30s, and he became dependent on alcohol.

Then a friend recommended an unusual — and illegal — treatment: magic mushrooms.

“It was a transformative experience,” said Justin, who takes small doses three times a week. “I was on six medications, and now I just use mushrooms and a mood stabilizer. I’m a different guy. I’m fun to be around. Once I couldn’t even cry. Now I can.”

He asked that his last name be withheld because possession of the naturally occurring mushrooms, which contain the psychedelic drug psilocybin, is punishable by a fine, prison or both.

Stories like his have become the centerpiece of a campaign here to change that. On Tuesday, Denver voters will decide on a measure to decriminalize the drug.

It would be the first city in the nation to do so, potentially opening a new frontier in state and local efforts to circumvent the federal government’s longtime crackdown on mind-altering substances.

California failed to get a similar measure on the ballot last year, and activists in Oregon hope to put the issue to a statewide vote in 2020.

Much as they did for marijuana, a much more benign drug, activists are touting the potential medical benefits of psilocybin to win public acceptance for a drug known more for its recreational use.

“This measure is backed by strong medical data,” said Kevin Matthews, who manages the campaign for Decriminalize Denver, the group leading the initiative, and credits the mushrooms with helping him overcome a crippling depression. “There is clearly a psychedelic renaissance underway, and we wanted to open a grass-roots campaign to address this issue.”

Indeed, over the last few years, psychedelics have moved out of the shadows.

People book custom tours in Peru to imbibe ayahuasca, a hallucinogenic drink. The bestselling book “How to Change Your Mind,” by Michael Pollan, has highlighted the science of psychedelics and their medical potential.

In October, the FDA gave a go-ahead to a London-based company, Compass Pathways, to test psilocybin in people with treatment-resistant depression. The company received a “breakthrough therapy” designation, which is meant to speed development of drugs when preliminary evidence suggests they may be significantly better than current therapy in treating serious conditions.

Critics of the Denver campaign point out that for all the focus on the drug’s medical potential, the initiative would allow psilocybin for personal use of all types.

“Denver is quickly becoming the illicit drug capital of the world,” said Jeff Hunt, director of the Centennial Institute at Colorado Christian University, a conservative think tank. “The effort to decriminalize is the first step in a movement to totally commercialize the drug.”

Denver, with its strong libertarian leanings, decriminalized marijuana in 2005, seven years before Colorado became the first state to legalize it for recreational use.

The City Council approved a measure in November to create the nation’s first safe injection site for intravenous drug users. That plan was shelved after state and federal authorities declared it illegal.

The psilocybin ordinance, whose proponents collected more than 8,500 signatures to place it on Tuesday’s ballot, would prohibit the city and surrounding county from “spending resources” on enforcing criminal penalties for possession.

“Our concern is that the drugs will have long-term effects that we don’t understand yet,” Hunt said.

Even some scientists who see enormous medical promise in psilocybin and similar drugs urged caution.

“I support decriminalization, but I would be concerned if it became wide-open without any controls,” said Dr. Charles Grob, a UCLA psychiatrist who has researched hallucinogens for more than 30 years. “Some people may have a fantastic experience, but a minority may decompensate and get worse. I’d love to see some basic safety parameters in place.”

The drug can cause psychotic reactions in people with schizophrenia or even a family history of the disease, he said.

“Then there is the issue of monitoring. Who will be looking after you?” he said. “It would not be safe to drive a car, and you don’t want people walking around unescorted having powerful internal experiences. It needs to be conducted by trained facilitators who sit with them the entire time, maintain safety and can follow up afterward.”

Grob said dosing is another concern, because psilocybin amounts vary from mushroom to mushroom.

Still, his own research has shown that the drug can reduce depression among advanced cancer patients, some of whom have had powerful mystical experiences.

“At the end of the day, what is most impressive is that people who had been chronically unresponsive to treatment are functioning on a higher plane,” he said.

The potential benefits were recognized as far back as the 1950s, when researchers discovered that psilocybin and other hallucinogens had positive effects on alcoholism, anxiety and depression.

Then came the turmoil of the mid-1960s and an explosion in recreational drug use. For some, psychedelics were a profound revelation, opening their minds to new ways of thinking and living.

But high doses could cause “bad trips” and exacerbate mental illness, bolstering a growing view that drugs were a national threat.

In 1970, President Nixon signed the Controlled Substances Act, outlawing psilocybin and other drugs.

The recent resurgence of psilocybin has led to calls from scientists for the federal government to reconsider the drug’s prohibition.

Researchers from Johns Hopkins University said recently that if psilocybin proves safe and effective in placebo-controlled clinical trials, it should be reclassified from a Schedule I drug with no known medical benefit to a Schedule IV drug available by prescription.

That seems unlikely to happen anytime soon, given that the federal government has refused to budge even on marijuana, which has been legalized for medical or recreational use in dozens of states.

Deb, a Denver therapist who asked that her last name be withheld to avoid legal problems, provides mushrooms to clients and helps guide their “journeys.”

“I make a tea of four caps and stems and let it steep for an hour. They drink it and eat the mushrooms,” she said. “Sometimes there is nausea and the need to purge. We call that getting well.”

She gets her mushrooms from a network of sellers in Denver.

“You want someone who has good energy, not a drug dealer,” she said. “The most frightening thing for me is picking up the big bag of mushrooms.”

She said the qualities of the drug that make it popular for recreational use — its ability to induce visions, introspection and a sense of belonging — have helped her patients realize that life is not as constricted and earth-bound as they originally thought.

He said he drank three cups of mushroom tea and lay on a yoga mat in the backyard. Deb sat beside him for six hours, occasionally singing and chanting.

“It was very much a spiritual experience. I could see the other side, I could see my dad who passed, they were there to reassure me that there is more than this world,” said Brad, who asked that his last name be withheld. “I felt one with the universe, and I realized that the only thing that mattered was love.”

Since then, nearly all of his anxiety has vanished.

“It’s been nine months, and every day it is better,” he said. “The mushrooms set me on a different path.”