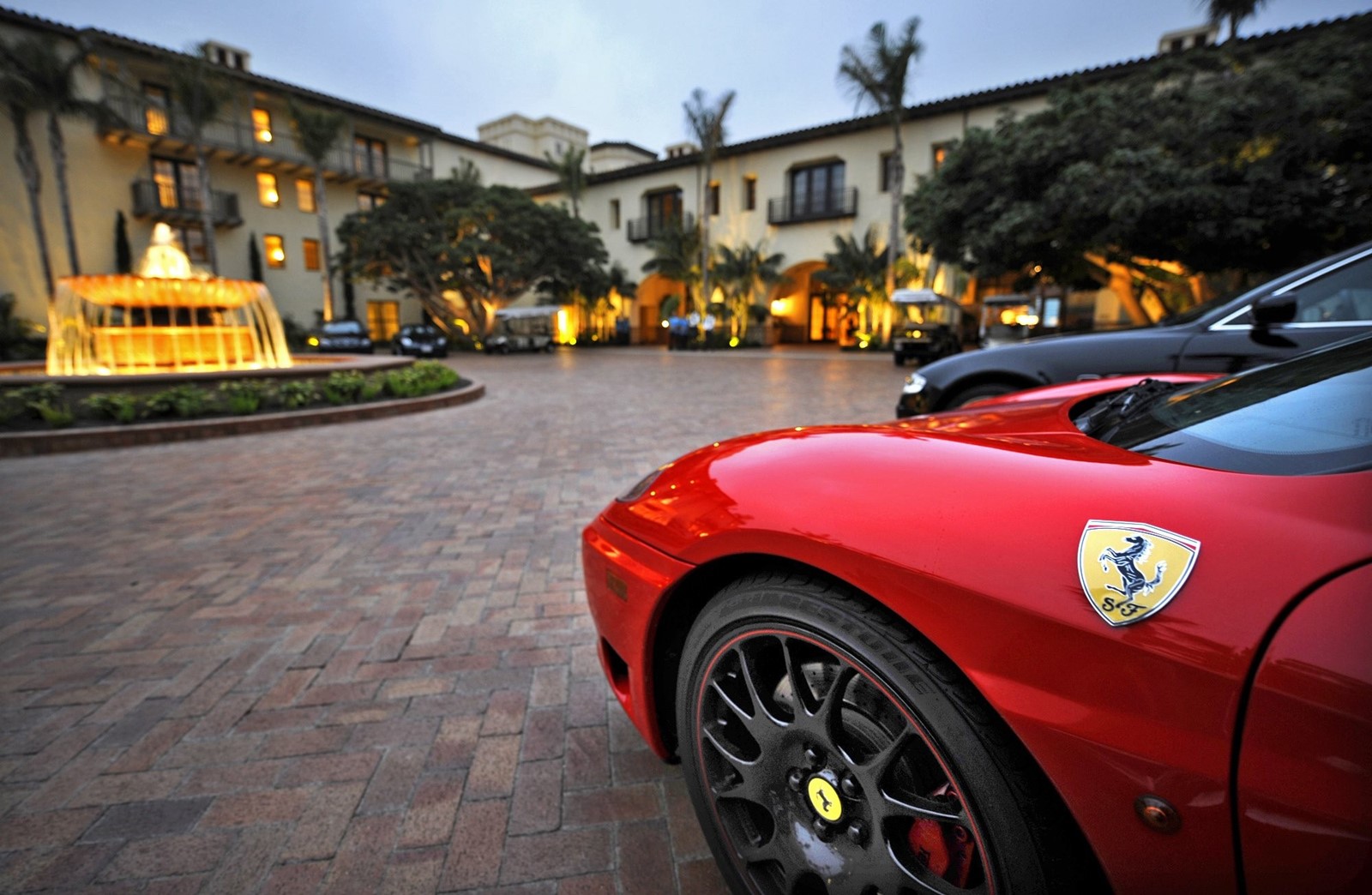 THE RESORT says the dispute has cost it business conferences and other events, leading to a decline in revenue. (Wally Skalij Los Angeles Times)
PREVIOUS IMAGE

A young couple with plans to hold their fall wedding reception at the swanky Terranea Resort got an unexpected message on their online wedding planning site.

“Congratulations on your engagement! I am sorry to say that nine women, employed or formerly employed at the Terranea Resort, came forward with allegations of sexual harassment and other misconduct of a sexual nature at the resort,” read the message, sent by an organizer for a labor union embroiled in a two-year feud with the resort.

The note, posted on a page where guests could RSVP, didn’t persuade the couple to cancel. But it — along with similar messages to other wedding couples and guests — sparked frantic calls to resort managers.

The dispute between Terranea and Unite Here Local 11 is growing increasingly bitter, drawing into its vortex brides, grooms, tech company executives and university officials who frequent the 102-acre resort on the bluffs of Rancho Palos Verdes.

The clash has touched on volatile topics such as sexual harassment, the #MeToo movement and the rights of workers to organize.

At one point, Terranea employees were sent an email with a link to a YouTube video that depicted resort President Terri Haack as a pig wearing pasties — a video the union denies producing.

The dispute has cost Terranea business conferences and other events, leading to a revenue decline, Haack said, although she wouldn’t divulge how many events and how much revenue were lost.

“They have intimidated some groups into canceling events, which costs our employees hours and tips that they will never get back,” she said.

Tech news site Recode held its annual Code Conference at Terranea for several years in a row but announced plans to relocate this May to Scottsdale, Ariz., after a plea from Unite Here to boycott the resort.

“We have expressed our strong concerns about issues at the resort that have arisen in recent months to Terranea management, and are urging Unite Here Local 11 union and Terranea management to reach agreement in their ongoing negotiations,” Kara Swisher, co-founder of Recode, said on Twitter last March.

Labor experts say unions have been turning to more extreme tactics in the last few years because traditional forms of protest — picketing and distributing leaflets — no longer get the result unions want.

At the center of the dispute are the 1,000 employees who tend to visitors at the picturesque South Bay resort’s 582 luxurious rooms, multiple restaurants and a spa.

In 2017, Unite Here Local 11, which represents about 31,000 workers in 60 hotels in Southern California and Arizona, began trying to organize the resort’s employees.

In October 2017, Haack said she was approached by Unite Here supporters demanding that she sign a “neutrality agreement,” which would give union organizers access to the property to collect signature cards. Under the agreement, Haack said, she would be prohibited from speaking out against the union and must automatically recognize the union if more than 50% of the workers signed cards.

Haack said she refused to sign the agreement but instead wrote to Unite Here on Jan. 15, 2018, offering to allow a secret ballot vote, under the control of a third-party mediator. Haack said the union has yet to reply to her request.

Initially, the union distributed leaflets that called for the resort to allow a “fair process to form a union.”

But later, when several resort workers raised allegations of sexual harassment and misconduct — and the #MeToo campaign gained strength — the union focused its campaign almost exclusively on the abuse accusations.

Those included allegations in a lawsuit filed by Sandra Pezqueda, a dishwasher working for a temporary staffing agency at the resort who said she was fired for complaining about sexual harassment by her supervisor. Pezqueda settled the lawsuit against the temp agency for $250,000, but Terranea was dismissed from the suit without paying her anything.

Pezqueda was among several women named “Persons of the Year” by Time magazine in 2017 for helping start the #MeToo movement.

Another woman, Silvia Jasmin Sanchez, 26, sued Terranea last year, alleging that a security manager at the resort sent her suggestive text messages while stalking her through a security camera. That lawsuit has not been scheduled for trial.

Haack declined to comment on the Sanchez case except to say that the resort has a zero-tolerance policy against sexual harassment. She also said she has looked into each allegation of sexual harassment raised by the union and has “not been able to substantiate a single claim.”

Last October, the union and several women’s rights groups held a news conference highlighting sexual misconduct allegations and calling for a boycott of the resort.

Union leaders say they are interested in achieving a fair process to unionize resort workers and bringing attention to the sexual misconduct allegations. But the union has not spelled out the steps the resort must take before the union agrees to lift the boycott.

“Our campaign is about empowering women,” Sulkes said.

The union has spread its boycott message to brides, grooms and guests of weddings planned at the resort, as well as companies that regularly hold conferences or have business partnerships with Terranea, Sulkes said.

“It’s information I would want to know as a prospective bride,” she said. “We communicate with all kinds of groups.”

Several wedding couples and guests who have been contacted by Unite Here through a wedding planning site called the Knot told Terranea representatives that they don’t want to speak publicly or have their names published.

The Times viewed a page from the Knot wedding site that shows a message from the union, directed at a couple that plans to hold a wedding reception at the resort this fall.

“Did resort management inform you about the boycott?” said the message posted on the “guest book” page of the site. “If not, I am sorry that you are first hearing about it from us.”

Asked to comment, the message’s author, union organizer Jonah Breslau, said in a statement: “Terranea leadership has not taken the steps that we believe are necessary to address the problems workers have raised regarding sexual harassment and assault.”

Among the companies contacted by the union and urged to join the boycott are the auditing firm PricewaterhouseCoopers, which has held meetings at the resort, and the Lexus division of Toyota Motor Corp., which supplies luxury cars to guests at the resort’s high-end suites. USC Athletics, which has been sponsored by Terranea since 2012, was also urged to boycott.

In separate statements, Lexus and USC said they stand against workplace sexual harassment and will monitor the situation at Terranea. Neither would say if it planned to join the boycott.

To bring attention to its boycott, the union created a website, metooTerranea. org, to recount the stories of Pezqueda, Sanchez and others, and to urge companies that do business with the resort to cancel their reservations.

Unite Here also collected about 4,000 signatures to qualify a measure for the Nov. 5 Rancho Palos Verdes citywide election that would require Terranea and the nearby Trump National Golf Club to provide panic buttons for employees who work alone in isolated locations. Haack said her employees already have panic buttons.

The initiative would also require that workers are paid at least $15 an hour, starting retroactively on Jan. 1, 2019, and that staff aren’t forced to work shifts of more than 10 hours, except in emergencies and only with worker consent. The measure would also call on the resort to provide access to vanpools, private buses or passes for mass transit to help employees get to work.

An economic analysis, commissioned by the city of Rancho Palos Verdes, said the initiative would cost Terranea up to $8 million a year by 2022.

Haack paints the union’s tactics as a smear campaign to force her to let the union collect signatures and unionize her staff — a charge that Sulkes, the union organizer, rejects.

“It’s very convenient to paint it as a union wanting to grow and that’s not what it is about,” she said.

If the resort is losing money over the boycott, Sulkes said that Terranea is to blame.

“They’ve had months to deal with the issue and they choose not to,” she said.