The Boba Fett of architecture? 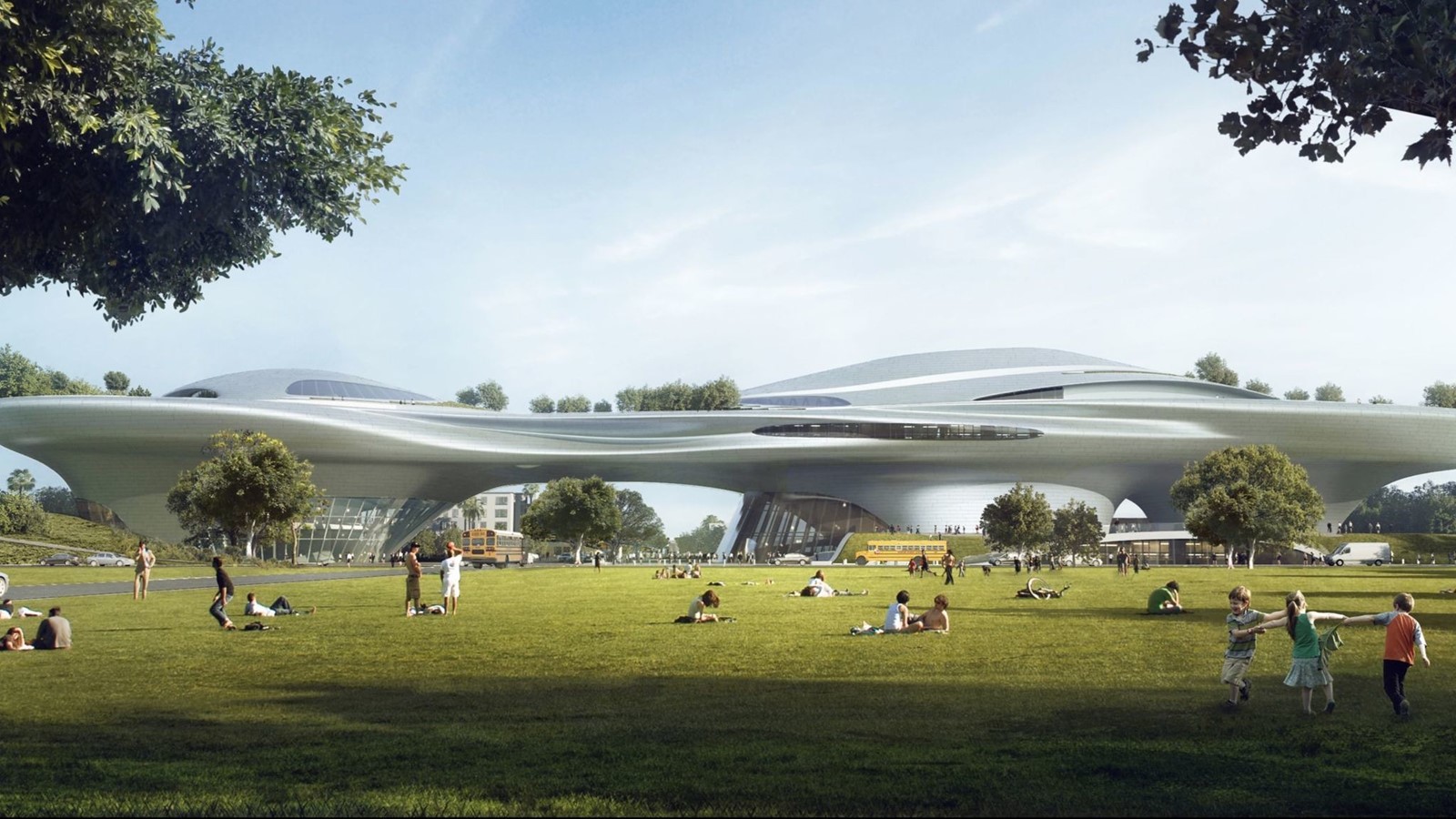 THE LUCAS MUSEUM of Narrative Art in Exposition Park, as designed by Ma Yansong’s MAD, will look like a shapeless cloud hovering above the city. (Lucas Museum of Narrative Art) 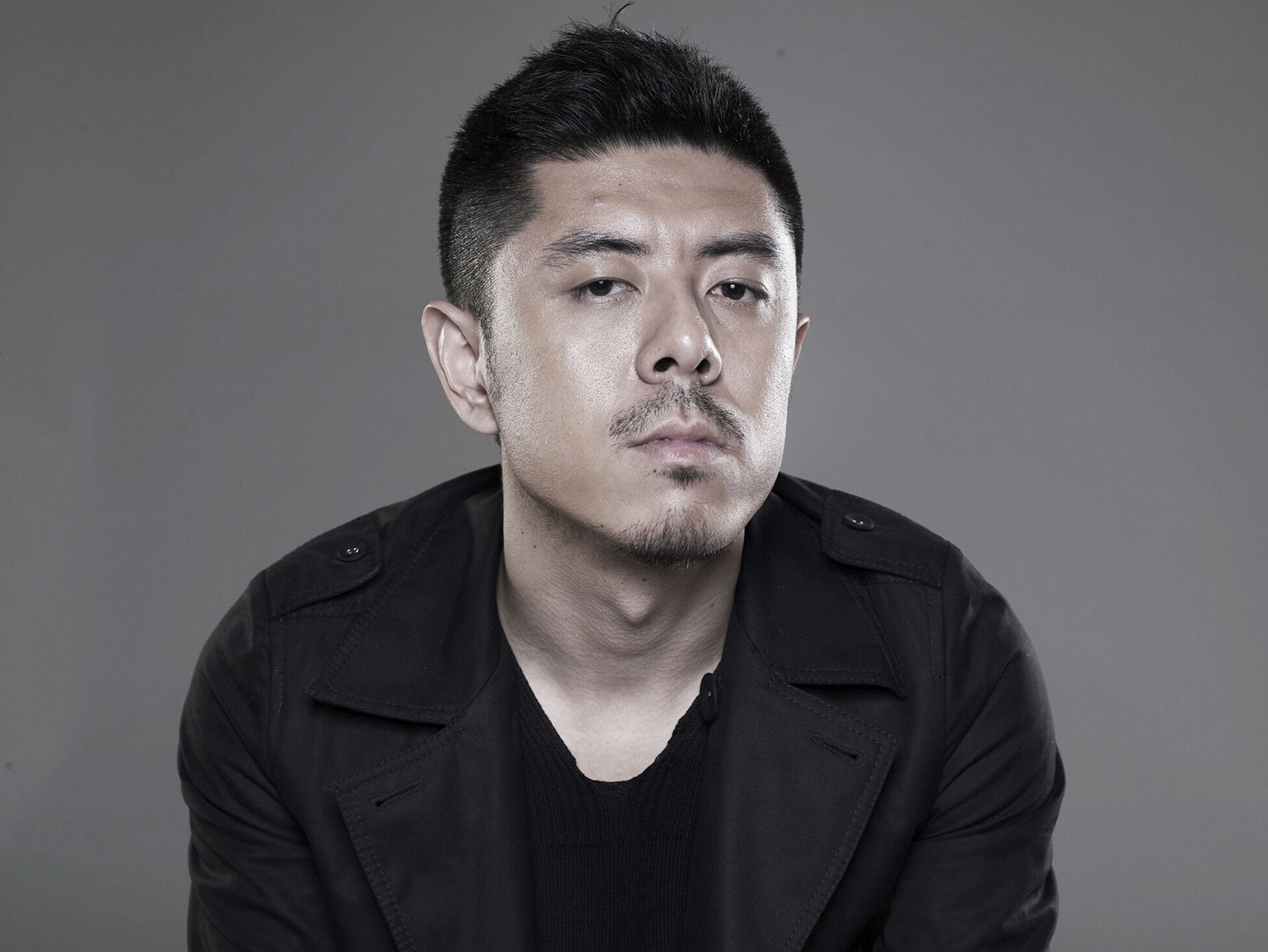 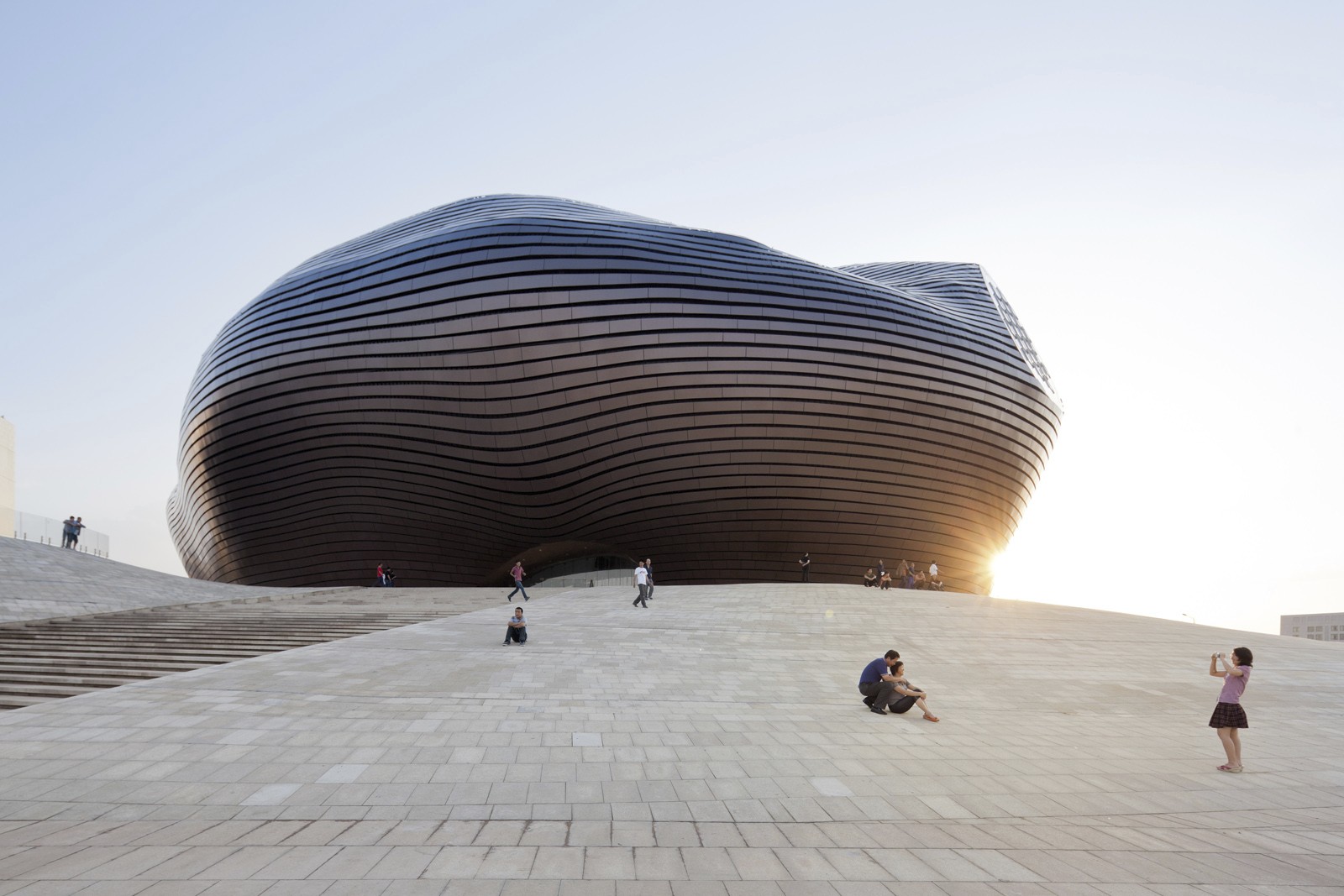 If you were to have wandered around Exposition Park before the city’s coronavirus closures, you would have come across a construction site next to the Los Angeles Memorial Coliseum: yellow and red cranes, rows of trailers and a raised metallic hulk that looked like the damaged Millennium Falcon undergoing repairs before it rejoins the rebel fleet.

By now many Angelenos are aware that this structure will eventually be the curved, shimmering Lucas Museum of Narrative Art, featuring George Lucas’ sizable collection of paintings, illustrations, photography, digital art and film memorabilia — all dedicated to the craft of storytelling.

Ma, who makes his home in Pacific Palisades, is in fact a superstar in his native China, where he has completed skyscrapers, opera houses, museums, apartments and entire neighborhoods. But both there and here, like a quiet, mysterious character in one of Lucas’ tales (Boba Fett comes to mind), he hovers in the background, nonetheless wielding enormous power.

This is exactly how he likes things. Ma, a man of few words, lets his images, and his ideas, do the talking.

Growing up in Beijing, Ma spent hours at a time drawing horses, birds, fish and landscapes. He explored the hills and ponds that border the Forbidden City, not far from his home. He wanted to study film in college (just one reason that his pairing with Lucas, and Los Angeles, made so much sense), but his teachers persuaded him instead to apply to architecture school in Beijing, where he first flailed under strict rules, emphasis on rote repetition and obsession with pure, practical, modernist architecture.

This all changed when he discovered the work of free-thinking architects like Frank Gehry and Zaha Hadid, who flouted convention and cultivated their own feisty voices. Eventually Hadid would become Ma’s mentor at Yale, and Ma would go on to work for her after interning with another Yale teacher, architect Peter Eisenman.

As Ma set out on his own, founding MAD (short for Ma Design) in 2004, that initial spark of freedom became the core of his architecture. Wanting to chart a different path from his mentors, and from the buildings he knew, he coupled this energy with a somewhat surprising model for someone who worked almost exclusively in dense cities: nature, the longtime passion that he viewed as the ultimate escape from our mundane, regimented urban world.

“Nature is about freedom,” Ma said. “It’s connected deeply to our spirits. If we can capture its feeling, we can forget the constraints of the material world.”

Ma further distilled this philosophy with his study of Shan-Shui City, a long-evolving Chinese concept combining urban construction and the natural environment — keeping man both out of nature and in nature at the same time.

“What if we had density and towers and urban structure, but the chief focus of it all could be the spiritual quality of nature?” asked Ma who considers this to be our future, an antidote to the soullessness of our cities.

This doesn’t mean Ma creates buildings that look like giant trees, faced with rocks and ivy. He creates undeniably contemporary structures, incorporating the materials of the present — glass, steel, concrete, aluminum — shaped and inspired not by surrounding buildings but by ethereal elements like wind, water, snow drifts and eroded mountain peaks.

The structures can be so surprising that when you see a picture of one, you find yourself looking twice to make sure it’s real. It’s a purposely discordant combination of worldly and otherworldly that’s meant, Ma said, to jar us from our society’s dullness and practicality, and to trigger visceral emotion, the awe we find in nature.

The Lucas Museum, clad in curving fiber-reinforced panels and raised like a bridge high above its site, creates a greenery-edged plaza and a new gateway to Exposition Park. Although many have likened the design to a spaceship, Ma thinks it will look like a shapeless cloud, hovering over the city. Instead of creating a dialogue of sorts with its neighborhood, or with the city’s buildings in general, it connects to the grand scope of the region: hills, mountains, valleys and ocean. Ma likes the idea that people will wonder what it is when they see the building, floating in the sky above them.

Ma has another filter through which he sees architecture. He prefers to think of the Lucas building, like all of his work, not as a building at all but as an environment, a scene.

He’s always been thrilled by film’s ability to, like nature, trigger emotion, to help us escape. This is but one of many explanations for his deep connection with filmmaker Lucas and with Los Angeles, a place rooted not only in the escapism of film but also in what Ma calls “extreme freedom.”

Unlike most cities, he said, the most contextual buildings here are those that look different from what exists. A good example is by his own firm: a new condo complex in Beverly Hills, the project that drew MAD to Los Angeles in 2014. It somehow incorporates gardens, rolling hills and plant-sided homes with peaked roofs, all along Wilshire Boulevard.

Lucas chose Ma in a 2014 competition to design his museum, at the time planned for Chicago. Imagine a permeable, mountainlike form, topped by a metallic crown, rising on a site along the city’s lakefront.

That plan, as well as Lucas’ earlier attempt (by Dallas-based Urban Design Group) to build a much more traditional project in San Francisco’s Presidio National Park, was scrapped among local protests and legal battles. Former MAD associate partner Daniel Gillen, who now works at SOM in Chicago, said Lucas and his team were smitten the moment they saw Ma’s Chicago proposal.

“As soon as they wheeled the model in, they were like, yeah, that’s it,” Gillen said. He added that Lucas’ choice was as bold as Ma’s design. “Who proposes something like that? It’s someone who says, ‘Let’s just go for it.’ They have that in common.”

After the museum met resistance in Chicago, Lucas decided that wherever he wound up building, he wanted Ma on the design. Despite their very different backgrounds, Lucas and Ma are eerily similar.

Both inject emotion into their work, and both tend to channel a poetic past and a visionary future for inspiration rather than dwell in the mundane present. They both border on recklessness in their lack of fear, a key trait for pulling off the near impossible. And unlike many in their positions, they’re quiet, understated leaders who make it clear who’s in charge but are good at listening to advice. Instead of imposing loud, extroverted personalities, they expertly, and intuitively, pull ideas out of talented people.

“He understands what I’m doing instinctively,” Ma said of Lucas. “Sometimes I don’t need to use words to explain. He can just feel it.”

Their feedback loop goes way back: Ma’s wavy Ordos Museum in China’s Inner Mongolia was the reason Lucas put him on his museum shortlist. That project, Ma said, was inspired by a desert vessel he had seen years before, in “Star Wars.”

Ma is not without his detractors. Some wonder if his imaginative forms are too slick, too corporate to be rooted in nature. They ask if they are too detached from their urban contexts. Critics in China have panned his work as too Western. Critics in the West have declared that it needs more rigor, investigation, detail.

Chicago Tribune critic Blair Kamin at various times described the failed Lucas Museum in Chicago as “overly abstract and under-detailed,” “a giant lump,” a “science fair volcano” and “giant daubs of Marshmallow Fluff.” He likened the L.A. museum to “a European kitchen utensil whose ideal function you can’t quite figure out.”

Ma said he stopped obsessing over criticism long ago, for his own self-preservation. He argued that context is subjective.

“There’s another context that existed long before the city: the physical context,” he said. “The boxes of our cities have only happened in the last 100 years. Maybe we’re criticizing our cities by being different? Maybe we want to suggest a bigger scale of size and time?”

He said he’s also moved by a place’s cultural context — its traditions, its habits, its understanding of the future (“L.A. is about imagination,” he said). He responds to that through abstraction.

The Lucas Museum will contain sensual, organic elements, including curved timber walls, indoor plantings and an undulating, accessible green roof. But most of the vaulted lobby will be clad in smooth white plaster, maximizing its lightness and ethereality and creating the sense of entering a cloud. Visitors will take a tubular glass elevator to the upper-level exhibition spaces, ascending into the sky, as it were.

Ma leans into his approach with a quiet, easygoing style.

“I don’t know why artists need to talk so much. I think my work can speak for me,” he said, adding that staying quiet gives him the space he needs to think more deeply. It’s a vastly different approach from that of his fellow global starchitects, who ooze charisma and wield it as another tool.

“Ma expresses his thoughts with ideas and sketches,” said MAD associate partner Flora Lee, who has been with the firm for more than a decade. “We know how to work with that. That’s where the back-and-forth begins.”

New members of MAD usually flame out after the first few months or stay forever, joining the hardworking family and learning to intuit Ma’s needs and hammer out less sexy details such as ventilation systems. As the messiness spins around him, Ma is free to dream of new forms rooted in simpler times and the profundity of nature, intentionally divorced from reality.

“He’s super chill. Like really chill. One of the chillest people I’ve ever known. I sat 4 feet away from him for years and I barely heard him raise his voice,” Gillen said.

To maintain his enviable commercial success, Ma has shown a willingness to scrap what his clients see as inefficient elements when necessary.

For Gillen, Ma’s insistence on building his dreams, no matter how outlandish they might seem, is what he respects most.

“He’d rather build 10 masterpieces than 1,000 average projects,” Gillen said. “Every time the team understands it has a chance to do something great. To go there. To build monuments. You don’t often get that chance in architecture.”