In Pennsylvania, the Scranton native makes populist promises to help the middle class. 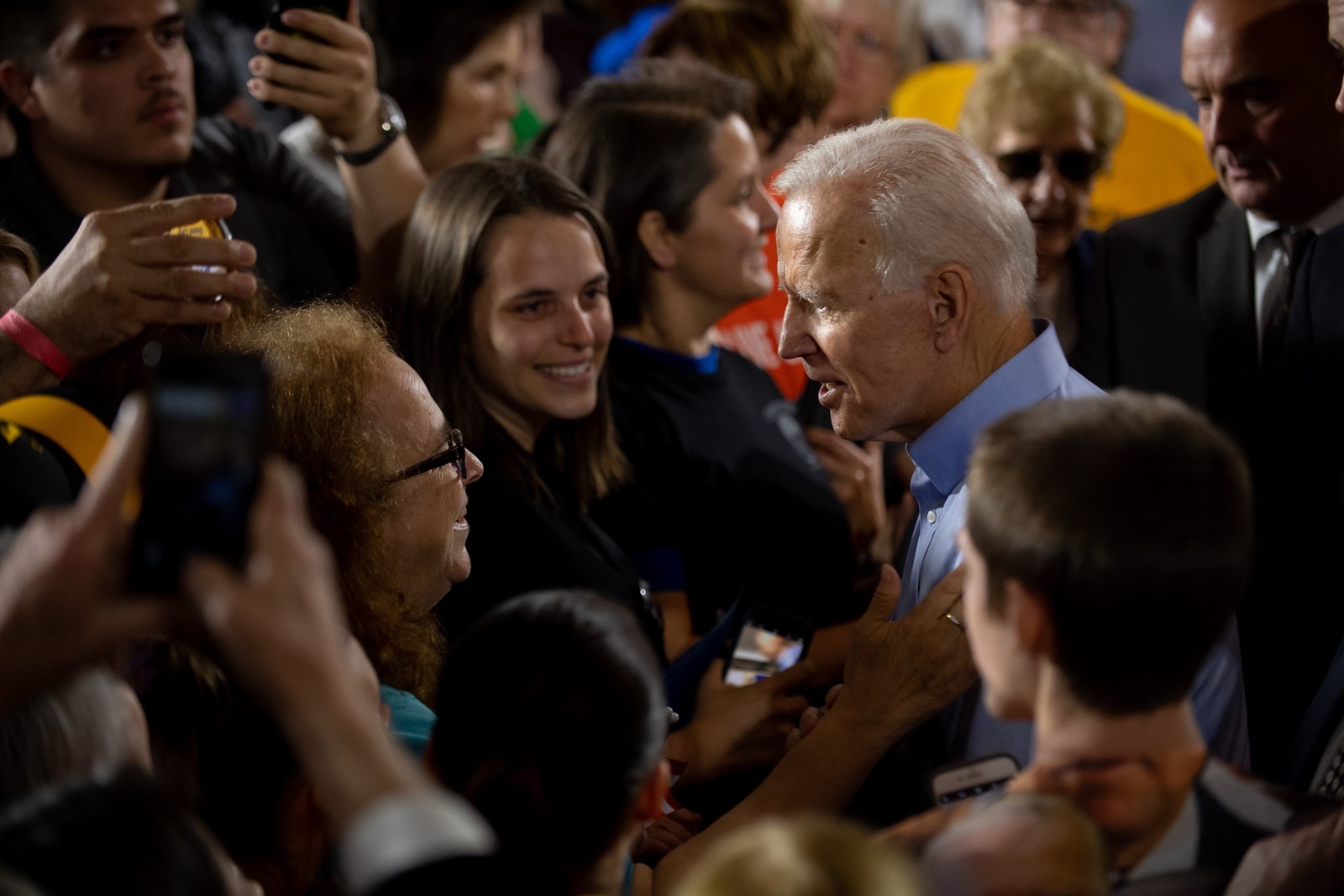 Former Vice President Joe Biden, jumping into the 2020 presidential race as the apparent front-runner, flashed his political calling card Monday with a kickoff rally at a Pennsylvania union hall that underscored his claim to be the candidate best equipped to win over blue-collar workers in crucial states that gave Donald Trump his victory in 2016.

“Quite frankly, if I’m going to beat Donald Trump in 2020, it’s going to happen here,” he told a chanting, cheering crowd at a packed Teamsters hall.

He kicked off his long-awaited campaign with populist promises to rebuild the middle class. As he did in last week’s announcement video, he largely ignored the vast field of Democratic primary rivals and took the fight straight to Trump.

The rally marked Biden’s fourth union-themed event in two months, as he has called on loyal labor leaders to vouch for his credentials as a friend of middle- and working-class Americans.

More than 600 people, including union firefighters, steelworkers and Teamsters, filled the room, according to a Biden aide, citing a fire department estimate.

The Scranton-born Biden is leaning hard into his Pennsylvania roots. Trump won the state in an upset by just 44,292 votes in 2016 and has hoped to win favor with the state’s beleaguered steel industry by slapping tariffs on imports. Biden argues to Democrats that he provides their strongest shot here and in two other crucial industrial states — Wisconsin and Michigan.

Trump tried to discredit Biden’s Monday event in advance, with a tweet about the strength of the Pennsylvania economy including “a now thriving Steel Industry (that was dead).”

A new national poll by Monmouth University suggests limits to how much the economy helps Trump. Only 12% of Americans in the poll said their family had benefited a great deal from recent growth in the economy; 41% say they have received some economic benefit. But 54% said they had not benefited much or at all.

“The middle class is hurting,” Biden said at the rally. “The stock market is roaring, but you don’t feel it.”

A key question, however, is whether Biden’s support among union leaders will translate into backing from rank-and-file workers. That is where Trump sees his political opportunity.

“The Dues Sucking firefighters leadership will always support Democrats, even though the membership wants me,” Trump tweeted after the firefighters union endorsed Biden on Monday.

Jon Vesco, a member of the steel workers union who attended Biden’s event, said he sees support for Trump among his co-workers.

“A lot of people I work with are Trump supporters,” Vesco said. “They are tired of the same old, same old when it comes to Democrats. They need to get back to focusing on people and jobs, not bashing Trump,” he said, referring to the party’s candidates.

The potential for a split between labor leaders and union members is part of the reason why many unions are being cautious about endorsing any candidate this far before the 2020 election. Many rushed to endorse Hillary Clinton in 2016, in some cases despite splits among their members.

Clinton ultimately defeated Trump among voters in union households, but by a margin that was just half of what President Obama racked up in his 2012 reelection, according to exit polls.

Biden hopes a campaign message aimed at working Americans will woo back some of the union workers who moved to Trump.

“This isn’t about a demographic,” said John Anzalone, a Democratic pollster who is advising Biden. “It is about a bigger vision: Everyone needs economic opportunity. Everyone needs the opportunity to succeed and get the benefits of hard work.”

Critics on the left have questioned Biden’s ties to corporate interests that have sometimes been at odds with workers. He took flak for holding his first high-dollar fundraiser at the home of a Comcast executive in Philadelphia last week. Progressives, including 2020 rival Sen. Elizabeth Warren of Massachusetts, have criticized his support, as a U.S. senator from Delaware, for legislation backed by home-state banking companies.

“Joe Biden was on the side of the credit card companies,” Warren said during a campaign swing through Iowa last week when a reporter asked about the 2005 bankruptcy bill she opposed as a Harvard University law professor because she believed it was too hard on financially strapped families. “Our disagreement is a matter of public record.”

Harold Schaitberger, president of the International Assn. of Firefighters, said in an interview that he worried if Democrats go with a candidate like Warren or Sen. Bernie Sanders of Vermont, they will move too far to the left to win back union members. He cited Warren’s support for broad student loan debt cancellation and Sanders’ support for restoring voting rights to felons in prison.

“Let me shoot straight with you, and this may not be popular in parts of the Democratic Party,” Schaitberger said. “We can’t have a nominee that is too far left.”

Biden outlined a policy agenda more moderate than some of his rivals. It included increasing the minimum wage to $15 an hour — a stand taken by most of the candidates — and allowing anyone who wants to do so to buy into Medicare. That would represent a less dramatic change than the “Medicare for all” plan pushed by Sanders, but goes far beyond the proposals that Democrats pursued during Obama’s two terms.

Biden’s rally won at least one convert from a Trump voter in attendance. Chuck Howenstein of Pittsburgh, 64, drew a contrast between the divisive tone of Trump’s rallies and the upbeat message of Biden’s.

“I really believe he’s a good man who will bring morality to this country,” said Howenstein, who sells fire protection equipment. “I saw what happened in the last three years. To me it was terrible.”