The killing fields for mountain lions 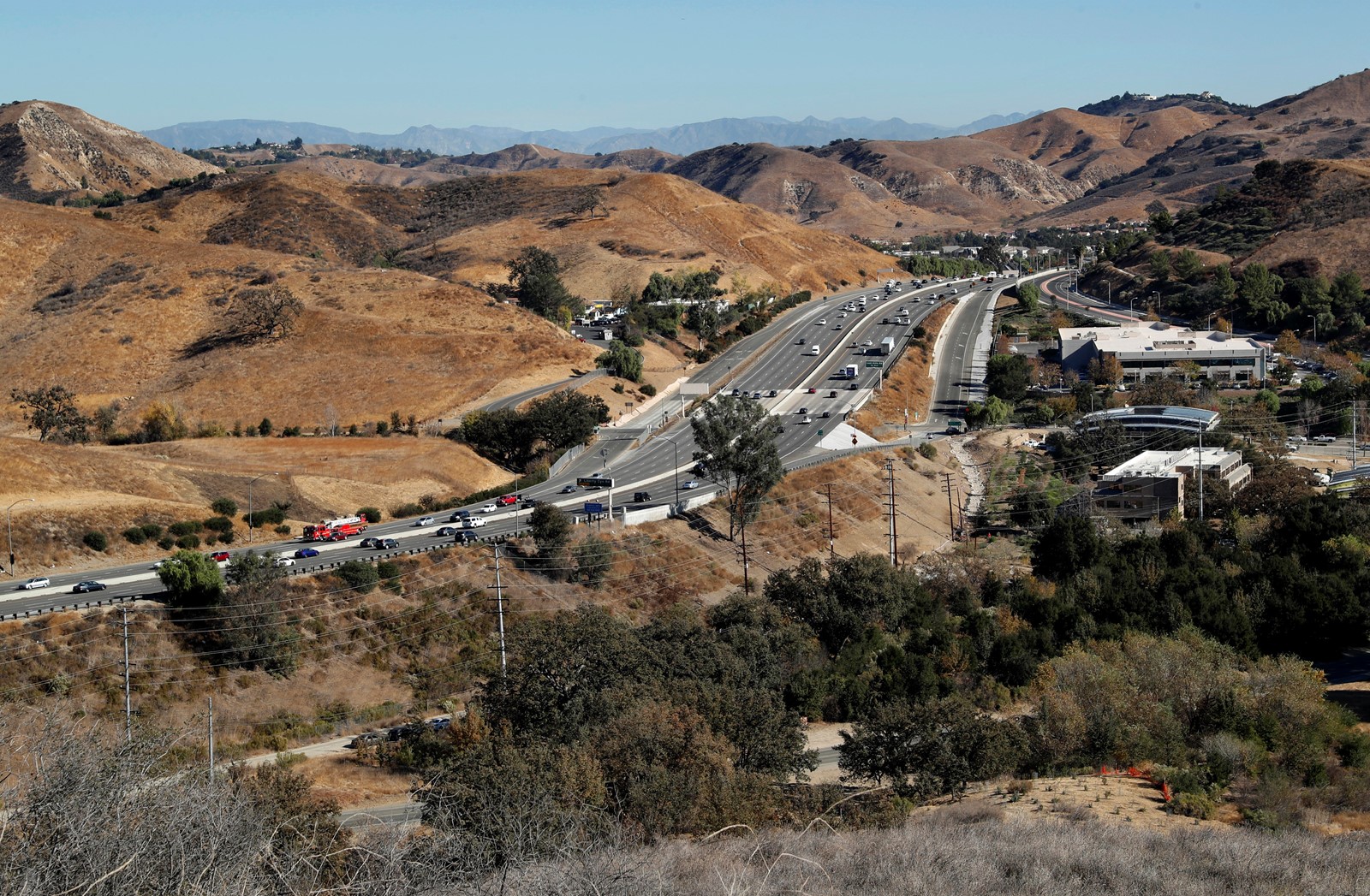 A VIEW of the 101 Freeway near the Liberty Canyon Road exit in Agoura Hills, the site of a proposed wildlife crossing that researchers say would allow mountain lions in search of mates to cross the roadway safely. (Mel Melcon Los Angeles Times) 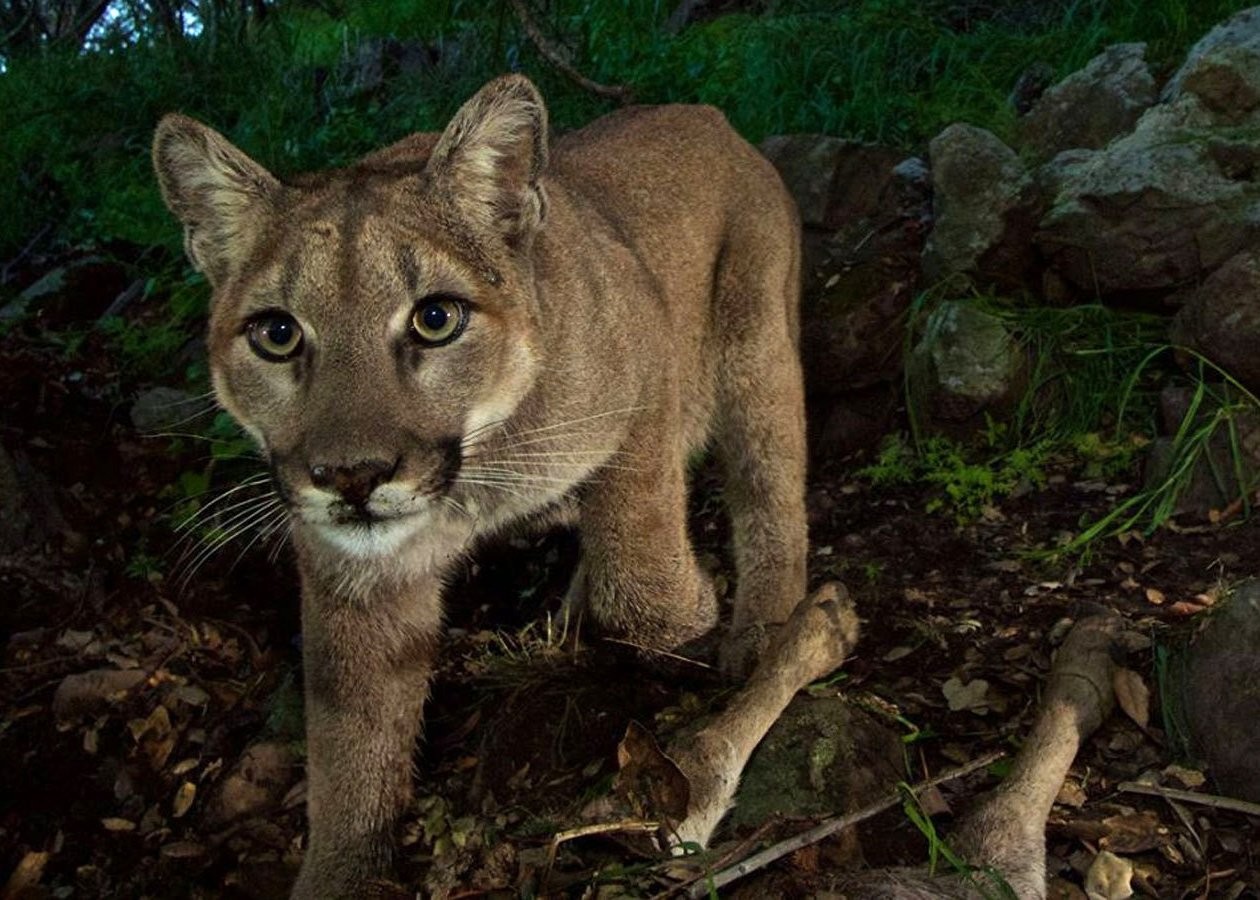 For mountain lions, however, those multilane speedways are concrete killing fields that divide animals into isolated genetic pools, researchers say.

Unable to surmount these near-impenetrable barriers, mountain lions and other wildlife are left to mate with their own offspring. That inbreeding can lead to sterility and other physical ailments that threaten the species’ continued survival in Southern California.

Restricted territory has also caused adult males to kill younger mountain lions, as happened to at least one lion between 2001 and 2003. Others have been poisoned by human-laid traps left for smaller animals.

Of particular concern to conservationists are the 101 Freeway, which prevents mountain lion populations in the Santa Monica Mountains south of the highway from mating with cats in the Santa Susana and Sierra Madre mountains to the north; and Interstate 15, which separates the Santa Ana and Palomar mountains.

Fortunately, a potential long-term solution is on the horizon.

An effort is already underway to fund construction of a wildlife crossing bridge over each highway — landscaped with native vegetation and with features such as sound walls, irrigation and fencing — to allow cats looking for mates to move back and forth freely.

According to a report by the National Park Service, UC Davis and the Nature Conservancy, experts have identified locations along both freeways that offer the best opportunity for wildlife crossings. One would connect undeveloped land on either side of the 101 in Agoura Hills, while the other would link the grassy slopes buttressing I-15 in Temecula.

In Agoura Hills, a crossing of the 101 would essentially allow the isolated community of 10 to 15 mountain lions living in the Santa Monica Mountains to access a huge swath of Southern California, including the Simi Hills, Santa Susana Mountains and Los Padres National Forest — what proponents call the “promised land” for pumas in this region.

Mountain lions are known to have successfully crossed the freeway only nine times in the last 16 years, while most attempts end in death for the animals, the National Park Service said.

To be sure, freeway barriers affect other species, such as bobcats and coyotes, as well. For mountain lions, however, the barrier effects of the 101, 405, 5 and 15 freeways are particularly severe. Genetic diversity for Santa Ana mountain lions is already lower than has been measured anywhere else in the West, and the Santa Monicas’ population is not far behind.

The island effect that the 101 creates in the Santa Monica Mountains can be illustrated through the story of P-12 — the first mountain lion recorded to successfully cross into those secluded hills since scientists began studying the population in 2002.

Scientists have recorded only eight other 101 crossings since P-12 arrived, and all of them were in the last three years, the National Park Service said.

The second crossing came in March 2015, when female P-33 scampered across the highway from south to north near Camarillo on the western end of the mountain range. P-33 was also an offspring of P-12.

The third crossing came weeks later, when that cat’s brother, P-32, also crossed in the same area. He was the first male to leave the Santa Monica Mountains since the study began. Although the siblings both crossed at locations at the far western end of the mountains near the Camarillo and Thousand Oaks border, their paths were different.

Researchers say the female puma, P-33, crossed the eight-lane freeway near Camarillo sometime between midnight and 2 a.m. on March 9, 2015. P-32 dashed across the freeway near Thousand Oaks early on April 3, 2015, then crossed Highway 23 near the Ronald Reagan Presidential Library and settled into a natural area in the Simi Hills.

The fourth crossing was documented in July 2017, when P-55 crossed the freeway from south to north near the Conejo Ridge Open Space. Just 2 ½ months later, P-55 returned to the mountains by crossing the freeway again near where it meets Highway 23, the park service said.

The sixth crossing was earlier this year and was far more surprising, officials said, because of the path the puma took.

Mountain lion P-64, a male, used a dark culvert the length of two football fields to cross under the freeway into the Santa Monica Mountains on March 1. It was only the third time since 2002 one of the animals is known to have crossed into the Santa Monica Mountains territory, and officials hope he will provide some much-needed genetic diversity for the population. P-64 has used the culvert at least four times, officials said.

But the culvert is so remote and fraught with other drawbacks that scientists can’t bank on animals using it regularly, experts said. It can be inundated when it rains and, because of its curved path, animals can’t see from one end to the other.

When mountain lions do successfully cross the freeway — either to the north or south — they are still surrounded by danger.

Though documentation on crossings of Interstate 15 in Riverside County is scant, mountain lions face the same risks there that they do north of Los Angeles.

In Agoura Hills, experts said the best location to set up a crossing would be just west of Liberty Canyon Road, where the Simi Hills stretch down to the northern edge of the Santa Monica Mountains with only the 101 Freeway between them.

Bobcats and coyotes are known to frequent the area, which is full of natural vegetation and seldom used by hikers, the report stated. Other areas have too many people, cars and artificial light or require too much rehabilitation to make them suited for wildlife.

Similar conditions helped experts choose the area along a 6-mile stretch of I-15 just south of Temecula Parkway in Riverside County for that habitat’s crossing. Earlier this year, the Nature Conservancy purchased 73 acres of land along the highway to facilitate a crossing.

The best site would be where the Santa Ana Mountains run up against the highway and are paralleled by the Palomar Mountain foothills on the other side, each hill rising 15 feet above the roadway, the park service report stated.

Genetic analyses of 146 sampled pumas showed only seven have crossed the freeway in that area in the last 15 years.

Scientists have documented only one crossing of I-15 by a mountain lion wearing a tracking collar, and that one was leaving the Santa Ana range, said Winston Vickers, a wildlife veterinarian at UC Davis. That animal then traveled south and was fatally shot.

Other mountain lion crossings have been deduced by mapping the DNA of the local population. Of the three that scientists say entered the Santa Ana Mountains from the east, one is dead, another is presumed dead and the third was able to breed, but half of its offspring have died, Vickers said.

“The high mortality rates in our study area mean that the odds are stacked against young males, even if they make it across the freeway,” he said in an email.

Inbreeding will eventually kill off the local population, said Cara Lacey of the Nature Conservancy, and, because mountain lions are among the top predators in the area, that would affect the entire food chain.

An existing bridge closer to the parkway has plenty of vegetation beneath it to accommodate a crossing below road level, but nearby developments and the possibility of encounters between lions and homeless people living under the bridge were considered too risky, experts said.

Now that the best locations have been identified, Lacey said, experts, engineers and public officials will begin studying what kind of wildlife crossings would be feasible.