Even before the rule change, the Senate is approving Trump picks at a record pace. 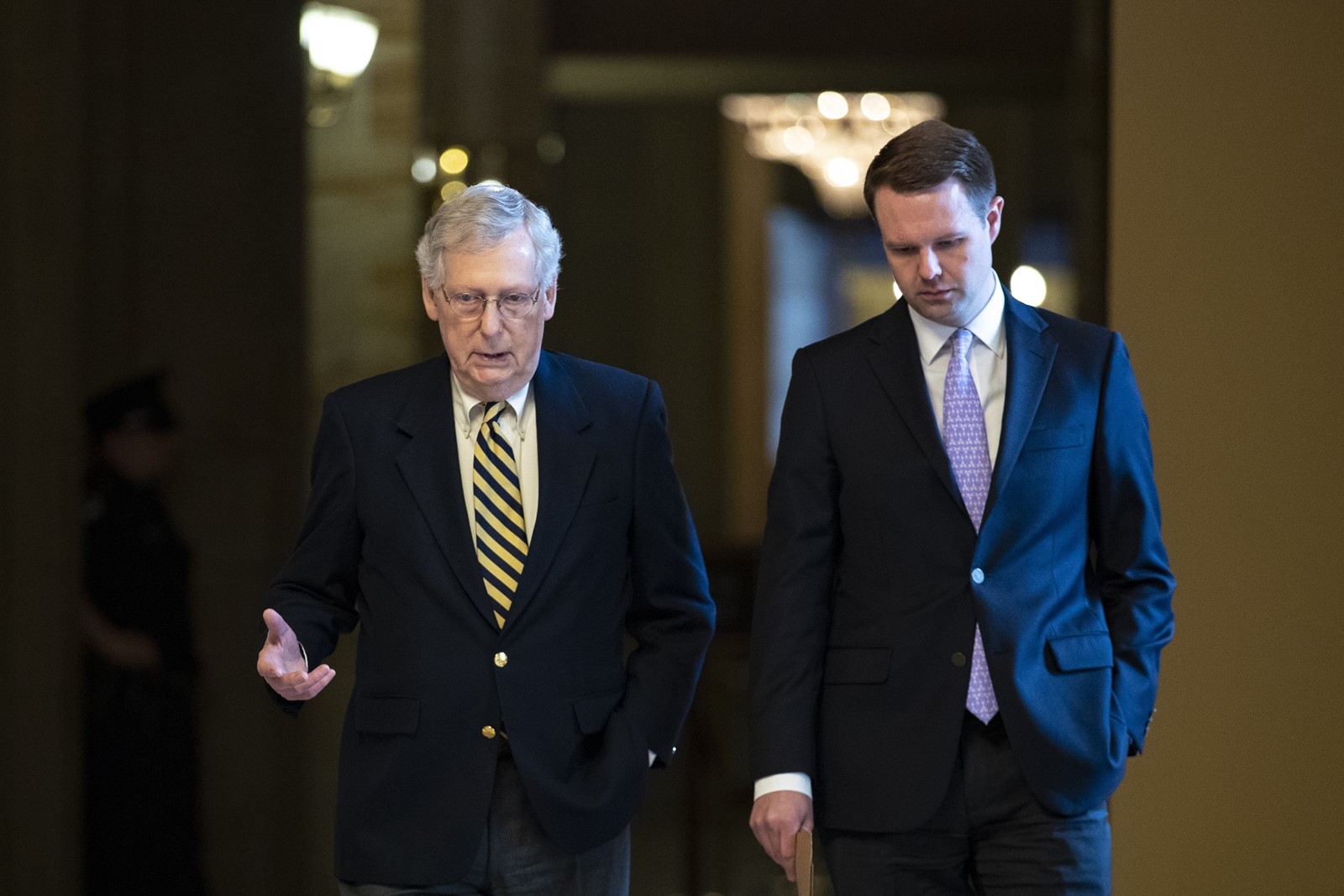 SENATE MAJORITY Leader Mitch McConnell (R-Ky.), left, with an aide, is on the verge of drastically reducing the amount of time the minority can debate a nominee for low-level judicial and administration posts. (Drew Angerer Getty Images)
PREVIOUS IMAGE

Senate Majority Leader Mitch McConnell (R-Ky.) is moving to change Senate rules to further speed up the confirmation of low-level judges and administration nominees, the latest example of scaling back long-standing Senate rules designed to give political power to the minority party.

Democrats tried to block the move in a vote Tuesday afternoon, but it failed, 51 to 48. McConnell is expected to make the rule change over their objections as soon as Wednesday.

Under the new plan, McConnell would eliminate 28 hours of debate that the minority can currently demand before the Senate votes on a nomination. The new rule — two hours of debate instead of 30 — would apply to district court judges and low-level administration appointees, such as sub-Cabinet posts and nominations to some federal boards.

The rules covering higher-profile nominations, such as Cabinet posts and Supreme Court and circuit court appointees, would remain in place.

Republicans blamed Democrats for slow-walking well-qualified Trump administration nominees for partisan purposes. McConnell pointed to seemingly noncontroversial nominees whose appointments have languished on the Senate calendar for months because Democrats demanded that the 30 hours be used. In the past, the 30-hour rule was frequently waived by the minority party as a courtesy, but such niceties have evaporated amid growing partisanship.

The White House and McConnell have made judicial appointments a priority, particularly now that Democrats control the House, making any legislative efforts exceedingly difficult. Because of the lifetime appointments of judges, the effort could dramatically move the direction of the courts to the right for generations, a legacy that would long outlast the Trump presidency.

Democrats, who oppose the change, say the record GOP appointments are proof that the rules don’t need to be changed.

“On the one hand, there’s too much obstruction. On the other, we have supported a record amount of judges,” said Senate Minority Leader Charles E. Schumer (D-N.Y.), in a mocking reference to the GOP argument. “The Senate needs to do its job. We should not be a conveyor belt for President Trump’s radical and unqualified judicial nominees.”

For nearly a decade, the minority — whether Republicans or Democrats — has increased the use of Senate procedural tools to block the majority party’s agenda. That has prompted the majority to change the rules.

In 2013, then-Senate Majority Leader Harry Reid, a Democrat, changed the threshold for advancing nominations of federal judicial nominees — except the Supreme Court — and executive-office appointments from 60 senators to50.

It was derided at the time by Republicans as a “nuclear option.” Four years later, McConnell used his own “nuclear option” to lower the threshold in the same way for Supreme Court nominations, clearing the path for Trump’s two appointments to the high court.

But other Senate precedents have gone by the wayside as well. In 2017, McConnell refused to consider the confirmation of Obama’s nominee to the Supreme Court, Merrick Garland. Republicans have also done away with the custom of allowing senators to , a process known as a “blue slip.”effectively block judicial appointments in their home states

Republicans say Democrats are taking advantage of the rule governing 30 hours of debate. They cite 128 instances during the first two years of the Trump administration in which Democrats have insisted on using the full amount of time. During the six presidencies before Trump, it was demanded only 24 times on nominations.

And they cited instances in which Democrats — after insisting on all 30 hours of debate time — then only debated for a few hours, or even minutes. The rest of the time, the Senate floor was largely empty, with no other work able to be done.

“This is not about actual debate,” said Sen. James Lankford (R-Okla.), citing one nomination that was debated for 4 minutes and 22 seconds. “This is about preventing President Trump from getting nominees by blocking up the floor.” He said that since Republicans would also demand 30 hours of debate the next time they are in the minority, it made sense to limit the time to prevent the Senate from becoming bogged down over low-level appointments.

The rule change Republicans are expected to pursue would be permanent unless a future Senate majority decided to undo the change. A somewhat similar rule change limiting debate time was adopted during Obama’s second term, but only on a temporary basis.