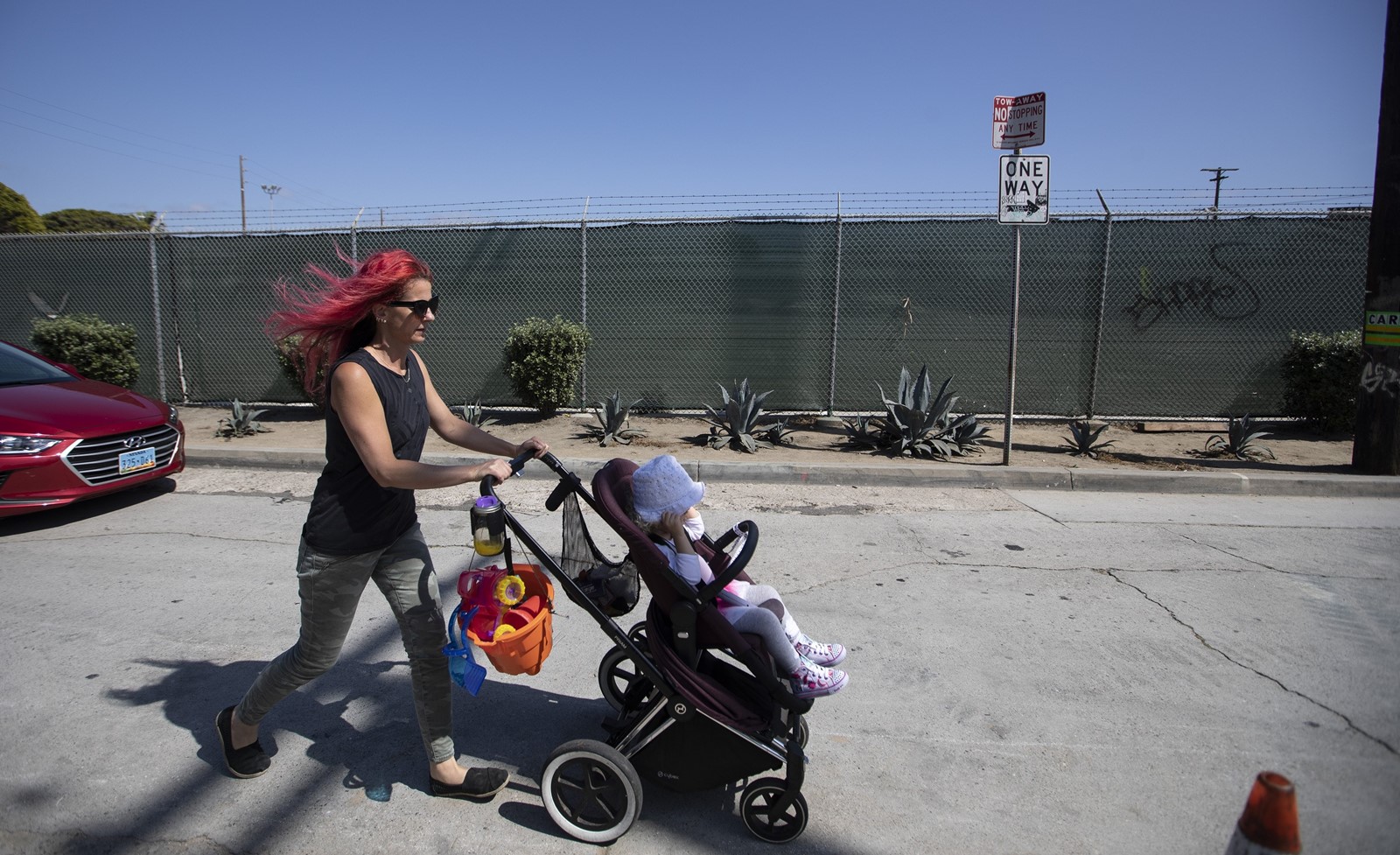 A WOMAN walks past a former Metro bus yard on Sunset Avenue in Venice, one of five public properties that the agency says could be used to provide services or temporary housing for L.A. County’s homeless population. (Photographs by Brian van der Brug Los Angeles Times) 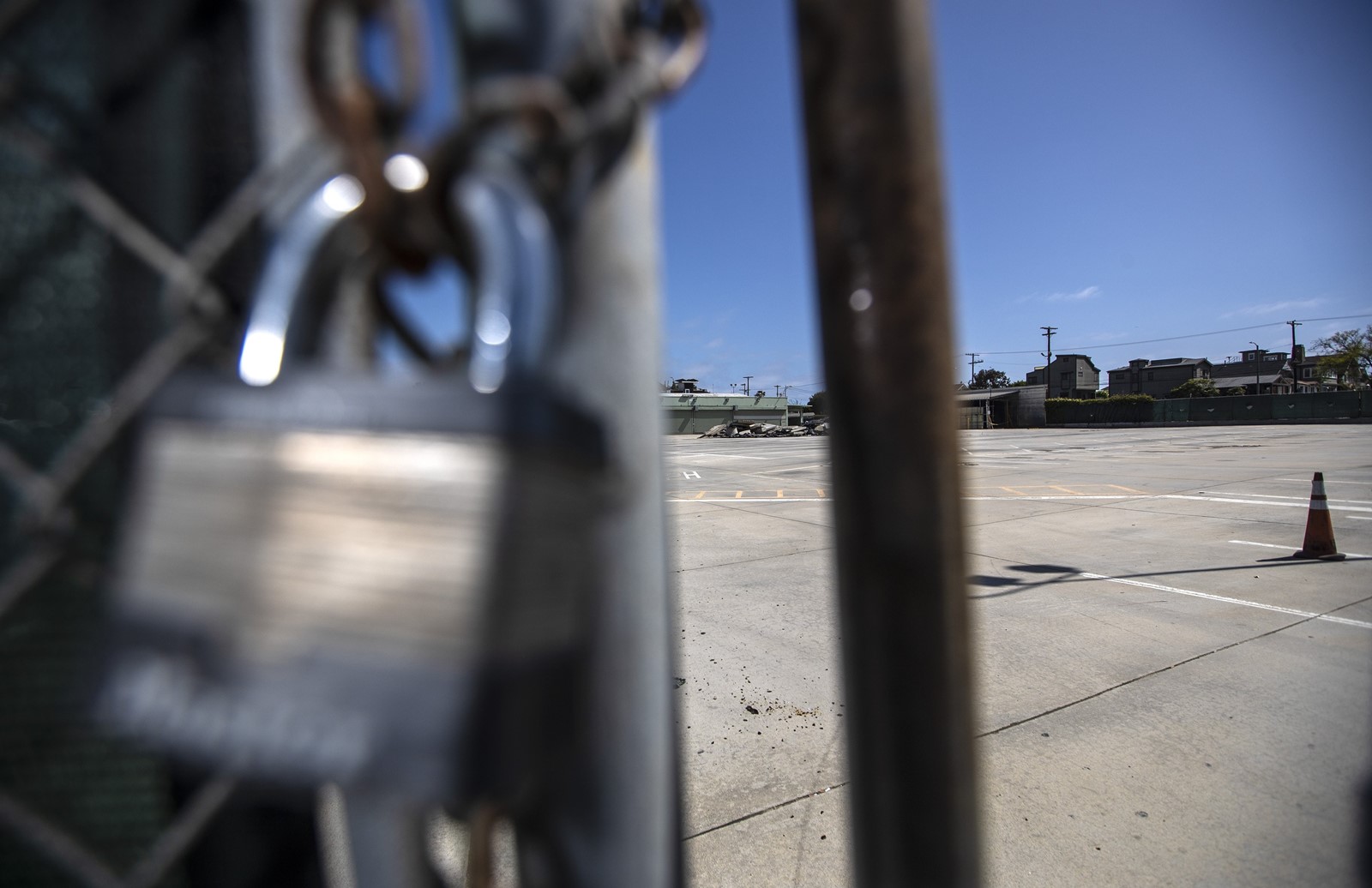 THE SITES, including the Venice lot, are vacant or underused, Metro officials said. They include three parking lots in the Valley and one in northeast L.A. ()
PREVIOUS IMAGE

Los Angeles County transportation officials have identified five properties, including parking lots in the San Fernando Valley and a former bus yard in Venice Beach, that could be used to provide services or temporary housing for Los Angeles County’s growing homeless population.

The properties, owned by the Metropolitan Transportation Authority, are either vacant or underused, officials said. It is unclear what services would be provided at the sites or how Metro would address public health, safety and liability concerns.

The list of proposed properties was assembled for Metro’s directors, who have pushed to expand the agency’s role in addressing the county’s homelessness crisis. Riders’ negative perceptions of safety and cleanliness on the system are leading reasons behind a decline in ridership, officials have said.

“This is an unprecedented crisis in Los Angeles, and we all — all levels of government, all neighborhoods — need to be treating this as if it were a natural disaster,” said Los Angeles City Councilman Mike Bonin, the chair of Metro’s customer experience committee, during a downtown meeting Thursday.

Similar efforts are underway in the city of Los Angeles, where Mayor Eric Garcetti is pursuing a $20-million initiative to build temporary homeless shelters on city-owned parking lots. The first proposed facility, a 65-bed shelter near Wilshire Boulevard and Vermont Avenue, has sparked an outcry from Koreatown residents.

Metro is a major county landowner, with a portfolio that includes dozens of train stations, parking lots and bus yards, as well as parcels adjacent to rail lines that were acquired during construction.

Commuters rarely fill the park-and-ride lots at the Orange Line busway stations in Van Nuys, Tarzana and Canoga Park, which would be prime candidates for homeless services, Metro said. The lots are adjacent to the Orange Line bike path, where Valley residents have frequently complained of homeless encampments.

A former bus yard in Venice Beach that closed in 2015 is also on the list. The 3.15-acre lot on Sunset Avenue is three blocks from the Pacific Ocean and a short walk from Abbot Kinney Boulevard, where homes sell for more than $3 million.

Metro closed the bus facility after fielding multiple offers from buyers who wanted to develop the site, but no deal is expected within a year and a half. The building that formerly housed the bus yard’s facilities would require some environmental remediation before people could work inside, Potts said.

The final site runs along San Fernando Road in northeast Los Angeles, sandwiched between the street and Metrolink tracks. A trucking company recently terminated its lease there for cab parking, freeing up 34,000 square feet that could be used for overnight parking for people living in cars and camper vans.

Metro’s directors took no steps Thursday to move forward with the homeless services plan, and they raised a number of questions about how Metro would provide and fund the programs. They also questioned how long services that are described as “temporary” could be provided.

The hope, Potts said, is that Metro will hire an outside service provider and draft a contract with a “firewall” that protects the agency from any public safety, security and liability concerns.

All five sites are in the city of Los Angeles, and elected officials and their constituents should be notified, said Los Angeles County Supervisor Sheila Kuehl. She also raised questions about how a safe overnight parking program would work.

Directors did not mention mobile showers or bathrooms, a service that Garcetti previously described as “very appropriate” for land near Metro stations. The vast majority of the rail and bus system has no bathroom access, because officials have traditionally said the facilities could be magnets for drug use and prostitution.

The city of L.A. operates a hygiene trailer with showers and laundry machines in a city-owned parking lot on skid row. Security officers and a maintenance crew monitor the facility, and people who come in can speak with a homeless outreach worker.

Currently, two teams of outreach workers walk through subway stations and ride trains on weekday mornings and afternoons, helping people find housing and other services. The expanded program would provide six more outreach teams, including workers who would ride the system on Saturdays, Sundays and overnight.

One team of outreach workers would be assigned exclusively to L.A.’s all-night buses, which carry so many sleeping homeless people that riders sometimes call them “rolling motels.”

The expansion, which still needs a full Metro board vote, would increase the annual cost of the program from $1.2 million to $4.2 million.