DWP to restrict watering outdoors to 2 days a week 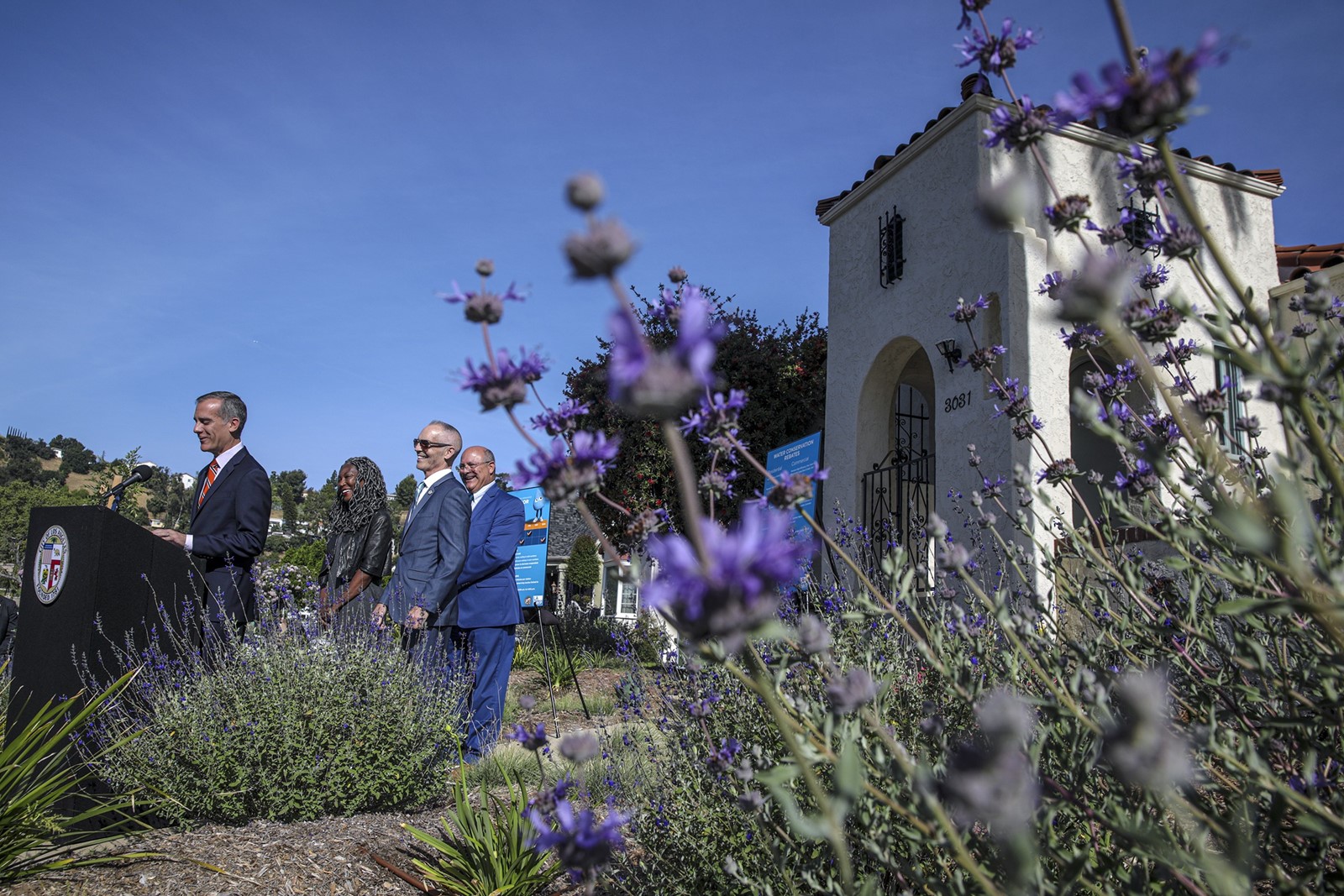 LOS ANGELES MAYOR Eric Garcetti announces the new watering rules in a drought-resistant residential garden. On whether the city can conserve water, he said: “We absolutely can, we should and we must.” (Irfan Khan Los Angeles Times)
PREVIOUS IMAGE

Nearly 4 million Angelenos will be reduced to two-day-a-week watering restrictions on June 1 under drought rules released by the Los Angeles Department of Water and Power on Tuesday.

The highly anticipated announcement came two weeks after the Metropolitan Water District of Southern California called for the strictest-ever water cuts in the region due to worsening drought conditions and reduced supplies from the California State Water Project. The MWD action left many to wonder just how the rules would be applied in L.A.

Unlike some water agencies affected by the district’s order for a 35% reduction, the DWP opted not to scale back to one-day-a-week watering rules. Instead, it will focus on staying at or below a monthly volumetric allocation, top officials said.

“We’ve elected to use the allotment number because we do still have our own aqueduct supplies, our own groundwater, and we have the ability to shift some of our demands on to the Colorado River where there’s not a restriction,” said Martin Adams, the DWP’s general manager and chief engineer. “We believe that going to two-day-a-week watering and getting people to really pay attention and ramp down their water use will keep us within the allotment that Met has offered us.”

The new Phase 3 rules will apply to everyone in the DWP’s coverage area — not just those that are dependent on State Water Project supplies, Adams said.

Under the rules, residents will be assigned two watering days a week based on their addresses — Monday and Friday for odd addresses and Thursday and Sunday for even ones — with watering capped at only eight minutes, or 15 minutes for sprinklers with water-conserving nozzles. No watering will be allowed between 9 a.m. and 4 p.m. regardless of the watering days.

Those who don’t comply with the new rules will receive a warning, followed by escalating fines for each subsequent violation, Adams said.

Though city officials said the plan would help conserve vital supplies without punishing the city’s residents, some water experts believed an even stronger response was warranted.

“It’s a fine way to go for now, but I would recommend not hesitating to go to one-day [watering] and seeing those plants die if necessary,” said Greg Pierce, co-director of the UCLA Water Resources Group.

The group’s other co-director, Madelyn Glickfeld, said the DWP should be “doing more to make permanent cuts in water use,” and suggested tax write-offs for the cost of replacing sprinklers with drip irrigation as one possibility.

“I am disappointed that the local water agencies, while they have drought plans in place, were not motivated to do something months ago, when we knew that this would be a devastating year,” she said.

Indeed, the outdoor watering plan released Tuesday is less restrictive than those of other nearby agencies — including Three Valleys Municipal Water District, which will move some areas to Phase 5 of its ordinance. Mayor Eric Garcetti told The Times that this was because Angelenos have already made progress conserving water. For example, DWP customers have been in Phase 2, which includes three-day-a-week watering rules, since 2009.

“If you just fixate on the watering days a week, it feels like less, but if you look comprehensively, DWP has consistently, is and will do more than most of those agencies collectively in all sorts of different places,” Garcetti said, noting that the city has also invested heavily in rebate programs for turf replacement and appliance upgrades to improve residents’ water efficiency.

The mayor also said he hopes to get away from the notion of “feast and famine” when it comes to water in L.A.

“I’m not going to ever back away from the urgency and focus, but I don’t think that means [we need] the stress and the nihilism of ‘L.A. can’t do this,’ ” he said. “We absolutely can, we should and we must.”

Some have already taken the message to heart. Glassell Park resident John Gegenhuber said he took advantage of the city’s rebate program to replace his grassy lawn with drought-tolerant landscaping last summer.

“Over the past several years, we started to become aware of this, and the principals involved and the water crisis,” he said, standing amid his drip-irrigated yard replete with blooming sage. “We’re shocked at how good it’s looking with basically a reduction in our water bill.”

Current offers include $3 per square foot of grass removed, as well as up to $500 for high-efficiency clothes washers and $250 for toilets, according to the DWP.

Garcetti’s message was more optimistic than the one delivered by MWD officials only weeks ago, when General Manager Adel Hagekhalil said that “we are seeing conditions unlike anything we have seen before,” and urged serious reductions in water use. He and other water officials said the cuts were necessary because the driest January, February and March on record had left California with meager snowpack and depleted reservoirs.

In a statement Tuesday, Hagekhalil said the DWP’s move “will help the region stretch our limited State Water Project supplies until the end of the year.”

“By agreeing to volumetric limits in the amount of Metropolitan water they receive, Los Angeles will produce the necessary water savings to help ensure we meet our overall conservation target for the region,” he said.

Previously, Hagekhalil said the goal was to reduce water use among State Water Project-dependent areas from about 125 gallons per person per day — including in residential, commercial and industrial sectors — to 80 gallons in order to avoid stricter cuts. If conditions don’t improve, he said, a full outdoor watering ban could come as soon as September, although the DWP and other agencies that opted for volumetric limits would not be compelled to follow suit.

DWP officials said their customers are already averaging about 112 gallons per person per day, less than half of that of some other nearby agencies. The combination of two-day-a-week watering across the entire service area, enhanced conservation efforts and other local supplies means they can cap residents at about 105 gallons per person per day and still stay within the MWD’s allotment.

“That number would be I think very successful in getting us through this drought,” Adams said.

The move to Phase 3 also triggers other measures, including a call for residents to use pool covers to decrease water loss from evaporation. Exceptions for drip irrigation and hand watering will remain in place.

The DWP will also ramp up patrols to look for people violating rules or wasting water. Adams said the number of patrollers has yet to be determined but will be “pervasive” in the city’s neighborhoods. However, he said, the plan is less about punishment and more about proactivity.

“You tell people how much water they use in a day and they’re shocked,” he said. “People generally have no concept of that, but once they know, people pay attention.... What it takes is continual messaging to customers to get people to realize that this is important, they need to make these changes, and those will result in real savings.”

Some experts remained skeptical about the public’s willingness to once again tighten use of water. Only hours after the DWP’s announcement, state officials said water use in March rose 19% despite the worsening drought.

“It just takes more water to keep the same amount of vegetation going,” said Jeffrey Mount, a senior fellow at the Public Policy Institute of California’s Water Policy Center. “That coupled with disaster fatigue ... and the fact that we have already conserved a lot of water over the past few decades makes it darn hard to get more conservation.”

But Mount also said about half of water use is outdoor irrigation for homes and businesses, so “there is room to give here without significant economic harm or disruptions to household use.”

“DWP and MWD are not in dire straits right now when I look at their available supplies. But if this drought goes on like this for another year or two, they most certainly will be,” he said, noting that the high temperatures and evaporative demand driving the drought are likely to stick around for a while. “So to the credit of these agencies, they are hedging against an uncertain future.”

Anselmo Collins, senior assistant general manager of the water system for the DWP, said the city is also looking ahead toward longer-term solutions, including encouraging the MWD to build a conveyance system that would allow the entire DWP service area to gain access to regional storage supplies.

Other long-term plans include enhanced capabilities for groundwater remediation, stormwater capture and water recycling, Collins said. One major initiative, Operation Next, aims to recycle as much as 100% of purified wastewater from the Hyperion Water Reclamation Plant by 2035.

The agency is also replacing aged infrastructure and has set a goal of replacing about 200,000 linear feet of pipe each year, he said. Though several major water main breaks during a previous drought were attributed to shifting watering rules in Los Angeles, Collins said that wasn’t the case, and the DWP’s water loss remains “one of the lowest in the entire country.”

The restrictions will now move to the City Council for final approval, officials said. Collins said he believed Angelenos could achieve the needed savings under the new rules.

“We use as much water today as we did 50 years ago with over a million people more in the city, and that’s because of conservation,” he said. “We believe that all the efforts that Angelenos have made throughout all these decades is the reason we can go to this phase — two days a week — and be able to meet the challenge.”