Surviving band mates talk about picking the collection’s 38 tracks and still dealing with the loss of their friend. 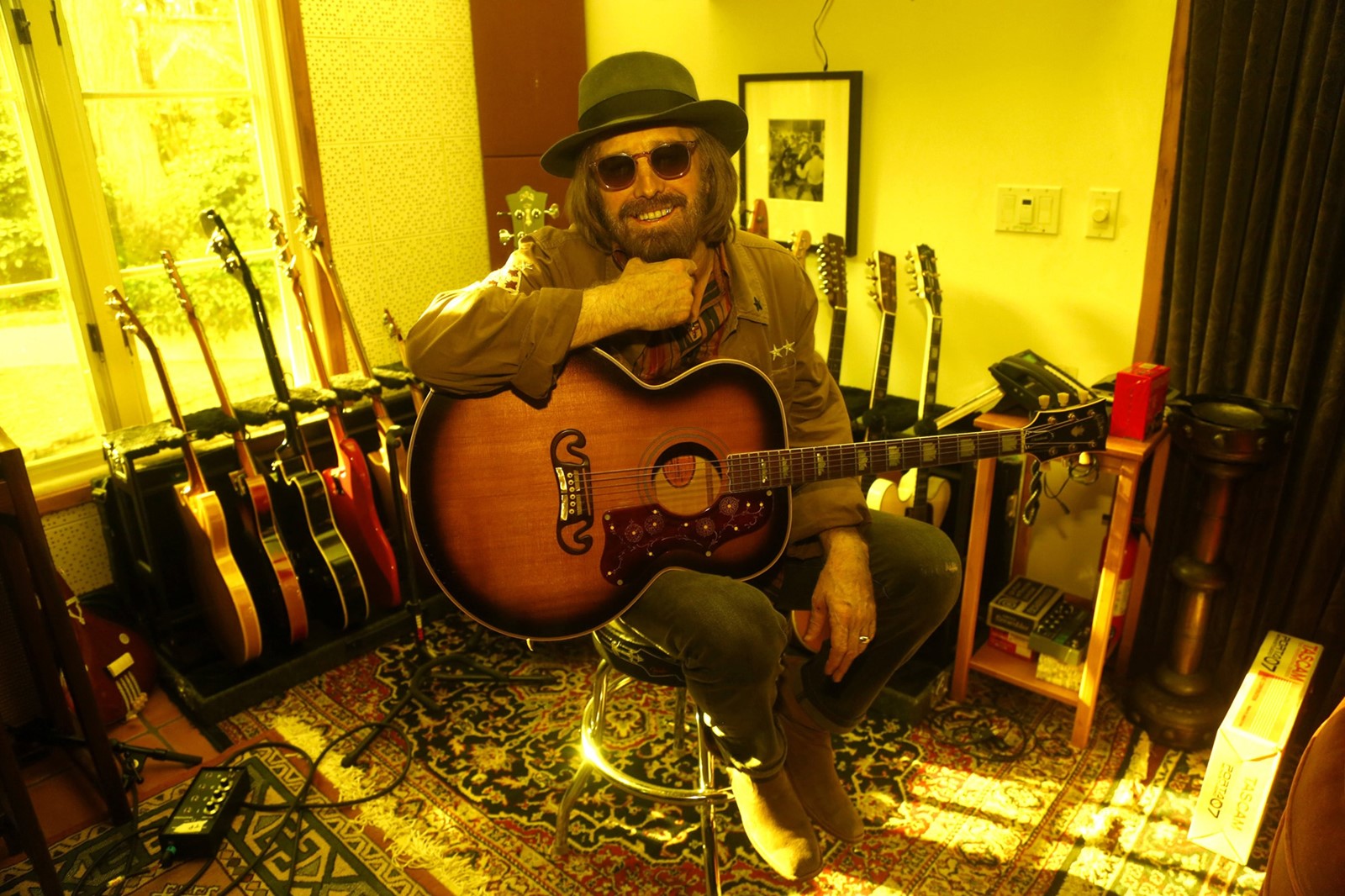 One aspect of Tom Petty’s music that comes into sharper focus in a comprehensive new collection is how consistently he kept the long view in mind.

That’s clear in any number of the 38 tracks chosen for “Tom Petty and the Heartbreakers: The Best of Everything — The Definitive Career Spanning Hits Collection 1976-2016,” which dropped March 1.

Petty’s big-picture take on music is perhaps most clearly laid out in “For Real,” a previously unreleased track that serves as the moving finale of the new set. It possesses the relatability and healthy dose of self-effacing humor that frequently defined his songwriting.

But this is not a confessional track from of a musician toward the end of a career. The potentially surprising realization for many is that it was recorded nearly 20 years ago, around the time Petty turned 50.

“Yeah, like ‘Why would I do this?’ ” lead guitarist Mike Campbell recalled in a recent interview. “I did it for real. I did it for me — not for the CEO. He always had that. That’s why he was such a great bandleader.

“I had mostly forgotten about it,” he said. “I had kind of a vague memory of it, but we found the tape and then it all came back to me.”

He added, “This song hopefully will give you a reason to buy stuff that you already have, so you have everything in one spot, plus a new song that you can only get on this record.”

The purity of purpose expressed in “For Real” is emblematic of the journey Petty traveled, most of it aided and abetted by the members of the Heartbreakers: Campbell, keyboardist Benmont Tench, bassists Ron Blair and Howie Epstein, drummers Stan Lynch and Steve Ferrone and longtime utility player Scott Thurs-ton.

That isn’t to say there weren’t real-world issues Petty and his pals had to reckon with.

“The truth is, there was showbiz in the Heartbreakers, sure,” Tench said in a separate interview. “It’s one way to connect with people. But he wasn’t full of [himself] or out there being jarring, not remotely. He was very much — even when I disagreed really strongly — I knew that he meant what he said.”

Tench wasn’t shy about questioning a decision Petty made.

“I’d be like, ‘What? You’ve got be kidding!’ But he was serious about all of it. He never said, ‘We better do this for the label or for the marketing.’ Whatever it was, first he had to be sure it makes sense for the band.”

Along with 26 Heartbreakers songs and eight solo tracks (which typically included contributions from one or more Heartbreakers), the new set also loops in four recordings from Mudcrutch, the Gainesville, Fla., band that preceded the Heartbreakers and that Petty reunited in 2008 for a second go-round.

Petty was joined in Mudcrutch by Campbell and Tench, plus guitarist-songwriter Tom Leadon and drummer Randall Marsh. Petty handled bass in that lineup. The core trio of Petty, Campbell and Tench came together again in Los Angeles in 1974 after Mudcrutch disbanded, giving birth to the Heartbreakers.

“That’s valid work,” Campbell said. “The songs are good, and Tom loved the first Mudcrutch. That was all his baby. I think those songs deserve to be on there.”

“The Best of Everything” was crafted roughly contiguously with “American Treasure,” by the same team: Campbell, Tench, Petty’s daughter Adria, his widow Dana and engineer Ryan Ulyate.

“The through line is obviously Tom,” Tench said. “Well, Tom and Mike. I don’t think Tom ever did anything without Mike.”

Tench said Adria Petty showed up for the brainstorming sessions with a stack of index cards, each with the title of a song on it. In democratic fashion, they tallied how many votes each song collected before determining which made the cut, and which didn’t.

Among those that did are slam-dunk songs including “Free Fallin’,” which opens the set, “American Girl,” “Breakdown,” “Refugee,” “The Waiting,” “Don’t Come Around Here No More,” “Wildflowers,” “Learning to Fly,” along with some deeper cuts such as “Saving Grace,” “Angel Dream (No. 2),” “Scare Easy,” “Square One” and “I Forgive It All” that help flesh out the full scope of Petty’s recorded legacy.

As for inevitable debate among fans as to individual favorites that aren’t on “The Best of Everything,” Campbell noted, “I think it’s a good problem to have.

“You can try to please as many people as possible, but you’re not going to please everyone,” he said. “It’s a compliment that there might be songs that some people feel like ‘I wish that one or this one was on there.’ That means they are real fans and they really love the music. I don’t know, maybe they’ll be a Part 3. I haven’t thought that far ahead yet.”

Indeed, Campbell and Tench said that in different ways, they’ve each to an extent staved off the grieving process over Petty’s death at 66 in 2017, just days after they completed a triumphant 40th-anniversary world tour.

“It’ll take some time — if I’ll ever get over it,” Campbell said. “But I’m getting better. I’m lucky to be busy and have lots of things to do to keep my mind off the sadness, and that’s been real helpful for me.”

A significant part of what’s kept him busy is his new role as co-lead guitarist in a revised lineup of Fleetwood Mac, in which he and former Crowded House/Split Enz member Neil Finn are handling the duties that formerly fell to Lindsay Buckingham.

As for the prospect of any all-star Tom Petty tribute concerts involving the Heartbreakers, don’t expect that to happen anytime soon.

“I can’t even wrap my mind around that,” Campbell said. “It’s just too emotional. I mean, with the band I’m touring with, we do a tribute every night. We do ‘Free Falling’ with some video pictures of Tom. … We tried to get into that, and it was just too soon, too emotional. I don’t know if I really need or want to do that. I think if other people want to do tribute concerts, that would be great. But right now, I’m not feeling it, honestly, just to get the Heartbreakers together without Tom.”

For Tench, the delay in grieving Petty’s death has more to do with the modus operandi they had following Heartbreakers tours. Typically it would be several weeks, even a few months, after a tour ended before Tench would hear from Petty about getting together again to rehearse, record or hang out. But now, 16 months down the line, the loss hits hard.

“I listened to it [the new collection’s title song] with my wife, and it was hard to hear,” Tench said. “The fact that he’s gone gets more real, it becomes more evident, every day. It’s pretty rough.

“I also listened to a bit of the vinyl today,” he said of the four-LP analog edition of the album also being released for streaming and as a two-CD set. “I’d forgotten we did cut some stuff that was kinda just me and him. I’ve said this before, but there is a sound two musicians make together and no other combination is going to make that sound. There’s a sound he and Mike and I made, and a sound we all made with the band. And I miss that sound, I miss making that sound with him.”

Looking back on their long journey together also gave Campbell renewed appreciation for what he, Petty, Tench and their band mates achieved. It’s a journey Petty himself poignantly summed up in a line from the album’s title track (represented on the new set with an alternate take that restores an additional verse originally omitted): “It’s over before you know it/It all goes by so fast/And the bad nights take forever/And the good nights don’t ever seem to last.”

“We were not really retro-looking people,” Campbell said. “When Tom was alive, we didn’t really look back and get nostalgic about what we’ve done. We used to keep moving forward. We were always watching for what’s the next project, what’s the next gig?

“Now that he has left us, we’re forced to look back and it’s amazing how much stuff we did, and how much of that holds up,” Campbell said. “I’m really proud of our legacy.”