What a virus means for climate 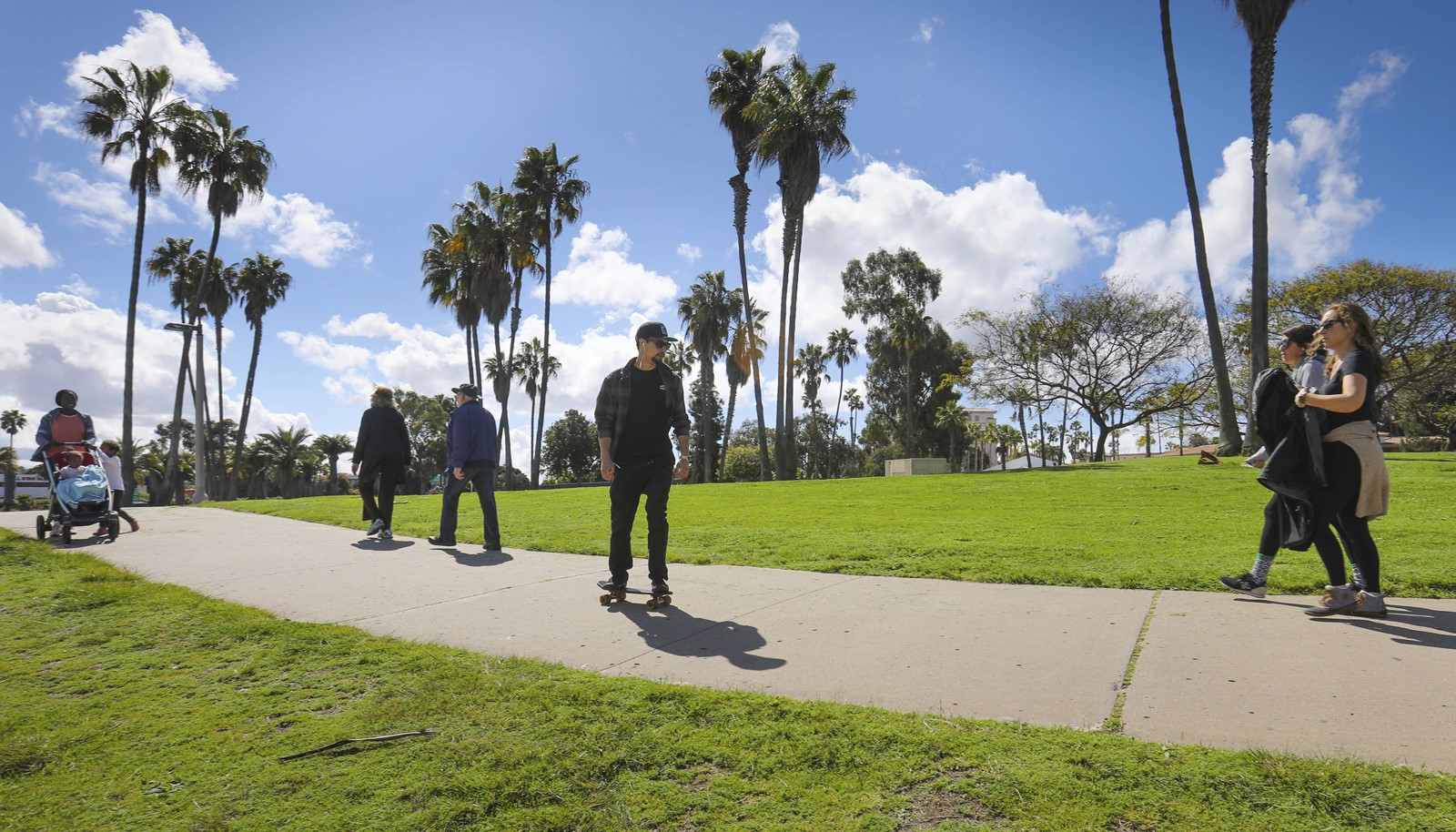 SOME EXPERTS wonder if the global mobilization to slow the COVID-19 pandemic might pave the way for more serious climate action. Above, visitors keep their distance this month at San Diego’s Mission Bay Park. (Howard Lipin San Diego Union-Tribune) 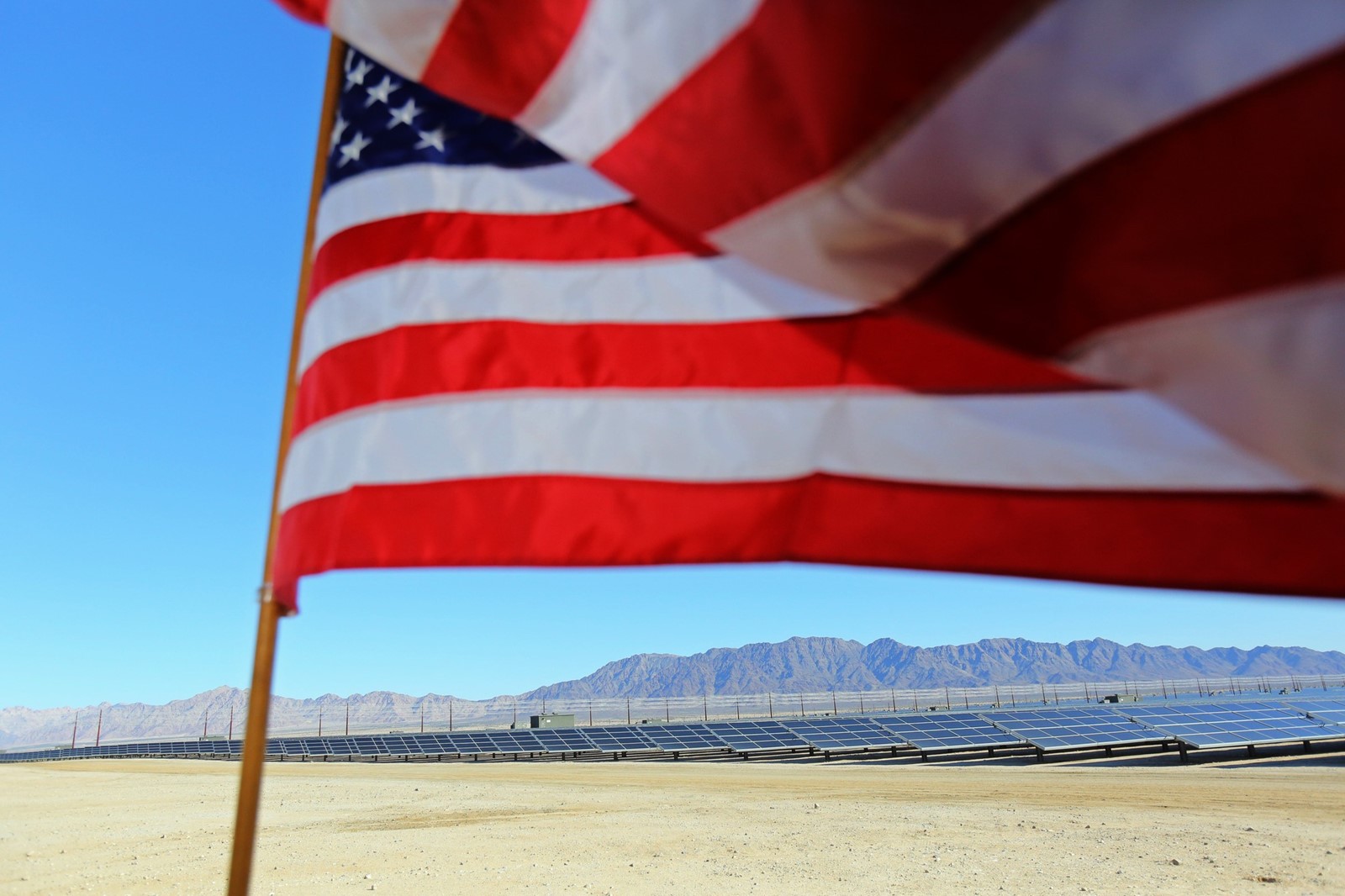 EFFORTS to reduce emissions — such as investing in solar power — wouldn’t be as disruptive to life as stay-at-home orders. Above, an American flag flutters at the Desert Sunlight solar farm in Desert Center, Calif. (Marcus Yam Los Angeles Times)
PREVIOUS IMAGE

Both the COVID-19 pandemic and climate change are global crises with the power to derail economies and kill millions of people.

Society has moved far more aggressively to address the novel coronavirus than it has the climate crisis. But some experts wonder whether the unprecedented global mobilization to slow the pandemic might help pave the way for more dramatic climate action.

Leah Stokes, a political scientist at UC Santa Barbara, pointed out that aggressive steps to reduce planet-warming emissions — such as investing in solar and wind power, switching to electric cars and requiring more efficient buildings — wouldn’t be nearly as disruptive to everyday life as the stay-at-home orders that have defined the coronavirus response.

“Dealing with the climate crisis is a decades-long transformation of our energy system,” Stokes said.

It’s also possible COVID-19 will change nothing for the climate fight because the calamitous effects of rising temperatures — such as worsening wildfires, deadlier heat waves and rising seas — are building over time rather than all at once.

We asked eight scientists, activists and other experts what a coronavirus-like response to climate change would look like, and what we can learn from the pandemic. Here’s what they said.

To Grubert, the ongoing pandemic “highlights how much we do actually need systemic responses to an emergency.”

Similarly, Grubert said, climate policies can’t just focus on reducing emissions. They must provide relief for those who are most vulnerable, such as coal workers who lose their jobs and low-income communities suffering the worst effects of pollution.

“We can’t really solve the climate crisis without having support for people’s healthcare, and support for people being able to survive wage-wise and job-wise,” she said. “And I think with the coronavirus response, we’re starting to see a lot of those same types of arguments being applied.”

Grubert has also been reading about public transit systems faced with massive budget shortfalls because ridership has cratered during the pandemic. She’s hopeful those types of headlines might spur greater support for government investment in light rail and buses, which can play a huge role in reducing planet-warming emissions by getting people out of their cars.

Skelton sees an important lesson for climate policy in the coronavirus outbreak: that confronting a crisis is far more difficult and expensive when it’s already on your doorstep.

The consequences of planet-warming emissions are already here, but the most devastating effects are yet to come. And whether it’s disease prevention or climate change, Skelton said, “the gross amount of money spent, and the disruption to the economy, is far less when you invest in prevention than in managed chaos and recovery.”

Climate change “will be as bad as coronavirus when we’re really feeling it. So let’s not go there,” he said.

Skelton thinks federal stimulus money to jump-start the economy after the pandemic subsides should include big investments in clean energy infrastructure, such as electric vehicle manufacturing, building retrofits, microgrids and projects to reduce emissions from industry. He also wants to see Congress set a federal clean electricity standard, possibly as high as 80% by 2050.

Skelton described himself as “very much a states’ rights advocate.” But the federal government’s true value, he said, is addressing emergencies and economic crises that can’t be solved by the states alone — such as climate change, or a global pandemic.

Stokes pointed out a striking contrast between the coronavirus and climate change.

To prevent the spread of COVID-19, young people around the world are staying at home, in large part to protect their parents’ and grandparents’ generations. With climate change, it’s older generations who are being asked to protect the planet for their children and grandchildren by making smaller lifestyle changes, such as driving less or eating less meat.

“I hope we could have this sort of inter-generational solidarity on the climate crisis,” Stokes said. Lifestyle changes alone won’t solve the climate crisis, and passing laws to reduce emissions will still be tough as long as the fossil-fuel industry exerts political influence, Stokes said. But the coronavirus crisis might “wake people up” to the importance of listening to scientists, and to the value of well-staffed, well-funded government agencies, she said.

She also noted that many critics have been quick to dismiss the multitrillion-dollar climate plans proposed by Democratic presidential candidates. But now Congress and President Trump have passed $2 trillion in federal spending as part of a coronavirus relief package.

“It suddenly becomes really questionable why there’s never any money to deal with this [climate] crisis,” Stokes said.

Meyaard-Schaap believes the coronavirus could have tangible and intangible ripple effects for climate.

On the tangible side, when the federal government sends $1,200 checks to individual Americans — a key piece of the relief package being debated by Congress — that might help build political support for a carbon tax and dividend. It’s a proposal to tax companies that emit planet-warming carbon pollution, then return the proceeds to households.

“Do you want to get that money in a more sustainable way? Let’s tax carbon, and cut everyone a check,” Meyaard-Schaap said.

On the intangible side, the pandemic might help people better understand the dangers posed by climate change. Scientists say a warmer planet is more conducive to the insects that spread diseases such as malaria and Zika. A hotter planet with worse air quality from increased smog formation and larger wildfires could also keep people indoors, as the coronavirus has.

COVID-19 “could make each of us more afraid, more cynical, less trusting in government,” and thus less willing to come together on climate, Meyaard-Schaap said. But he’s hopeful the pandemic will instead offer something else: “an opportunity for all of us to be inspired by each other, and to be chastened by our own call to responsibility.”

As chief scientist for a Paris-based multinational energy company, Webber is in the thick of the global coronavirus response. Like many utilities, Engie is implementing contingency plans to keep power plants running, and trying to figure out how it can use its emergency response and infrastructure expertise to help hospitals and governments deal with the outbreak.

For Webber, who is also an engineering professor at the University of Texas, Austin, there are two main lessons for climate change.

The first is the importance of listening to scientists, who have been warning for years about the risk of a global pandemic in much the same way they’ve been sounding alarm bells about climate. The second is the need to act early on those warnings. Webber pointed to the success of early, aggressive responses to COVID-19 in countries such as Singapore and South Korea. The virus has spread more quickly and infected more people in countries that were slower to respond, such as the United States.

“This feels like climate change to me, where every year we wait to take action on climate change means we have to hustle even harder,” Webber said. “And unfortunately people are going to die.”

The Sunrise Movement is the youth-led activist group behind the Green New Deal, a sweeping set of proposals that would slash planet-warming emissions while also guaranteeing a living-wage job and high-quality healthcare for every American.

To Jimenez, the fallout from the coronavirus — including widespread layoffs across industries such as food service and hospitality, and the fact that many Americans fear they won’t be able to afford treatment if they get sick — exposes the “fault lines” in America’s social safety net. Those are the fault lines the Green New Deal seeks to address, she said.

The country’s post-pandemic economic recovery plan “has to be one that’s about creating good jobs that are tied to meaningful work,” Jimenez said. “The Green New Deal is the only plan on the table that is looking at the economy and understanding how critical it is to rebuild it, and make it resistant to these crisis-level shocks.”

“We can model and demand a world where we come together across lines of generation and race and class to understand that we deserve a better world where everyone is taken care of,” she said.

Powell runs a clean energy advocacy group founded by Jay Faison, a conservative mega-donor who has been trying for years to get Republican politicians to take climate change seriously.

For Powell, the COVID-19 pandemic hammers home the importance of reliable, affordable energy supplies. He noted that power companies are going to “heroic lengths” to keep the lights on, making it possible for society to keep functioning amid the crisis.

Keeping energy reliable and affordable even as economies transition away from fossil fuels will require more than just solar farms and wind turbines, which can go a long way toward reducing emissions but are still limited by the on-again, off-again nature of sun and wind.

ClearPath supports government investment in technologies that might drive deeper emissions cuts, such as enhanced geothermal, advanced nuclear, pumped-storage hydropower and carbon capture from fossil fueled generators. Powell foresees an opportunity to bolster those kinds of technologies through the economic stimulus packages that will almost certainly be needed even after the pandemic subsides.

“We actually have a daunting but also exciting opportunity ahead of us this century, which is figuring out how to get everybody linked up to affordable, reliable electricity, and figure out how to do it clean,” he said.

Orford wrote a blog post for the London Review of Books arguing that efforts to rein in the novel coronavirus have “led to a significant shift in the way individuals, institutions and politicians discuss our responsibility to protect vulnerable groups.”

“States that for decades had been committed to neoliberal thinking have slowly begun to embrace such radically old-fashioned ideas as planning for the future, relying on scientific expertise, or calling on their constituents to make sacrifices,” she wrote.

In an interview, Orford explained that international law has long been shaped by the “rational choice” paradigm that dominates U.S. legal thinking. She described that way of thinking as follows: “You can’t ask people to make any sacrifice of liberty or property for the collective — and even if you did ask them, they wouldn’t do it.” Nations, too, will act only in their own self-interest, “even when faced with destruction of the planet.”

Now the COVID-19 pandemic is putting those ideas to the test. And Orford suspects there’s no going back.

“We can’t un-live this,” she said. “We now know you can ask people to radically do something we wouldn’t have thought possible, and we can do that with good humor. So why can’t we do that for the environment?”