It behooves angora goats, mini-donkeys and a llama to tend to a stubborn O.C. slope. 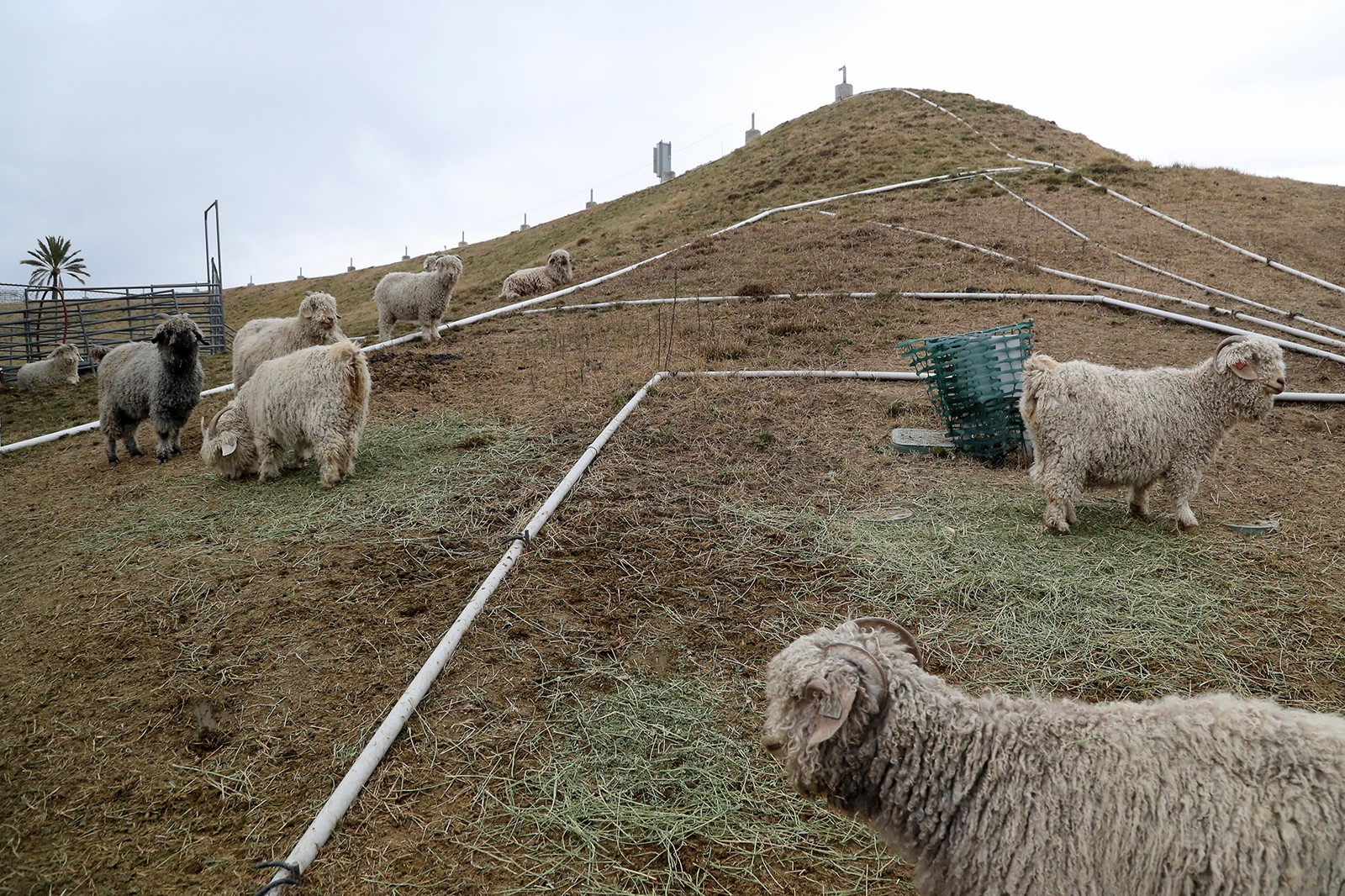 Never send in a man to do a goat’s job. That valuable lesson was demonstrated recently at the Orange County fairgrounds in Costa Mesa, where a herd of caprine helpers moved in to alleviate a massive hillside headache.

A steep 2-acre berm surrounding the Pacific Amphitheatre, built years ago and modified in 2015 to improve acoustics for concerts, was presenting a predicament as employees struggled to maintain its stubborn surfaces.

Landscape supervisor Barbara Gregerson said a team of gardeners came three or four times a year to whack the slope’s abundant weeds. They had to strap themselves into harnesses attached to a guy line at the top to keep themselves from falling and charged $4,000 to $5,000 per visit.

“It’s so steep you can’t get machinery up there,” Gregerson said. “If it were flat, piece of cake, but that’s almost a 2-to-1 slope.”

To make matters worse, poor soil quality made it impossible for anything other than patchy grass and weeds to grow on the berm. After endless efforts to hydroseed came to naught, experts advised Gregerson to douse the entire 80,000-acre area with a weed killer.

The conundrum continued until earlier this year, when Gregerson saw the 2018 documentary “The Biggest Little Farm.” The film follows a couple who moved from L.A. to the country and transformed an arid patch of land into a biodiverse habitat by using, in part, grazing critters to till, aerate and fertilize otherwise dead soil.

“That’s when it kind of clicked and I thought, ‘Oh, yeah, I could do this instead,’ ” Gregerson said.

She pitched the idea in a Sept. 24 meeting of the O.C. Fair & Event Center Board, explaining that annual costs in a four-year pilot program would be about $21,000 to $23,000, not too much more than the harnessed landscapers. But unlike the gardeners, the goats would be giving something back.

“This is not only educational, but the expansion of our education programming is very practical and a whole lot of fun,” Chief Operating Officer Ken Karns said at the meeting. “It really doesn’t look to be an additional incremental cost to what we were doing in the past. We’re changing four quarters for a dollar but with a whole lot more.”

The fairgrounds worked out a deal with Northern California goat farmer Allen Mesick, owner of Eureka Mohair Farm and frequenter of O.C. Fair livestock competitions, to “baby-sit” a team of 18 angora goats from October to January and again from March to May. In exchange, the goats would get shelter, supplemental food, veterinary care — and lots and lots of grass.

Today, the herd casually mills about the berm, untroubled by the steep terrain, and munches with abandon. But in the process, Gregerson said, the animals are saving the soil.

“Their hooves will help break it up — not a lot, but it’s going to really help roughen up the surface,” she said. “Then, their poop will help get nutrients into the soil. It’s their poop that we’re after.”

Because goats left unattended overnight would be too sweet a temptation for the coyotes occasionally spotted on the fairgrounds, two guard donkeys have been thrown into the mix.

Mini-donkeys Rosie and Charlotte roam among the goats, eating the abundant grass and hay in lieu of payment. Known to bray loudly at the sign of a threat, the equines are essentially like car alarms designed to scare off predators.

Gregerson and her associates last week welcomed Knitty, a 13-year-old llama whose gentle, long-lashed stare might fool you. But it turns out that llamas, unlike mini-donkeys, are capable of doing much more than crying wolf.

“A llama will be a true guard,” Gregerson said, adding that the four-legged creatures are exceptional at stomping on predators. “If a coyote would come in for an attack, a llama would attack back — the llama will protect its herd.”

The hope is the team’s seasonal work will restore the berm’s soil resiliency, allowing staff to hydroseed the area, first with a goat-friendly pasture mix and, eventually, as conditions improve further, with a wildflower mix that will draw pollinators.

“I’m hoping we’ll have what looks like a meadow. Then, we could easily turn this into a pollinator garden, and it could be amazing,” Gregerson said.