Volunteers are barred from detention center unless they sign a confidentiality form. 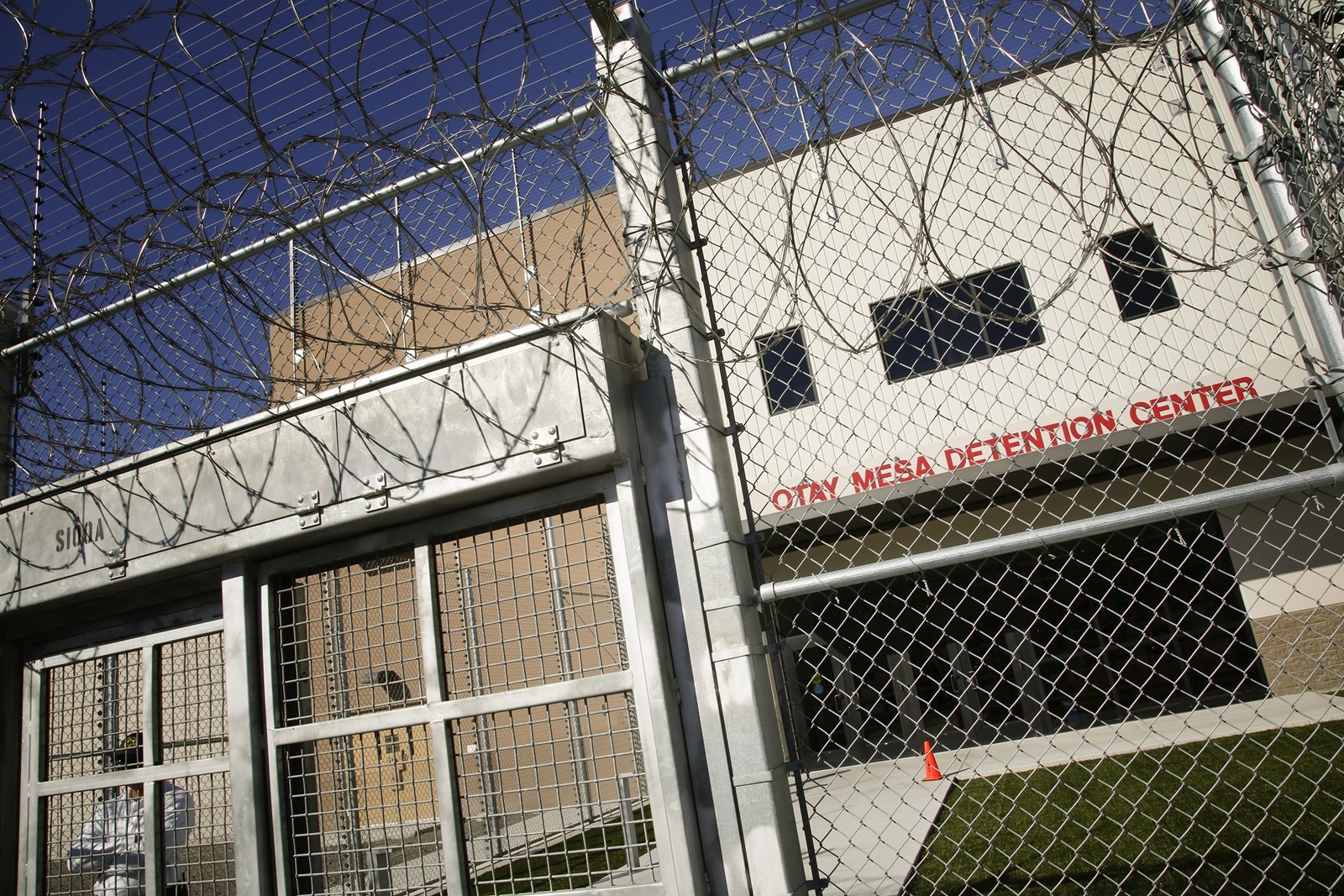 THE MAIN entrance to Otay Mesa Detention Center in San Diego. Since 2012, volunteers with Souls Offering Loving and Compassionate Ears have made more than 1,450 visits to at least 800 immigrants at the facility. (Nelvin C. Cepeda San Diego Union-Tribune)
PREVIOUS IMAGE

Immigration officials have stopped allowing a volunteer group to visit people at Otay Mesa Detention Center unless its members agreed not to talk with the media or other groups about conditions inside.

Immigration and Customs Enforcement said members of Souls Offering Loving and Compassionate Ears must sign the Volunteer Code of Ethics to be in compliance with the agency’s detention standards. The group so far has refused, arguing that the standards don’t require them to sign away their 1st Amendment rights in order to visit detainees.

Since 2012, SOLACE volunteers have made more than 1,450 visits to at least 800 immigrants at Otay Mesa. They try to give detainees who don’t have anyone to visit them a feeling of humanity, emotional support and hope.

“Without SOLACE, people who are detained at Otay have very little way to communicate with the outside world,” said Angela Fujii, who coordinates the program through the First Unitarian Universalist Church. “It’s a very vulnerable population that we know is now suffering and being neglected.”

The new requirement took volunteers by surprise. They said they thought they had a good relationship with ICE and had been told the agency appreciated their work.

At recent meetings, volunteers speculated that either the political climate or critical media coverage of conditions in detention facilities may have led to the change, but they could not think of a specific report that might have led to the restrictive language.

The confidentiality sections of the new code require volunteers to agree not to share information they acquire without written permission from the warden.

The volunteers worry that if a detainee were to tell them about abuse at the facility, they wouldn’t be able to speak up. They also took issue with a part of the form that says they “represent” CoreCivic, the for-profit company that owns and operates Otay Mesa.

“It seems like we’re being put in a straitjacket,” said volunteer Kathy Smith of Scripps Ranch.

ICE spokeswoman Lauren Mack said the change came from an “internal pre-audit” of volunteer programs that found SOLACE was not in compliance with the Performance-Based National Detention Standards, which is what the agency uses for its facilities.

“Each volunteer must go through a facility orientation and agree to applicable facility rules and procedures,” Mack said. “Volunteer applicants are required to complete the code of ethics package and required dress code.”

SOLACE volunteers hadn’t signed the form but had submitted information, including Social Security numbers and photo IDs, for background checks when they joined the program. The detention standards do not require the facility rules to include confidentiality clauses in CoreCivic’s volunteer form.

To David Loy, legal director of the American Civil Liberties Union in San Diego, the restrictions in the code are unconscionable.

“I don’t say that kind of thing lightly,” Loy said. “This is an absolutely unconstitutional attempt to stifle speech and evade accountability.”

“It gave me hope to be free again,” said Yousra, who preferred not to give her last name because she’s still in fear of the country she fled. “They are still supporting me and being by my side to stay strong and keep on fighting.”

Sylvester Owino, who came to the U.S. from Kenya and now has his own business selling food at farmers markets, spent more than nine years in detention while his case was being appealed.

“It’s a blow to the detainees,” Owino said of the program’s suspension. “They have nobody to talk to, nobody to go to.”

He recalled the changes he felt when he started getting visits from SOLACE volunteers. “In detention, they make us feel like we’re nothing,” Owino said.

This isn’t the first time ICE has suspended the San Diego program over a refusal to sign forms that had confidentiality clauses.

In 2013, after volunteers raised concerns about allegations of sexual abuse at Otay Mesa, ICE introduced a similar form and temporarily suspended SOLACE. After the media got involved, volunteers were allowed to continue without signing the form.

“It seeks to silence critics and prohibit the public from learning important information about treatment in detention,” said Fialho, whose group released a report in July documenting more than 800 complaints of hate-related abuse in immigration detention, including at Otay Mesa.

This week, SOLACE volunteers began meeting with staffers at congressional offices around San Diego to ask for help.

“The people we tend to see are the people who have suffered incredibly,” Gelb told one office’s staff. “It’s not for us that we want it reinstated. This is a service for people with nothing.”