Vulnerable in the House, party focuses on firing up base and gaining in Senate 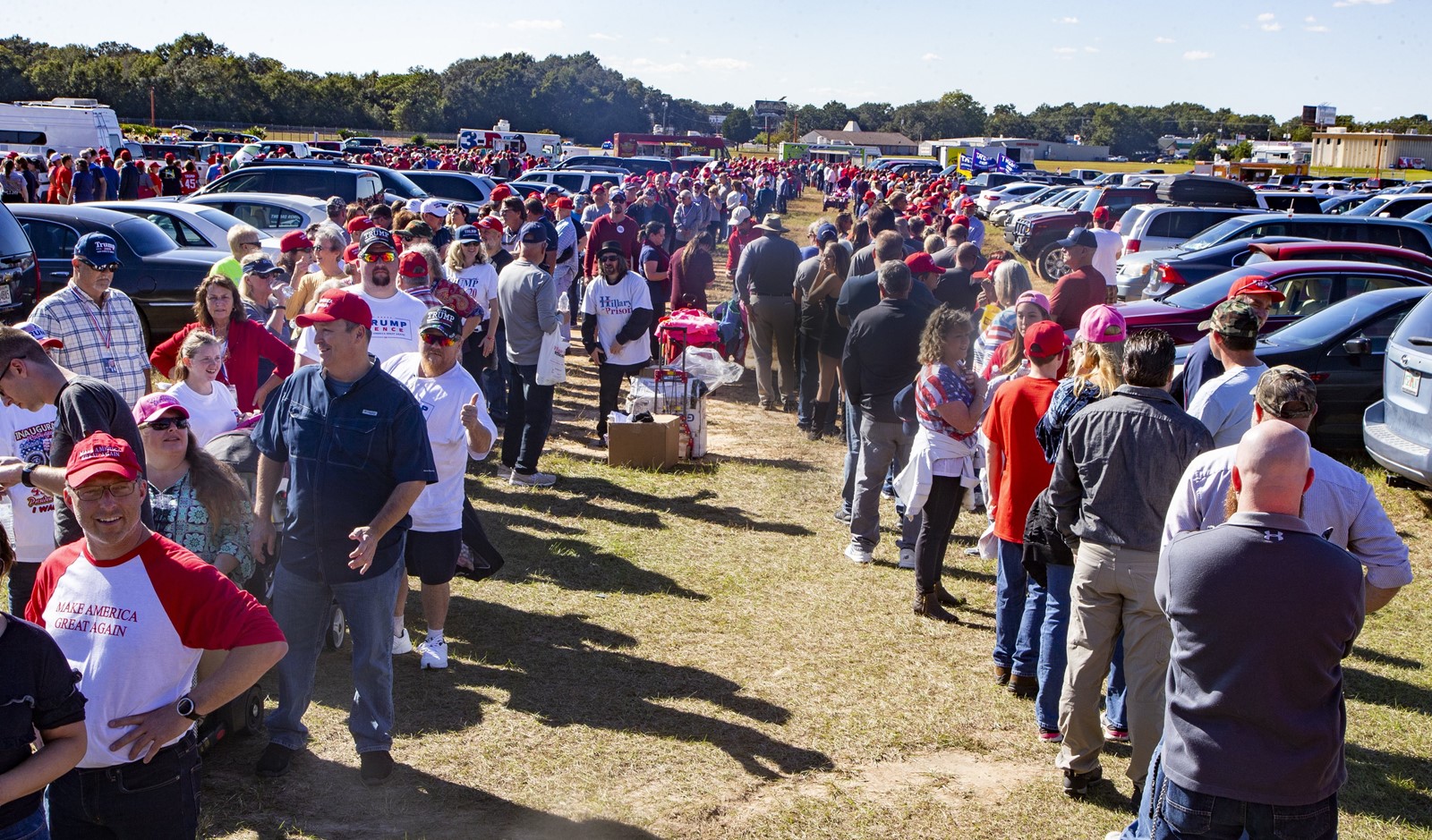 SUPPORTERS wait for President Trump’s rally Saturday in Pensacola, Fla. With the midterm increasingly a referendum on his tenure, Trump has returned to the nativist themes that have been his political calling card. (Mark Wallheiser Getty Images)
PREVIOUS IMAGE

Swamped by a tidal wave of Democratic cash, Republicans entered the final 72 hours of the midterm campaign scrambling to preserve their slim Senate majority as a bulwark against the increasing prospect of a Democrat-run House.

Needing to gain 23 House seats for control, Democrats were burrowing deep into once-safe Republican territory, from the suburbs of Philadelphia, Minneapolis and Houston to California’s historically conservative bastions of Orange County and the Central Valley. The most optimistic GOP scenarios had the party hanging on to its majority in the 435-member chamber by a whisper-thin margin.

In the battle for the Senate, it was Democrats who were on the defensive, fighting to protect besieged incumbents in half a dozen states — Florida, Indiana, Missouri, Montana, North Dakota and West Virginia — that Donald Trump carried in 2016, in some cases by commanding double-digit margins. Republicans hold a 51-49 Senate majority; 35 of the seats are on Tuesday’s ballot.

Two years after sending Trump to the White House, Americans were rendering their first electoral verdict on his performance, with the early returns in many states suggesting keen voter interest and a significantly higher-than-normal turnout for a midterm election. By late Saturday, more than 33 million Americans had already cast their ballots.

Signs pointed to a harsh judgment.

“The truth is people aren’t in love with either party,” said Mark Mellman, a veteran Democratic pollster working with candidates in more than a dozen races across the country. “But they see the Republicans in power, and they’re not satisfied with the way Republicans are running Congress. They’re not satisfied with the way Trump is running the presidency, and that helps Democrats.”

Ignoring voices within his own party, Trump has used his presidential megaphone to end the campaign on a dark and sinister note, skipping past good economic news and summoning the xenophobic and nativist themes — wall off Mexico, end birthright citizenship — that have been his political hallmark.

“I can only go for four or five minutes with that stuff, and then the crowd says ‘I love you’ and they start dwindling off,” Trump said at an airport rally Saturday in Montana, referring to Friday’s strong employment report. “But what I do is I talk about some problems that we have…. We have a problem at the border. We have a problem with illegal immigration.”

Along with gains in the House, which they last controlled in 2010, Democrats were counting on winning a number of governors’ offices, narrowing a significant GOP edge, and replenishing their ranks in state legislatures after years of devastating losses under President Obama.

In California, the fulcrum in the fight for control of the House, both sides agreed that the most hotly contested races in the San Joaquin Valley, the high desert north of Los Angeles and the Orange County suburbs were too close to call.

At least half a dozen of California’s 53 House seats appeared to be in play in the final weekend of the campaign, thanks in no small part to an unprecedented torrent of campaign contributions.

In all six competitive races, Democratic challengers have out-raised their Republican opponents, some of them sitting members of Congress, by margins of 2 to 1 or a great deal more.

“If you had told me a year ago this is how much money Democrats had, I would have laughed at you and told you that you don’t know what you’re talking about,” said Corry Bliss, executive director of the Congressional Leadership Fund, a political action committee aligned with House Speaker Paul D. Ryan (R-Wis.).

The organization, the largest outside group supporting Republican candidates, has collected close to $160 million — a huge increase in its fundraising performance — and is still being outspent in 45 of 51 contests, Bliss said, including the six it targeted in California with $25 million.

In all, candidates and their partisan allies are expected to spend more than $5 billion nationwide, an increase of more than $1 billion from the 2014 midterm, according to the Center for Responsive Politics, which tracks the flow of campaign cash.

Democrats nationally have far out-raised Republicans, a remarkable feat for a party out of power in Washington and a financial testament to the fervor of the anti-Trump opposition.

Though raking in vast sums of money is no guarantee of victory, the cash advantage has allowed Democrats to greatly expand their target list, forcing the GOP to abandon candidates — among them Diane Harkey in northern San Diego County — while scrambling to save incumbents in Kentucky, North Carolina and other red redoubts that once seemed beyond Democratic reach.

Still, burned by Trump’s victory and their crushing disappointment in 2016, Democrats were wary of overconfidence.

“Almost all of these races in the swing districts, or even the slightly Republican districts, they are all very, very close,” said Illinois Rep. Cheri Bustos, a member of the Democratic House leadership.

The key, she said, would be the effort candidates expend to make sure their supporters cast their votes: “Do we have a good enough ground game?”

Elections at the midpoint of a president’s four-year term have historically been a referendum on the incumbent, and Trump has made this one all the more so, in both word and deed. “I am on the ticket,” he routinely proclaims at political rallies, stating his import as party leader more explicitly than any of his recent predecessors.

Trump’s schedule in the final days of the campaign — 11 rallies in eight states he carried in 2016 — was entirely consistent with his approach to the presidency, which has focused on stoking his base of support with very little effort to broaden his appeal. Indeed, the president seemed mostly interested in hanging on to the Senate, even at the expense of losing the GOP majority in the House, which he acknowledged is possible.

“We’re doing really well in the Senate, but [it] could happen,” he told supporters Friday night in Huntington, W.Va. “You know what I say? Don’t worry about it. I’ll just figure it out.”

The fight for the Senate has always favored Republicans. The GOP is defending just nine seats, compared with 26 for the Democrats, and the most competitive contests — save in Florida — are in the heavily rural, conservative-leaning states that are the foundation of Trump’s political support.

The fight for the House, by contrast, is being waged largely in cities and their surrounding suburbs, which teem with legions of angry and exasperated women, young people and the comfortably-off college graduates who constitute the heart of the anti-Trump resistance.

The president’s closing argument in the campaign seemed unlikely to narrow the country’s wide chasm.

In his tweets and raucous appearances on the stump, Trump has turned the focus away from the robust economy — on which many Republicans would prefer to campaign — to an invented immigration crisis and phantom menaces.

Making his closing pitch, Trump has vowed to repeal the birthright citizenship guaranteed in the Constitution, pledged to deploy thousands of troops along the border with Mexico and released a misleading ad featuring an immigrant who killed two California sheriff’s deputies in 2014 while living in the U.S. illegally. (Though the ad blames Democrats, the immigrant, Luis Bracamontes, last entered the country when Republican George W. Bush was president.)

While Trump’s ominous exhortations may electrify core supporters, they seem less likely to resonate with independents and other swing voters who worry more about the cost of groceries and gasoline than a bedraggled procession of immigrants hundreds of miles away.

The question, said David Winston, who does polling for the Republican leadership in the House and Senate, is whether undecided and still-persuadable voters are “thinking tweets or are they thinking policy” as they mark their ballots.

Winston would prefer the latter, but, like so much else this election season, the atmospherics of these final campaign days revolve around Trump, his actions and his rhetoric.