Amid a debate about renaming schools, a statue of the 16th president is defaced. 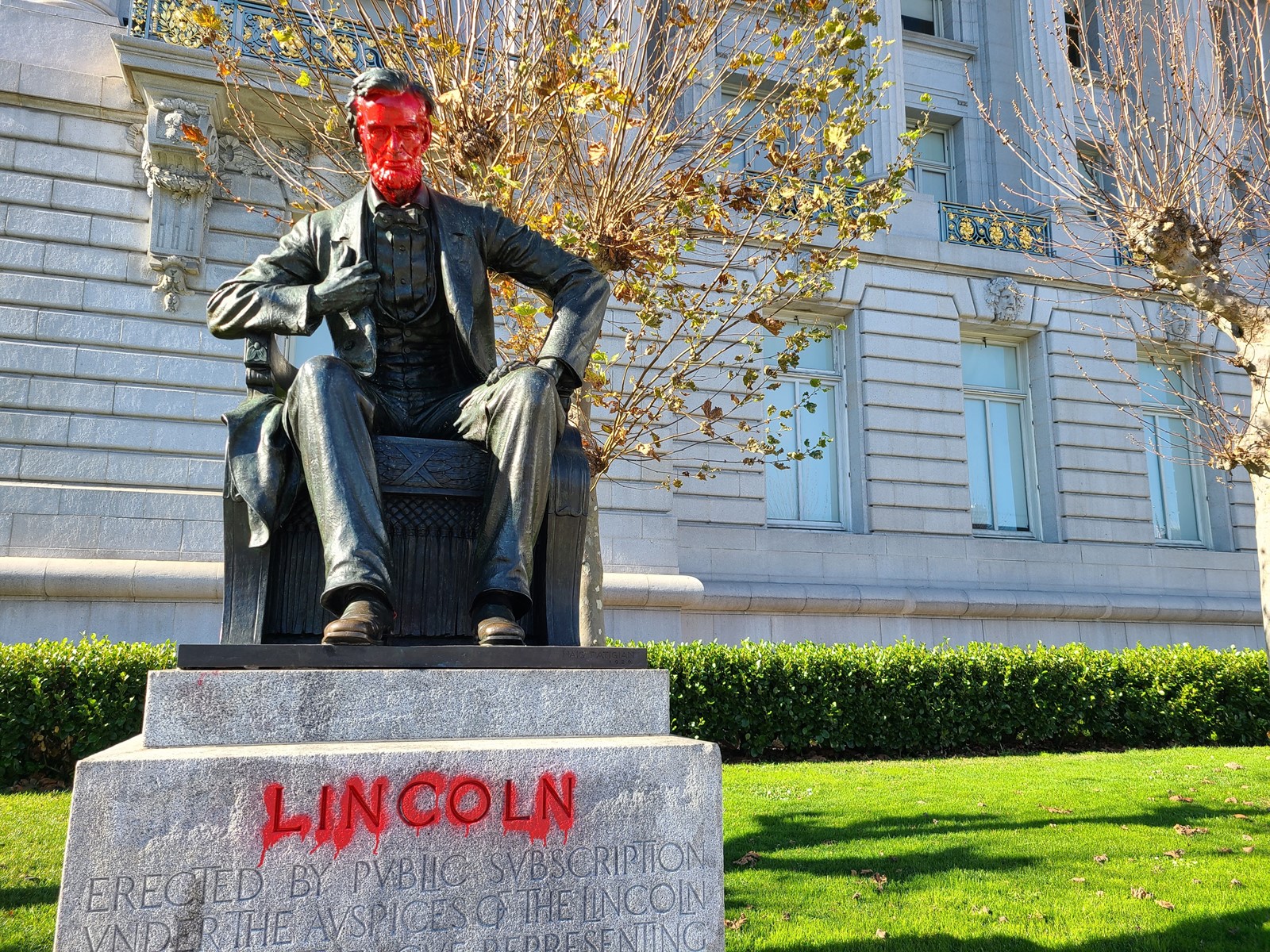 A STATUE OF Abraham Lincoln in front of San Francisco City Hall was vandalized over the Christmas weekend but has since been restored. (Christopher J. Beale)
PREVIOUS IMAGE

The statue sat like a red stain on the lawn in front of San Francisco City Hall. Abraham Lincoln’s chiseled face was covered in paint, his etched name highlighted in the bloody color at the base of the monument.

As San Francisco, like many parts of the country, grapples with how best to memorialize historic figures, the statue of the 16th president sat red-faced — literally — in front of the government building the day after Christmas.

“The damage to the statue was superficial,” Crowley wrote in an email. “President Lincoln has been restored.”

But questions about a San Francisco-size blot on Lincoln’s legacy remain.

Some social media users opined that the vandalism intentionally coincided with the 158th anniversary of the Dec. 26, 1862, hanging of 38 Native Americans on the president’s watch. According to the Associated Press, a U.S. military commission sentenced 303 Sioux fighters to execution, following the 1862 Dakota War, also known as the Sioux Uprising. Lincoln reportedly reviewed each case and decided there was evidence to convict 38 of them. The sentences of the remaining 265 were commuted.

Regina Brave, an elder in the Oglala Sioux Tribe, said the event’s history had been handed down among her people for generations. Living in South Dakota as an activist, the 79-year-old said she once supported the idea of tearing down Mt. Rushmore. But ultimately she concluded that monuments ought to remain intact, saying they are a useful way to remember bygone leaders — and their faults, including Lincoln’s.

“Hey, he’s dead,” Brave said. “But it’s worth remembering. That’s part of our history — to remember these events.

“We’re not going around tearing down statues and defacing statues,” she continued. “We want people to know this. The only thing we want is to have the exact history to be written.”

The defacement of Lincoln’s statue in San Francisco, which Crowley said was reported about 1 p.m. Saturday, follows national attention generated by a committee recommending the renaming of 42 schools, including Abraham Lincoln High School.

Committee members flagged for removal the names of prominent and historic figures who had alleged ties with slaveholding, colonization or oppression. The list includes Dianne Feinstein Elementary School and Balboa High School.

“Abraham Lincoln is not seen as much of a hero at all among many American Indian Nations and Native peoples of the United States, as the majority of his policies proved to be detrimental to them,” one committee member wrote in summarizing the rationale for the renaming efforts.

Mark Sanchez, president of the San Francisco Board of Education, proposed forming the renaming committee in 2018 and said he stood behind the group’s work. Though the overwhelming feedback he has received has been “to not cancel Abraham Lincoln,” Sanchez said he was inclined to follow the committee’s recommendation to change the name of the high school bearing his moniker.

“I have a huge respect for him,” Sanchez said of the 16th president, noting that he attended Lincoln Middle School in Santa Monica. “Just like any historic figure, Abraham Lincoln is a mixed bag. There’s certain things that he did that diminished others. But he also obviously brought the end of slavery in the United States. He was the pivotal figure in that.”

In its explanation for recommending the name change, the committee cited corruption in the original U.S. government office for Indian affairs, removal of Native Americans and the passing of legislation that led to the loss of life and land for Indigenous people.

Sanchez said he welcomed the possibility of changing his mind when the school board voted in January on the name changes. Schools where the changes are approved will have until April to provide alternative names, he said.

The committee’s recommendations have prompted plenty of blowback, including from Mayor London Breed, who called the timing of the discussion “offensive” given that students were still physically out of the classroom during the COVID-19 pandemic. The San Francisco Historical Society has opposed the effort. Even President Trump weighed in, retweeting a Daily Caller article about the recommendation and calling it “Crazy!”

Lance Burton attended Abraham Lincoln High School from 1965 to 1967. He learned about the debate over his alma mater from a Facebook group.

“If San Francisco wants to be noted for that — having changed the name of someone whose name is on the document that emancipated the African Americans,” said Burton, founder of Planet Fillmore Communications, that’s not something “I want associated with my city.”

He said Lincoln’s decisions might not have been entirely “altruistic,” but the president earned a holiday for his birthday. The city should introduce a curriculum to deepen students’ understanding of the history of the Civil War, Burton said, not focus on the name of a high school.

“To me, it was nonsense. It just seems like another device to divide people,” said Burton, who is a member of the San Francisco African American Historical & Cultural Society. “There’s a whole lot more that people could be getting a whole lot more upset about related to the slave trade and oppression.”

The story of the name changing has reverberated across the country, as other communities contend with how best to acknowledge historical figures in today’s fraught political climate.

Lucas Morel, a Lincoln scholar and professor of politics at Washington and Lee University, has publicly advocated to keep Confederate Gen. Robert E. Lee in the name of his workplace. He said in an email that San Franciscans were going too far in trying to distance themselves from Lincoln, “the greatest political champion of the very rights they currently enjoy.”

“Discovering what they perceive to be a glaring defect in someone long associated with freedom unfortunately eclipses the tremendous good Lincoln achieved in saving this nation at a time when all other practical alternatives would have been far worse,” Morel wrote.

This is not the first time the Bay Area has wrestled with school names.

In 2016, the San Francisco Board of Education president sought to change the names of any of the city’s schools titled after slave owners such as George Washington and Thomas Jefferson. Neither George Washington High School nor Jefferson High School changed its name, but the board did vote unanimously to cover up a mural at Washington High that depicted Black slaves and dead Native Americans in Colonial-era scenery.

In 2019, Dixie School District in Marin County changed its name to Miller Creek School District after a long debate about whether the district should distance itself from a name some said was associated with the Confederacy and slavery.