Bolton could flesh out Ukraine story

Ex-national security advisor may yet appear to testify in impeachment hearings about Trump’s actions. 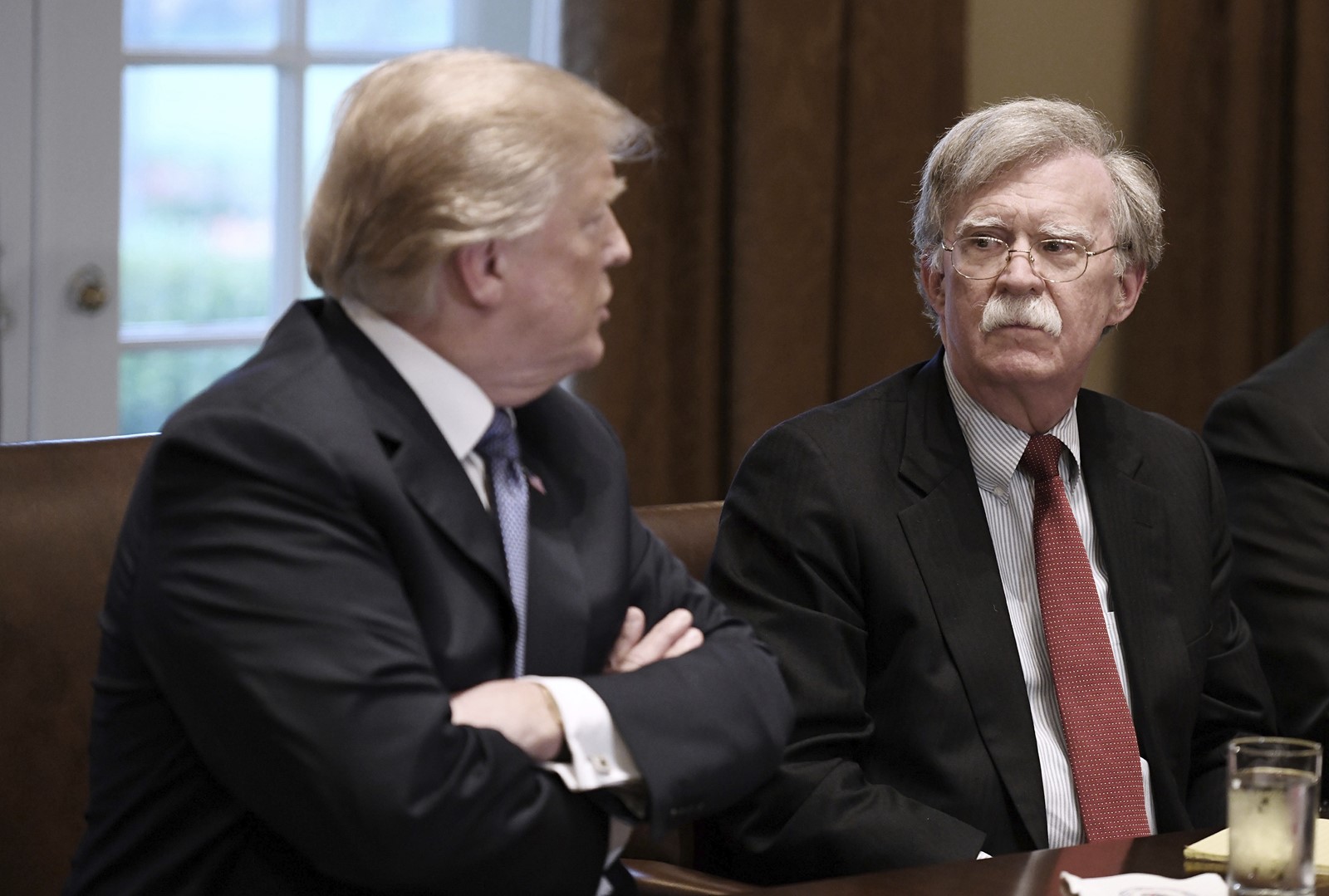 JOHN BOLTON had a difficult relationship and deep disagreements with President Trump on some policy issues, but he’s also known as a fierce partisan. (Olivier Douliery Abaca Press)
PREVIOUS IMAGE

Former national security advisor John Bolton appears to be dangling the possibility of testifying late in the impeachment process about President Trump’s actions regarding Ukraine, potentially providing an account that could fill in crucial gaps in the current record.

Bolton’s name frequently popped up in the last two weeks of hearings before the House Intelligence Committee. Administration officials described his disgust at the pressure campaign that Trump’s lawyer, Rudolph W. Giuliani, had set in motion to push Ukraine into publicly announcing investigations into Trump’s Democratic rivals.

At one point, Bolton reportedly instructed one of his top aides, Fiona Hill, to report the scheme to White House lawyers and referred to it as a “drug deal.”

Over the last two weeks, as Hill and other officials subpoenaed by House Democrats stepped forward to testify, Bolton, who has signed a book deal about his time in the White House, was notable for his absence. But people familiar with his thinking note that the process is far from finished.

“Bolton understands that the impeachment process is only in the seventh-inning stretch of a one-run ballgame — there is much more that is going to happen,” said one such person, speaking on condition of anonymity. “He now has a lucrative book deal, and he will do everything in his power to maximize public anticipation and revenues from the book.”

Although the Intelligence Committee has no additional hearings scheduled, Rep. Adam B. Schiff (D-Burbank), the chairman, has not ruled out the possibility of additional sessions.

Moreover, Democrats might be able to call Bolton as a witness in a Senate impeachment trial even if he hasn’t testified earlier. Republicans could also call him as a witness if they felt he might exonerate Trump.

A longtime Republican lobbyist close to Bolton noted that the former national security advisor has both legal and political factors that could cause him to delay testifying.

“He’s got something to say, but he also wants to stick around in the party,” the lobbyist said. “If he’s ordered by a judge, it’s harder for Trump world to say he did this on his own because of some grudge.”

Unlike other senior administration officials who have declined to testify, including acting White House Chief of Staff Mick Mulvaney and Secretary of State Michael R. Pompeo, Bolton has sent repeated signals that he has stories to tell.

“Glad to be back on Twitter after more than two months. For the backstory, stay tuned,” he tweeted.

Later in the day he wrote a second message: “Re: speaking up — since resigning as National Security Advisor, the @WhiteHouse refused to return access to my personal Twitter account. Out of fear of what I may say? To those who speculated I went into hiding, I’m sorry to disappoint!”

The White House may indeed fear what Bolton might say. The former national security advisor has a reputation as a savvy bureaucratic warrior and could have extensive information about what took place within Trump’s inner circle. He and Trump had a difficult relationship and deep disagreements on some policy issues.

Bolton indicated with “body language that there was nothing which we could do about it. And he then, in the course of that discussion, said that Rudy Giuliani was a hand grenade that was going to blow everyone up,” Hill testified.

Democrats remain deeply skeptical of Bolton, who has long been known as a fierce partisan.

“I don’t think we’ve had communication since his lawyer informed us that if we subpoenaed him he would sue us in court,” Schiff said in an interview Friday. “So that doesn’t sound like someone who is particularly willing to testify. And of course we invited him to testify and he didn’t show up.”

“If he continues to refuse to testify and waits to put whatever it is he has to say in his book, it will be very difficult to explain why Fiona Hill did her duty but he did not,” Schiff added.

Other Intelligence Committee members were blunter.

“The committee will not be used as an implement to help John Bolton promote his book,” said Rep. Jim Himes (D-Conn.).

The House has not subpoenaed Bolton and withdrew a subpoena for Bolton’s deputy, Charles Kupperman, who took the unusual step of filing a federal lawsuit to ask a judge to weigh in on whether the subpoena took precedence over a White House order not to testify.

In his letter to House lawyers, Cooper, who represents both Bolton and Kupperman, said the two men wanted to “get a definitive judgment from the judicial branch determining their constitutional duty in the face of conflicting demands of the legislative and executive branches” before complying with any subpoena.

Democrats have been adamant that they do not want to slow down their impeachment proceedings to wait for drawn-out court hearings, which they see as an effort by the White House to buy time.

“They keep taking it to court, and no, we’re not going to wait till the courts decide,” House Speaker Nancy Pelosi (D-San Francisco) said at a news conference Thursday when asked about Bolton and other potential witnesses who have not yet testified.

“That might be information that’s available to the Senate in terms of how far we go and when we go,” she said. But, she added, “we can’t wait for that because again, it’s a technique. It’s obstruction of justice. Obstruction of Congress.”

Calling Bolton to testify in a Senate trial might avoid a court fight. The Constitution specifies that impeachment trials of a president are presided over by the chief justice of the Supreme Court. And if Chief Justice John G. Roberts Jr. rules that Bolton should testify, that might resolve the legal issues.

But that path might also bring additional risk since the House members presenting the impeachment case would not have prior testimony from Bolton to flesh out his account in advance.

Despite the uncertainty, Democrats might find Bolton too tantalizing a witness to pass up. Although it’s not known how much firsthand knowledge he has of Trump’s intentions toward Ukraine, he served as national security advisor for 17 months before being ousted in September and was in frequent contact with the president.

Moreover, Bolton, who was President George W. Bush’s ambassador to the United Nations, is a larger-than-life figure in Republican foreign policy circles whose testimony could have considerable impact with Republican voters.