Stress, noise, isolation are just some of the hurdles 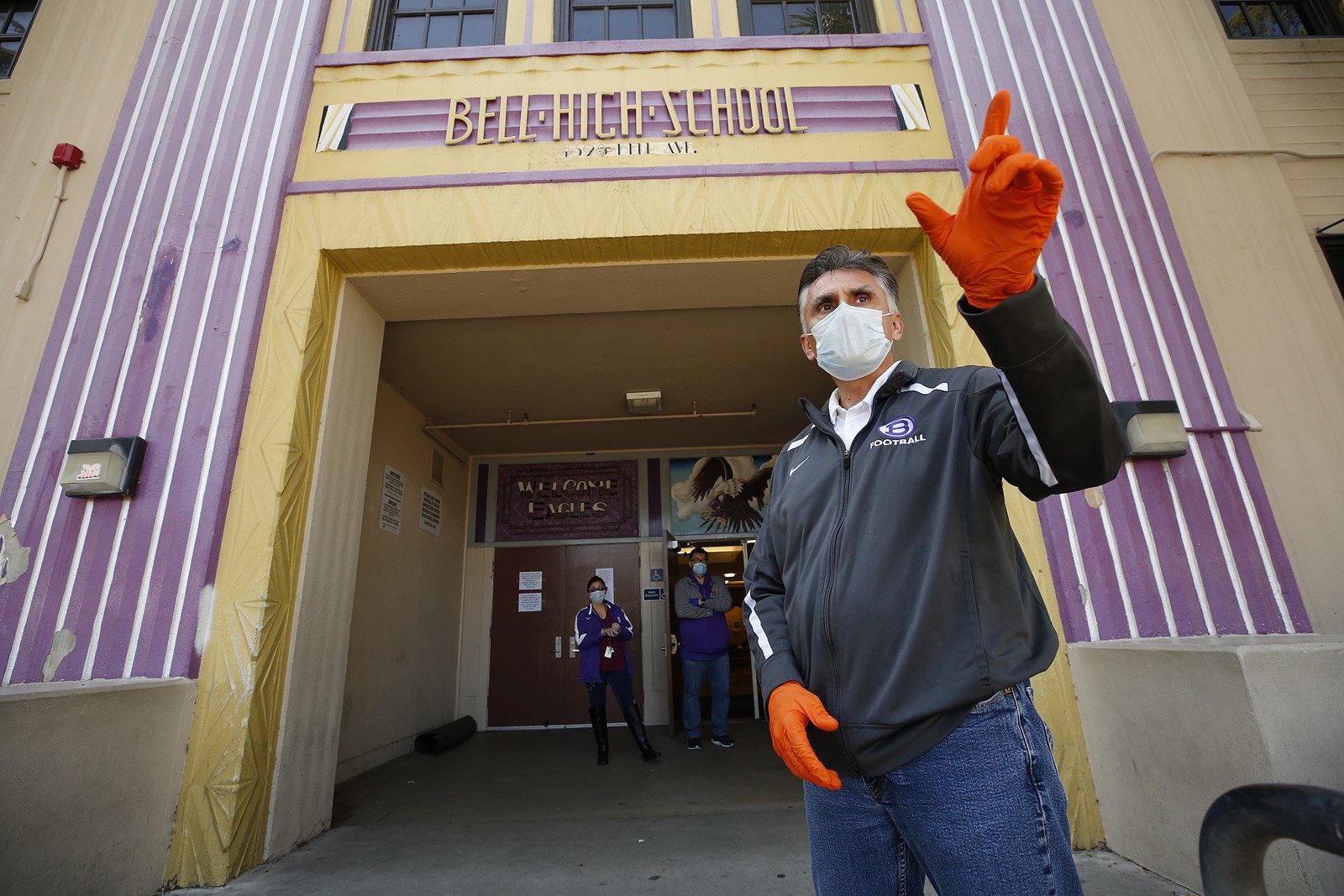 PRINCIPAL Rafael Balderas at the entrance to Los Angeles’ Bell High School, where distance learning has been too demanding and cumbersome at times. (Al Seib Los Angeles Times)
PREVIOUS IMAGE

A senior at John C. Fremont High School in South L.A., Emilio Hernandez has a class load that is about as rigorous as it gets: AP calculus, physics, design, English, engineering and government. He loves talking to his peers in English class, who make all the readings thought-provoking. He often turns to his math teacher, who has a way of drawing the graphs and walking him through derivatives and complex formulas.

Now, with a borrowed laptop from school and family crowded in the living room, he’s struggling to make school feel like, well, school. He has trouble falling asleep and finds himself going to bed later and later — sometimes as late as 3 a.m.

“Assignments that would normally take me two hours or thirty minutes are now taking me days to complete. I just … can’t focus,” he said. “I don’t have anyone giving me direction. It’s just me reading and having to give myself the incentive to do the work.”

It’s been three weeks since school districts across the state have closed their campuses as the novel coronavirus continues to sweep its way across California — sending more than 6 million students home to navigate online or distance learning. What started as an emergency scramble to provide laptops and meals for a few weeks has dramatically shifted to a longer-haulnot going back to their classrooms transformation of public education.

“The kids are ” this academic year, said Gov. Gavin Newsom, who acknowledged the burden on households with the entire state under his stay-at-home order.

For those who look to school for learning and social structure, the new reality is sinking in: There will be no school as we know it after spring break. No prom. No year-end field trips. No projects to present inside a familiar classroom. Navigating the three months left in the school year, leaders said, calls for patience and dedication from educators, self-motivation from already stressed-out students and swift actions from school districts typically mired in bureaucratic obstacles.

“These aren’t normal circumstances. It’s the most uncharted territory that we’ve been in,” said State Supt. of Public Instruction Tony Thurmond. “We’re stronger together and we can help all of our kids as we work together.”

Many are already rising to the challenge. Yet each step forward means moving past bureaucratic hurdles and cost constraints and taking on persistent problems of student poverty and stubborn achievement gaps.

Every day, hundreds of thousands of grab-and-go meals are distributed across the region for students who might not otherwise have steady access to food.

Los Angeles Unified, the second-largest school district in the nation, has already authorized the purchase of up to 200,000 computers for students to use at home and contracted with Verizon to connect households to the internet for free. In addition, a state partnership with Google is providing free Wi-Fi to 100,000 households.

At the Robert F. Kennedy K-8 campus in Compton, Principal Cecilia Madrid has personally driven to homes to drop off computers when a student or parent said they were unable to pick one up themselves.

She and her staff have so far handed out laptops to about 86% of the school’s 727 students. They’ve gone to great lengths to make sure families get whatever help they need to connect to the internet. For those who still can’t get online, the school has prepared and distributed hundreds of learning packets.

“We are really making sure that our students come first and we have everything here for our students to learn,” she said. “There’s no excuses. ‘You don’t have a device? OK, we’ll get you one. You don’t have Wi-Fi? OK, we have a packet.’ ”

She’s proud of the work her teachers and staff are doing, but recognizes that there is now a heavy burden on parents and caregivers to ensure that children keep up. She worries that videos and online lessons can’t make up for the one-on-one interactions that nurture students each day in a classroom.

“I can only wish and hope,” she said, “that everything is going to be OK.” Debra Duardo, superintendent of the Los Angeles County Office of Education, said she is unsure whether every student will receive equal access to rigorous instruction over the next 10 weeks.

“We always have kids that are behind. We’ve had a huge achievement gap that we’re trying to address,” said Duardo, whose office has an advisory and oversight role, but no direct control over local school districts. “Will this make it even worse? Probably, in some situations.”

The L.A. County Office of Education hosts a daily call with the county’s 80 superintendents, she said. Three weeks in, schools are still in Phase 1 — teaching students virtually and through paper packets, training teachers to create effective online classrooms and getting families hooked up with devices and internet access.

State funding has been provided for internet hot spots — but with so many sold out and out of stock, she said, some families may still have to wait weeks to get online.

Across the region, teachers and administrators have struggled with other barriers to access — long wait times for installation, parents without legal status who fear sharing their information, and families that can’t get permission from their landlords to install the necessary equipment.

Skyrocketing unemployment is also bearing down on families, making home schooling even more worrisome for many parents and students.

These were the words that popped up over and over again on social media and in conversations among students across Los Angeles during a recent virtual town hall with a Times reporter and Heart of Los Angeles, a nonprofit organization in MacArthur Park that provides free after-school programming for underserved youth. About two dozen students shared just how complicated distance learning can be.

Many said that their homes were crowded enough already, and that school and after-school programs were their sanctuaries — a place to escape. Others worried not only about their grades but about the well-being of their families.

Some students have been using their own savings to get food for themselves and younger siblings to avoid stressing out family members.

Closing these divides for students weighed on educators long before COVID-19 — but in some ways, the crisis has accelerated efforts to help students on all fronts.

At Los Angeles Unified, Supt. Austin Beutner is attempting an unprecedented leap for the massive district: ensuring that every student has a computer and high-speed internet access at home. Using emergency powers, he authorized spending of about $100 million for technology.

School officials started last week with sobering statistics: about 15,000 high school students were missing from online sign-ins — about 12.5%. By the end of the week, teachers and counselors had tracked down more than 6,500 of them, according to a senior district official.

At Bell High School, the initial distance-learning protocol was too demanding and cumbersome, said Principal Rafael Balderas. Students were supposed to log in and complete assignments for every subject, every day.

A regular school day had never been that constricted, so the faculty regrouped and developed a new plan: Individual course assignments would be spaced out across two days. And students would have more flexibility on when to turn in work, with Fridays left as flexible as possible.

Meanwhile, counselors and other support staff started the painstaking process of tracking down students who weren’t online to begin with.

They combed through maps and searched for neighbors who lived near the most recent address on record. Unable to walk through neighborhoods and knock on doors, they followed what leads they had and worked the phones.

Seniors were at the top of the list, Balderas said, because they might need to complete courses to graduate on time or remain eligible for college in the fall.

As for the younger students, the district is starting to size up the challenges ahead, said Alison Yoshimoto-Towery, L.A. Unified’s chief academic officer.

“As we get younger and younger, there’s more students that haven’t logged on,” she said during an update to the Bond Oversight Committee. “It wasn’t part of their previous practice.”

Many of these students have been working with paper packets sent home with students or picked up later by parents.

These stay-at-home adjustments have strained even the region’s more well-resourced schools.

At John Adams Middle School in Santa Monica, many students already have computers and internet access at home — and the district is working to support those who don’t. Teachers had started using Google Classroom in January, so students were familiar with interacting with teachers online.

But many students confided to their teachers that they do not have a quiet place at home to work and have been struggling to focus. Others said they were distraught about not having a teacher to help them — or just to talk to.

Margie Mathews, who teaches English, worries about her students’ emotional well-being and the meaningful learning experiences that might now fall through the cracks.

“Where will it show up that this two months or four months caused them to miss something that they really needed to learn?” she said. “It could be detrimental to some of them, and it’s heartbreaking to think about that.”

She recently turned the shutdown into a lesson — asking some of her students to write an autobiography that starts with a reflection on their lives now. She and her colleagues have also figured out ways to streamline and teach the essentials without making things more stressful.

She’s managed to engage almost all 147 of her students by now, but a handful are still missing.

“I’m going to find them this week,” she said, “one way or another.”